The intricately branched dragon trees (Dracaena draco) at the entrance set the mood. How I wish they grew to this size in our climate, but it's just too cold in the winter for their long-term survival.

I could, however, try to grow Dracaena draco in a large container. And at Christmas, I could underplant it with white poinsettias, just like the combo below:
⬐ The Succulent Garden was poinsettia-free, but it did sport all kinds of holiday lights, like these stars: 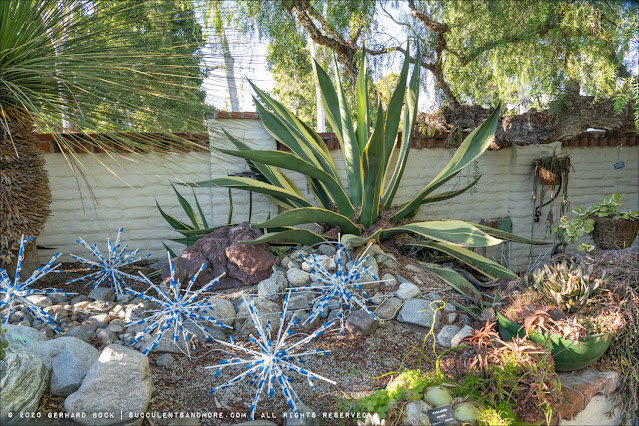 ⬐ I tried to avoid them as much as I could in my photos. This stately Agave salmiana, growing under an even more stately pepper tree (Schinus molle), doesn't need artificial lights to shine.

⬐ The golden barrel and silver torch cacti are pretty, but look closer. See the green vine? It belongs to a Dioscorea elephantipes, aka elephant's foot, a caudiciform from the arid parts of South Africa's Cape region. In this specimen, half the caudex is gone—maybe it rotted away? But the plant itself is still very much alive. 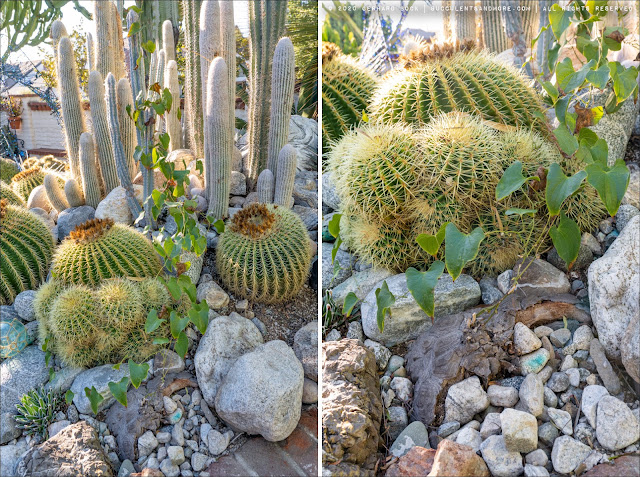 ⬐ A wider shot, with one of several towering cactoid euphorbias in the background: 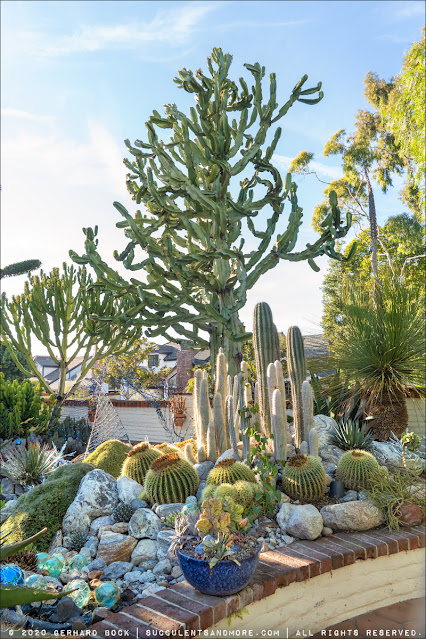 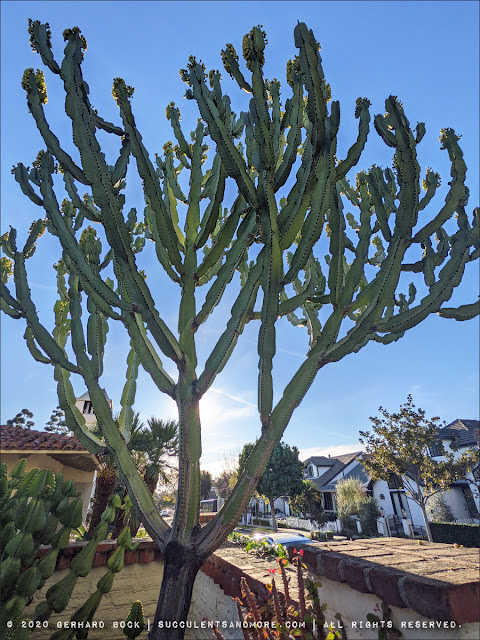 ⬐ The majestic tree aloe on the left is easier to identify: Aloidendron barberae. It's flowering... 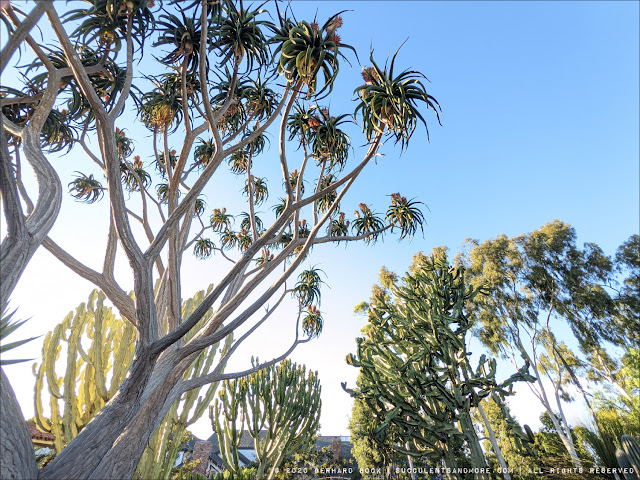 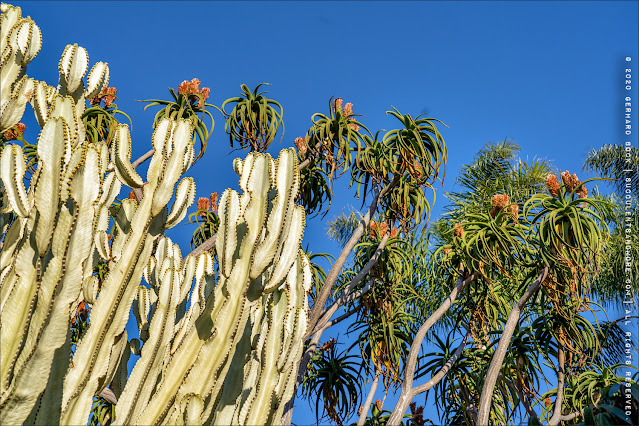 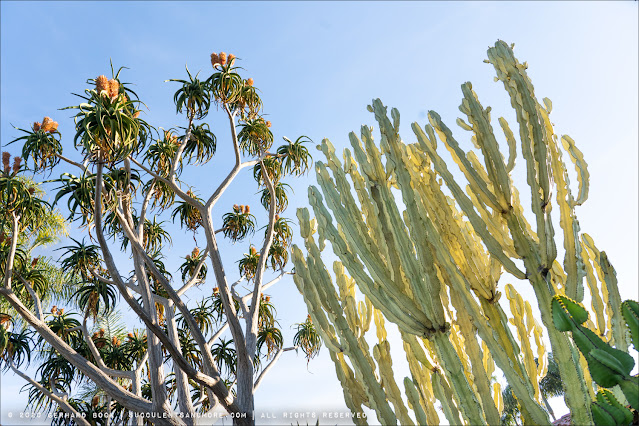 ⬐ The ghostly “cactus” next to it is Euphorbia ammak 'Variegata': 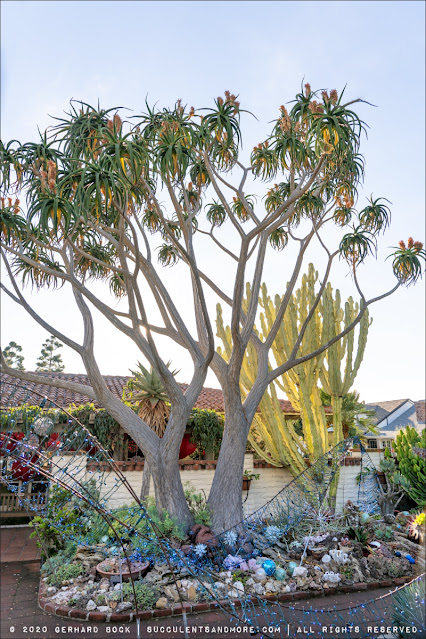 ⬐ Back to the golden barrels (Echinocactus grusonii) and silver torches (Cleistocactus strausii): 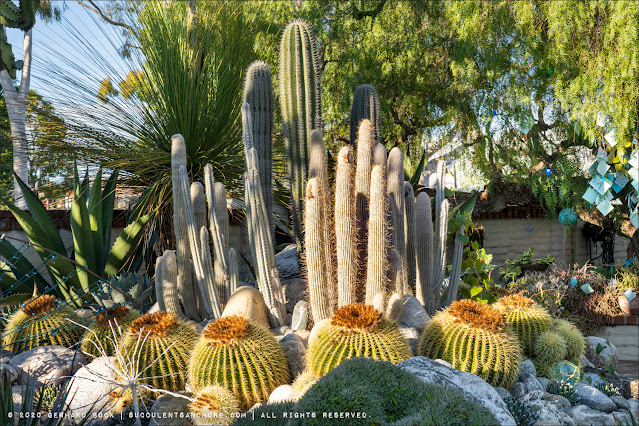 ⬐ The beds in the Succulent Garden are small, but they're filled with choice plants appearing to swim in a sea of rocks:
⬐ Several clumps of what looks like owl-eye cactus (Mammillaria parkinsonii) growing in a small crevice garden section: 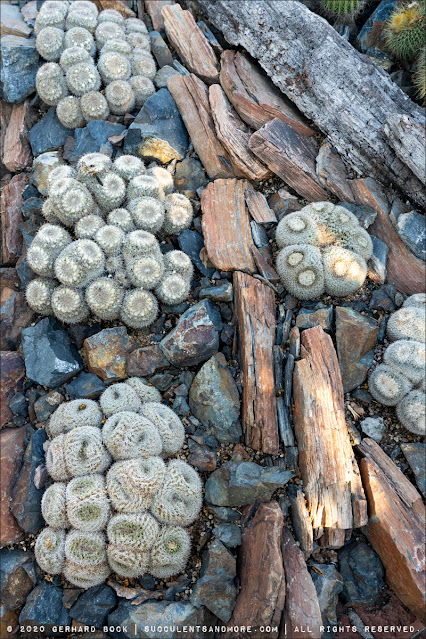 ⬐ Dyckias are favorite stand-ins for ocean creatures in under-the-sea-themed gardens. Easy to see why! 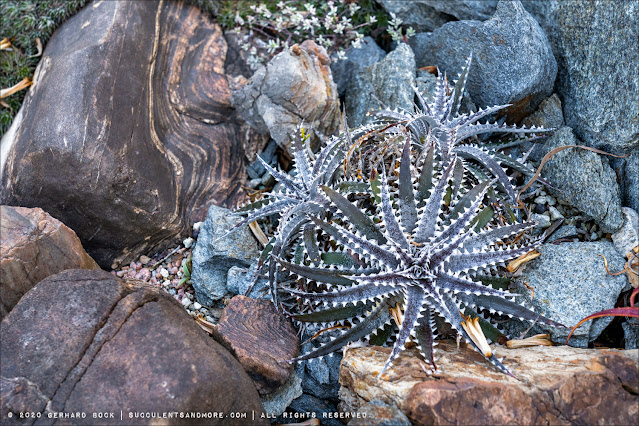 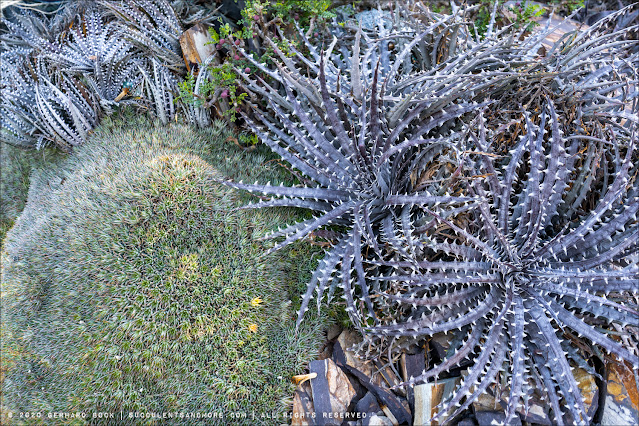 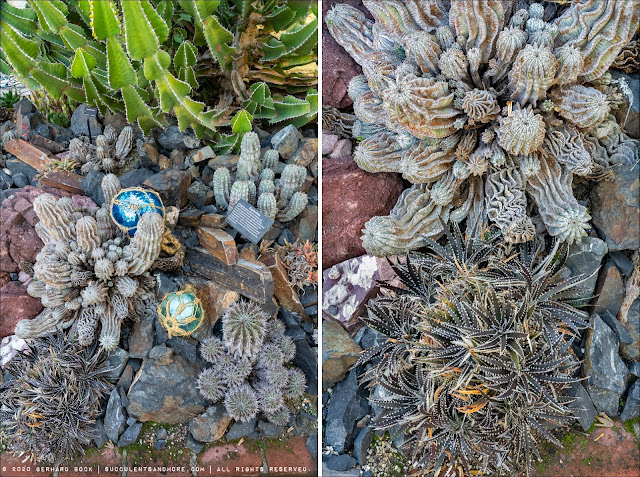 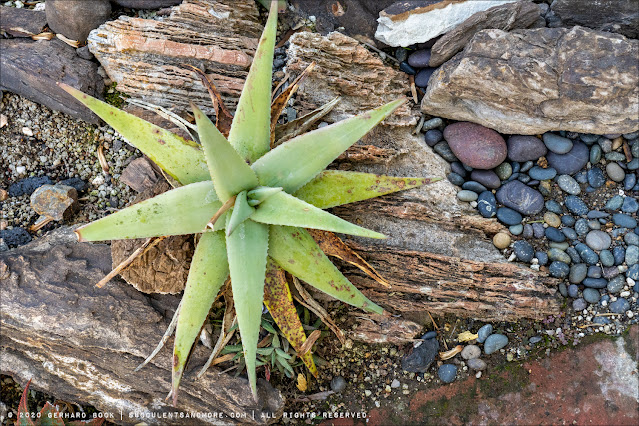 ⬐ ...especially smaller species like Aloe brevifolia on the right... 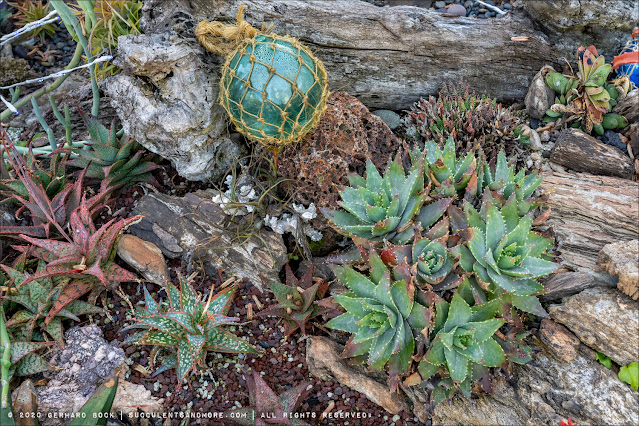 ⬐ ...and the many fancy dwarf hybrids on the market: 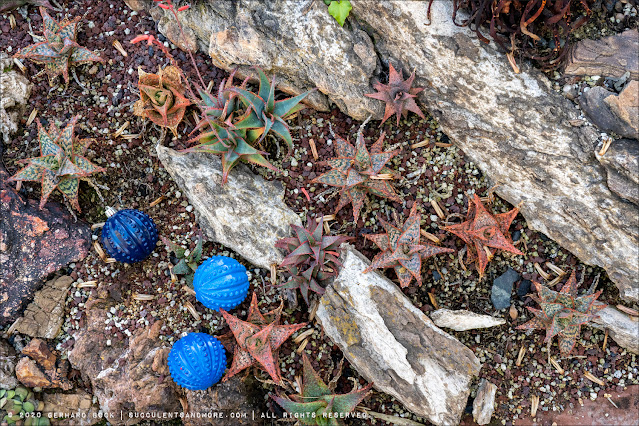 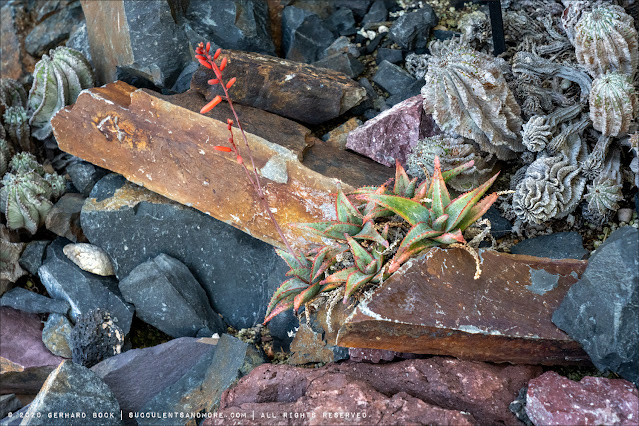 ⬐ I admit, I'm drawn to variegated Agave attenuata, and the Sherman has a perfect specimen... 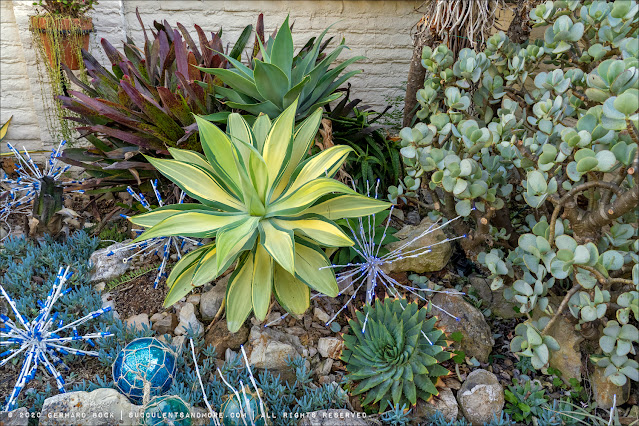 ⬐ ...growing next to an equally beautiful Aloe polyphylla that has just begun to form a spiral: 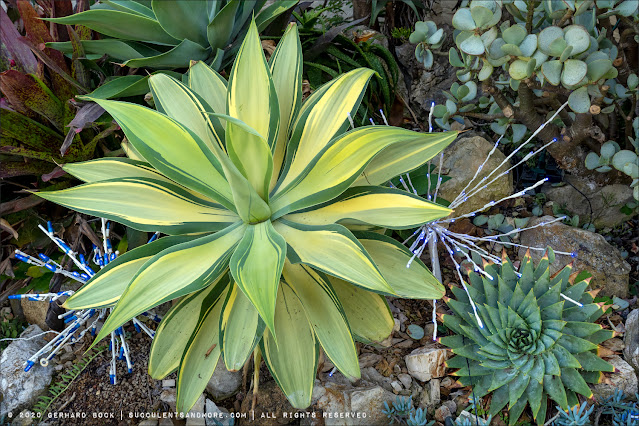 ⬐ Agave ovatifolia and Aloe rubroviolaceae growing on the edge of the famous succulent mosaic: 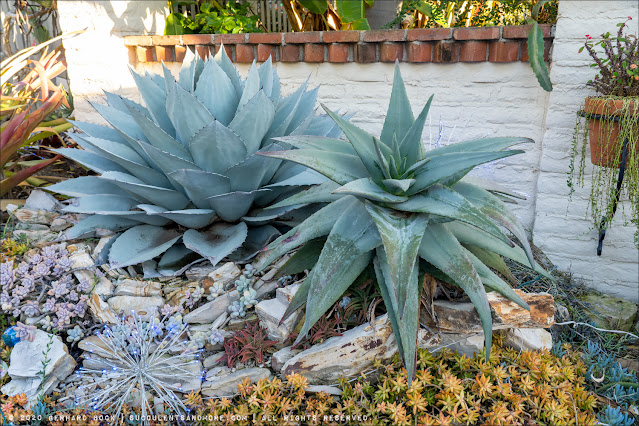 The succulent mosaic, easily the most photographed feature at Sherman Library & Gardens, was created by horticulturist Matt Maggio in 2006 when he was a horticulture student at California Polytechnic State University (Cal Poly) in San Luis Obispo. For two summers in a row he was awarded a scholarship by Sherman Library & Gardens that included a 6-week paid internship. During these internships, he helped renovate the old Cactus Garden which lacked interest and was often ignored by visitors. The overhaul expanded the scope of plantings (hence the name change from Cactus Garden to Succulent Garden) and significantly amped up the visual appeal. In a 2010 article in Pacific Horticulture Magazine entitled “A Succulent Oasis at Sherman Library & Gardens,” Matt describes the project in great detail:

To foster public appreciation of a xeric garden, we amplified the soft whispers of desert beauty. The concept was to concentrate 1,200 square miles of desert splendor into 1,200 square feet, erasing any empty voids between points of interest. Every square inch was carpeted with detail—no barren soil left at all.

Referring to the succulent mosaic in particular, Matt says:

Masses of color were critical in relating the new Succulent Garden to the overall character of the surrounding garden areas, in order to demonstrate an equal attractiveness between succulents and other ornamentals. For instance, we laid expanses of vibrant echeverias in a mosaic fashion to compliment the seas of annual color elsewhere in Sherman Gardens.

Matt also discusses the use of rocks:

[...] I reassembled a once incoherent jumble of random stones and boulders into distinct, stratified, geologic formations. Just as the plants were grouped by type, so were the mineral elements. A specific type of stone mirrored each plant pattern—agaves with granite, for instance. The Garden’s geologic diversity includes basalt, schist, slate, sandstone, mudstone, rose quartz, granite, weathered marble, and more. Some existing sandstones were unique in offering numerous pockets for planting little gems; some nooks were made usable by drilling drainage holes through the rock. In addition, an entire section of schist rubble was created from some abandoned steppingstones that had lain forgotten in the back prep area, waiting for someone like me to come along with a sledgehammer.

I highly recommend you read Matt's Pacific Horticulture article. It sheds light not only on the design process but also on the history of Sherman Library & Gardens.
Matt is now a busy landscape design and horticulture professional in the Los Angeles area, but he's still involved as the curator of the Succulent Garden, as he told me in a message. The succulent mosaic is a labor-intensive undertaking, but I think the maintenance effort pays off in spades. 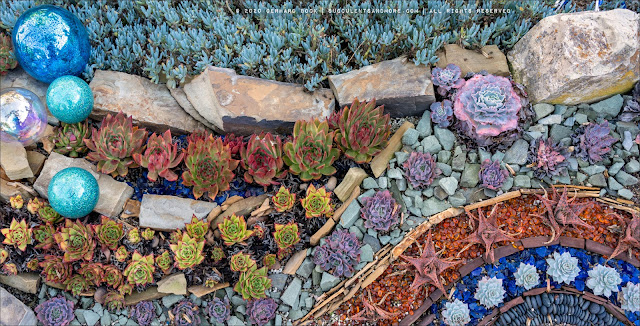 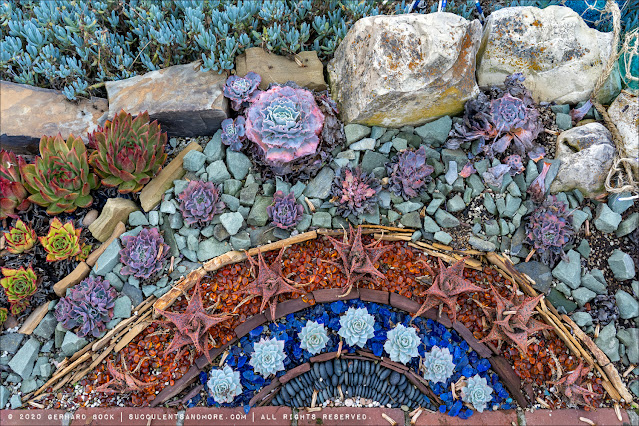 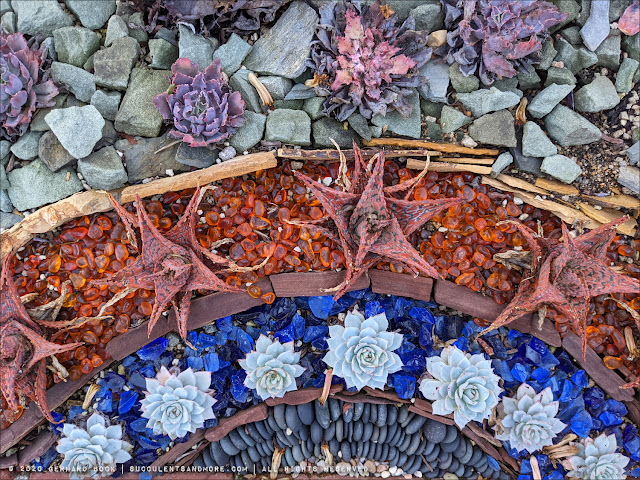 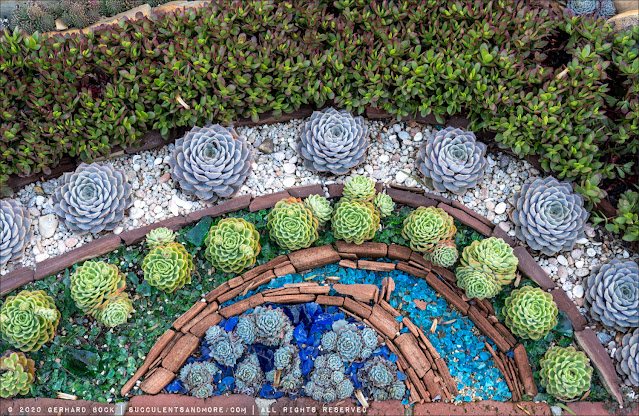 I would have taken more close-ups of the succulent mosaic because the light was good, but there were just too many holiday lights and decorations. I get it, that's what visitors want to see in December, so I won't make any Grinch-y comments. 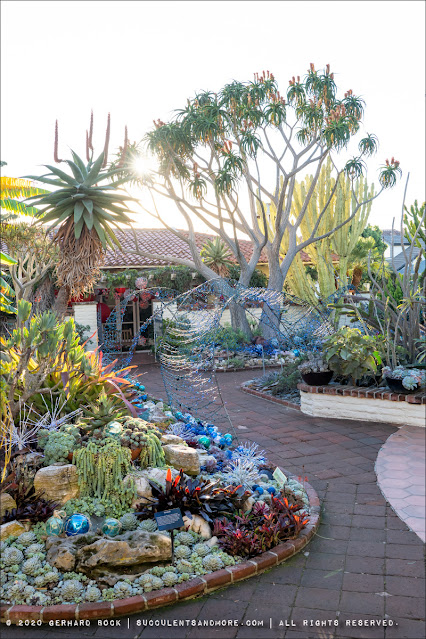 ⬐ Let's ignore the lights and glass balls and focus on rocks and succulents, this case sedums and echeverias: 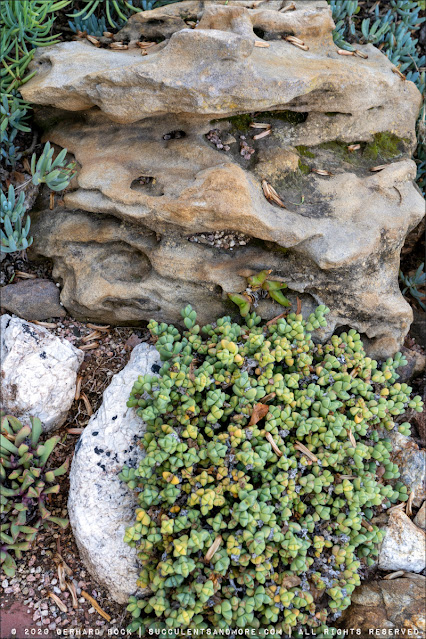 ⬐ The succulent fountain looked good. It's not a low-maintenance project either, but striking when done as well as in this example: 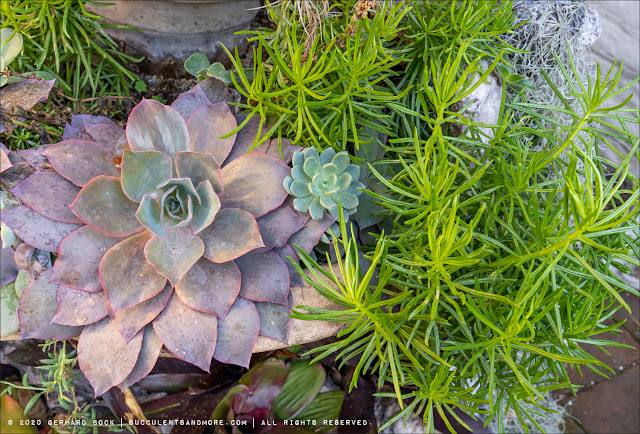 ⬐ One final shot, with the winter sun peeking through the Aloidendron barberae: 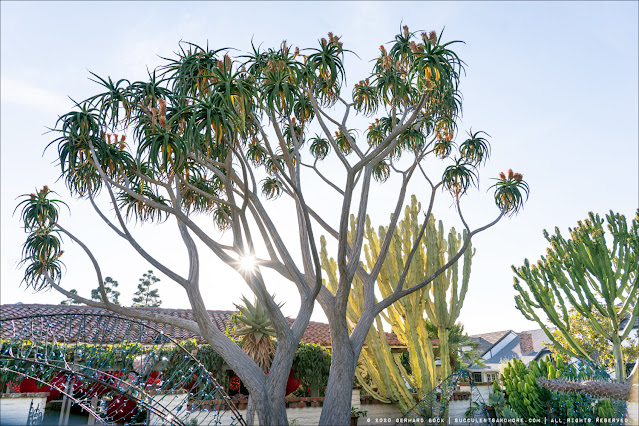 Sherman Library & Gardens is open from 10:30am to 4:00pm daily except Thanksgiving, Christmas Day and New Year's Day.