- March 05, 2020
It turns out that people aren't the only ones starting to lean at they get older. Some aloes are, too. At least this one is, and it's not even that old. It's been in the ground for just a little over four years; check out how small it was when I planted it in February 2016!

According to Arid Lands Greenhouses in Tucson, Arizona where I bought it in a 4-inch pot, Aloe globuligemma × marlothii is a “natural hybrid between two widely distributed Aloes in eastern South Africa. The seeds were collected near Lebowakgomo, South Africa.” Aloe globuligemma, the purported seed parent, is not a very large plant, but Aloe marlothii, the daddy, certainly is. And this baby here is the spitting image of its daddy, although there's still a good chance that momma's genes will express themselves in the flowers.

As baby was putting on size and weight, gravity started to pull it forward, down the slight incline it's planted on. While I don't mind the way it looks, I want it to grow upright so its stem will be straight.


I'd performed an initial intervention a few years ago, tying the aloe to a piece of rebar. However, now that the well-armed leaves are larger and heavier, a different approach was needed. A more robust solution, yes, but hardly rocket science: one person (my wife) pulling the aloe backward using an old tablecloth, and another person (me) sliding a large rock up against the stem. Planning and mental preparation had taken a year; execution a mere five minutes. That's how it often goes in the game of life and gardening.

That's not quite the end of the story. After we'd righted the leaning aloe, it was seriously impinging on the personal space of its nearest neighbor, an Agave 'White Ice'. Poor 'White Ice', it already had its hands full warding off the advances of the Cotyledon 'White Sprite' on the other side. 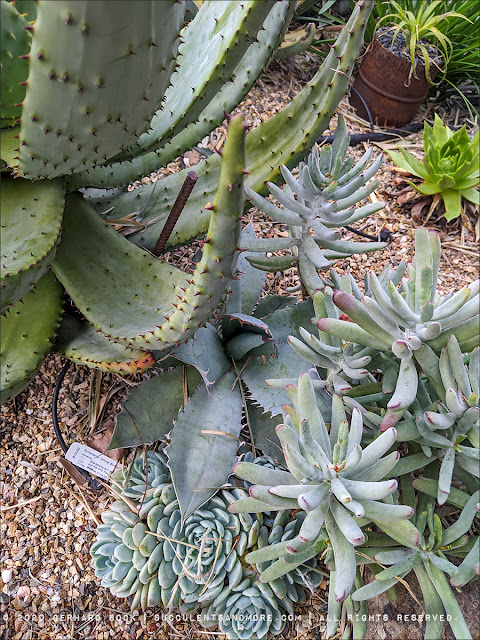 Simple solution: take out both Agave 'White Ice' and Cotyledon 'White Sprite'. I moved both of them elsewhere and planted the free space with an Agave titanota (a real titanota with a pedigree and all) and four Echeveria purposorum to complement two others already in the ground a few feet away. This echeveria species may be slow growing, but it's one of my favorites in the genus. 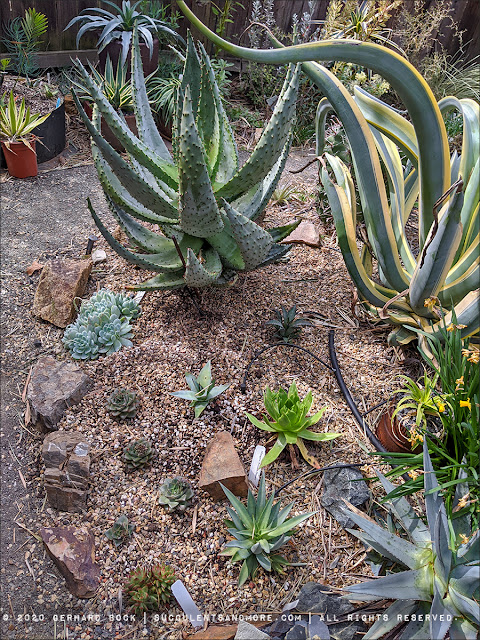 Next up for removal is the Agave pumila you see in the lower right-hand corner of the photo above. But that's a story for another post.


© Gerhard Bock, 2020. All rights reserved. No part of the materials available through www.succulentsandmore.com may be copied, photocopied, reproduced, translated or reduced to any electronic medium or machine-readable form, in whole or in part, without prior written consent of Gerhard Bock. Any other reproduction in any form without the permission of Gerhard Bock is prohibited. All materials contained on this site are protected by United States and international copyright law and may not be reproduced, distributed, transmitted, displayed, published or broadcast without the prior written permission of Gerhard Bock. If you are reading this post on a website other than www.succulentsandmore.com, please be advised that that site is using my content without my permission. Any unauthorized use will be reported.
aloes front yard renovation rocks
Location: Davis, CA, USA