- March 10, 2020
This post continues where Propping up a large leaning Aloe globuligemma × marlothii left off. In fact, in the two photos below, you can see the newly erect aloe in the upper left:

As I mentioned in my Aloe globuligemma × marlothii post, the next plant I was going to tackle was the Agave pumila nearby, seen in the center and bottom of the two photos above. This agave sustained quite a bit of damage from rot in the extra wet winter of 2016/2017 but pulled through. While I respect its resilience, its time had come—I just wasn't “feeling” it anymore the way I once had. With in-ground real estate at a premium, I've become quite brutal at rotating out plants no longer in favor.

A few targeted cuts with my trusted Root Slayer shovel was all it took to pop it out. Agaves don't generally have an extensive root system.

I knew this Agave pumila had made pups, but I hadn't expected to find quite as many: 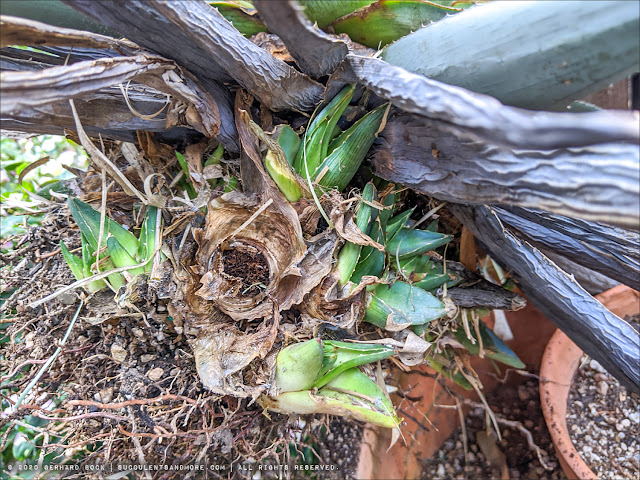 After I separated them, I counted 26 (!) offsets! The two largest went into pots of their own, the rest in a raised bed in the backyard that we'd previously used for vegetables.

In general, I think Aloe pumila is more attractive in its juvenile form. As an adult, it becomes more ordinary-looking. Agave pumila is a bit of a mystery. It's thought to be a naturally occurring hybrid between a dwarf form of Agave victoriae-reginae and Agave lechuguilla, but nobody has ever seen it flower.

Not wanting to let any grass grow under my feet, I filled the spot previously occupied by Agave pumila with a recent addition to my aloe collection, a new cross between Aloe hoffmannii and Aloe ericetorum created by genius hybridizer Nick Deinhart. Both species are from central Madagascar and have showy capitate flowers. I think it's a pretty darn good-looking plant, even without flowers!

Continuing the game of musical chairs, I planted the Agave 'White Ice' from the front yard (removed because it was being squeezed by the newly upright Aloe globuligemma × marlothii) in the backyard:

The space now home to Agave 'White Ice' was previously occupied by Agave pablocarrilloi 'Ivory Curls'. I've always like the looks of 'Ivory Curls' and I couldn't pass it up when I saw a small plug at Mountain Crest Gardens in Fort Jones, CA last August. I knew full well that this is a tropical species and that it probably wouldn't make it through our winters unscathed. I was right in that regard, but I was still surprised by the amount of damage it suffered, considering we only had a couple of nights below freezing this winter.

'Ivory Curls' is now in a pot where it can outgrow its disfigured leaves. It will either go to a new home or it will continue to live in a container so it can be moved inside on cold winter nights (we'll see how much patience for that I will ultimately have).

So there you have, another game of A replacing B and C replacing D. In my garden, few things ever stay the same!


© Gerhard Bock, 2020. All rights reserved. No part of the materials available through www.succulentsandmore.com may be copied, photocopied, reproduced, translated or reduced to any electronic medium or machine-readable form, in whole or in part, without prior written consent of Gerhard Bock. Any other reproduction in any form without the permission of Gerhard Bock is prohibited. All materials contained on this site are protected by United States and international copyright law and may not be reproduced, distributed, transmitted, displayed, published or broadcast without the prior written permission of Gerhard Bock. If you are reading this post on a website other than www.succulentsandmore.com, please be advised that that site is using my content without my permission. Any unauthorized use will be reported.
agave Agave pumila new plants our garden transplanting
Location: Davis, CA, USA