Weekend Wrapup (WeWu) for 8/26/18: a pineappled agave and a real pineapple

- August 27, 2018
Another week has gone by in a hurry so time for another Weekend Wrapup (WeWu). Remember this is a completely random collection of vignettes—things that caught my eye or that I worked on during the week (and weekend).

Everytime to go to Woodland, I drive by a clump of Agave americana in front of one of the ranchettes along the rural road I take. I posted about it before, in February 2011. The clump is much smaller now but it's still there. Right now, this rather strange looking specimen is flowering: 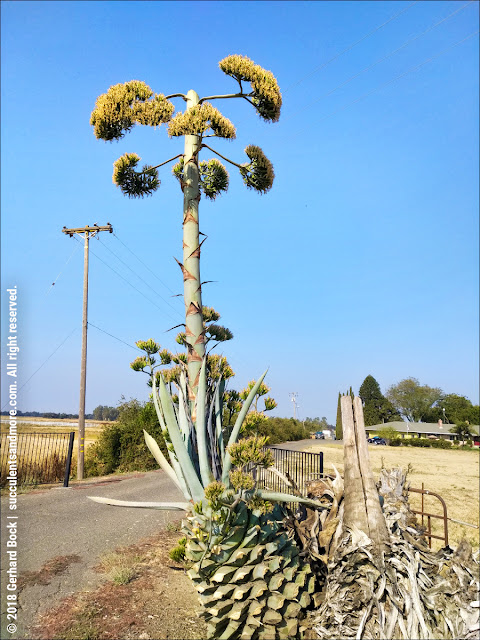 Not only has this Agave americana been pineappled to within an inch of its life, they also chopped off the flower stalk as it was emerging. Not that it stopped it, but it's much shorter than it would otherwise be.

On Saturday I visited three gardens in the Walnut Creek area as part of the 2018 Local Garden Tour organized by the Ruth Bancroft Garden. I'll have separate posts about the gardens soon but I want to show you some interesting things I spotted on the way there.

How about an Airstream trailer hidden behind a prickly pear hedge? 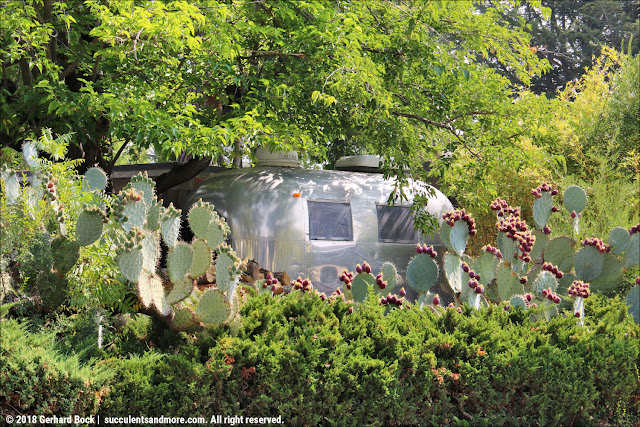 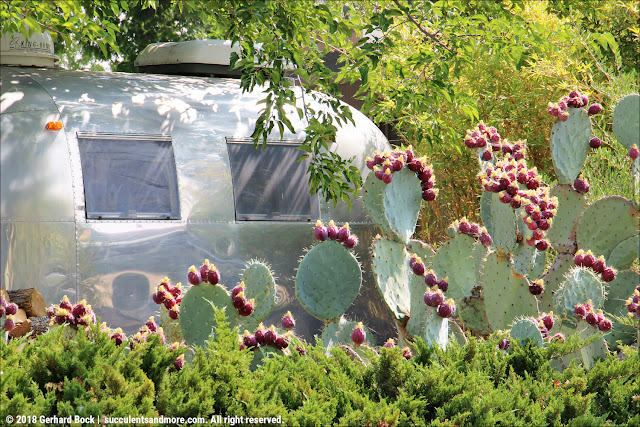 There's even some bamboo! 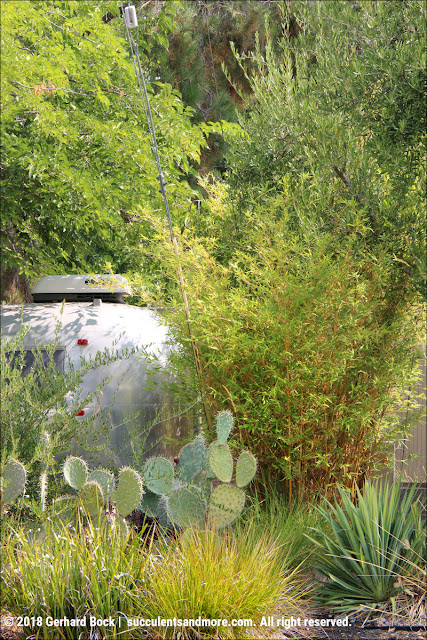 Or this 1970s ranch-style house with a small desert garden and a beautiful Agave weberi?

Or an Agave americana taller than a mail truck? 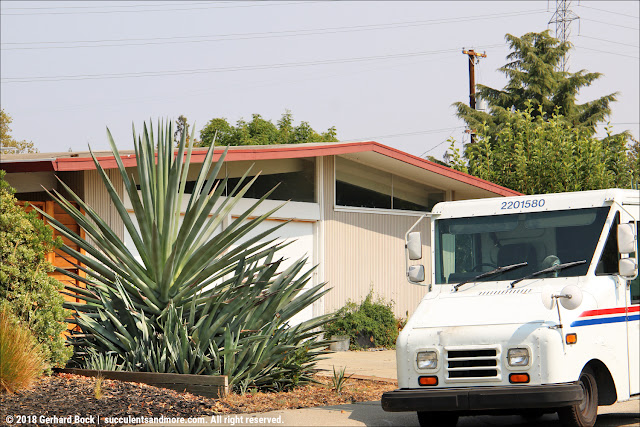 Even though it was a busy week at work, I got a few small projects done in the garden. This poor Agave 'Royal Spine' (Agave macroacantha × victoriae-reginae), which sits on top of the front yard fence, definitely needed a larger pot. See the pup coming out the drainhole? 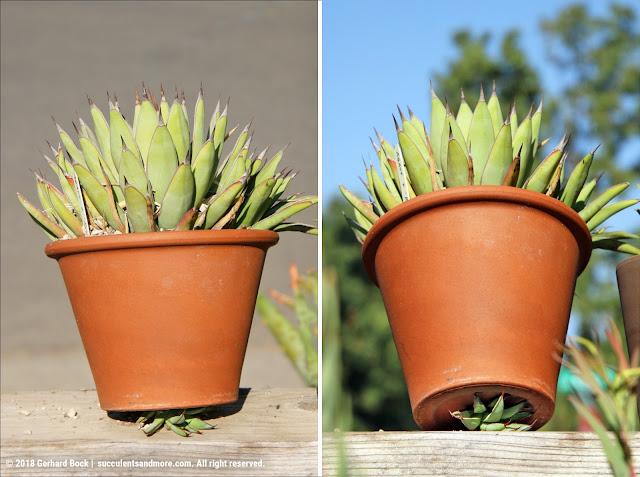 Unfortunately, I had to sacrifice the drainhole pup to get the rest out of the pot (I didn't want to break the pot). Here's the mother plant in its larger home: 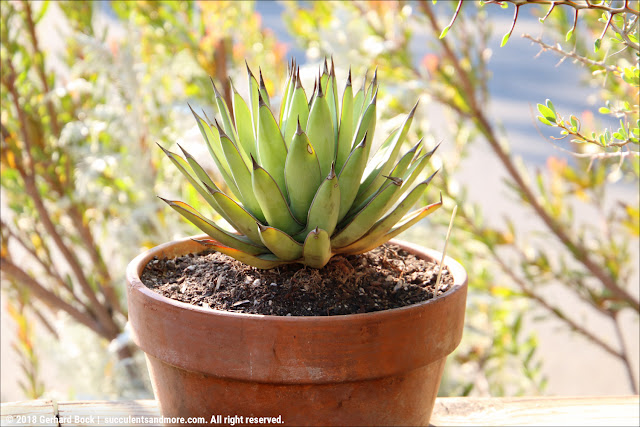 And here are the four pups I pulled off: 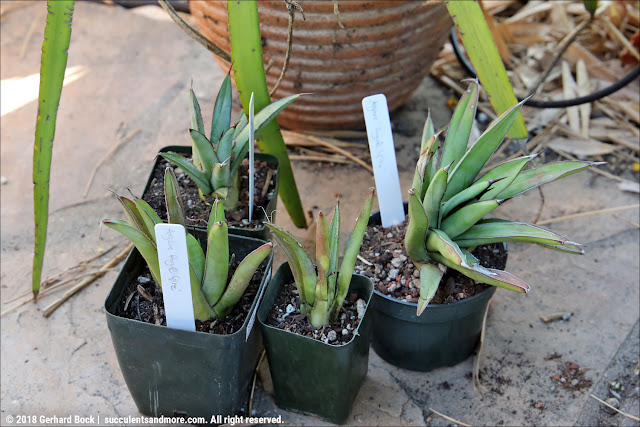 Agave × leopoldii 'Hammer Time' (Agave filifera × Agave schidigera) had been living in the same small pot for years, baking in the heat on top of the front yard fence. While that might have stunted its growth, it brought out a range of pinks and reds that I really like: 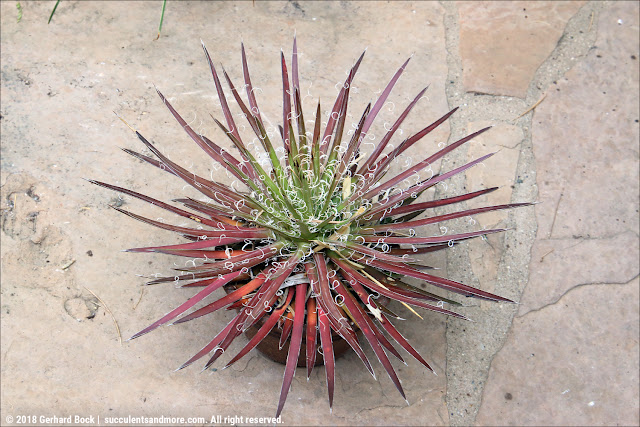 But it was time for a change, so I planted it in the larger of the two succulent mounds in the front yard: 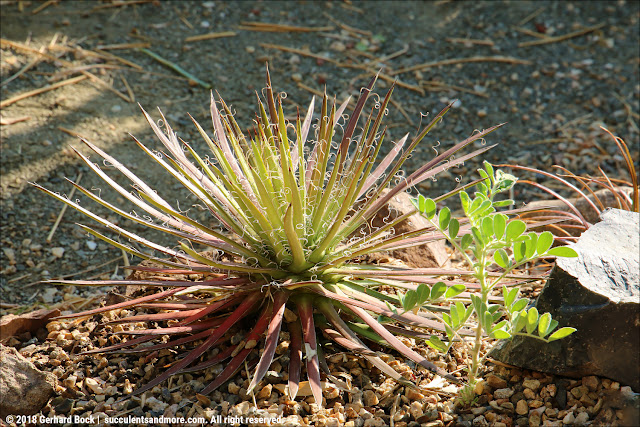 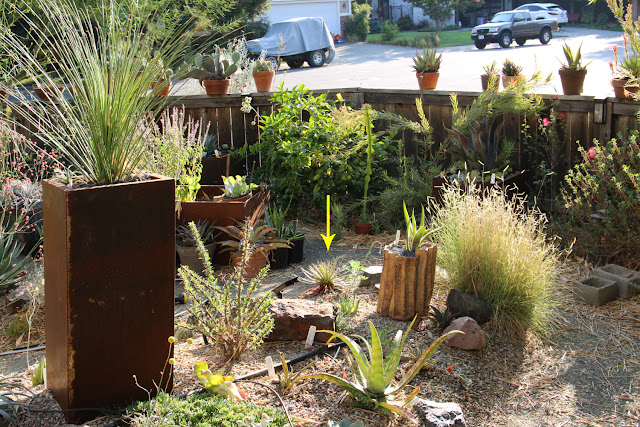 I also moved Mangave 'Kaleidoscope' into a spot where it gets more sun to bring out its purplish stress colors. It's planted in a Susan Aach container that I brought home from the 2018 Succulent Celebration at Waterwise Botanicals in San Diego. 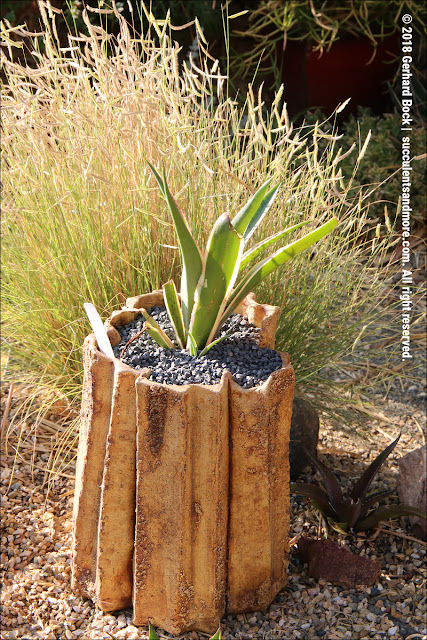 And a large cutting from a "real" aloe vera (Aloe barbadensis), received as a freebie at one of the gardens I visited in Walnut Creek on Saturday:

While digging holes for new plants earlier in the summer, I severed two soaker hoses in the backyard. No wonder some plants were beginning to look thirsty! I decided to try sprinkler hoses; they emit a fine spray every 6 inches. I'm hoping this will cover a wider area than the soaker hoses did. I'll let you know in a future post. 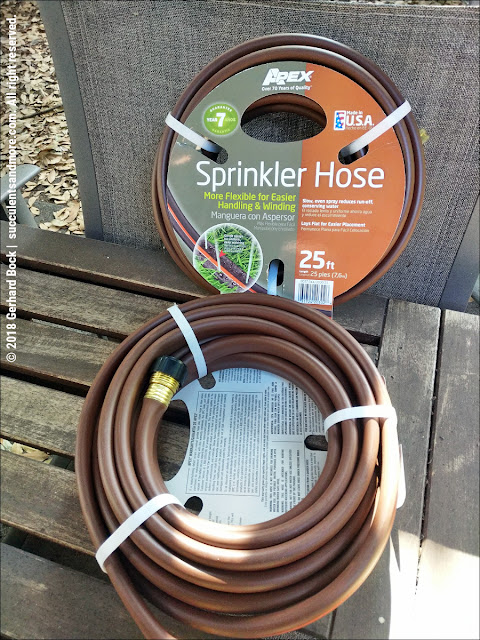 Below are some snaps from Home Depot where I picked up these sprinkler hoses. (Home Depot was the only place that had sprinker hoses in a neutral color—who wants bright blue or green?)

My Home Depot purchase, Bougainvillea 'Raspberry Ice'. I was looking for a climbing variegated bougainvillea with white "flowers". This is the closest I got: mounding and reddish purple bracts. On the plus side, 'Raspberry Ice' is one of the hardiest bougainvillea cultivars: according to the label, down to 20°F (which I personally doubt). 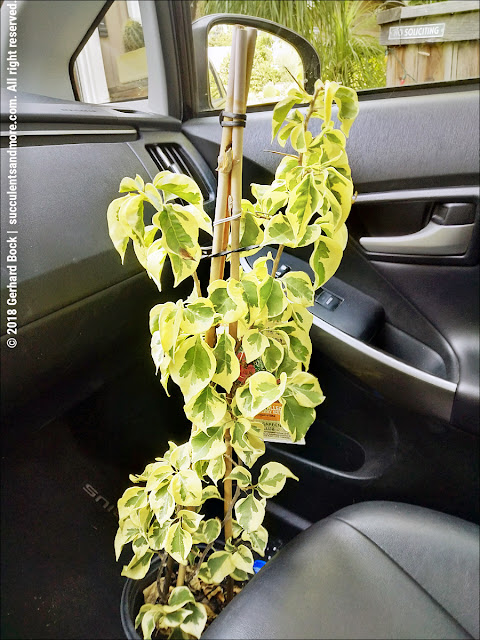 I planted 'Raspberry Ice' next to the orange tree in the backyard in a spot that is in desperate need of a facelift. If I ever find a white-flowering climbing bougainvillea, it'll go to the left of it. My goal is to cover the ugly fence with something, well, less ugly. 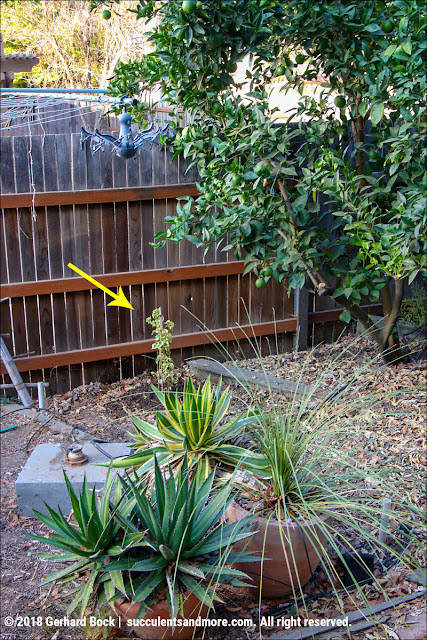 You'll see more photos of this corner of the backyard in the weeks and months to come since that's where I'm focusing my energy at the moment.

© Gerhard Bock, 2018. No part of the materials available through www.succulentsandmore.com may be copied, photocopied, reproduced, translated or reduced to any electronic medium or machine-readable form, in whole or in part, without prior written consent of Gerhard Bock. Any other reproduction in any form without the permission of Gerhard Bock is prohibited. All materials contained on this site are protected by  United States and international copyright law and may not be reproduced, distributed, transmitted, displayed, published or broadcast without the prior written permission of Gerhard Bock. If you are reading this post on a website other than www.succulentsandmore.com, please be advised that that site is using my content without my permission. Any unauthorized use will be reported.
agaves aloes back yard dry garden WeWu