My love for agaves is no secret. They're eye candy, they have a don't-mess-with-me attitude, and no matter where you put them—in the ground or in a pot—they make a statement that cannot be denied.

Many agave species live for a long time, but when this happens, the end is near:

Unlike perennials, which flower over and over again, virtually all agave species flower only once. They literally put all they've got into producing that one flower stalk. Even in a small agave like the Agave utahensis var. nevadensis above, the inflorescence is very tall in relation to the body of the agave.

The flower stalk began to emerge in early March. By late April it had reached its final size, and in the third week of May the flowers started to open up. A mini heat wave really sped up the flowering.

I sent the top section of the flower stalk (on the right in the next photo) to Hans Hansen of Walters Gardens. He is the brilliant mastermind behind their mangave program, and he wanted to harvest the pollen of my utahensis for future hybrids. I think a mangave with the spines of Agave utahensis would be very cool! 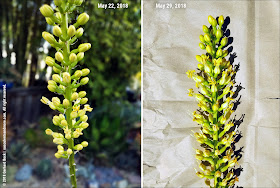 This is what's left of Agave utahensis var. nevadensis:

But that's not the only excitement in agaveland as you can see below: 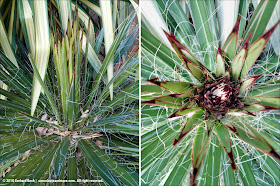 The Agave schidigera near the front door is sending up a flower stalk, too. I bought in 2010 at the UC Berkeley Botanical Garden, and it's always been a favorite of mine.

These photos show the progress of the inflorescence: 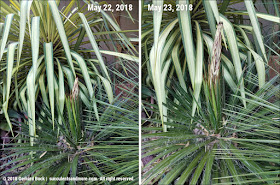 I have no idea how much taller the flower stalk will get. In his book Agaves: Living Sculptures for Landscapes and Containers, Greg Starr says 12-15 ft. The flowers will be a reddish hue (reddish yellow to deep red).

Like I did with Agave utahensis var. nevadensis, I'll send a section of the inflorescence with unopened flowers to Hans Hansen for use in his mangave work. Maybe he'll be able to create a mangave with curly hairs!