- June 04, 2018
The first garden we visited on the 2018 Garden Bloggers Fling in Austin, TX was the Lady Bird Johnson Wildflower Center. Established in 1982 as the National Wildflower Research Center under the auspices of actress Helen Hayes and Lady Bird Johnson it moved to its current 42-acre site in 1995 and was renamed Lady Bird Johnson Wildflower Center in 1997. The Center acquired an additional 237 acres in 2002, enabling it to pursue "larger scale research on the ecology of the Central Texas region and how best to restore healthy landscapes in the region." In 2006, the non-profit organization became part of the University of Texas at Austin.

Lady Bird Johnson, the wife of President Lyndon B. Johnson, was a committed environmentalist, working to preserve public lands for future generation and to "beautify" America. She was the driving force behind 200 environmental protection laws that were passed during her husband's administration. At the entrance to the Lady Bird Johnson Wildflower Center, which was opened on her 70th birthday in 1982, there's a quote by Lady Bird that perfectly summarizes her objectives:


My special cause, the one that alerts my interest and quickens the pace of my life, is to preserve the wildflowers and native plants that define the regions of our land—to encourage and promote their use in appropriate areas, and thus help pass on to generation in waiting the quiet jobs and satisfactions I have known since my childhood. 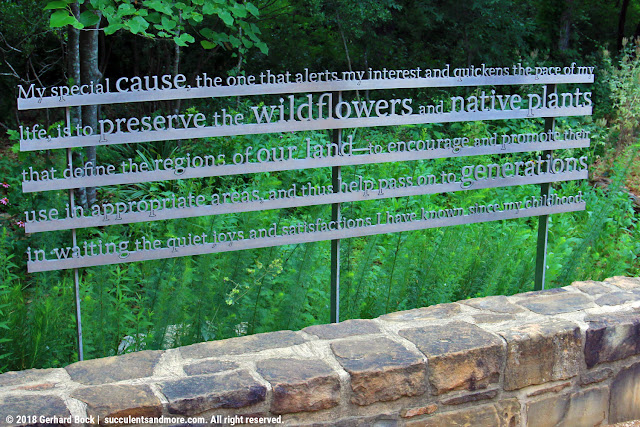 Lady Bird spoke these words in a 1990 address to The Bohemian Club in San Francisco. She continued:


Growing up rather alone in East Texas, I took my delights in the gifts nature offered me daily--in the wild pink roses and dew berries I would find in the sandy lanes or the cool pine forests with their understory of white dogwood in April or violets by the clear stream. That was the beginning of what was to become a life-long love affair with nature, and what that love affair has given me is the knowledge that native plants are as much a part of our national heritage as Old Faithful is, or the Capitol Building in Washington--and, more, that they speak the regional accents of the land, saying this is Virginia, or New Mexico, or the California desert after rain.

But like the rain forests of Brazil, the wildflowers of America are in peril. With the increase in our population, the open fields and meadows I once knew have mostly disappeared under grids of housing developments and shopping malls, a spaghetti network of highways, and acres of concrete parking lots. And buried beneath it all, lost to everything but memory, is the habitat for many species of plant life and the small animals and other wildlife they supported.

Can this vanishing legacy be saved, even as our population expands? This was the question I pondered in the years after I left Washington and especially after Lyndon died when I faced the rest of my life alone. We cannot keep all the fields of bluebonnets just as the Lord gave them to us. The needs of people for food and shelter and comfort, will, of course, always come first. But we can help redress the danger we have brought to nature's shifting balance. We can compensate for the loss of a part of their habitat by deliberately incorporating wildflowers and native grasses and their companions into new areas that will hospitably receive them, where their use will be appropriate, and where they can continue to grace the country with their color and glory. Where are those places? In our planned landscapes, along highway rights-of-way, in city and state parks, public lands and industrial parks, the roughs of golf courses, in country churchyards and suitable areas in our own homes.

I'm including this lengthy quote not only because the words are elegant and beautiful, but also because the message is as urgent now as it was 35+ years ago. Sadly, we haven't come as far as we should have since then, and given the current administration's relentless assault on the environment, much of the progress that has been made is being undone in front of our eyes.

With this in mind, let's visit the Lady Bird Johnson Wildflower Center (LBJWC). 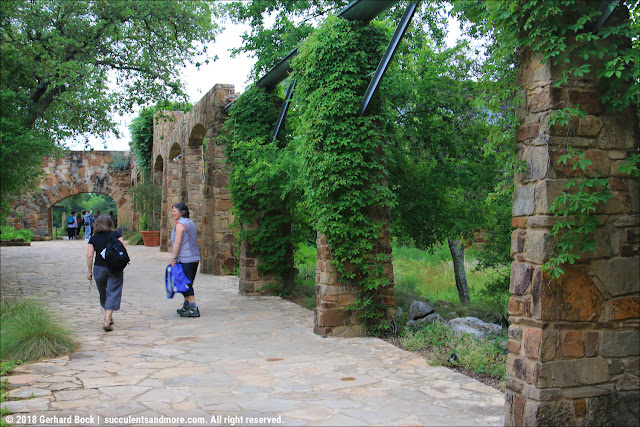 We'd woken up to dark clouds, and by the time we arrived at the LBJWC just before 8:00 a.m., it looked like dusk. But at least it wasn't raining. 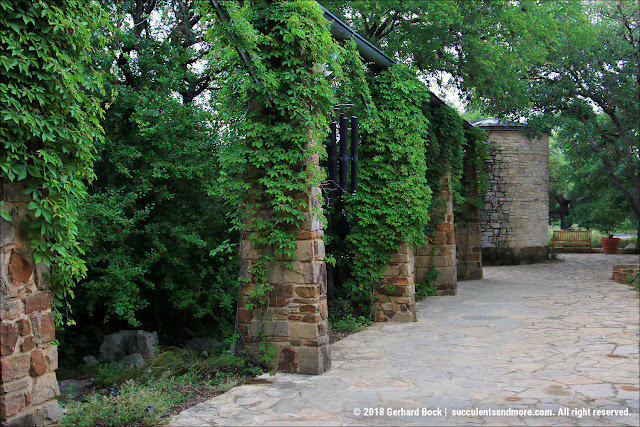 The stone archways at the entrance, many of them covered in lush vines, made me think of antebellum ruins. Amazing that they, like all the other buildings, are just a quarter of a century old. 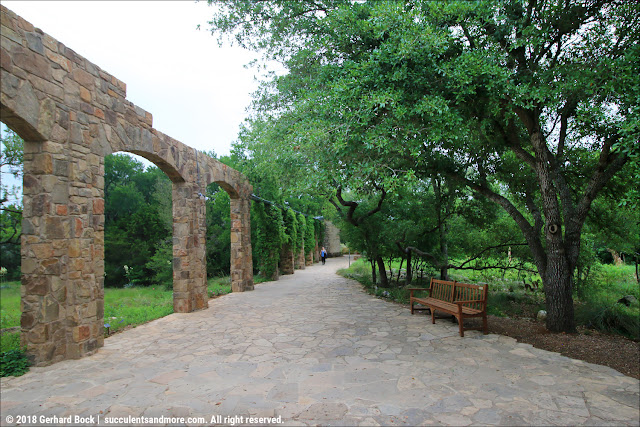 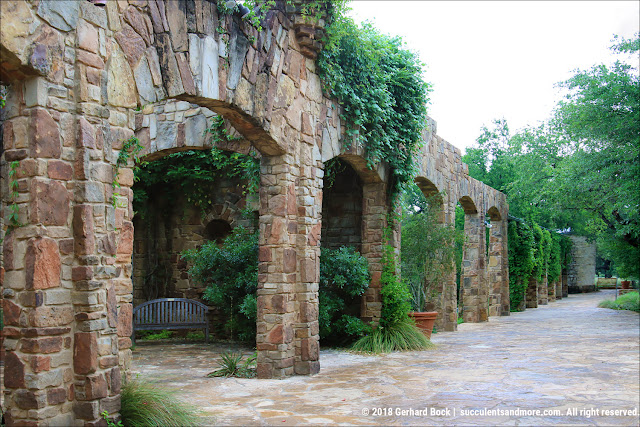 Look at the intersecting arches and walls in the next photo—sheer perfection! 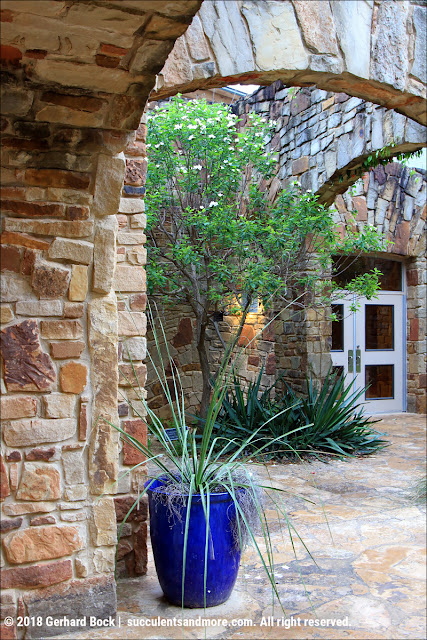 And then look up high: What a great idea to incorporate a corner planter on top of the archway that opens into the main courtyard! The desert spoon (Dasylirion wheeleri) gets all the sun it wants. I just wonder how they water it, considering there isn't much soil. Maybe it does get by with rainfall? 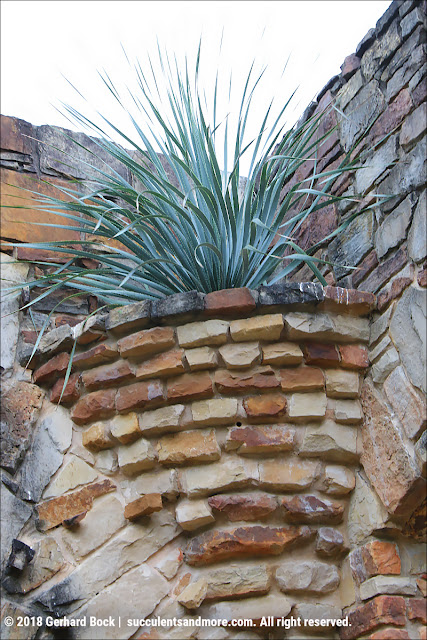 The buttressed wall on the right is the side of the auditorium: 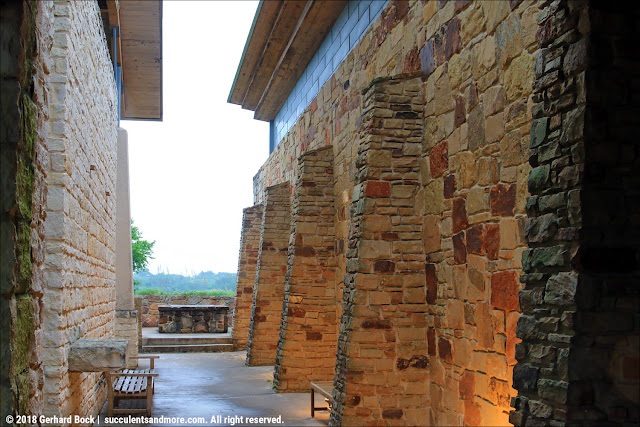 In the photo above, see the horizontal stone wall in the distance? The photo below is a close up. The wall is actually a planter; the flower stalks belong to Manfreda maculosa, a succulent native to Texas that goes by the common names "false aloe" and "spicy lily:" 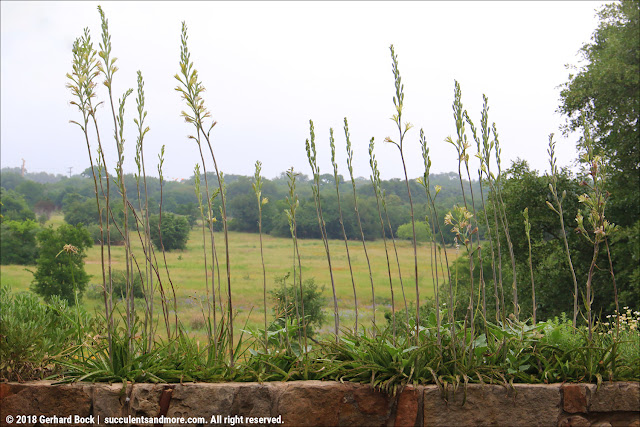 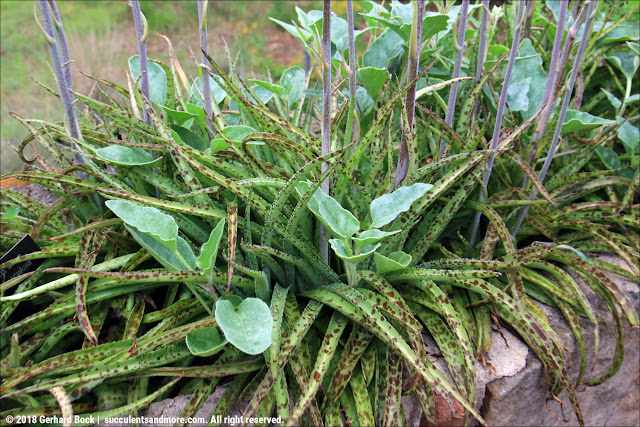 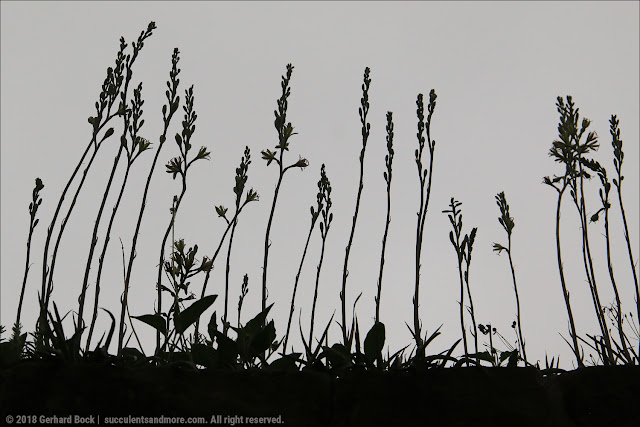 This Mammillaria clump was growing on top of a another stone wall: 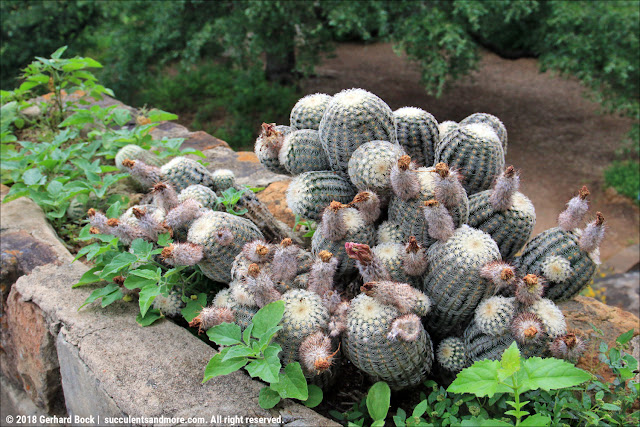 For me, the most dramatic part of the architecture is the Observation Tower: 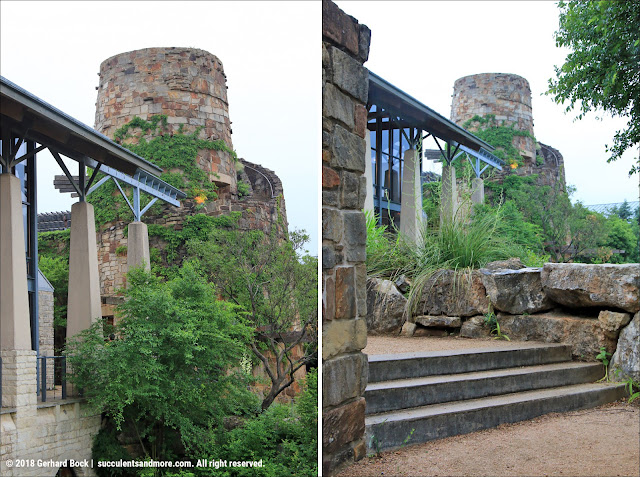 The 45-ft. tower is actually a 10,000 gallon cistern. It's part of the Center's massive rainwater harvesting system that collects up to 300,000 gallons a year.

Another arched passage that looks like it's hundreds of years old: 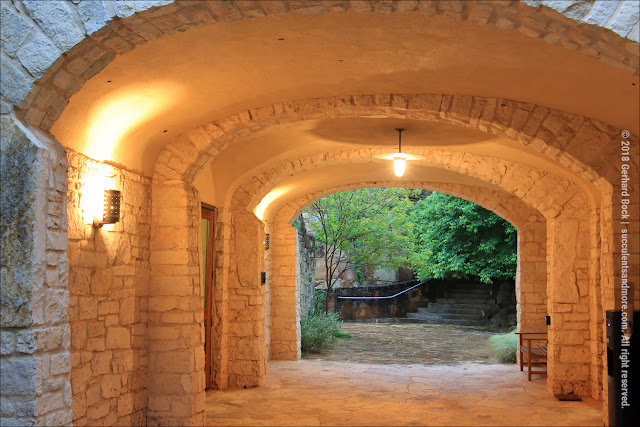 The structure in the next photo isn't a rainwater tank as I had initially thought but the Seed Silo. I tried to find out whether it's actually used to store seeds but I came up dry. 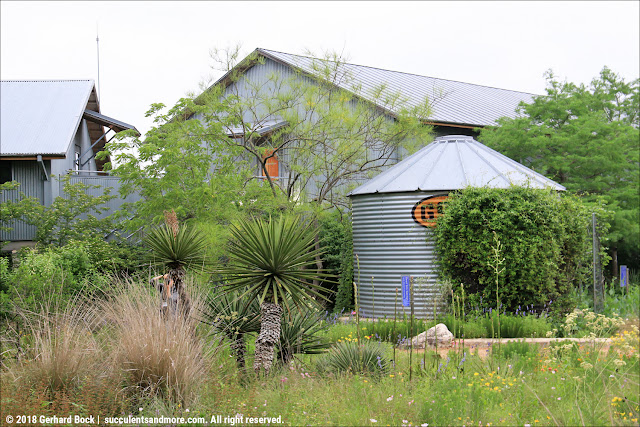 To nobody's surprise, the garden in front of the silo is called the Silo Garden. According to the LBJWC website, it uses a technique called "time sharing:" Plants that grow at different times of the year share the same spot without getting in each other's way.

I was most interested in the yuccas growing here: 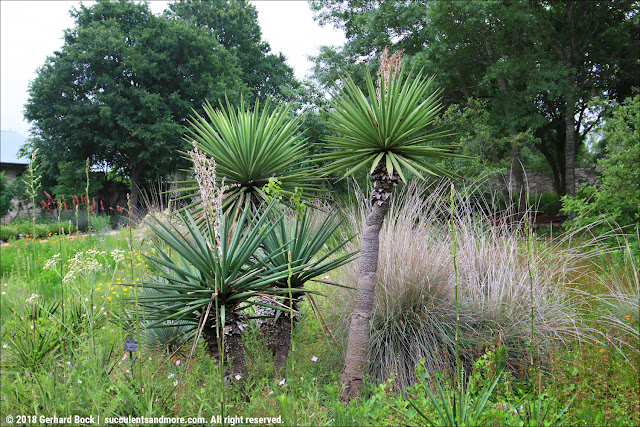 Peeking through an opening in the massive limestone wall into the Theme Gardens: 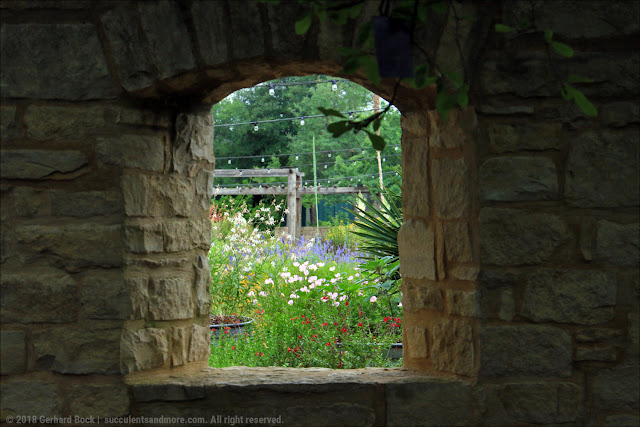 The Theme Gardens consist of 23 beds dedicated to special plantings or techniques, for example water and rock features, deer protection, or attracting butterflies or hummingbirds. 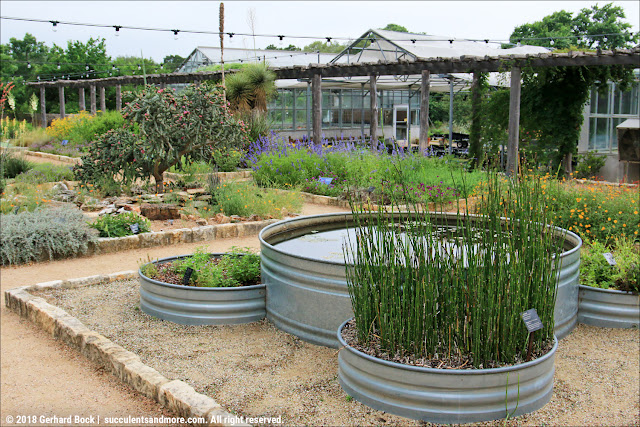 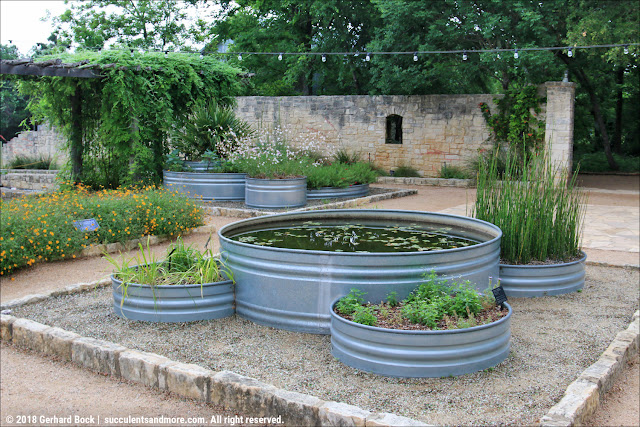 As the sky was getting ever more menacing, I knew I was on borrowed time. I decided to quickly check out the Arboretum Trail to see some of the wildflowers in bloom. Other bloggers had the same idea: 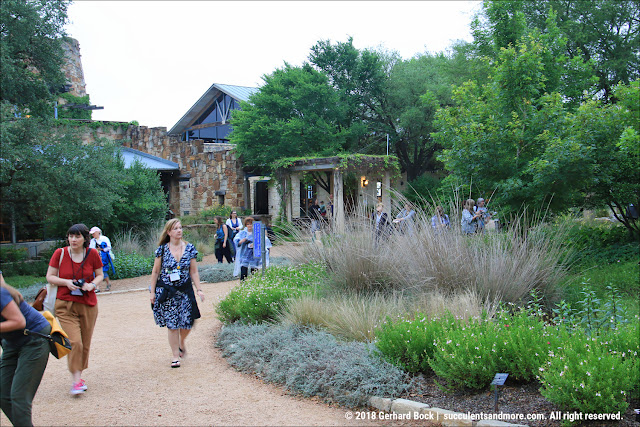 Many wildflowers were in full bloom: 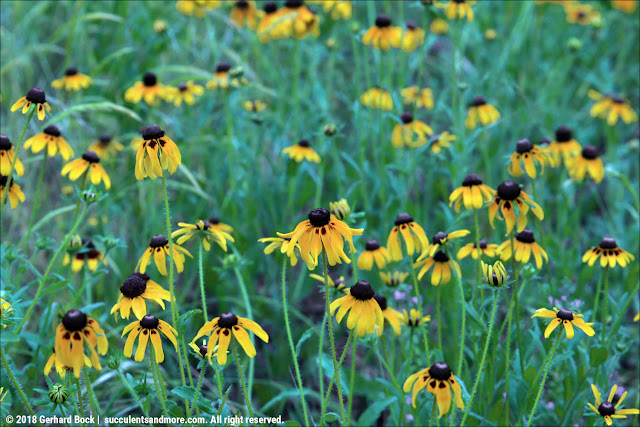 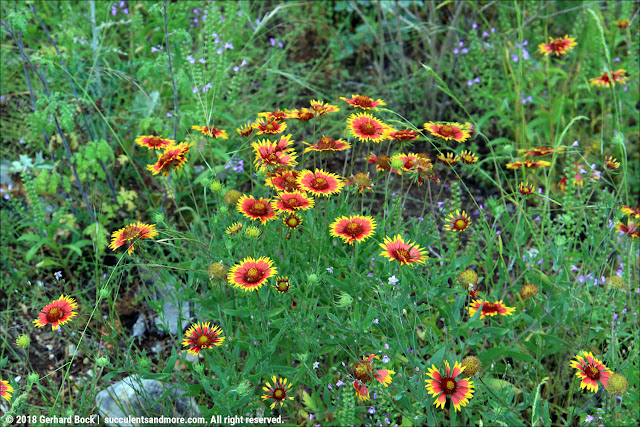 Before long, the first drops of rain began to fall. As they were getting bigger and coming down harder, I realized it was time to seek shelter. And the only shelter was under the deep overhangs in the Central Courtyard.

But first one last plant shot:

This is what the Courtyard had looked like at 9:00 am: 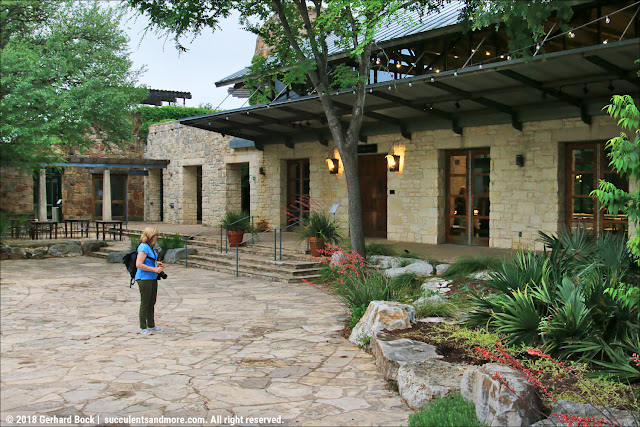 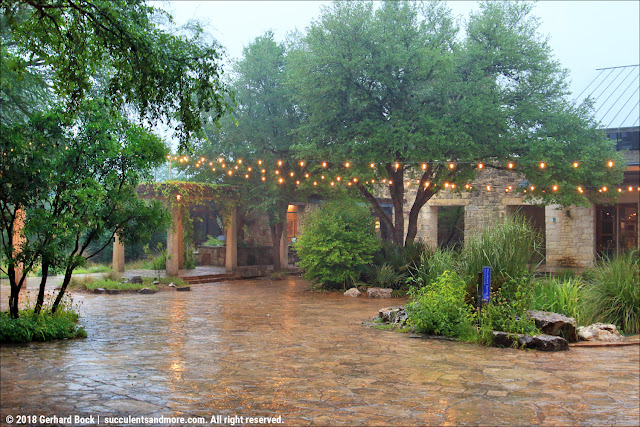 I thought I'd seen some heavy downpours in California, but this was in a league of its own. A gullywasher to end all gullywashers. 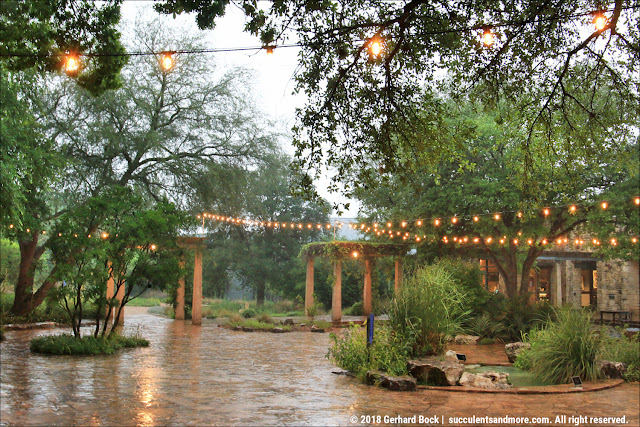 I was lucky because I'd made it back to the Central Courtyard before the sky really opened up. Others were caught out in the open and got soaked to their skin. 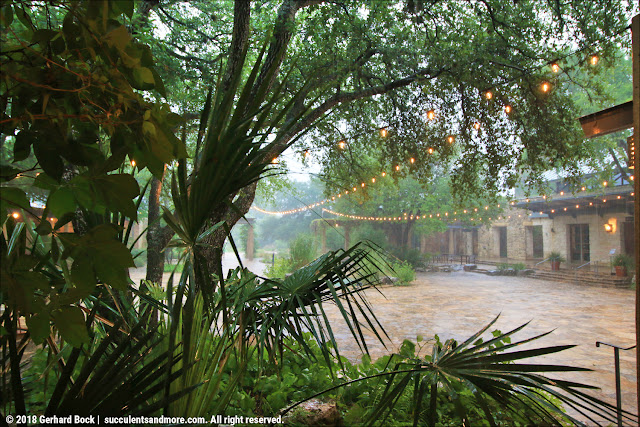 It's impossible to capture in still images how hard the rain was coming down. This short video clip will give you a better idea (bonus: lightning and thunder for extra effect):

In less than four hours, it rained over 3½ inches (95 mm). That's not your ordinary rainfall!

I spent about an hour hanging out in front of the gift shop, yakking with a motley crew of bloggers from all over the country and the UK, before it was time to board the bus. Yes, I missed a good chunk of what the LBJWC has to offer, but since it's a public institution, I can always come back for another visit.

© Gerhard Bock, 2018. No part of the materials available through www.succulentsandmore.com may be copied, photocopied, reproduced, translated or reduced to any electronic medium or machine-readable form, in whole or in part, without prior written consent of Gerhard Bock. Any other reproduction in any form without the permission of Gerhard Bock is prohibited. All materials contained on this site are protected by  United States and international copyright law and may not be reproduced, distributed, transmitted, displayed, published or broadcast without the prior written permission of Gerhard Bock. If you are reading this post on a website other than www.succulentsandmore.com, please be advised that that site is using my content without my permission. Any unauthorized use will be reported.
#gbfling2018 Austin public gardens rain Texas wildflowers yucca
Location: Lady Bird Johnson Wildflower Center, 4801 La Crosse Ave, Austin, TX 78739, USA