- January 24, 2018
You've never heard of the South Coast Botanic Garden? I don't think it would have been on my radar either if it hadn't been for the occasional post by Kris Peterson on her blog Late to the Garden Party. In an area full of A-listers like the Huntington and the Los Angeles County Arboretum, the South Coast Botanic Garden (SCBG) is probably only on the B- or C-list. But that's OK. Not everybody strives to be a superstar. Life is more relaxed, and there are far fewer paparazzi to deal with.

The SCBG is just 5 miles from Kris's house, and I gladly accepted her offer to show me around. The sun was already low in the sky when we arrived, and we were rushing through the various areas to see as much as we could before we ran out of light. I definitely want to go back in the late spring or early summer when more flowering plants are in bloom.


The history of the South Coast Botanic Garden is quite remarkable.

From the early 1900s to 1956, the area now occupied by the SCBG was a diatomaceous earth mine. No longer productive, the mine was sold to Los Angeles County in 1956 which began to use it as a sanitary landfill. In 1961, a group of private citizens achieved something that must have seemed impossible then (heck, it still does now): They persuaded the Los Angeles County Board of Supervisors to turn the landfill into a botanical garden! I have no idea how they did that, but in April over 40,000 donated trees were planted. Since then, the collection has increased to over 200,000 plants.

The success of this remarkable reclamation project has drawn experts from all over the world who are studying the feasibility of similar projects in their own country. I for one think the world would be a better place if we created more gardens instead of shopping malls! 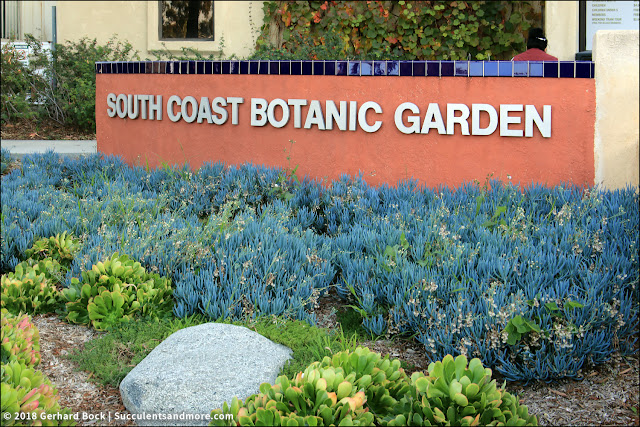 As I mentioned earlier, Kris and I didn't have much time so I wasn't able to explore the SCBG more thoroughly. As you can see on this map, there are 39 different gardens and collections spread out over an area of 87 acres, including a fuchsia garden, a dahlia garden, and a brand-new rose garden. Looking at them all would take at least half a day. But I'm glad I have something left to do on a future trip.

Because of the fading light I took far fewer photos than usual so consider this post to be a visual appetizer.

My favorite spot was the Desert Garden. It's not huge and the collection isn't heavy on rare or unusual plants, but there are some nice specimens. 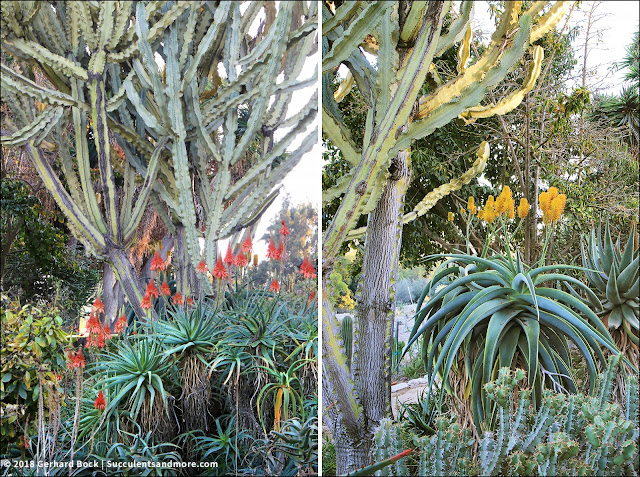 In closing, I should mention that the SCBG gift shop does sell plants. The selection wasn't large but the prices were refreshingly reasonable—they definitely want to move those plants. I found a well grown Aloe vanbalenii bursting out of a #1 pot for $8.00. That put a smile on my face.

I was dog-tired when I fell into bed that day, December 27. In the morning I'd gone to Roger's Garden and to the Sherman Library & Gardens. After a quick stop at Village Nurseries in Huntington Beach I headed on to Kris "Late to the Garden Party" Peterson's garden, and the two of us the went to the South Coast Botanic Garden. I'm not sure I ever had lunch that day. But that's how I roll on my solo trips—exploring has priority over food. At least as long as I can grab a coffee every now and then.