Visiting Kris of Late to the Garden Party

- January 19, 2018
Late to the Garden Party is one of the gardening blogs I read religiously. It chronicles the evolution of Kris Peterson's garden on the Palos Verdes Peninsula west of Long Beach. Kris is a well-rounded gardener, growing everything from succulents and bromeliads to proteacea to roses and daylilies. In her triweekly posts, she documents developments in her own garden—success and failures alike—as well new plant acquisitions and visits to local nurseries and gardens.

On my late-December trip to Southern California I had the opportunity to visit Kris's garden in person. Having seen so many photos over the years, I had a pretty good idea in my head of how it was laid out. But in reality, everything was flipped, i.e. what I thought would be on the west side is on the east side, etc. Has that ever happened to you?

Kris was in the front garden when I arrived, so that's where we started our tour. The photo below is from Google Street View and while some things have changed since it was taken in October 2014, the basic layout is still the same.


After my visit I realized that I didn't take nearly enough photos of Kris's garden. The light was very contrasty, which makes it difficult to get good pictures. More importantly, however, Kris and I got along so famously that we spent all our time yakking (or, as I prefer to call it, conferring on botanical and horticultural matters).

The beds on either side of the front door are planted with a mix of shrubs and perennials. Even though Kris and her husband have only lived here for 7 years, these plants look more or less mature to me. 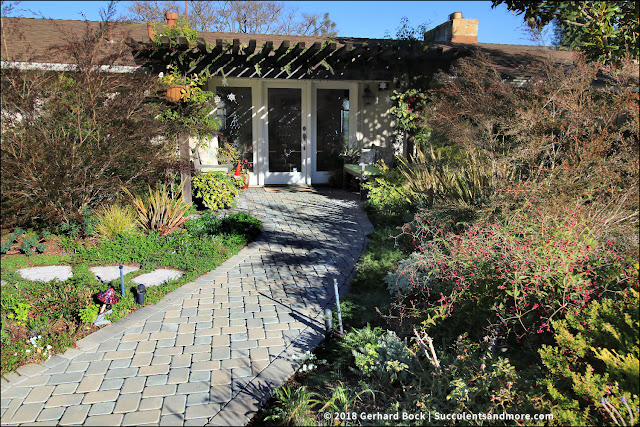 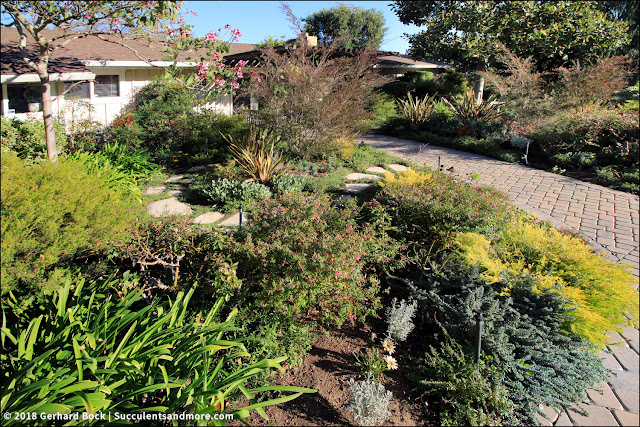 On northwest side of the property, next to the garage, is Kris's newly installed bromeliad pocket garden. She describes this project in this post from November 2017. 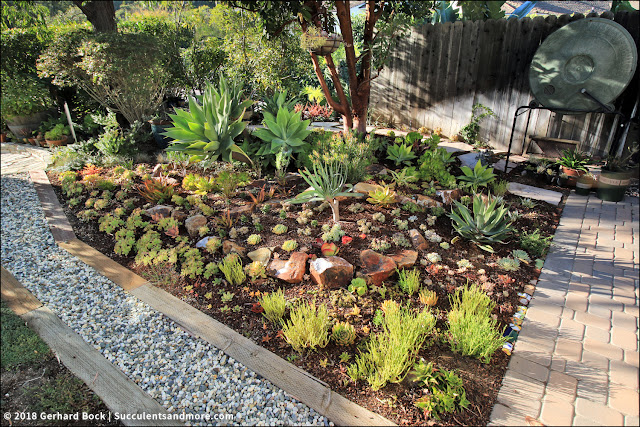 Sheltered by an Arbutus 'Marina', this area is in the shade most of the day—exactly the conditions many bromeliads prefer. I'd lie if I said I wasn't envious of the mild climate of this coastal location. Never having to worry about frost, I could get used to that! 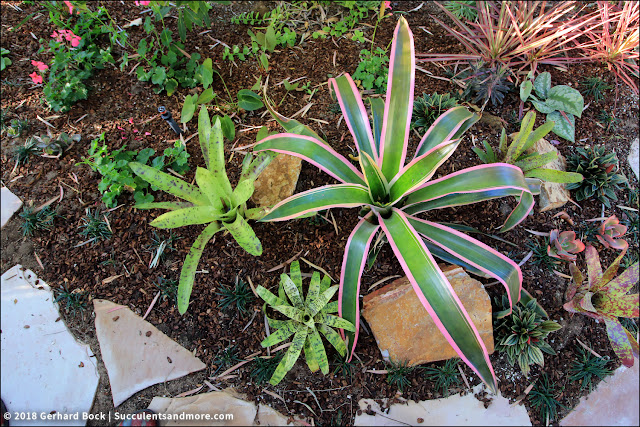 Next to the garage on the other side (east) is an enclosed vegetable garden complete with citrus and other fruit trees. A gate then takes you to the dry garden. That's where I photographed this bed newly planted with succulents: 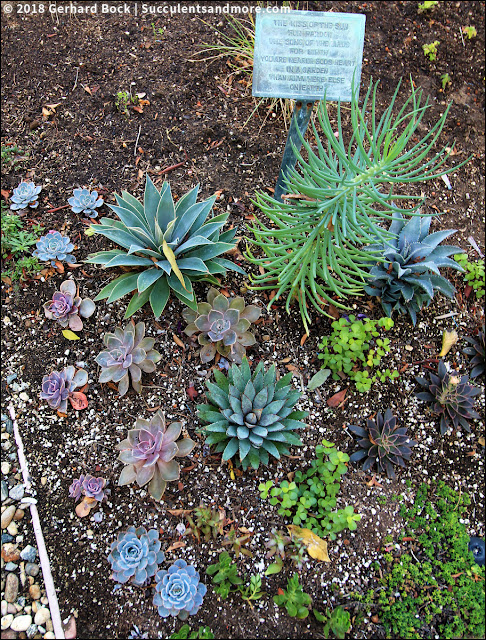 Along the eastern edge of the ½ acre property, separated by a hedge, is a steep slope that's very challenging to landscape. Currently, much of it is ivy. Kris would like to overhaul this area but she isn't quite sure yet what to do. Since the slope is fairly sleep (my photo below does not do it justice), working here won't be easy. 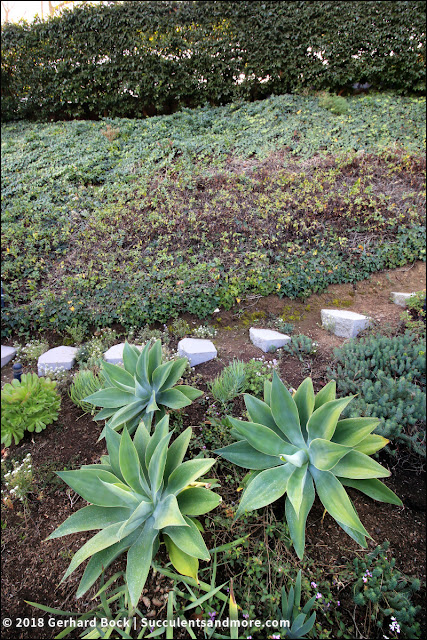 Now we're in the back garden. Yes, there are many plants that deserve closer attention, but the first thing you see is the view. THE VIEW! A full 180° panorama of the Port of Los Angeles and beyond. This is the kind of vista the word "jaw-dropping" was invented for! Unfortunately, there was a great deal of haze that day, which limited the visibility, but Kris assures me that on a clear day, you can watch all the goings-on in the port. 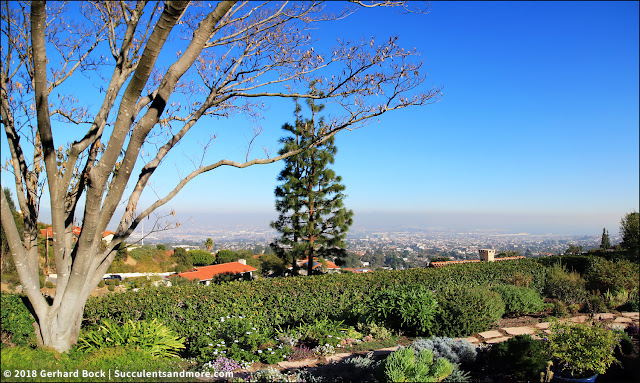 There's quite a bit to see right at your feet: 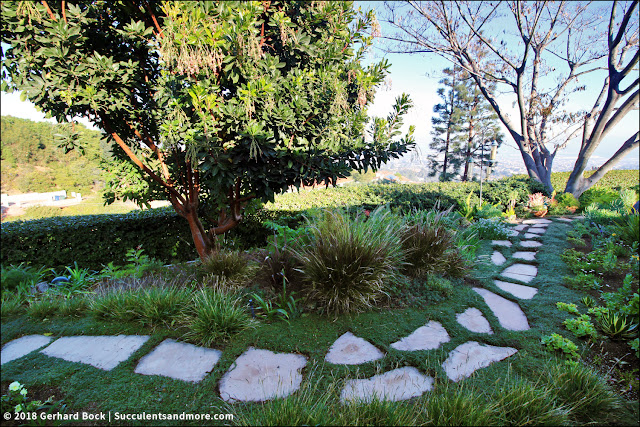 I'm a sucker for stepping stones in a bed of low-growing thyme: 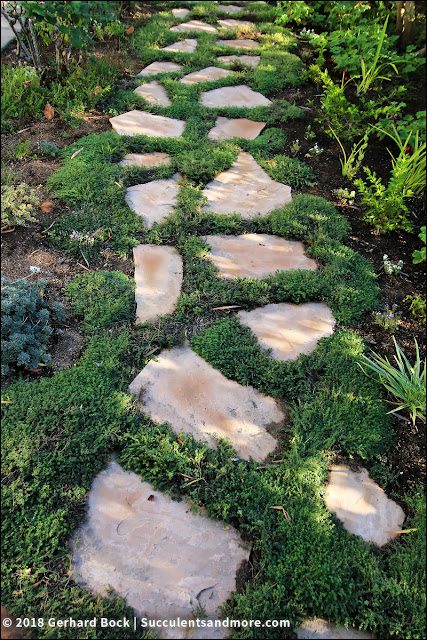 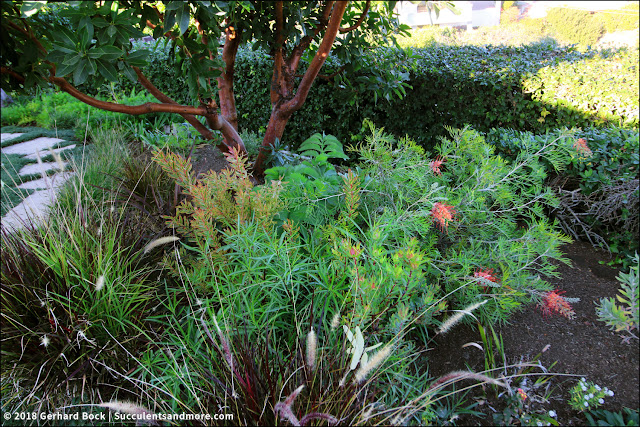 I also loved the living room's floor-to-ceiling windows facing the view you saw above (and will see again below): 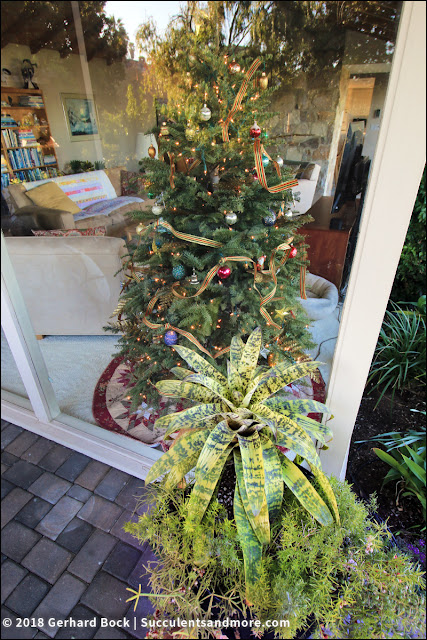 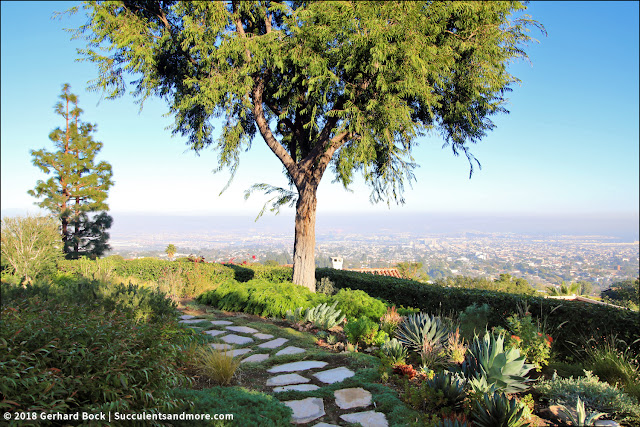 I know I shouldn't focus so much on the view, but even with all the haze, it was awe-inspiring—at least to this guy who lives in a town that's completely flat and where nobody has a view. 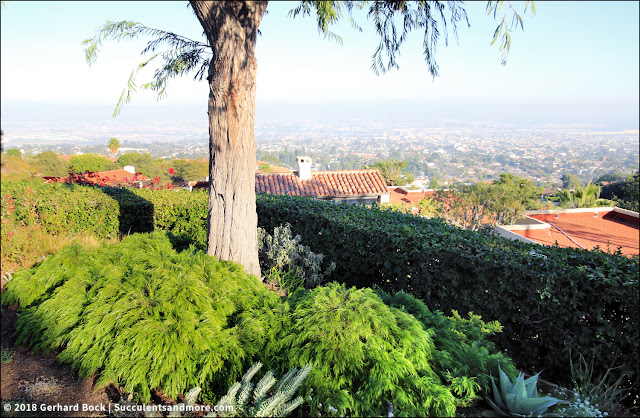 OK, enough with the view. Let's focus on Acacia cognata 'Cousin Itt' instead. These specimens (three, I believe) are utter perfection. 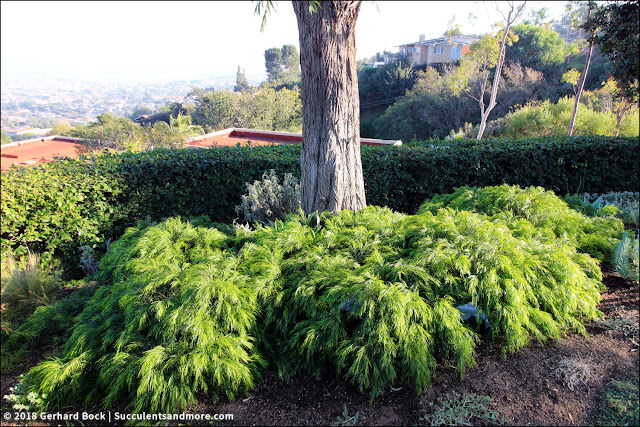 Now we're in the southwest corner of the property. In the photo below, the street where I parked is to our left, the house to our immediate right (just outside the frame). 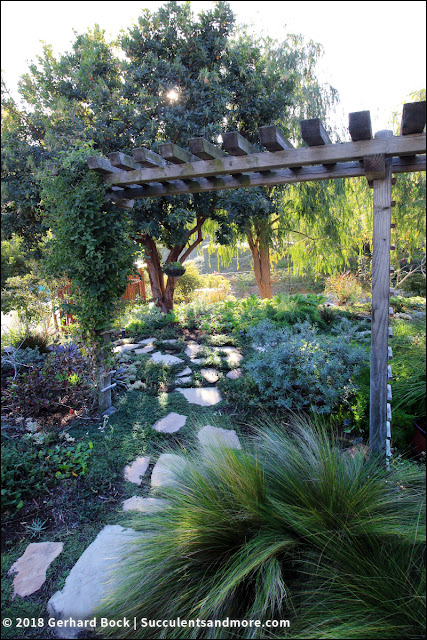 The area beyond the arbor is a lush oasis although virtually all the plants need relatively little water: 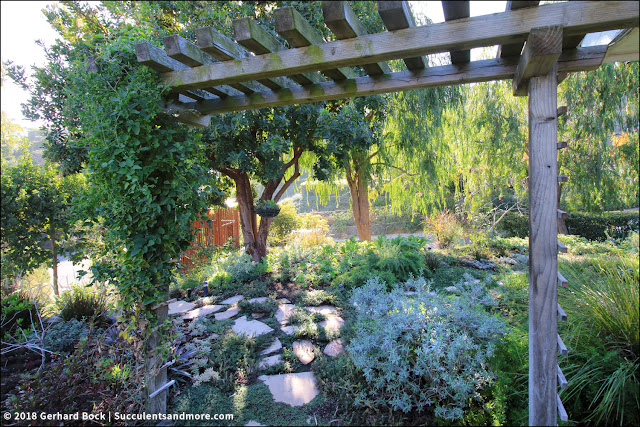 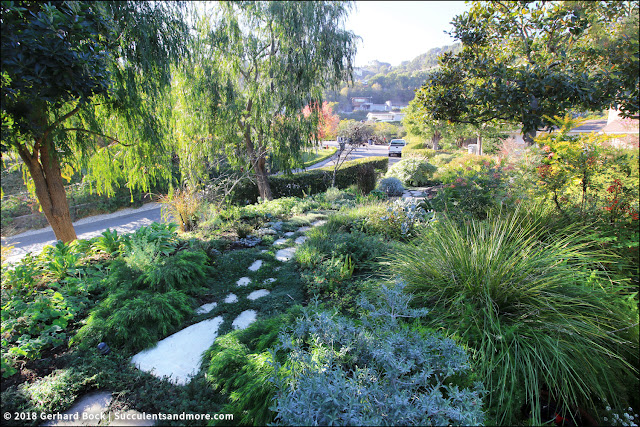 At the bottom of the side garden you can see the new lathe house Kris's husband built for her. It had just been finished when I arrived. 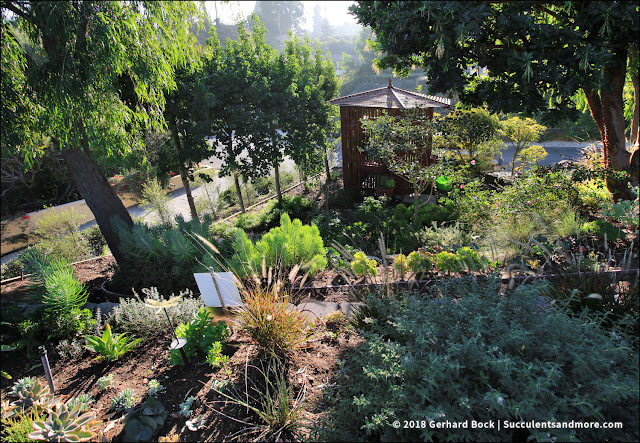 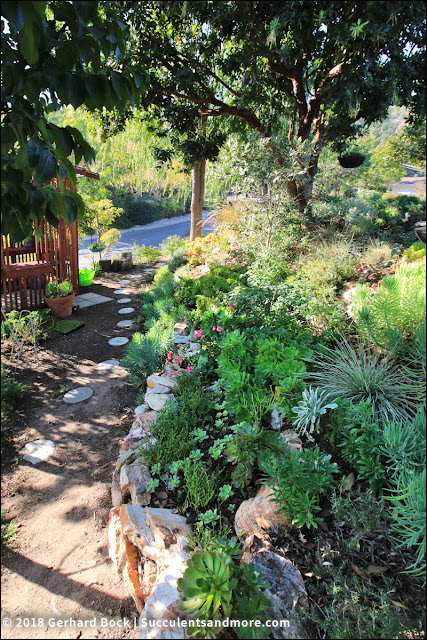 One final photo before it's time to leave (my car is on the left, the house to the right, the Port of Los Angeles behind us to the left): 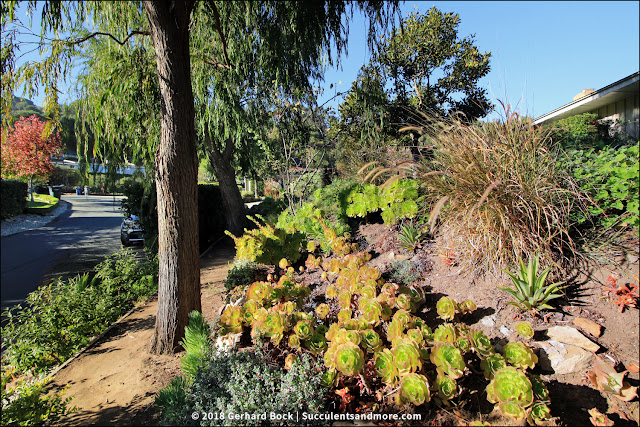 If Kris ever invites me back, I'll do my best to take more and better images!