Roger's Gardens: what a nursery should be

- January 11, 2018
Day 2 of my late-December trip to Southern California began with a visit to Roger's Gardens in Corona del Mar (basically Newport Beach). Hoover Boo of Piece of Eden and her husband go to Roger's regularly, and they had been very enthusiastic about the demonstration garden along the road. While annuals and perennials in the display beds are swapped out periodically throughout the year, the aloes and agaves seem to be a permanent fixture.

My timing couldn't have been better because the aloes were in full bloom. The local police should put up signs instructing drivers to keep their eyes on the road instead of looking at the aloes! 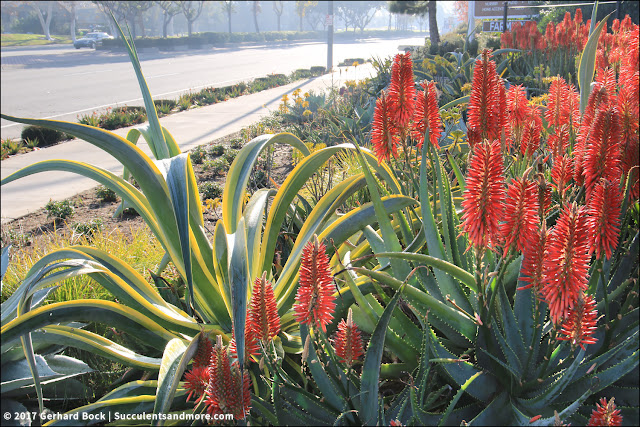 Roger's Gardens was started by Roger McKinnon in 1965 in Costa Mesa. Gavin Herbert bought the business in 1970 and moved it to its current location in 1975 where it's become a destination for Orange County gardeners. The company now has over 100 employees and offers landscape design and event services in addition to the nursery and the attached shops (home and garden decor, gourmet food, jewelry) and the Farmhouse restaurant.

Roger's Gardens is the kind of nursery where every plant looks well cared for, where nothing appears out of place, and where employees actually know something about plants. Given today's cheaper-is-better big-box mindset, that's the exception rather than the rule. Yes, you pay more, but you get an experience, including a beautiful display garden.

The display garden at the corner of San Joaquin Hills Rd and MacArthur Blvd has more Agave vilmoriniana 'Stained Glass' than I've ever seen in one place. A few years ago it was almost impossible to find this variegated variety of the graceful octopus agave. Its availability has improved a bit but it's still not common. 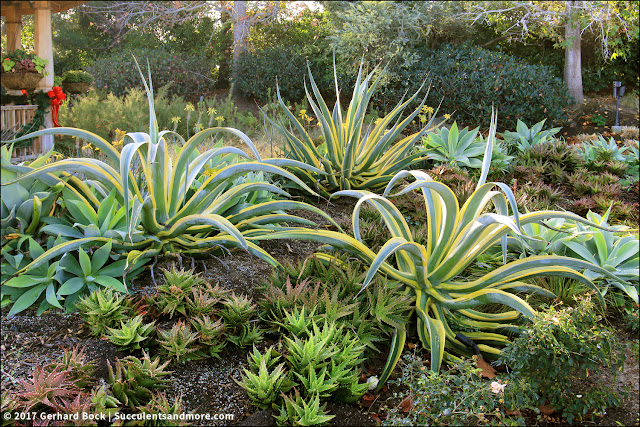 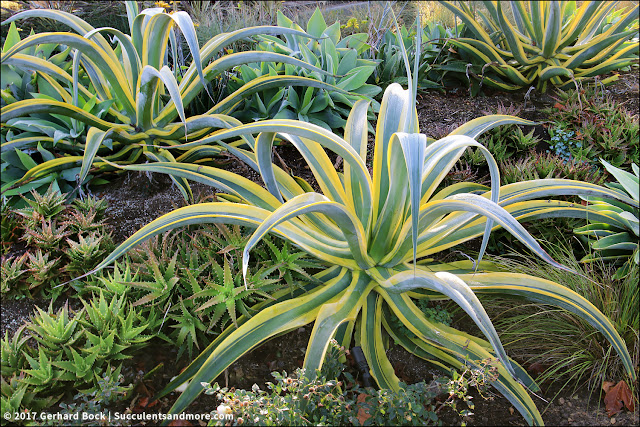 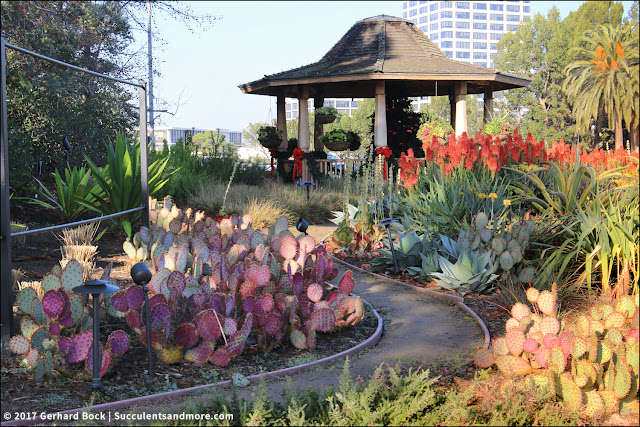 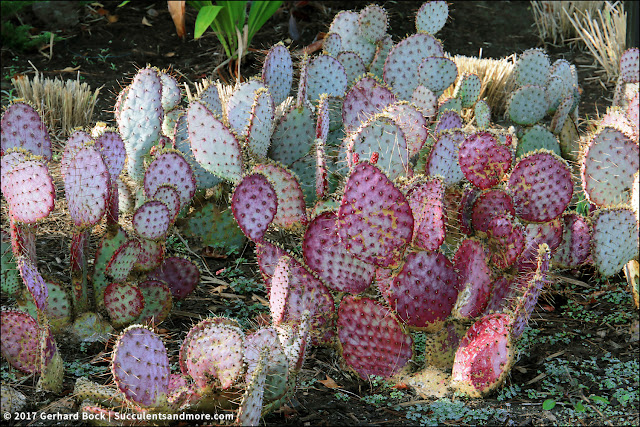 But my eyes immediately went to yet another agave: Agave ovatifolia, the whale's tongue agave. 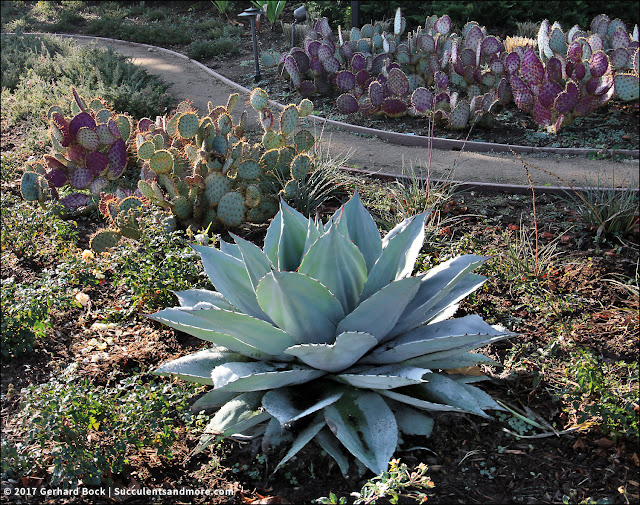 The specimen above was not the only one. There were more. Many more. 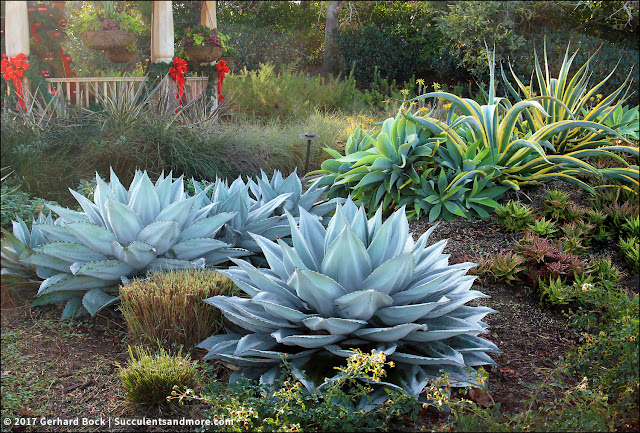 In fact, there were dozens of Agave ovatifolia, most likely the tissue-cultured cultivar 'Vanzie' that sports deeply channeled leaves. 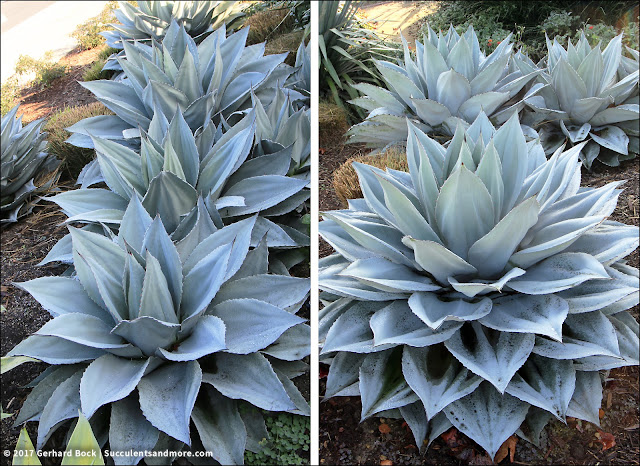 In the bed closest to the road Agave ovatifolia grows next to the most vibrant aloes I've seen. I don't know what they are but my guess is some hybrid like 'Always Red'. 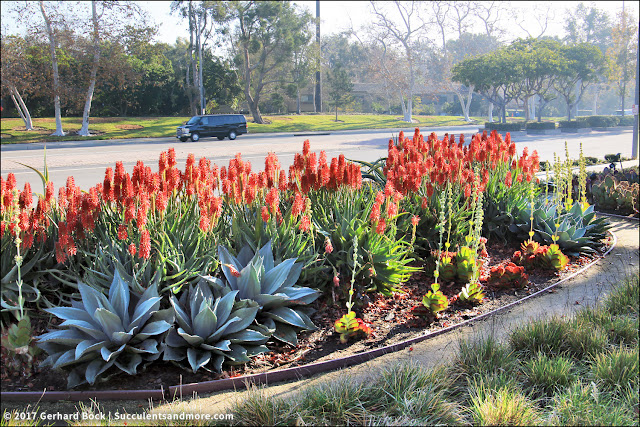 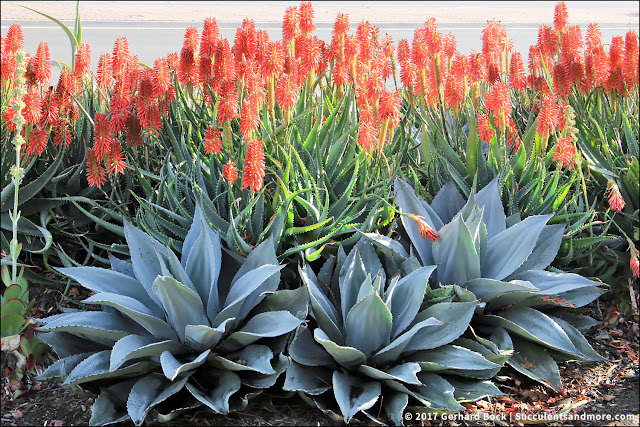 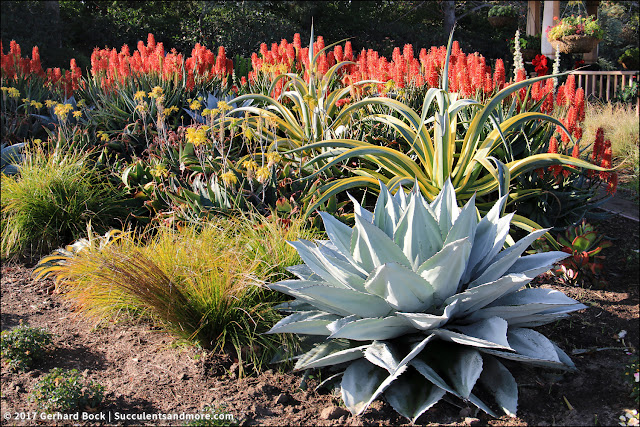 And all three together: mystery aloe, Agave vilmorinia 'Stained Glass' and Agave ovatifolia. 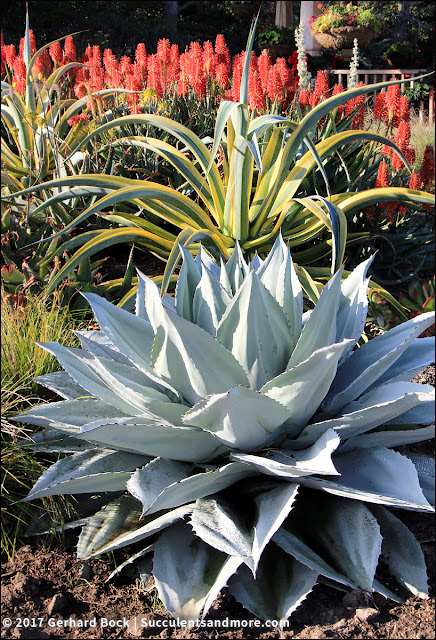 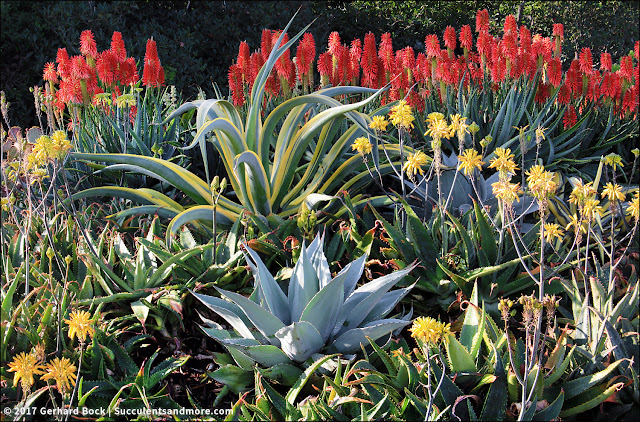 The agave in the next photo is actually quite a rarity: Agave salmiana var. ferox 'Mediopicta'. It's still a toddler; San Marcos Growers expects the adult size to be 4-5 ft tall by 6-8 ft wide. Hoover Boo gifted me an offset a few years ago, and while it's doubled in size, it's not a fast grower (most likely because of the relative lack of chlorophyll). 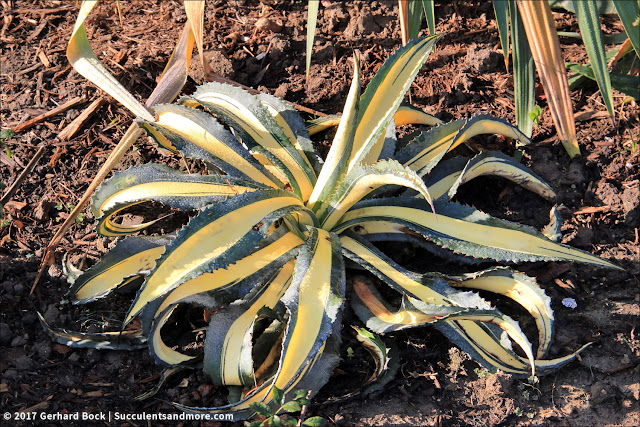 A sad and depressing sight: Many of the aloes planted along San Joaquin Hills Rd shown moderate to severe signs of aloe mite infestastion. I've read a variety of treatment approaches. Many experts say getting rid of the infected plants is the only option. Some recommend systemic insecticides while others advise against it. Miticides seem to be effective for some, good old-fashioned Sevin dust for others. The most promising treatment I've seen is the application of formaldehyde as practiced by Sunbird Aloes, the renowed South African aloe grower that has brought us treasures like 'Moonglow', 'Eric the Red' and 'Always Red'. 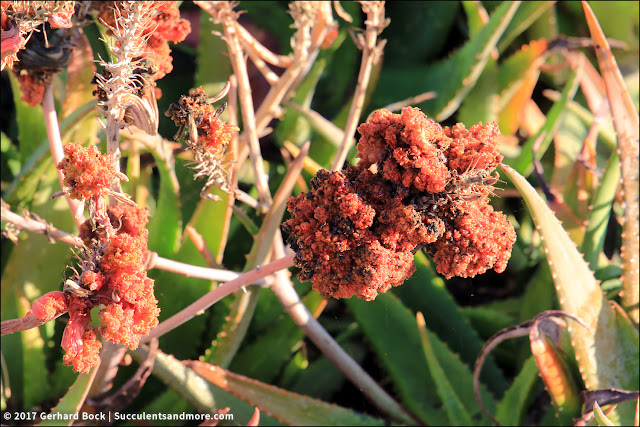 Once inside the nursery, I was in treasure-hunt mode. You never know what rare or unusual plants you might find! 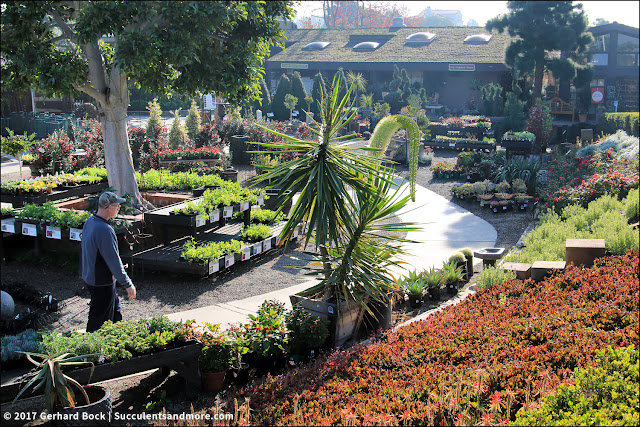 I did take a few photos:


Even the plantings in the parking lot were striking, like these Leucadendron 'Jester': 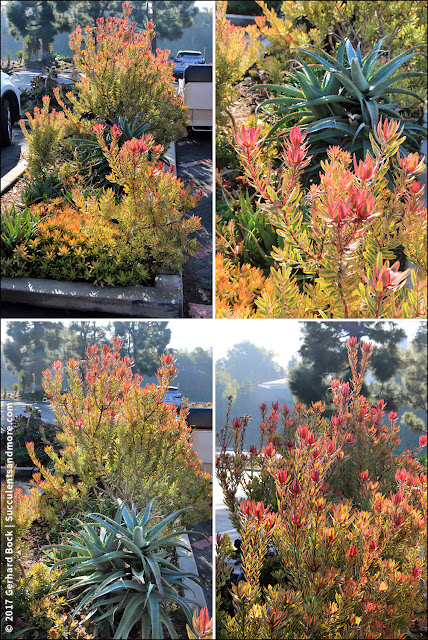 I did buy a few things at Roger's:


According to Hoover Boo, the nursery wasn't fully stocked yet because they were still clearing out holiday decor and plants. I can only imagine the kind of damage I could have done at the height of the spring planting season!