- April 23, 2017
On my trip to Palm Springs in early March, Mariscal wasn't the only succulent nursery we visited. In fact, our second nursery destination was even bigger!

I'd first become aware of Sunland Cactus Nursery through a blurb in Sunset Magazine. Wouldn't you want to go after reading this?


For most of the journey to this Desert Hot Springs nursery, you’ll be cursing the people (that would be us) who told you about it. You drive down desolate Dillon Road, whose undulations make you feel you’re riding a roller coaster, and begin to worry that you’re nowhere but in the middle of meth country. Then, at last, you spot it—a field of blue-green spiky orbs growing in 24-inch wooden tree boxes—and give thanks to the heavens.

The short article went on talk about riding in a golf cart through "rows of containerized palms, agave, and euphorbia, all of them seemingly waiting to be moved from the nursery to your front yard."

Brilliant piece of writing, Sunset! It's the best advertisement for a nursery I can imagine, especially for customers with a bit of an adventurous streak.

Dillon Road didn't quite reach roller coaster level but the undulations did make me a bit queasy, probably because I was driving too fast. But then, there was hardly anybody else on the road. We stopped at the address given in Sunset Magazine, 28900 Pushawalla St in Desert Hot Springs, and began to explore.

This is the first photo I took: 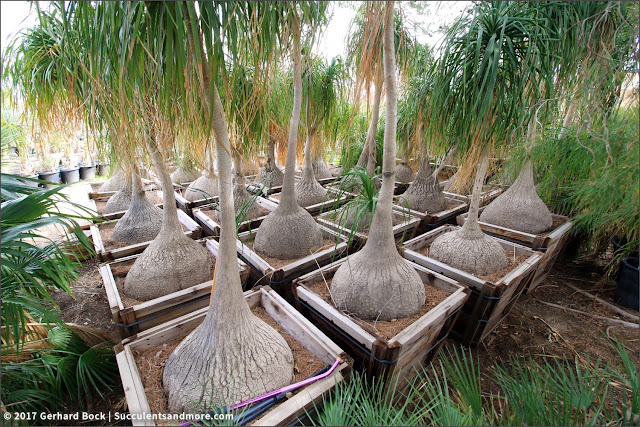 Talk about instant impact in your garden!

The nursery wasn't as large as I had imagined and it was a bit more unkempt than I was used to from similar places. 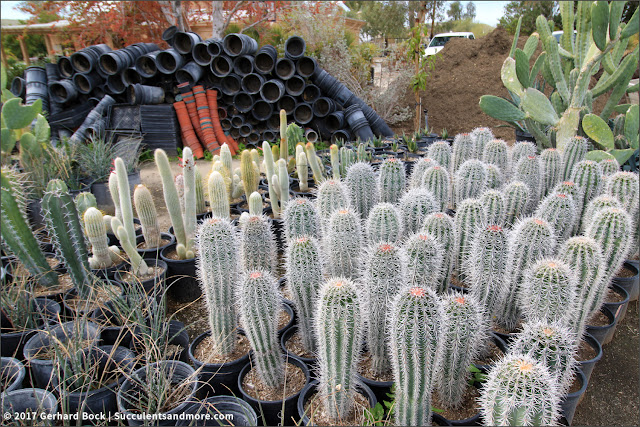 Still, there were thousands of cactus and succulents to marvel at. 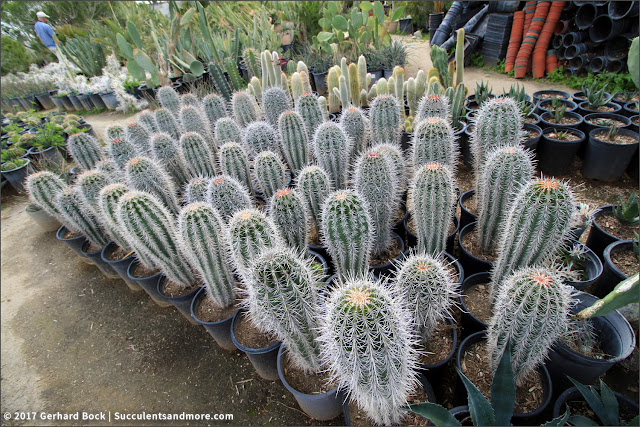 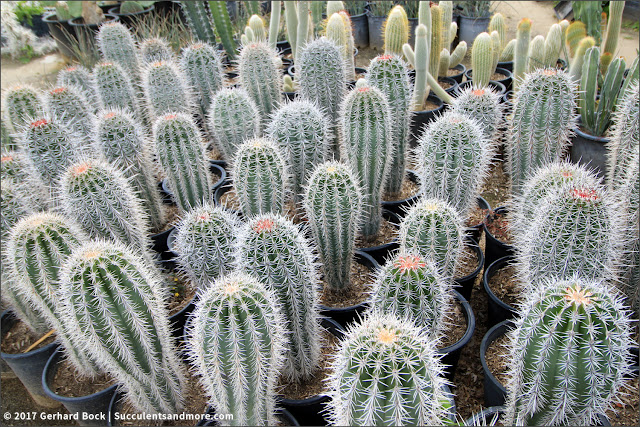 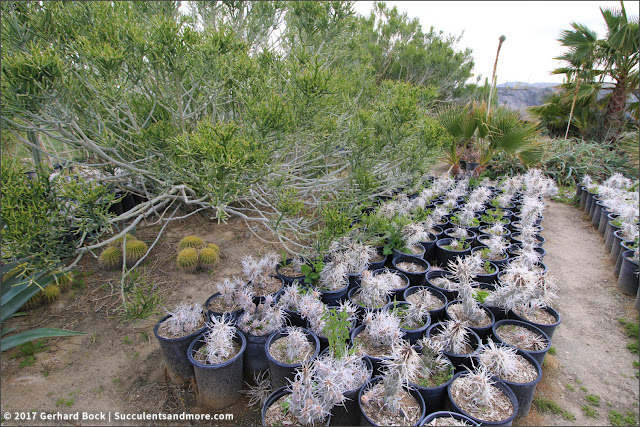 Here's an example of how easily some cactus propagate. This is the paper spine cactus (Tephrocactus articulatus). As it gets taller, the top segments get top-heavy, break off, and fall to the ground. 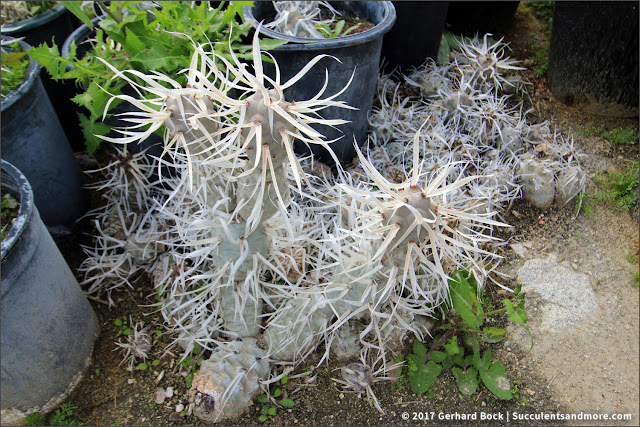 And before you know it, they have rooted and begun to grow, eventually shedding segments of their own. Eventually you end up with this: 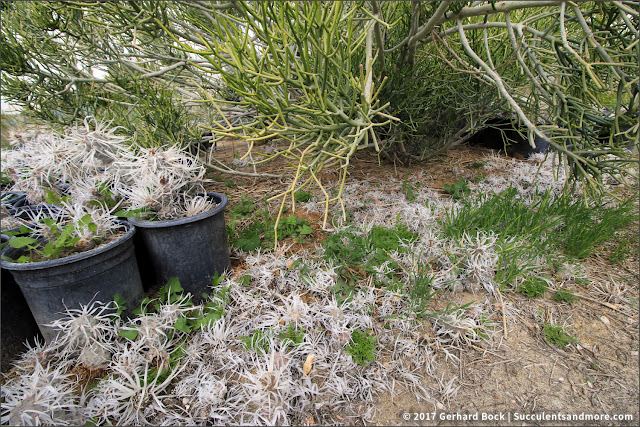 The shrub/tree in the photo above and below, by the way, is Euphorbia tirucalli. For those of us living in a climate where winters aren't as mild as in Palm Springs, it's usually a container plant that needs protecting on cold nights. It's the all-green version of the popular 'Sticks on Fire'. And yes, it can become a shrub or even a small tree!

In the photo below, you can see Euphorbia tirucalli divisions rooting in 5-gallon pots. 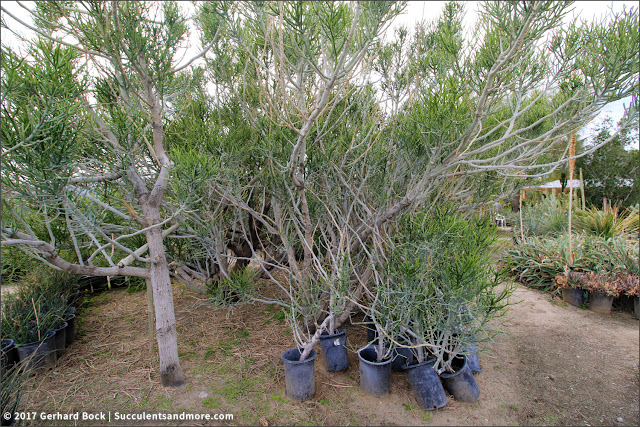 Agaves growing in the ground, waiting to be dug up for installation in a client's garden: 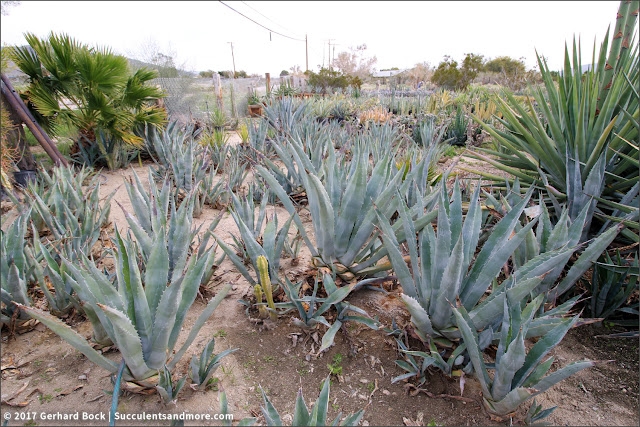 Half the space in the hoop houses seemed to be occupied by golden barrel cactus (Echinocactus grusonii): 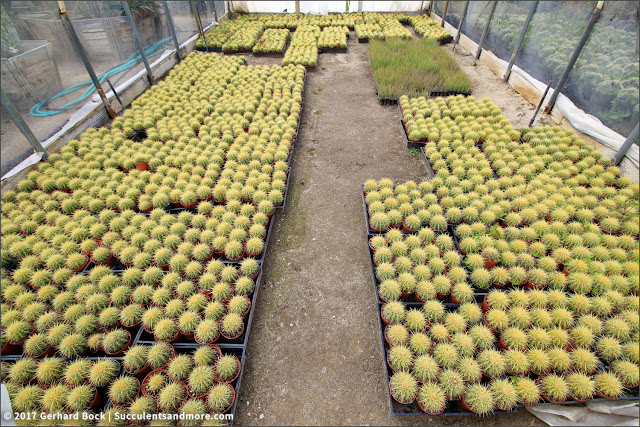 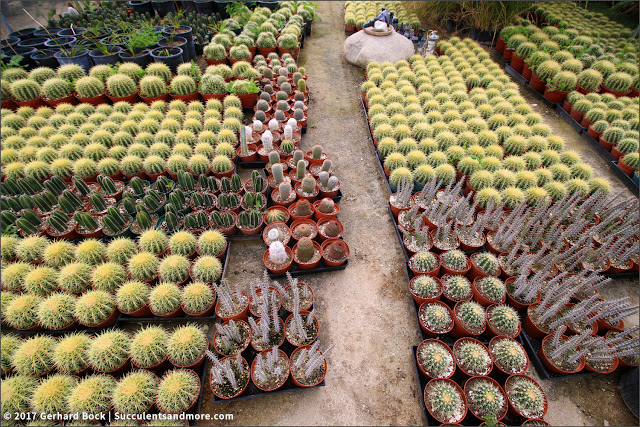 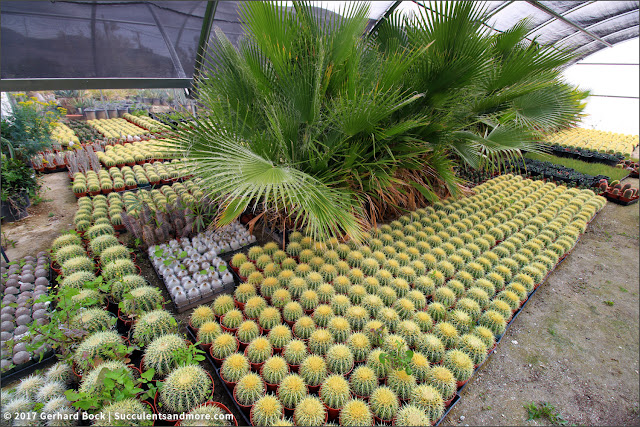 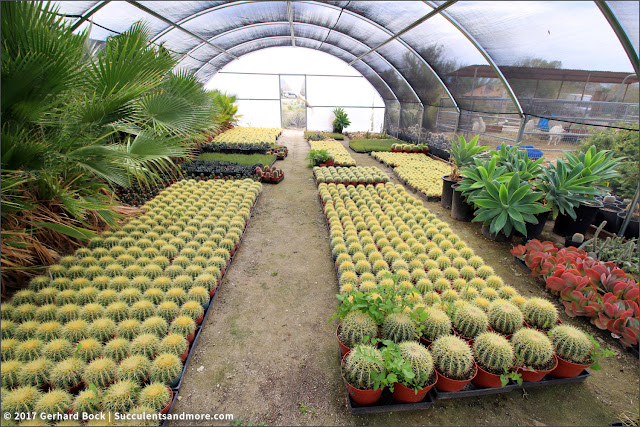 Did I mention they had golden barrel cactus? 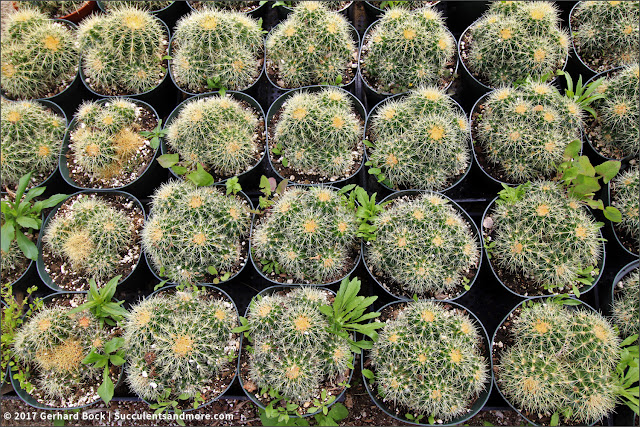 The plants outside seemed to be arranged in no logical order. I have no problem with that. It simply requires a bit more exploring. 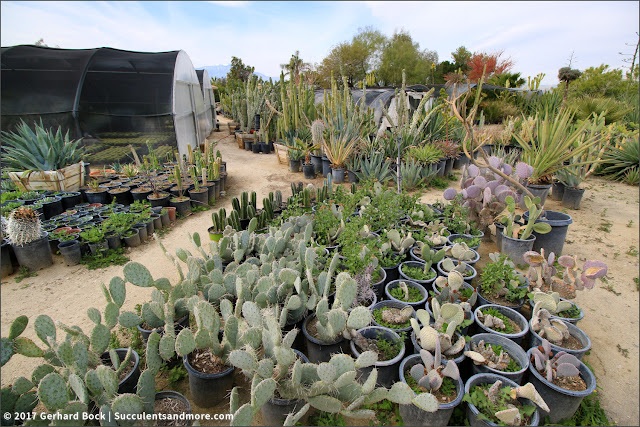 This is what happens when an octopus agave (Agave vilmoriniana) flowers and is left to its own devices. Eventually the bulbils drop off and form an impenetrable tangle that reminded me of a writhing mass of baby eels: 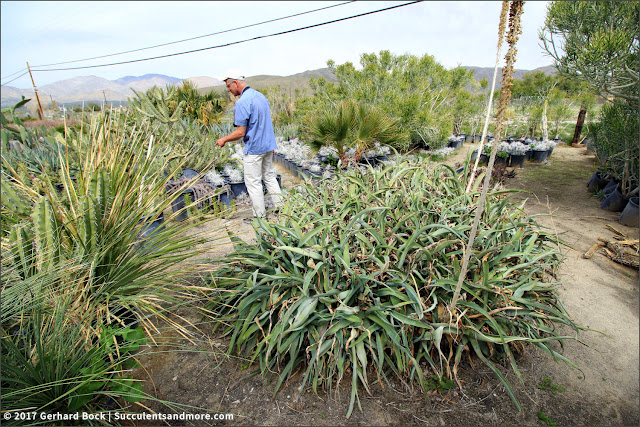 It was at this point that one of my friends wanted to know the price of a certain plant and walked over to the kids playing in front of what looked like a regular house. They said to ask "over at the nursery." Over at the nursery? What was this then?

It turns out it was not the main nursery, just the "annex." The main nursery was a short distance down the road. And it was much larger than the annex. Yes, there were golf carts, and I talked to tourists from Saskatchewan, Canada who had gotten a ride in one. (They had also read the Sunset Magazine blurb.) We were offered a ride as well later on, but since all I had was bought a 1-gallon Euphorbia tirucalli 'Sticks on Fire' I felt a bit silly and declined.

The main nursery has dozens of rows of plants in all sizes, mostly 5 gallon and up. In addition to cactus and succulents, they also carry palm trees--some so large that heavy machinery is needed to install them. I had expended most of my picture-taking energy in the annex and actually took fewer photos in the main nursery. Here is a selection.


And finally a few photos of the golden barrel fields. I have a feeling they used to be more extensive; Sunland must have sold a lot of specimens in recent years. It seems that every other house in Palm Springs has a golden barrel or two in front. 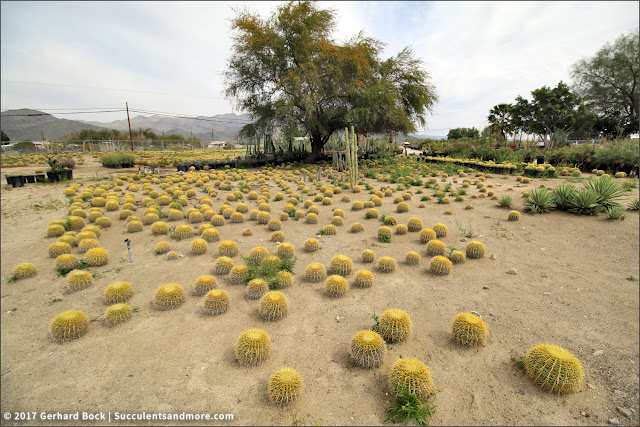 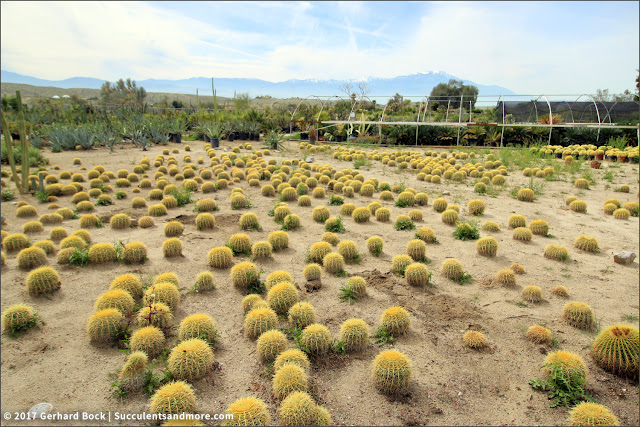 So there you have it: Another massive cactus and succulent nursery in the Inland Empire. I wonder if these places are as special to the people living there as they are to visitors like me?

My lone purchase: a 1-gallon Euphorbia tirucalli 'Sticks on Fire' with beautiful coloration. Bargain-priced at $6. You can see it here (first photo).