- April 28, 2017
Last Saturday was the Garden Conservancy's first Open Day of 2017 in the San Francisco Bay Area. Four gardens were open for touring in the East Bay (Berkeley and Oakland). I had visited two of them last year, including ceramic artist Marcia Donahue's personal oasis, so I skipped them because my time was limited (and I already had planned a stopover at Annie's Annuals for the drive home to Davis).

Of the two gardens I did visit on Saturday was one in Berkeley listed in the Open Days Directory under the intriguing moniker Pseudonatural Freakshow. Here is how it was described:


My garden began as an effort to develop my yard as habitat for birds and other winged life, shaped by the natural spaces I love to visit. Though originally stocked with many plants that provide food and nesting material for birds, it is being filled in more and more with the strange and fantastic plants that catch my eye. I’ve tried to make a garden that feels like Nature is—if not actually winning—at least making a good showing. The 5,000-square-foot back garden is the oldest part and is mostly multi-storied verge areas to appeal to birds. A creek on our northern border is part of a natural flyway for birds. Aesthetically, I pay attention to site lines and plant combinations, especially those with interesting foliage. I like to start with wide pathways and then allow the plants to encroach. My aesthetic is definitely naturalistic, but I make no effort to be geographically correct nor do I favor California natives for any reason other than their individual, inherent excellence. Our house is in an old frumpy warehouse where my wife does her artwork. So there is little relation between it and the garden and very little by way of views out to the garden from inside. Most everything in the garden was made by me from repurposed materials including an urbanite courtyard off our backdoor made from the concrete demo’d from a school basement where I taught during an earthquake retrofit. The redwood staves from an old water tower were used to make decking, fencing, and a smaller storage shed. More reclaimed materials went into building a forty-foot pergola over the front garden, more raised beds, and many sitting areas. Plants include succulents, bromeliads, begonias, roses, echiums, solanums, phormiums, fruit trees, passion vines (including an older Passiflora membranacea), a wide range of herbaceous and woody plants including many from the cloud forest like Telanthophora grandifolia, Salvia wagneriana, Abutilon tridens, Iochromas, agapetes, fuchsias, brugmansia, and Deppea splendens.

I was hooked, but I had no idea what to expect. The sliding gate at the entrance to the garden definitely had a light-industrial vibe. And the building itself did look like a generic commercial space. 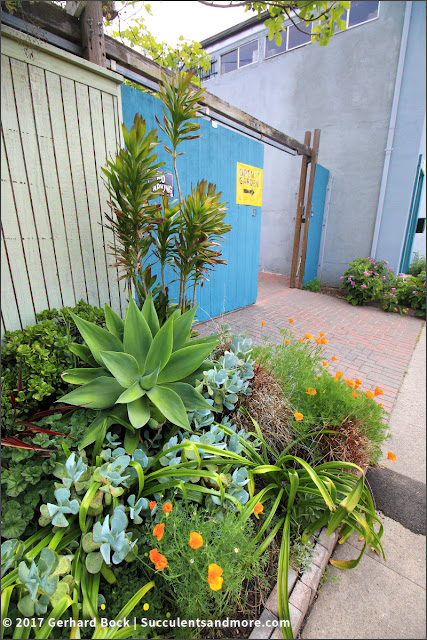 The area inside the gate was much different from what the outside suggested: open, bright, and sunny (well, whatever passed for sunny last Saturday). A clump of Echium 'Mr Happy' were indeed happy in the middle of the courtyard. 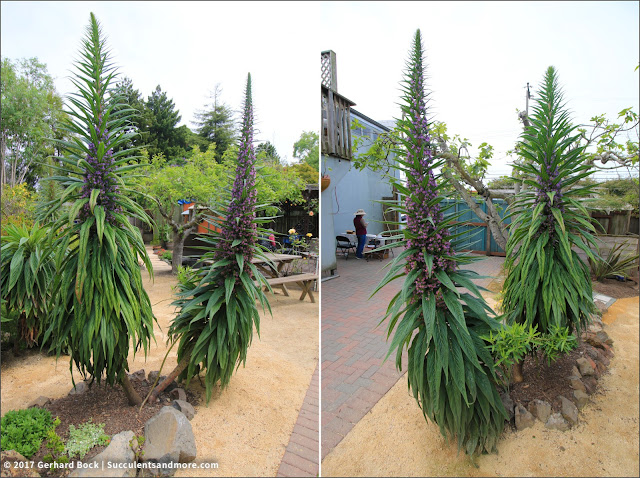 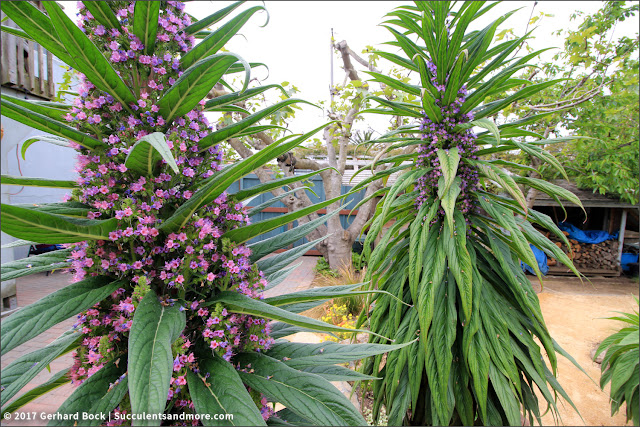 'Mr Happy' is a cross between two Echium species, Echium wildprettii (the ubiquitous tower of jewels) and the rarer Echium pininana. I will forever associate 'Mr Happy' with Annie's Annuals; I don't know if they created this hybrid but they have popularized it in Northern California.

As it turned out, I would see quite a few other Annie's Annuals plants in this garden--further proof of how influential Annie Hayes' nursery continues to be in Bay Area gardening circles. The white-flowering form of Geranium maderense in the photo below is an Annie's Annuals introduction.

I was pleased to find this beautiful clump of Mexican weeping bamboo;


My own specimen is in a wooden half barrel, and while it has survived for 8 years, it's never really happy. It wants to be in the ground where it can spread at will. Unfortunately, I don't have a good spot for it.

I was also happy to see a couple of newly planted pin cushions (Leucospermum cultivars) near the Mexican weeping bamboo. Here's one of them:

Walking from the front to the back garden, I passed through a corridor in a small standalone structure. I don't really know how to describe it. There was a day bed with mosquito netting in a small alcove to the right. On the left, a window with an ornamental metal insert but no glass offered a good view of Strawberry Creek, remarkably wild-looking although we're in the middle of an urban area. This was my favorite vignette in the garden because it had such an air of mystery about it. 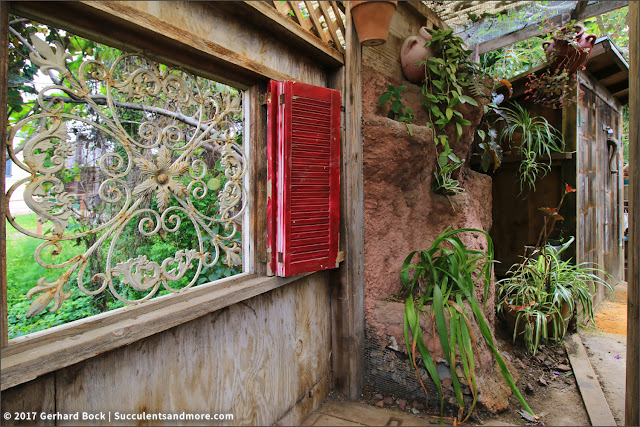 Now we're in the back garden. While the front was open and airy (and is clearly still a work in progress), the back is lush, shady and mature. I can only imagine how nice it must be to hang out here on a hot summer day--provided they have those in Berkeley.

In the photos below I give an ID where I have one. Fortunately,  a helpful plant list created by the owner was available upon request. I wish more gardens would do that.

I don't know if officially there's such a thing as the Bay Area style of gardening, but this garden definitely fits the esthetic. I'm always envious of how effortlessly zone 10 gardeners can grow plants that are challenging for me, like those leucospermums, aeoniums, tree euphorbias, etc. 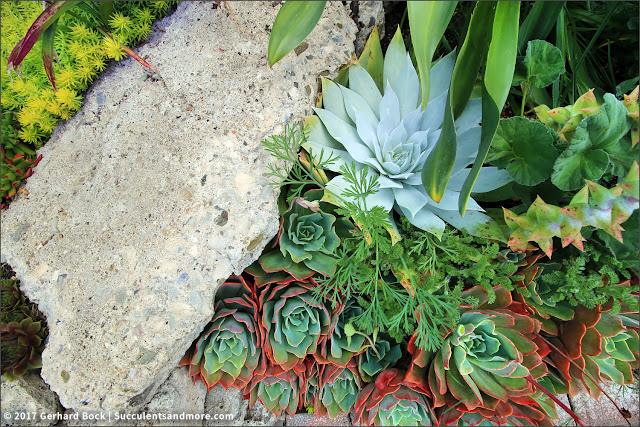 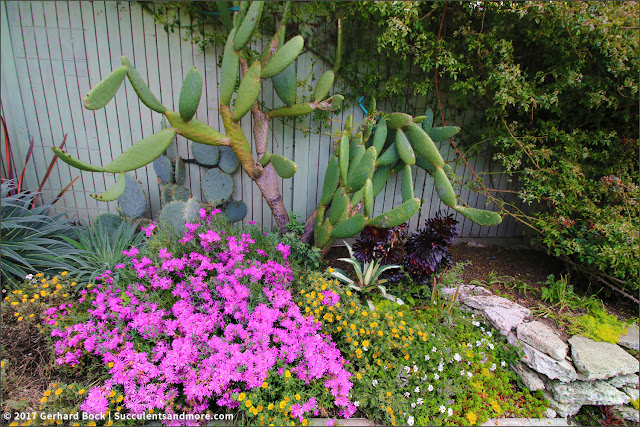