The Bold Dry Garden: Lessons from the Ruth Bancroft Garden

I’ve read countless book on plants and gardens, and I’ve reviewed a few for this blog. Many of them struck a chord with me for one reason or another. But no book has even been as personal as the one I’m reviewing today, The Bold Dry Garden: Lessons from the Ruth Bancroft Garden. Why? Because the Ruth Bancroft Garden (RBG) in Walnut Creek, just about an hour from my house in Davis, is my happy place. I love the plants, but more than that, I love the spirit of the garden. I knew the story of the garden in rough strokes, but after having read The Bold Dry Garden, I have much better insight into how it came to be and what Ruth Bancroft set out to do. 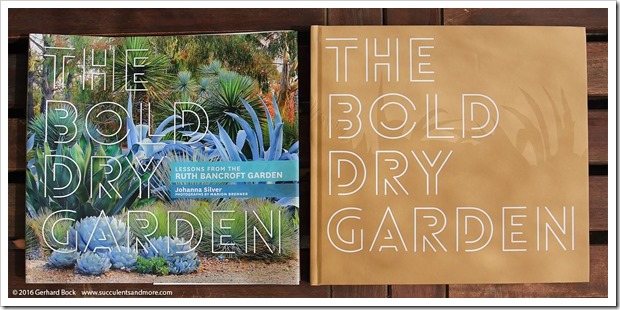 Kudos to the Timber Press design team on the very attractive layout of the book, including the choice of font for the cover.

The Bold Dry Garden was written by Johanna Silver, the garden editor of Sunset Magazine. Sunset is headquartered in Oakland, a 20-minute drive but apparently a world away. “Before I started on this book, I had never been to the Ruth Bancroft Garden,” Johanna admits in the very first sentence of the preface. And on her first visit, she became worried that the garden might be too small (3 acres) to yield enough material for a book. But when she began to dive into the story of Ruth Bancroft and the garden she started when she was 63 (!) years old, Johanna realized that “[Ruth’s] ‘small’ garden was too big and too full for me to ever fully grasp.” Johanna and master garden photographer Marion Brenner would visit the garden every Saturday for a year. That commitment and dedication is evident in every sentence and every picture. 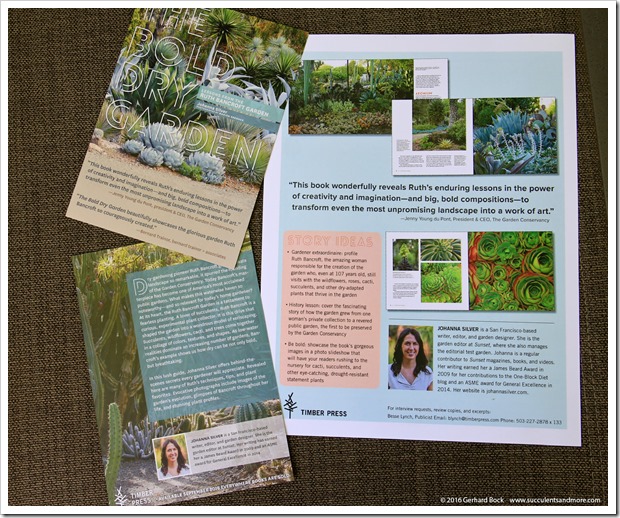 Promo materials for the book

While you might think that a book about a garden is primarily about plants, it quickly became clear to me that this one is first and foremost about people. About Ruth Bancroft, the passionate collector of plants and knowledge who started what we now know as the RBG at a time in her life when other people think of retiring. About curator Brian Kemble, the world expert in aloes, gasterias, agaves and many other succulent genera, and a walking botanical encyclopedia, who has been working at Ruth’s side since 1980. And finally the next generator of plantsmen who will be the garden’s stewards going forward, including assistant curator Walker Young whose knowledge is matched only by his energy, and Ryan Penn who specializes in California natives and southern hemisphere shrubs and is expanding the plant palette represented at the RBG. I know how hard they work for the garden, and I was happy to see Johanna giving them the acknowledgement they so deserve. 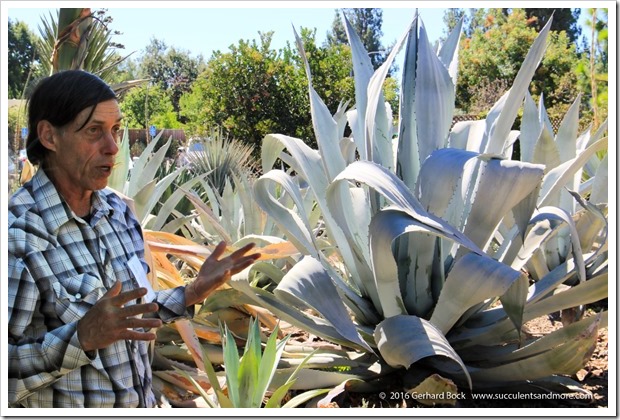 Garden curator Brian Kemble next to Agave franzosinii, one of the RBG’s signature plants

Troy McGregor, the nursery manager, is mentioned briefly. I’d like to give him a special shoutout for turning what originally was a small area with a limited selection of plants into one of Northern California's leading specialty nurseries for succulents, Australian and South African shrubs, and desert trees. These offerings allow the public to create their own version of a dry garden at home. 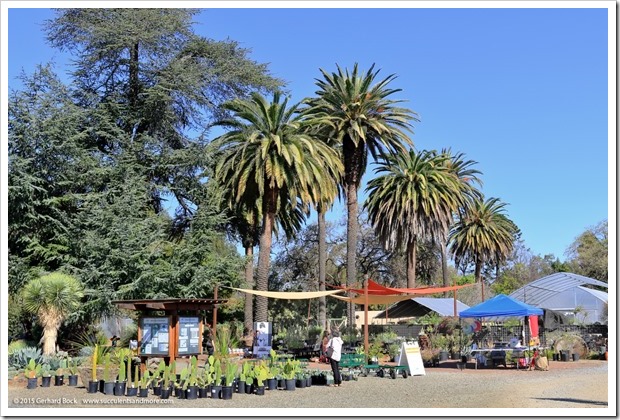 But back to the book. It’s divided into four main sections: “Meet Ruth,” “The beginning of the dry garden,” “Gardening in the spirit of the founder,” and “Signature plants of the dry garden.” The first two are about the past, the third is about the present and future, and the fourth (roughly half the book) is about the plants that make the RBG so special. 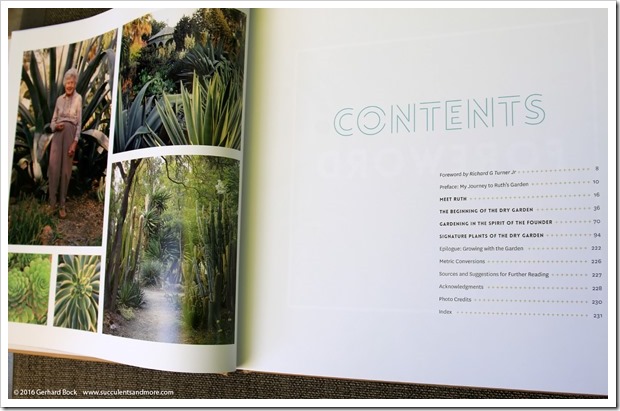 “Meet Ruth” is a vivid biography of Ruth’s life accompanied by photos of her and her family. I was struck by the high quality of these old photos, even the ones showing Ruth as a young child. Bear in mind that Ruth was born in 1908, 108 years ago (she celebrated her birthday a few days after the media preview event for the book). While I know that she’s a centenarian, in my mind she’s ageless. That’s why it was a bit startling to read that she enrolled at UC Berkeley in 1926, almost forty years before I was even born. She wanted to study landscape architecture but her parents convinced her to pursue traditional architecture (even in that program 48 out of the 50 students were men). The stock market crash of 1929 put an end to Ruth’s professional dreams, and she switched to a safer career as a home economics teacher. But her landscape design ambitions didn’t die, they simply lay dormant until the time was right. That wouldn’t be for another 30 years, but Ruth was nothing if not patient. 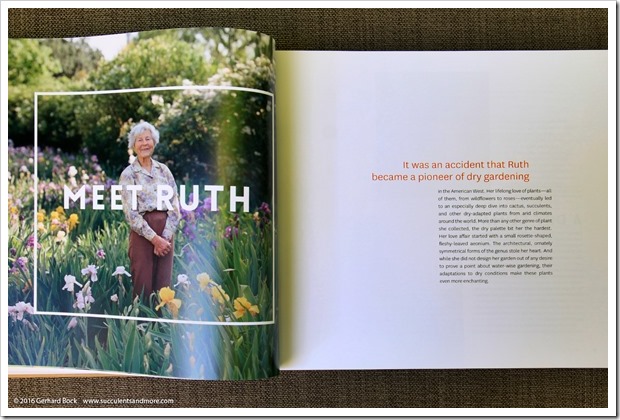 In 1939, at age 30, Ruth married Philip Bancroft Jr. whose family had owned a 400-acre ranch in Walnut Creek since the 1880s. The ranch was a highly successful operation, growing Bartlett pears and walnuts. Ruth and Phil first lived next door to his parents in what was known as the Swiss Chalet. After their death, they moved into the main house. That’s when Ruth began to dedicate herself to the gardens on the property. She established collections of hybrid tea and shrub roses, scented pelargoniums, and especially irises, which she had loved since her early childhood days in Berkeley. Even now, iris enthusiasts visit in the spring time to marvel at the breadth of cultivars Ruth has amassed. With her penchant for meticulous recordkeeping, there is a precise record of what was purchased where and planted when.

Ruth’s fascination with succulents began in the 1930s, long before she obtained her first actual plant. Over the next few decades, Ruth patiently snipped and archived articles about succulents. Finally, in the 1950s, at an estate sale of all places, Ruth bought her first succulent: a small aeonium hybrid (Aeonium ‘Glenn Davidson’). Today, this particular hybrid would be considered unremarkable, but back then, when very few succulents were available in Northern California, it stirred something powerful in Ruth and would mark the birth of her dry plant collection. 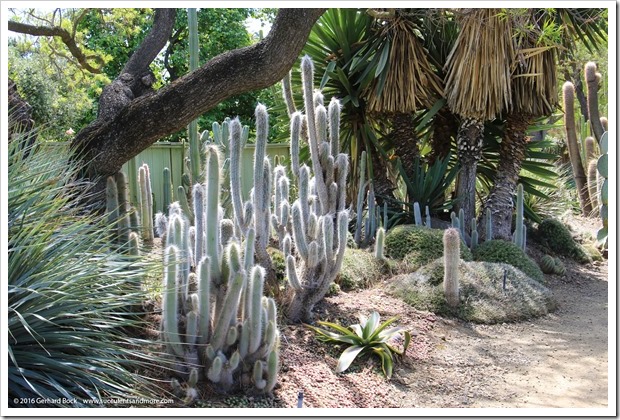 Through the 1960s, driven by endless curiosity and a thirst for knowledge, Ruth amassed a large collection of succulents, all of them in small terracotta pots. They quickly filled the small greenhouse next to Ruth’s and Phil’s home, and eventually the wood-and-corrugated-plastic shade houses Phil built for her.

In 1971, the last of the walnut orchards on the Bancroft ranch was cut down because the trees were diseased. Ruth finally had room (3 acres) to create an actual garden where many of the plants from her collection of more than 2,000 potted succulents could be put in the ground. Phil only had one condition: They would not dig a new well and they would not tap into city water. So even though water restrictions and water-wise gardening were not on their minds, the Bancrofts essentially created a sustainable garden perfectly adapted to Walnut Creek’s Mediterranean climate. In those days, when expanses of oft-watered and well-manicured lawns were the gold standard, a dry garden was anything but common in Northern California. 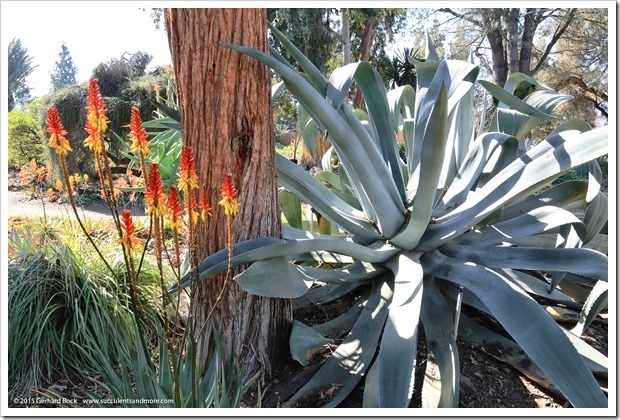 The garden was laid out in a series of beds surrounded by walking paths at least three feet wide to allow Ruth to study her plants up close from all sides. Knowing that her succulents would perish in Walnut Creek’s heavy clay soil, Ruth created mounds to ensure excellent drainage—standard practice now. Virtually all the plants that went into the ground were from containers 1 gallon in size or smaller. This includes the iconic California fan palms (Washingtonia filifera) near the Folly that are 50 feet tall now.

Many plants were known to be slow-growing. At the time, people questioned Ruth’s wisdom, thinking she would never see them grow to maturity. She would respond, “Well, who cares if I’m around or not? Someone will be around. And if I don’t plant it then nobody will get to see it.” It’s this attitude towards life, this patience, foresight and fearlessness, that formed the foundation for Ruth’s dry garden. She didn’t create her garden for anybody but herself. She had nobody to convince or impress. She never anticipated it to be a public garden that would provide inspiration to thousands. And yet, Ruth always thought beyond herself. 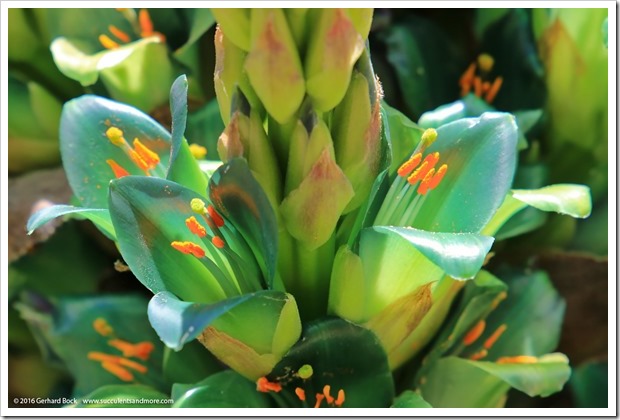 In 1989, after visiting Ruth’s garden, plant collector and horticulturist Frank Cabot founded the Garden Conservancy, a nonprofit organization dedicated to “saving and sharing outstanding American gardens.” After raising money for preservation and maintenance, Ruth’s garden was officially transferred to its own nonprofit, the Ruth Bancroft Garden, Inc., in 1994, becoming the Garden Conservancy’s first affiliated garden. If it hadn’t been for Frank Cabot’s vision, who knows whether Ruth’s garden would have survived. The pressure to sell to developers at a pretty penny might simply have been too strong. I, for one, will forever be grateful that goddess Flora looked out for us!

The above is just a capsule summary of Ruth’s life and the history of the garden. The Bold Dry Garden goes into much more detail, including a harrowing description of the 1972 freeze that wiped out a large part of Ruth’s newly planted collection. (Ruth, never one to give up or give in, simply replanted.) Johanna’s lucid prose brings the past alive and is as exciting to read as a good novel. This level of writing not something I take for granted in a garden book. 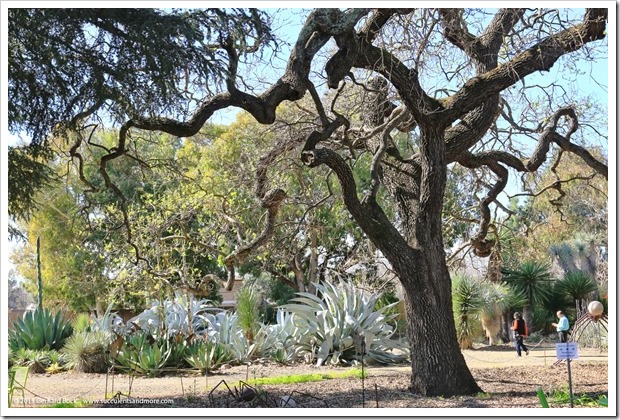 The second half of the book is dedicated to the plants that make up the bulk of the RBG’s collection: aeoniums, crassulas, echeverias, haworthias, sedums, sempervivums, agaves, cactus, yuccas, ice plants, aloes, euphorbias, gasterias, proteas, terrestrial bromeliads, California natives, and finally trees. While the first half of the book is more text heavy, this section allows ample room for Marion Brenner’s luminous photographs. I’ve taken many pictures at the RBG over the years, but I’m always at the mercy of the weather on any given day, in addition to whatever other constraints there might be. Marion was fortunate to have the gift of time and access. As I mentioned earlier, she and Johanna visited the garden every weekend for an entire year. This gave Marion ample opportunity to see the garden at its best in all four seasons. And she fully took advantage of that: Nobody has ever captured the RBG as sensitively and as beautifully as she did. 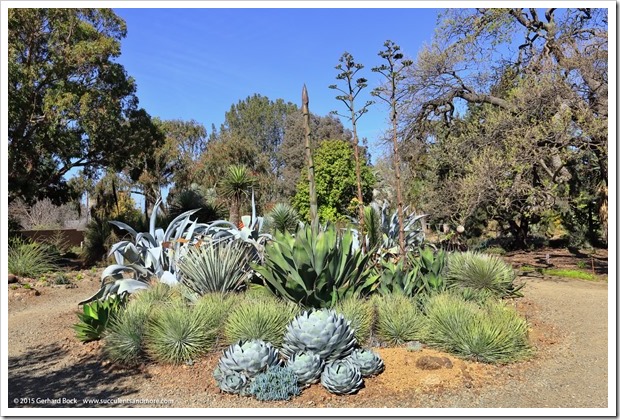 I was able to meet Marion and spend some time talking to Johanna at the Timber Press media event. I quickly realized that this book was more than just another writing and photography assignment; it was a true labor of love. Johanna’s and Marion’s passion for the garden shines on every page, and by the time I reached the end of the book, I was even more inspired by Ruth and her legacy than before.

I've been raving so much that you might think this book is perfect. It isn't. There's a typo on page 75 (Aloe humulis instead of humilis).

The Bold Dry Garden will be available on October 5 in bookstores and online. Instead of waiting, you can get a copy now from the Ruth Bancroft Garden (more details here). All pre-purchased books will be signed by Ruth Bancroft and all proceeds will go straight to the garden. 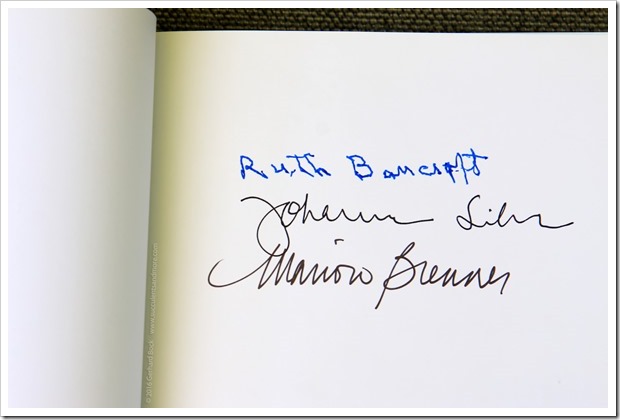 Note: Timber Press provided me with a complimentary review copy of The Bold Dry Garden. Otherwise I would have purchased it at the earliest opportunity.