Evening in downtown Victoria, BC

It still hasn’t sunk in that daughter #1 is now a student at the University of Victoria (UVic) and will live here for at least four years. Out of all the places she could have picked to go to college, Victoria certainly is one of the most scenic. Yes, people say Victoria is for the “newly wed and nearly dead,” but, if anything, that underscores what a beautiful spot on earth this is.

Since we flew to Victoria (3½ hours from Sacramento, provided you get a good connection in Seattle), Laura was only able to bring a limited amount of stuff. We’ve been busy getting her necessities ranging from bedding, toiletries and school supplies to a printer and a dorm fridge (yes, that’s a must-have these days). In light of a very attractive Canadian dollar, some things seem like a bargain while others are surprisingly expensive. Overall, though, going to school in Canada is such a good deal financially that I’m surprised there aren’t even more students from the U.S.

Aside from a two-day trip to Tofino on Vancouver Island’s west coast, we’ve been sticking close to Victoria—not that that is a bad thing. Here are some photos I took in downtown Victoria on Saturday evening. We found parking near St. Ann’s Academy, an all-girls school and convent until 1974 and now used by the British Columbia Ministry of Advanced Education. The light filtering through the trees was magical. 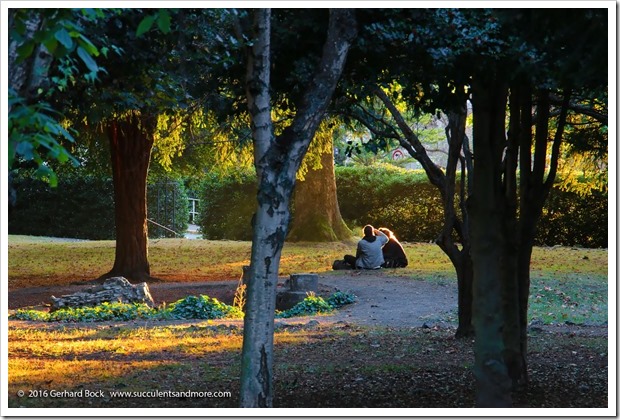 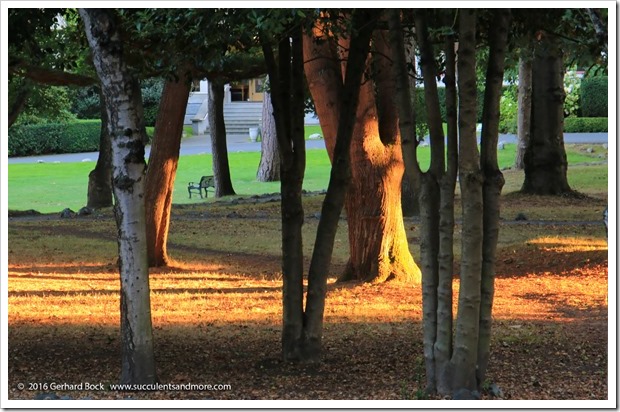 At the street corner was a large public planting typical of what you see in downtown Victoria. 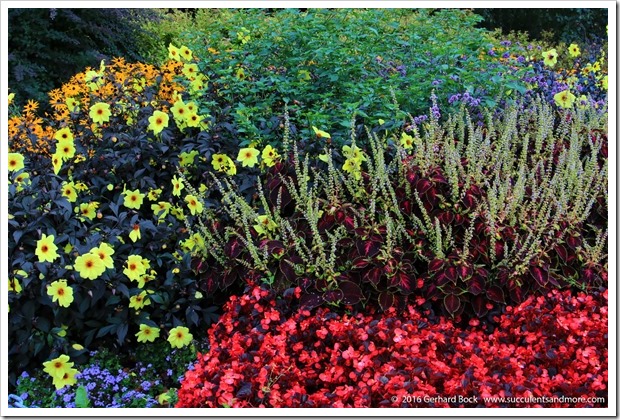 These plantings are quite elaborate. This is my third visit to Victoria, and while the plant selection seems to vary constantly, the plants themselves always look perfectly maintained. 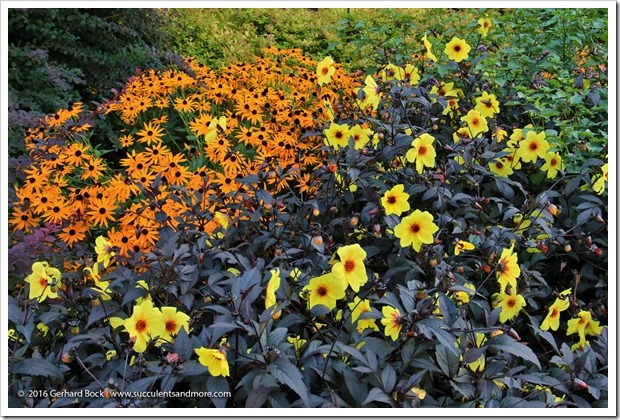 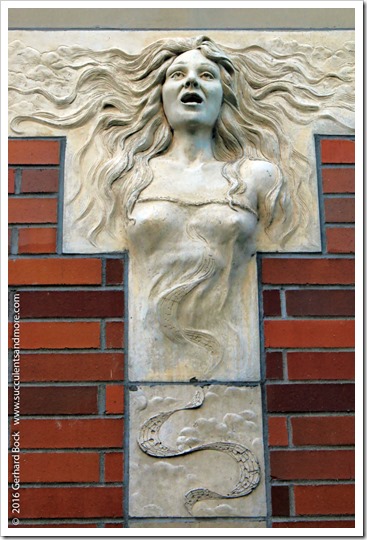 Seen on the façade of a building. I have no idea who this is, or what the significance is, but I loved it.

The Empress Hotel facing the Inner Harbour was covered in scaffolding during our April visit. Renovations appear to be complete now, and the hotel looks brand spanking new. The Empress is one of the most iconic hotels in Canada and one day we’ll stay there—maybe for Laura’s graduation from UVic in 2020 or 2021. That’ll give us time to save our pennies. 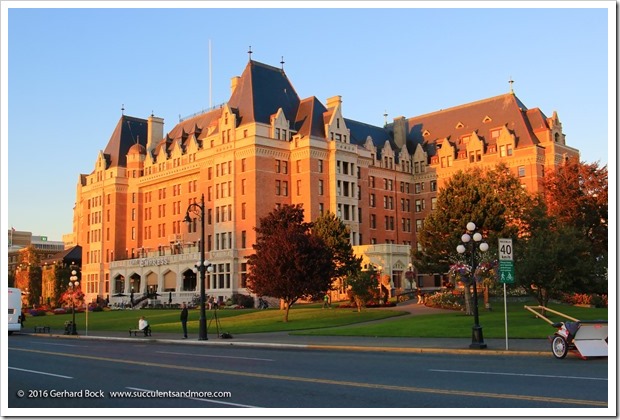 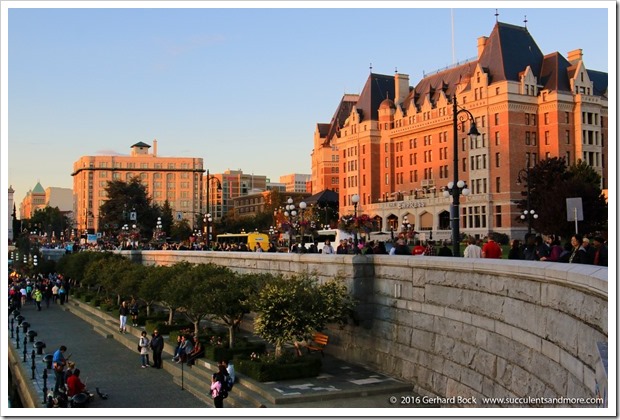 Catty-corner across the street from the Empress Hotel are the British Columbia Parliament Buildings, Victoria being the capital of the province of British Columbia. The plantings at this street corner are particularly lush. 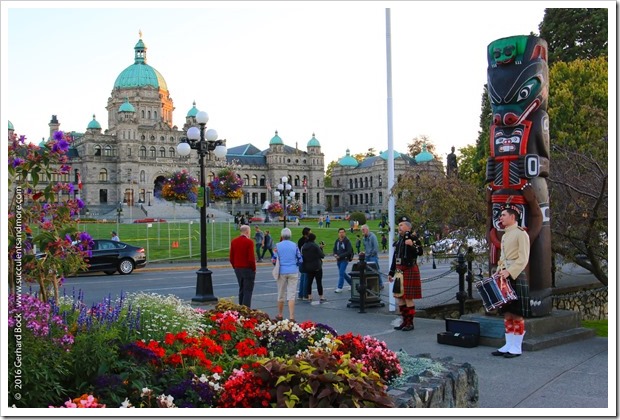 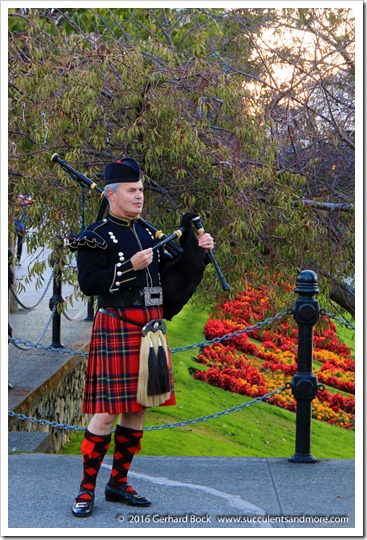 This time we even had live music, courtesy of this bag piper and his drummer friend. 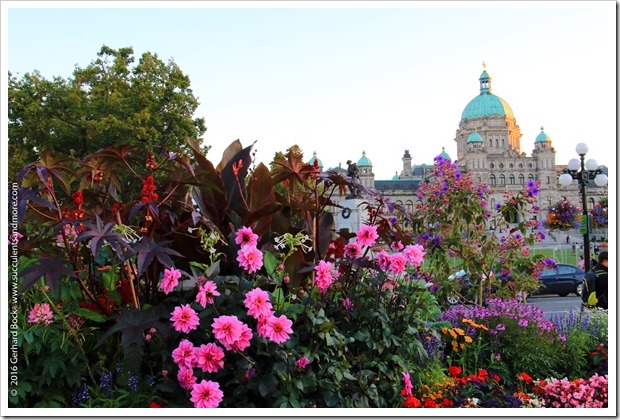 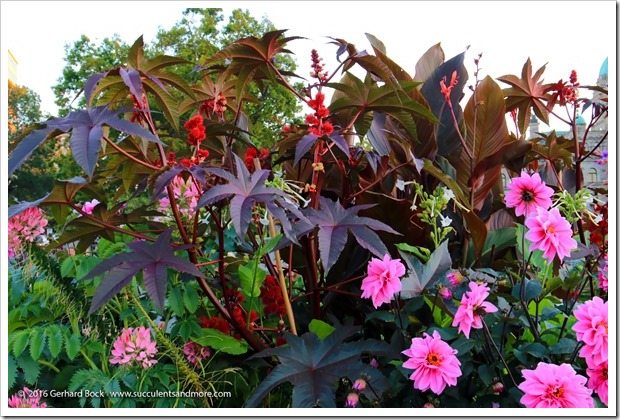 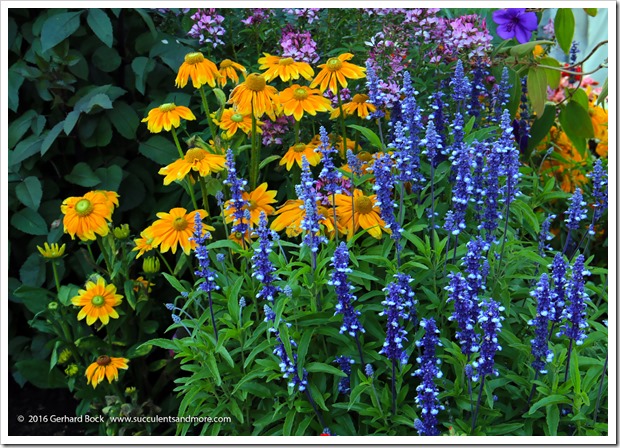 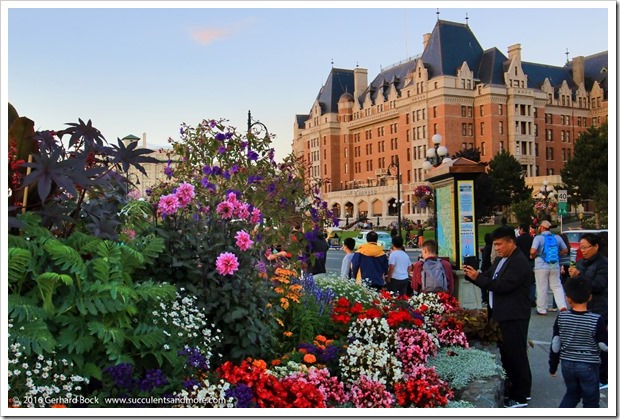 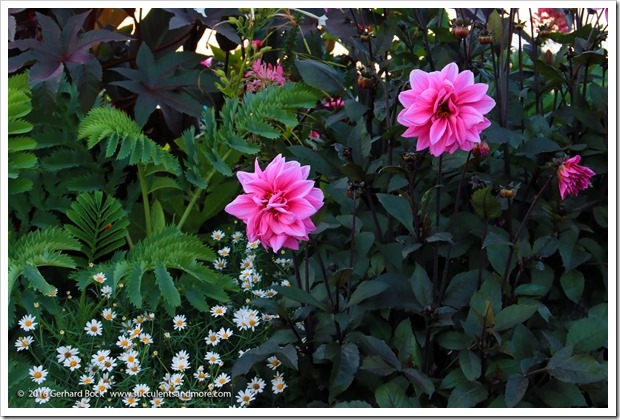 One of my favorite plant sightings in downtown Victoria was silver ponyfoot (Dichondra argentea). It struggles in the summer heat in Davis, but here it’s happy as a clam—creeping along the ground or dangling down from overhead planters. Maybe I need to accept the fact that it needs more water and a cooler climate to thrive. 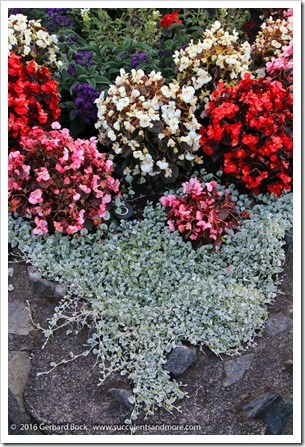 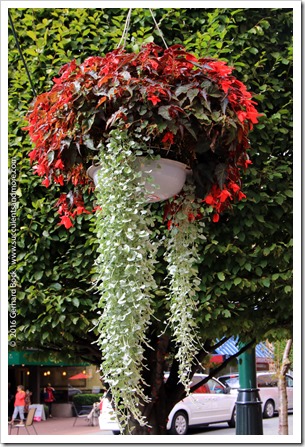 To wrap things up, here is a panorama that shows the Empress Hotel and the Inner Harbour:

And an enlarged version of the boats in the Inner Harbour: 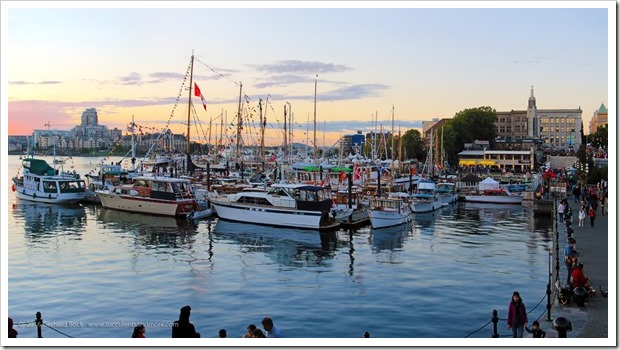 One of my favorite places to hang out in Victoria

And while we’re at it, here’s a map that shows where Victoria is relation to Vancouver, Seattle and Portland. As the crow flies, it’s about 825 miles (1325 km) from Victoria to Davis, California. 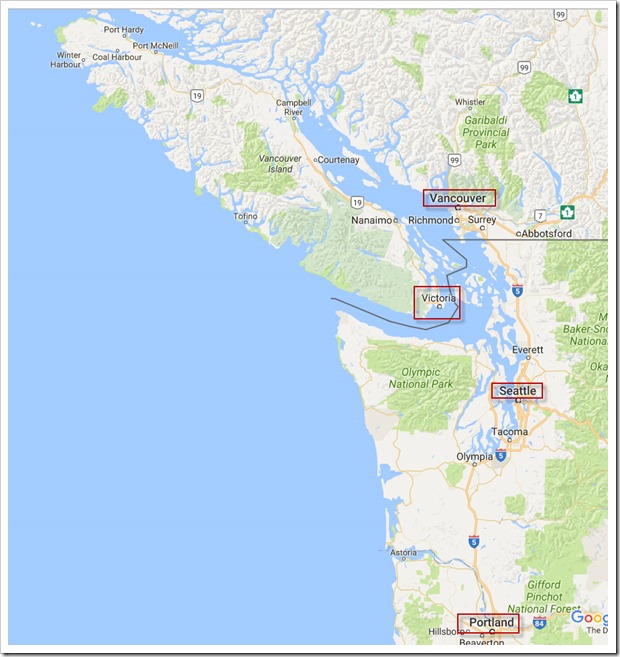 Victoria and Vancouver Island, BC, September 2016