I thought I would continue my coverage of the Garden Conservancy’s Spring 2016 East Bay Open Day, which I attended with fellow garden blogger Kathy Stoner of GardenBook. Not quite able to remember what day it had been, I started to look for my photos in the June 2016 folder on my hard drive. Nothing. What about May? Nope. But there’s no way it could have been in April, that was too long ago! Think again. It was in April, April 23, to be exact. I know that the older you get, the faster time seems to fly, but based on the experience I just had, I must really be getting old.

On that philosophical note, let’s check out Potomac Waterworks in a quiet Oakland neighborhood. I had visited this garden in June 2014 during another East Bay Open Day and had liked it very much. But I was in for a big surprise: While the front yard was pretty much the same, the backyard was radically different—and even better than before. 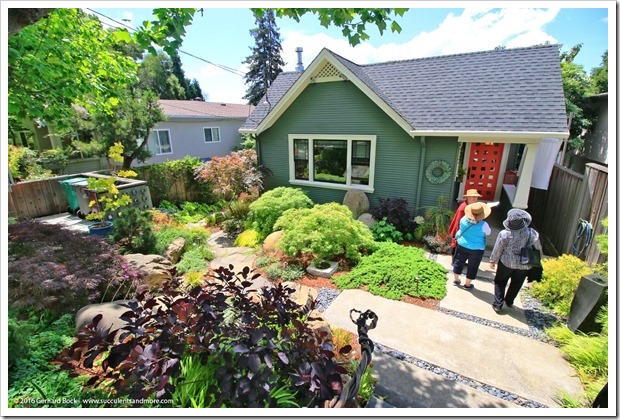 The house started life in the 1920s as a 700 sq.ft. cottage and was expanded several times by the second owners, Robin and Paul Cowley, beginning in the 1970s. Paul Cowley, a leading Bay Area designer of water features and pond systems for gardens, designed the garden as a private sanctuary. When I visited in 2014, the backyard featured a koi pond and a bog crossed by “floating” stepping stones, showcasing techniques he had pioneered over a 40 year career. Page down to see how it has changed. 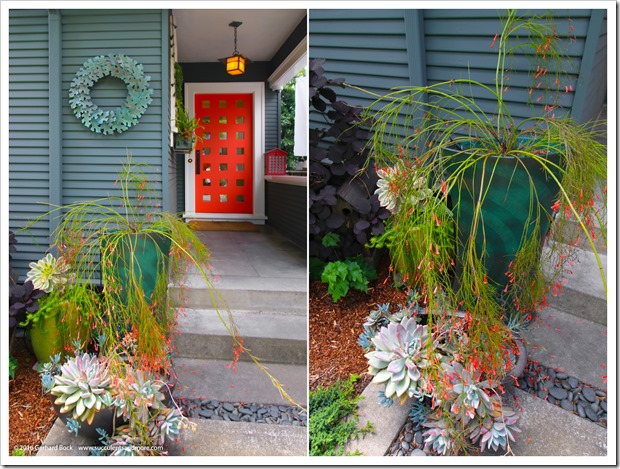 In addition to the impressive hardscape, Potomac Waterworks features some truly inspired plantings as well as judiciously placed outdoor art. The result is a garden that is eminently livable and intellectually engaging at the same time. 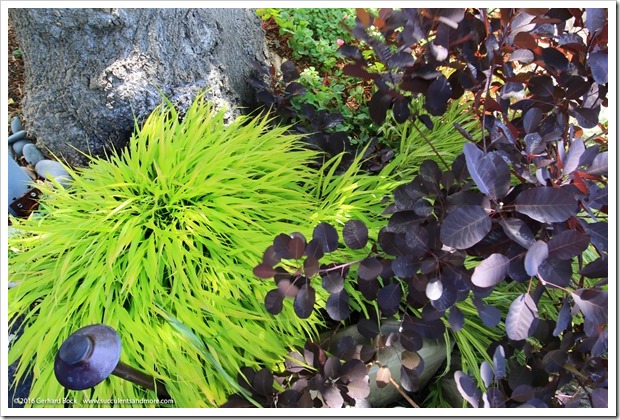 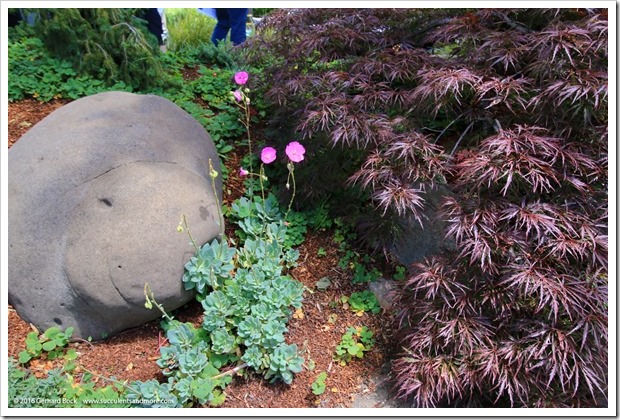 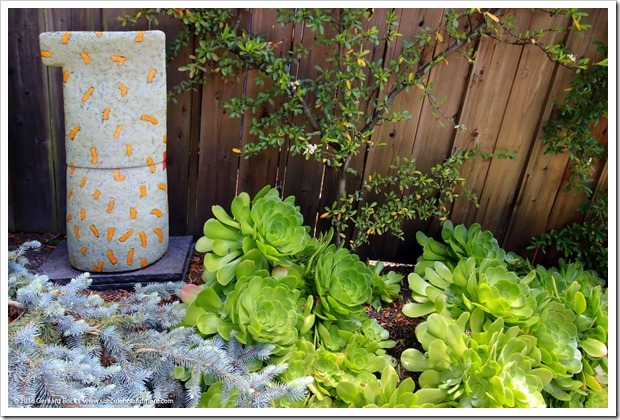 I don’t think I’ve ever seen succulents (aeoniums, in this case) mixed with conifers before (Picea pungens ‘Procumbens’). I really like the combination of icy blue and apple green!

As nice as the front yard and the side yard are, the true star is the backyard. How it has changed in recent years! Gone are the mayten trees and the koi pond. They were replaced by a ginkgo grove and low-maintenance ground covers. 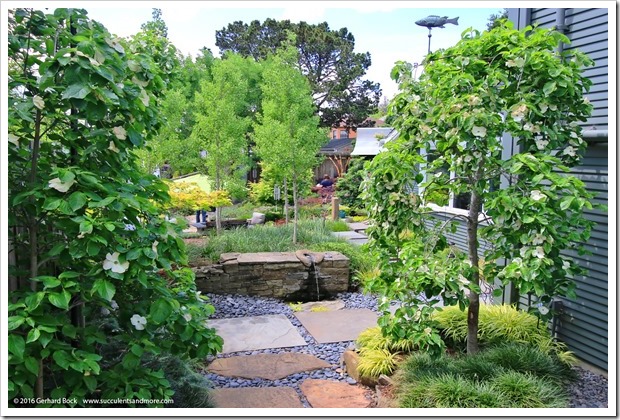 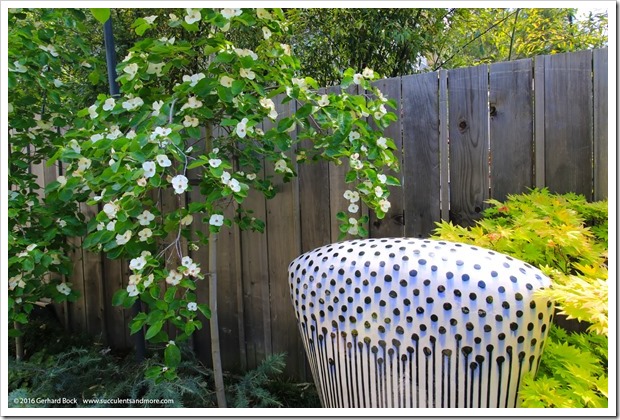 I had a chance to speak with Robin Cowley, the homeowner, and she said that a big branch of one of the mayten trees broke off and almost fell on the house. This led her and her husband to rethink the entire landscape design. Coupled with a desire for less maintenance, they decided to radically overhaul this part of the garden and plant slow-growing ginkgos instead. 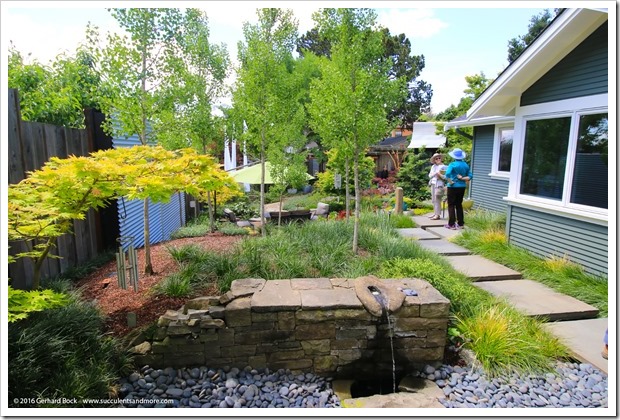 The bog outside the studio, crossed on large bluestone stepping stones, is still there. I found it as intriguing as ever. Lest you think this feature wastes a lot of water, the bog is actually a shallow 6-inch tray with a sheet liner. Each bluestone slab “floats” on adjustable pedestals. 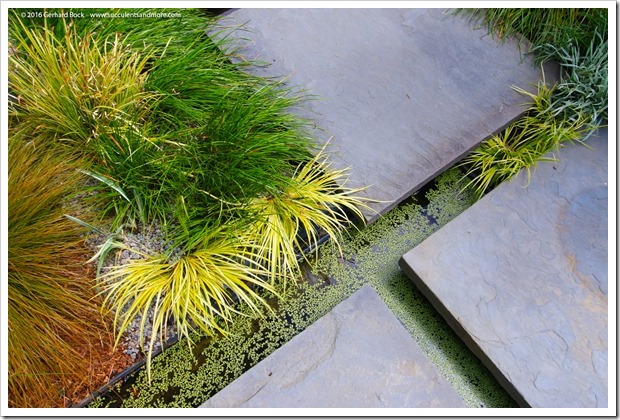 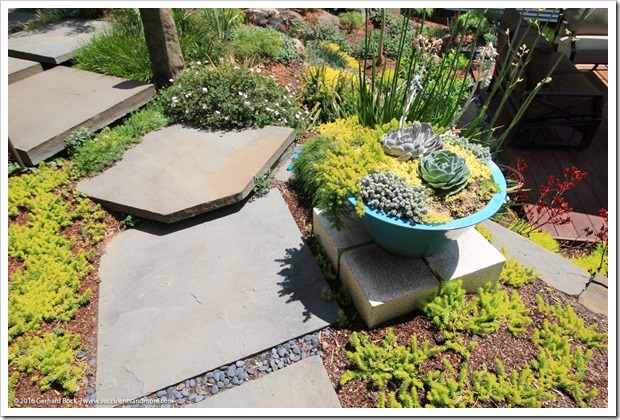 Succulents don’t play a big role, but there are assorted aeoniums and echeverias. 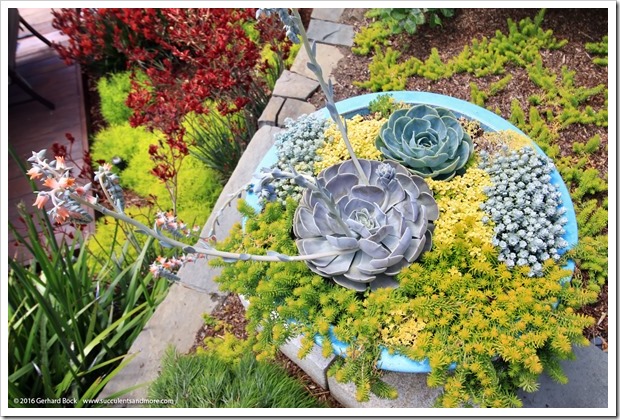 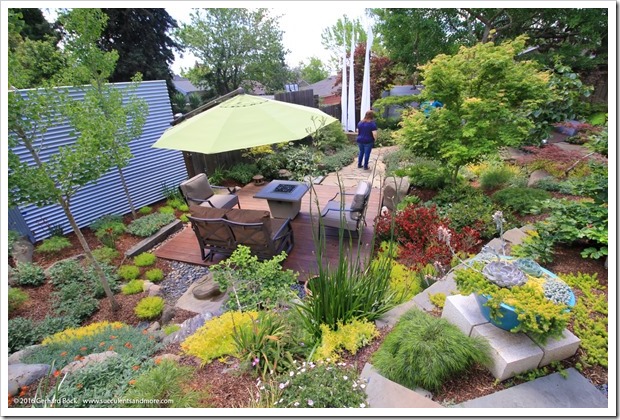 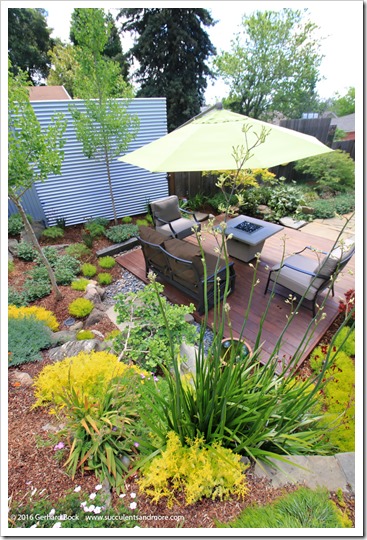 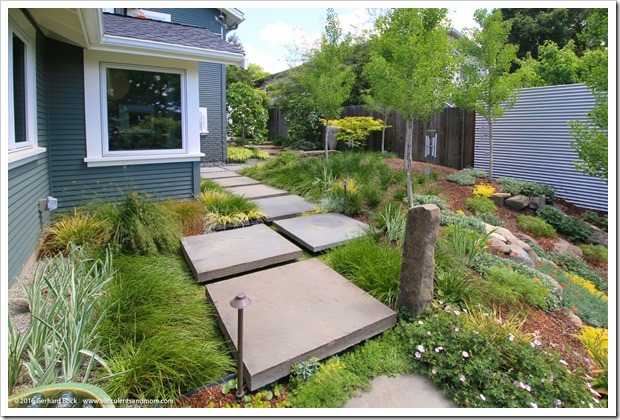 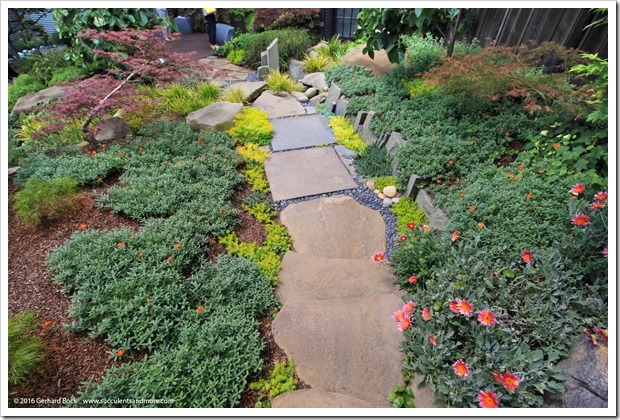 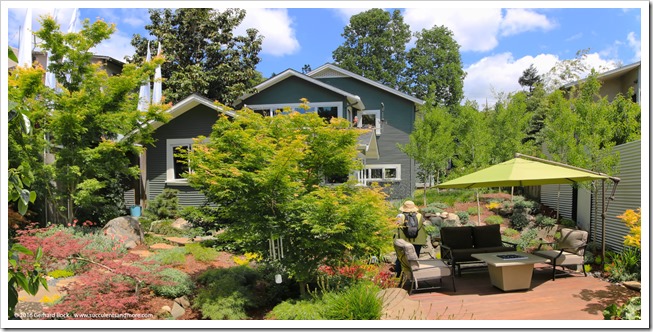 The lower corner of the garden has a decidedly Asian feel: 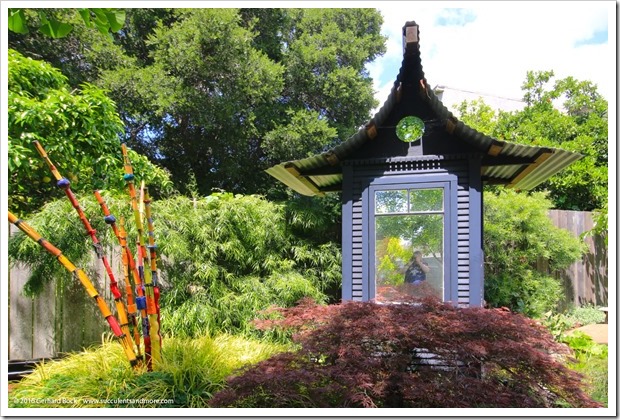 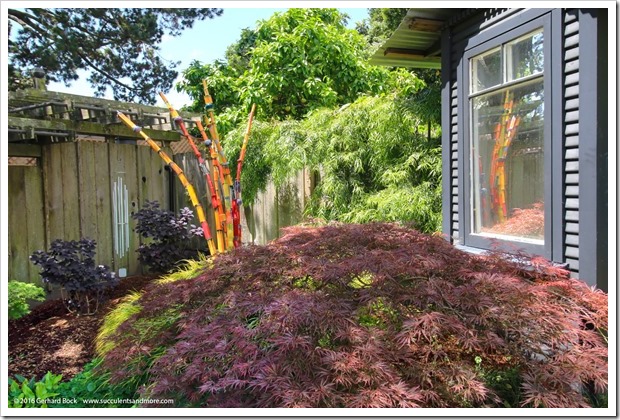 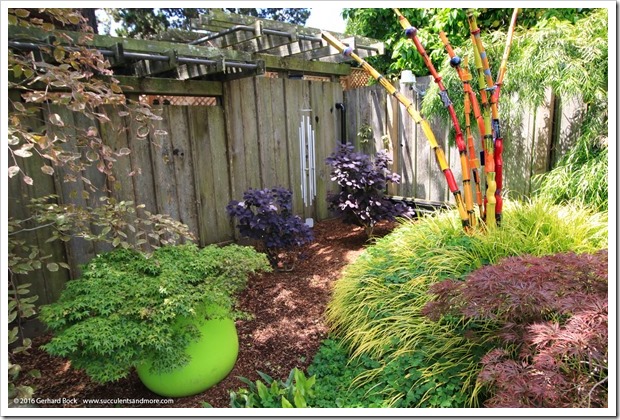 More art is incorporated along the far fence: 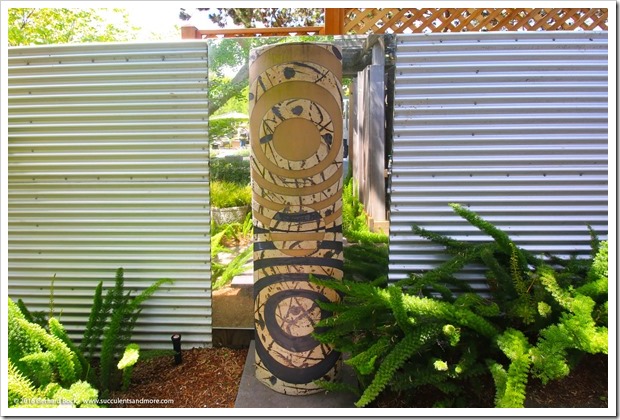 A grouping of bluish glass balls reminiscent of soap bubbles was a surprise find under a tree: 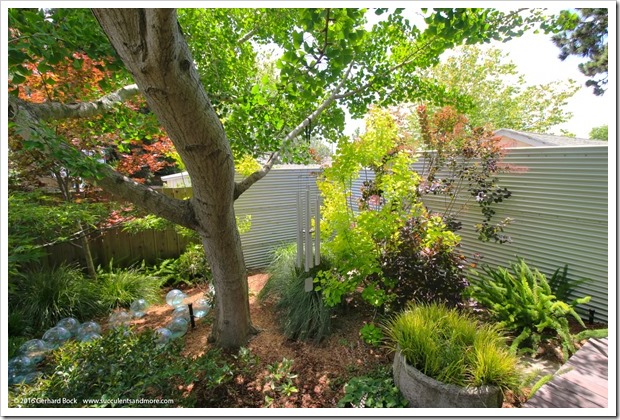 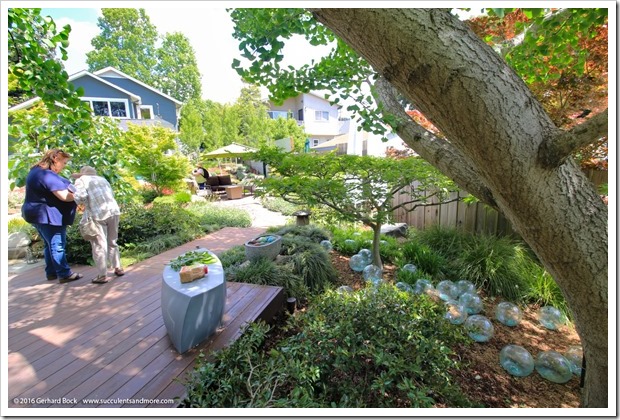 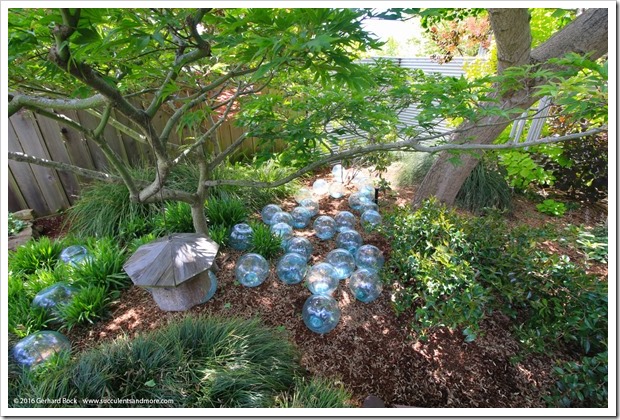 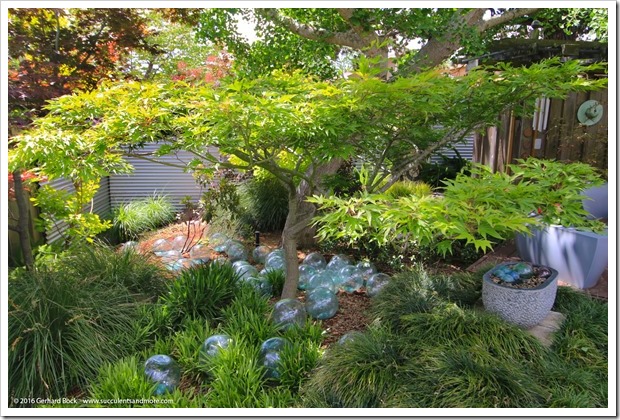 View from the middle tier of the garden towards the house and the street above it: 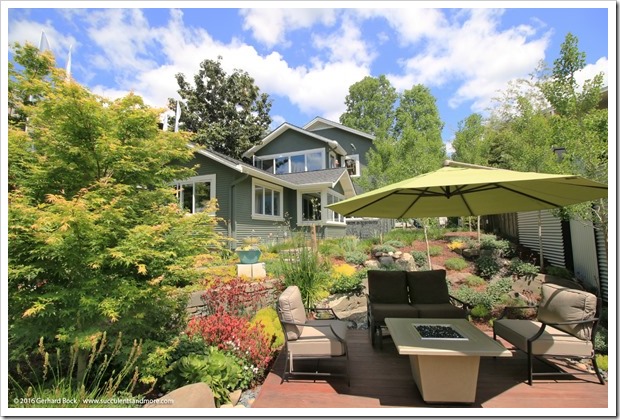 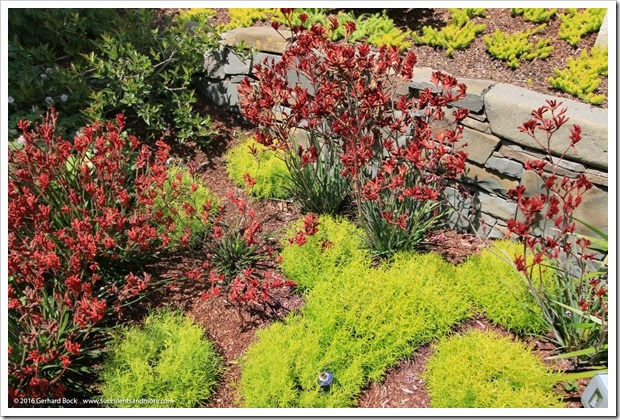 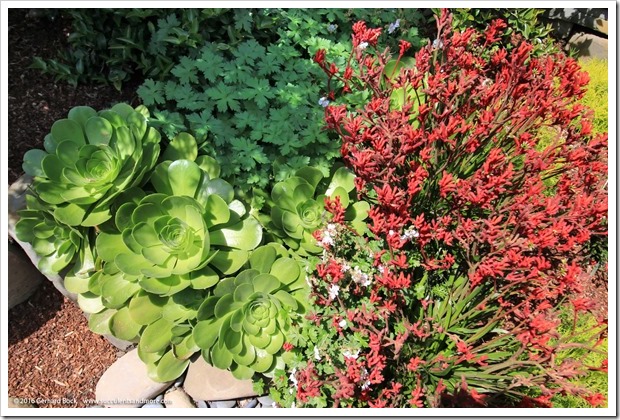 This is one of over a dozen Japanese maples: 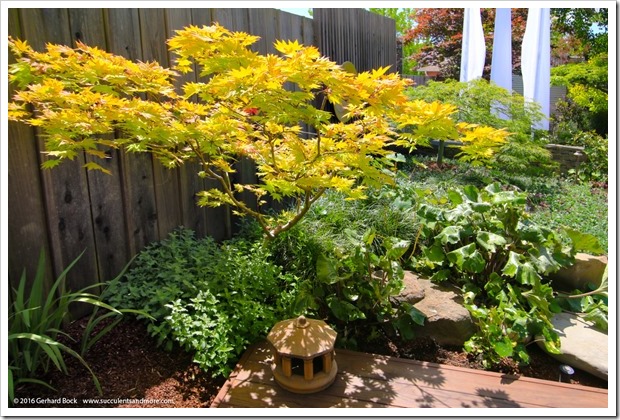 View of the ginkgo grove from the seating area you saw earlier: 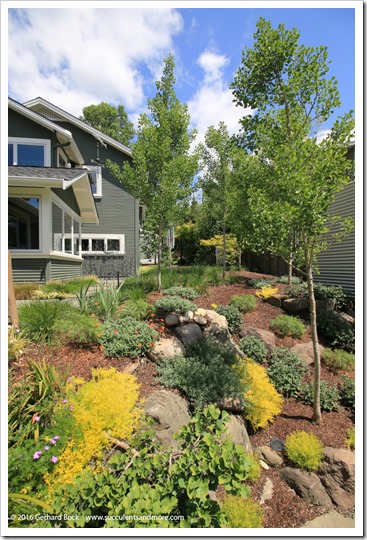 In talking to the homeowner, Robin Cowley, I found out that this backyard redesign was her and her husband’s swan song: They had just sold the house (it was in escrow during the garden tour) and were getting ready to move to a home on the Alameda waterfront. The new owners apparently like the landscaping (maybe it was the reason why they chose this property?), but nobody knows whether this garden will ever be open to the public again. I’m so glad I got to see it twice!