Book review: Protea: A Guide to Cultivated Species and Varieties

Writing more book reviews is always near the top of my want-to-do list for this blog. I don’t have a good reason why I haven’t followed through, but I promise that I’m going to do better. And it will start right now.

Years ago I became interested in the protea family (Proteaceae), which includes my favorite shrubs such as proteas, leucadendrons and leucospermums from South Africa, and grevilleas and banksias from Australia. However, the authoritative reference book on these wonderful plants, The Protea Book: A Guide to Cultivated Proteaceae by Lewis J. Matthews (Timber Press 2002), was long out print and was commanding astronomical prices on the second-hand market.

Fortunately, Lewis Matthews has now written a new book that is both an update and a sequel to the original: Protea: A Guide to Cultivated Species and Varieties was published in June 2016 by University of Hawai'i Press. 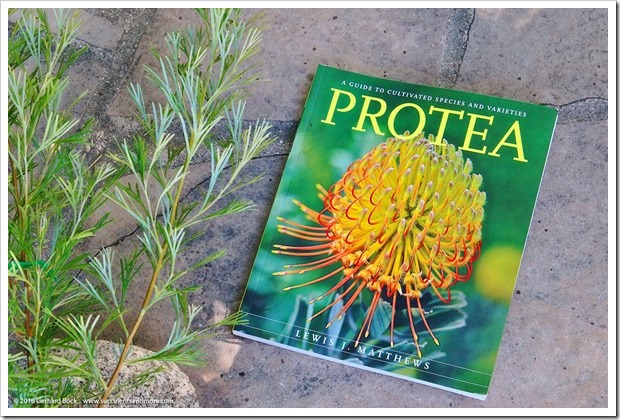 On the left: Grevillea ‘Flora Mason’

At 232 pages, it’s not a massive tome but it includes a wealth of information—and over 300 truly spectacular photographs taken by the author.

The 8½ by 10 inch paperback is divided into six main sections: “Introduction,” “Cultivating Proteas,” “Proteas in the Garden,” “The Bird Attractors,” “Proteas as a Cut-Flower Crop,” and “Identification” (a well as several appendices). 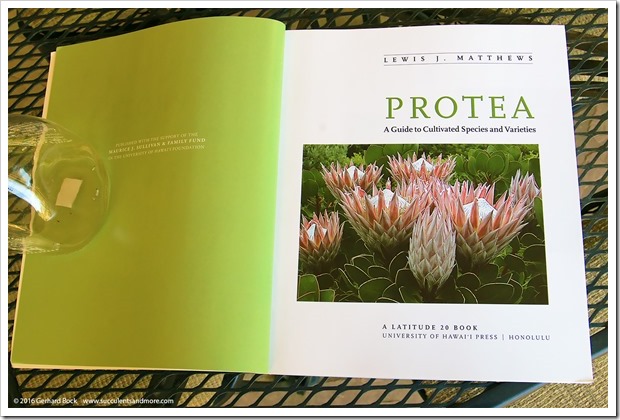 Strictly speaking, “Cultivating Proteas” is the most important section in the book. Nothing else matters if you can’t give your newly purchased beauty what it needs. Matthews spends ten pages on this crucial topic, covering things like soil types and drainage, pH, water, nutrient requirements, planting positions and frost. Pruning is described in some detail as well, broken down by genus. 2½ pages are dedicated to propagation, a field in which Matthews, as the former owner of a protea nursery, has over 40 years of experience. 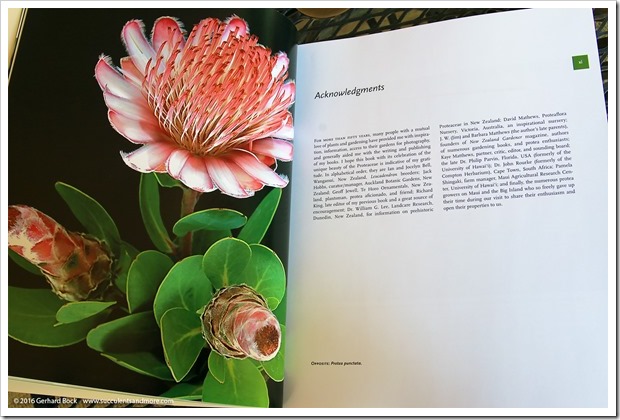 “Proteas in the Garden” gives recommendations for solving common landscape design problems, such as creating screening or shelter, and also lists when specific plants are in bloom so you can choose accordingly.

“The Bird Attractors” is only two pages, and the information given only applies to Australia, New Zealand and South Africa. The birds that act as native pollinators there don’t exist elsewhere.

“Proteas s a Cut-Flower Crop” is a fascinating look at commercial cultivation (and breeding) of proteas. I didn’t know that the University of Hawai'i operated at Protea Research Project at its Maui Agricultural Research Center. More than 200 Leucospermum cultivars have been created there, of which 102 have been made available to local growers. (The island of Maui is the epicenter of protea cultivation in the U.S. I remember seeing extensive fields in the Upcountry during our 2013 visit.) 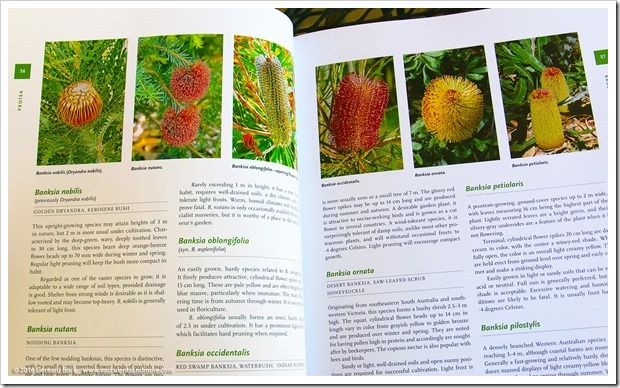 Taking up 168 of the book’s 232 pages, the “Identification” section is what makes this book so outstanding. In clear and precise language, Matthews describes hundreds of species and cultivars in 23 different genera from Adenanthos to Toronia. The kind of information given varies by entry but often includes advice on planting and pruning as well as a general indication of cold-hardiness. 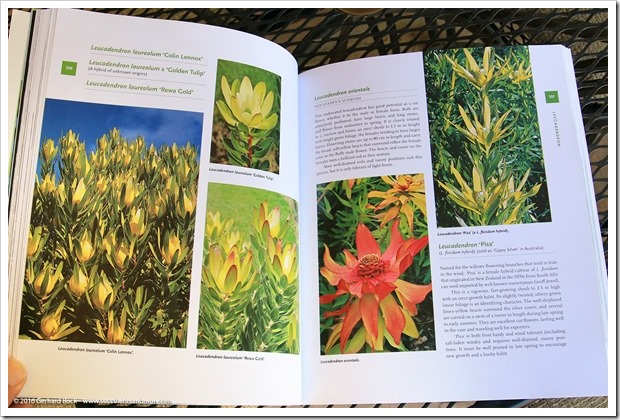 The photographs, rather than being utilitarian, are true standouts. Many of them are so beautiful, I would hang them on my wall. In the preface, Matthews gives credit to the evolution of digital cameras:

I now feel my photography skills have improved substantially, helped especially by the giant strides made in digital cameras. I have reveled in the freedom that quality digital cameras and modern lenses have given me. […] I can take dozens of images, playing with backgrounds, aperture, lighting, and so on […].

This is an appropriate time to produce a book that in itself can be a photographic tribute to the beauty of the Proteaceae and their unique form. There can be few other plants that lend themselves so well to creating wonderful photographic imagery. 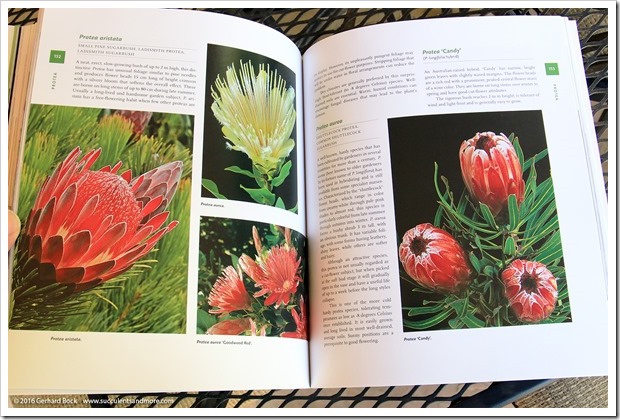 In addition to the best known genera (Banksia, Grevillea, Leucadendron, Leucospermum, Protea), the book also profiles lesser known genera like Hakea, Isopogon, Mimetes, and Warata. It even includes quite a few I had never heard of before, such as Alloxylon, Buckinghamia, Gevuina, Paranomus, Persoonia, etc. 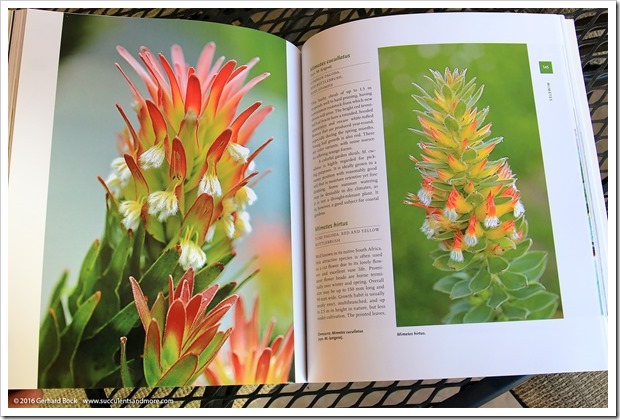 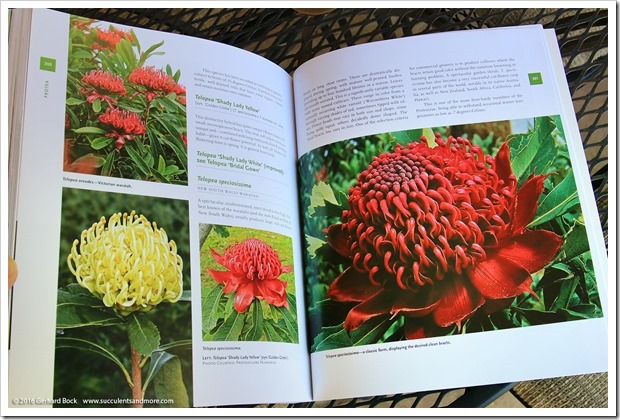 Of the genera that were completely new to me, the most spectacular is Serruria. Look at the photo of Serruria florida below. Who wouldn’t want that growing in their garden? Unfortunately, this genus of 44 species from South Africa has a very specific soil requirements (nutrient-poor and especially low in phosphate) and tolerates no frost. 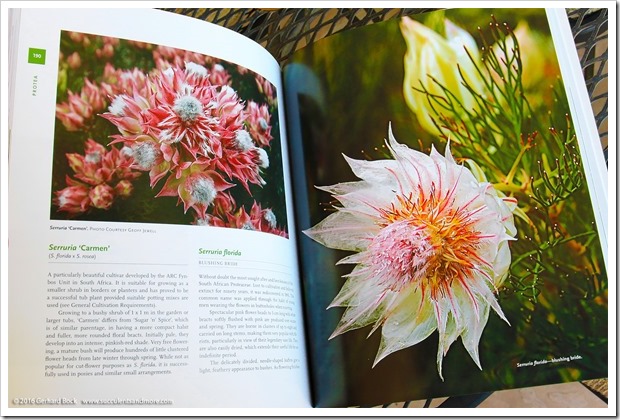 Several appendices list sources, botanical gardens, clubs and associations dedicated to proteas; a glossary with fairly general botanical terms as they pertain to proteas; and a list of references and recommended reading.

By design, Protea: A Guide to Cultivated Species and Varieties is limited to the species and cultivars the author considers to be most garden-worthy. Personally, I would have liked to see even more selections included, but I do understand that at some point either the author or the publisher said, “enough is enough.” Maybe at some point in the future Lewis Matthews will be given the freedom to write a truly comprehensive protea reference. One can dream…

As it is, this book is for you if you have more than just a superficial interest in proteas and want a compact source of reference and inspiration. Priced at $45, it is not cheap, but there is nothing else like it available. Highly recommended.

Lewis Matthews has spent a lifetime growing, photographing and writing about proteas. For 45 years, he and his wife ran a protea nursery in New Zealand; now they live in Queensland, Australia. Matthews has written four other books about proteas: South African Proteaceae in New Zealand (1983), Proteas of the World (1993), The Protea Growers Handbook (1993), and The Protea Book(2002). His photographs can be seen at www.matthewsbotanicalimages.com.