The last garden my partner-in-crime Kathy Stoner and I visited during the Garden Conservancy’s Spring 2016 East Bay Open Day was the Bowyers’ Japanese garden in the hills of Orinda. After the artistic exuberance of Keeyla Meadows’s and Marcia Donahue’s gardens, this garden was like a palate-cleansing sorbet after a rich meal. 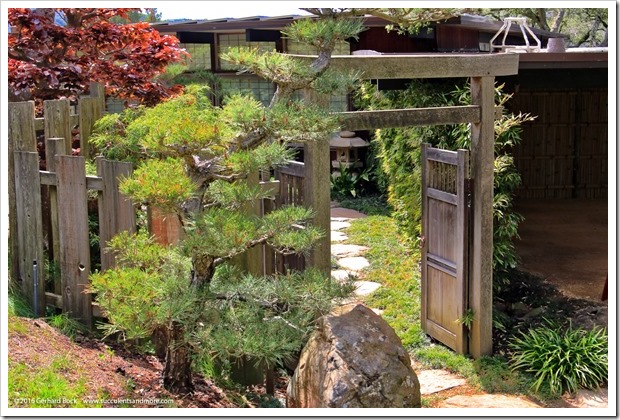 I love riots of colors and textures as well as thoughtfully placed art objects that express the owner’s personal taste. However, after a while, the constant onslaught of visual stimulation becomes too much and I begin to long for the soothing tranquility of a space like the Bowyers’ garden.

Developed over a period of 40 years, this meticulously maintained garden looked so authentic to me that I felt transported from California to Japan. From the handout we received, I do know that renowned Japanese garden designer Henry Matsutani, who created the Japanese Tea Garden in San Francisco’s Golden Gate Park, was involved in the creation of the waterfall you see further below.

A large part of the one-acre property is a steep hillside. The house and the Japanese garden sit on the level part on top and occupy a relatively compact footprint. The concrete driveway and carport pad were removed in 1990 to create a “rural-like entrance lane.” Indeed, the entrance to the garden, surrounded by a simple wood fence, does recall rural Japan. 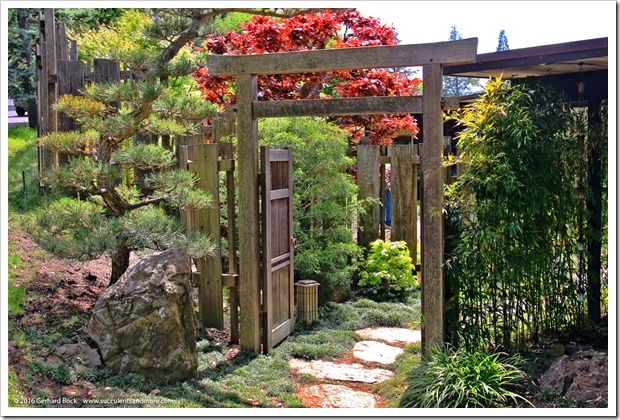 A living wall of bamboo separates the carport (right) from the garden (left). Look how perfectly trimmed the bamboo is! 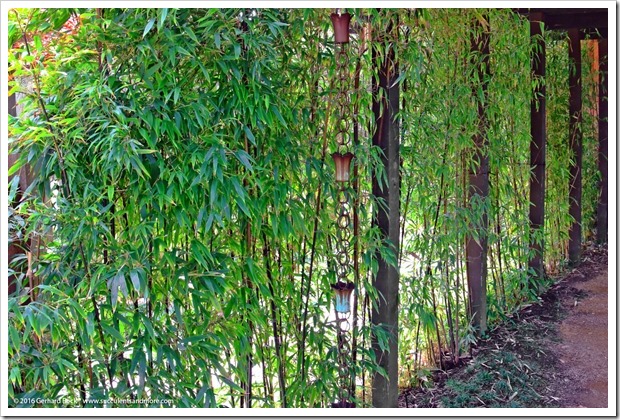 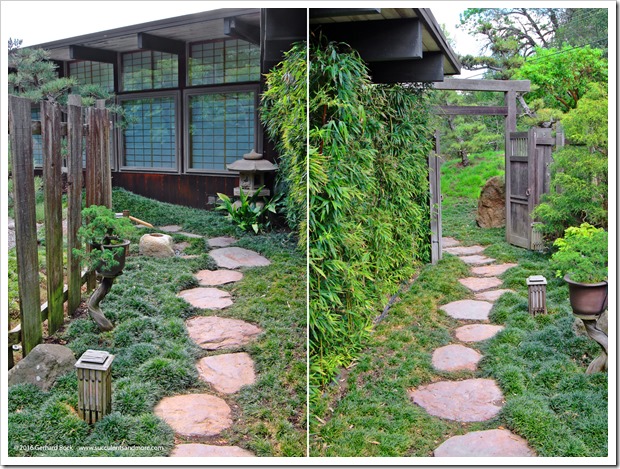 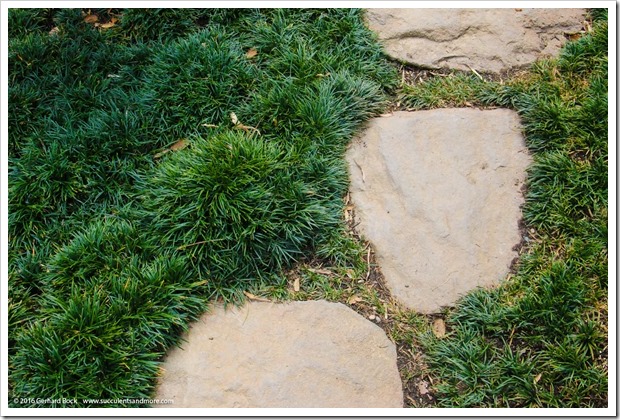 More vignettes from the entrance garden: 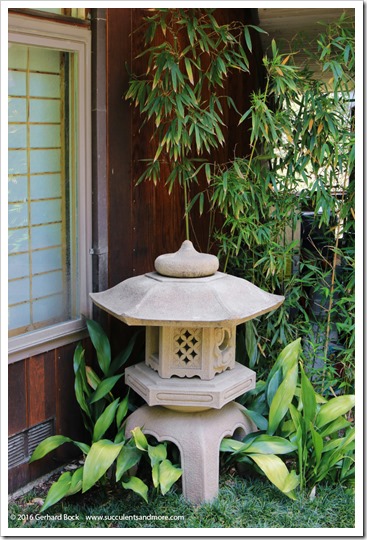 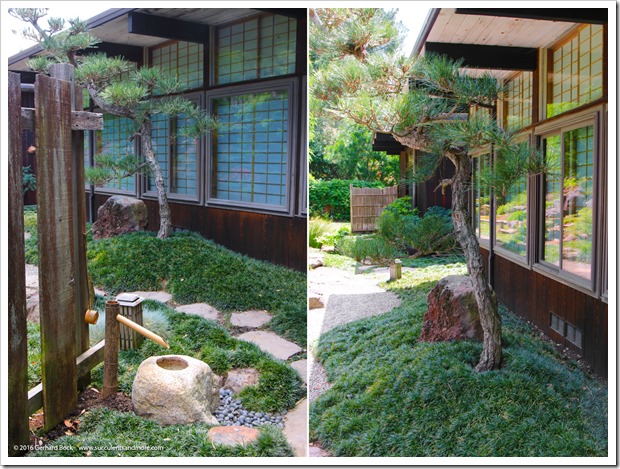 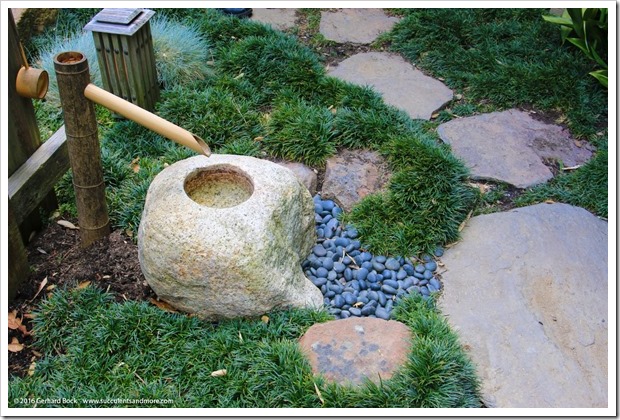 In the main part of the garden, a meandering path of stepping stones leads through a carefully raked gravel area. 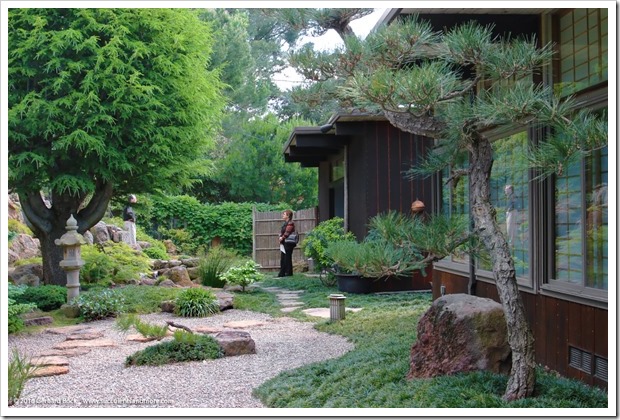 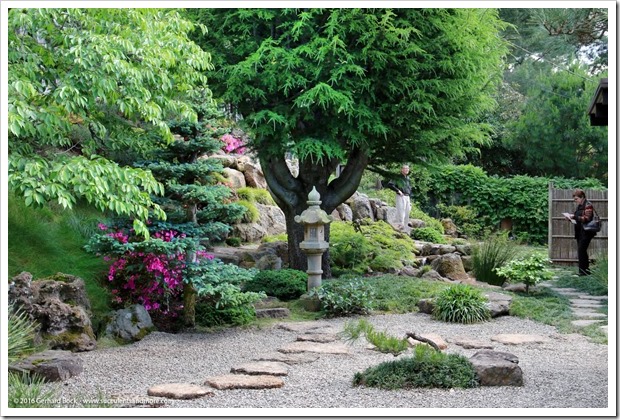 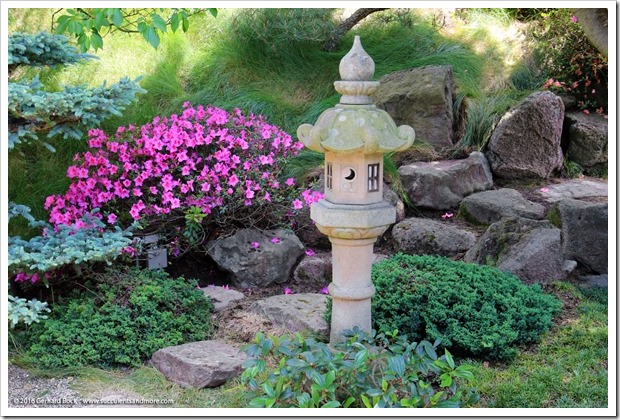 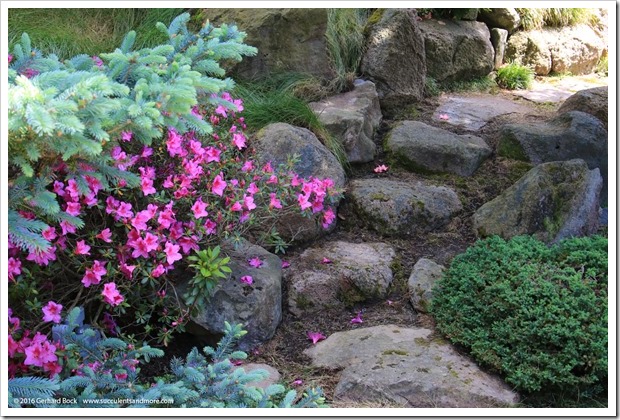 This azalea bush provided a perfectly placed burst of color in what is otherwise a muted sea of greens and browns. 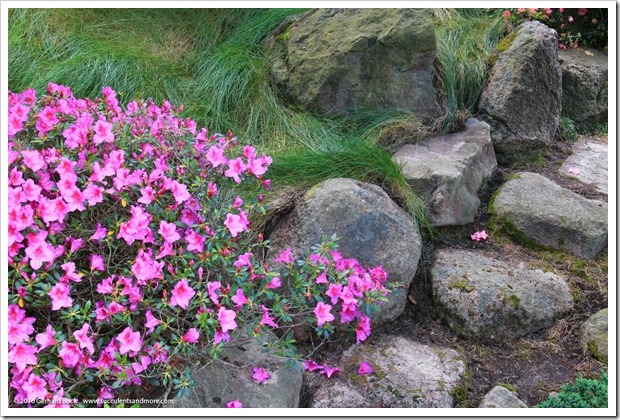 Another pop came from this spectacular purple beech, pruned into an oversized bonsai: 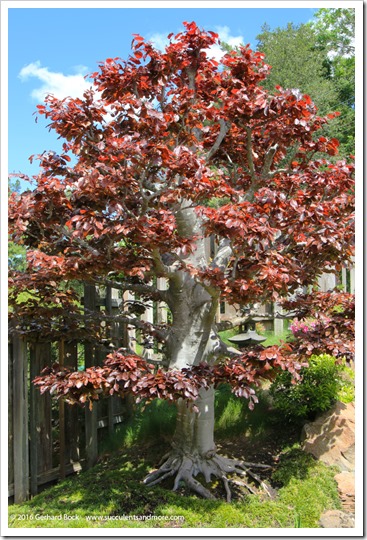 A small stream cascades down the roadside hill to a small pond: 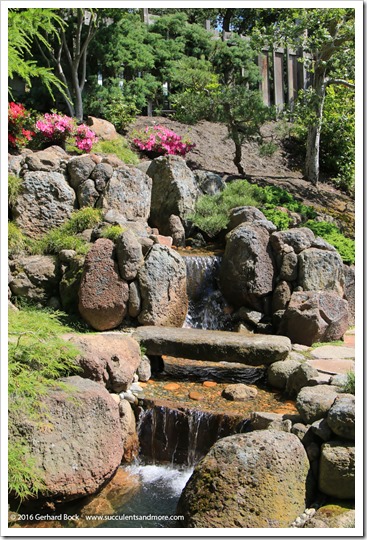 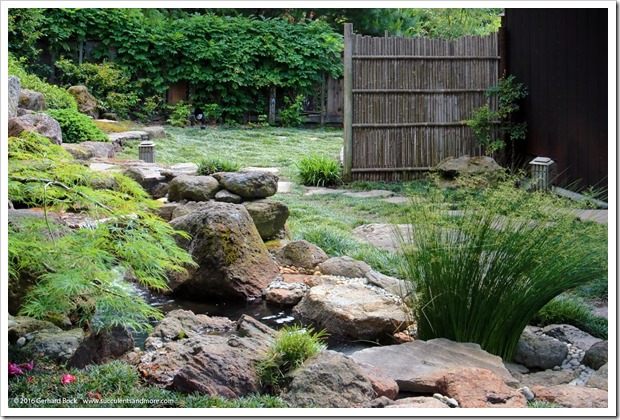 Now let’s walk up to the front door: 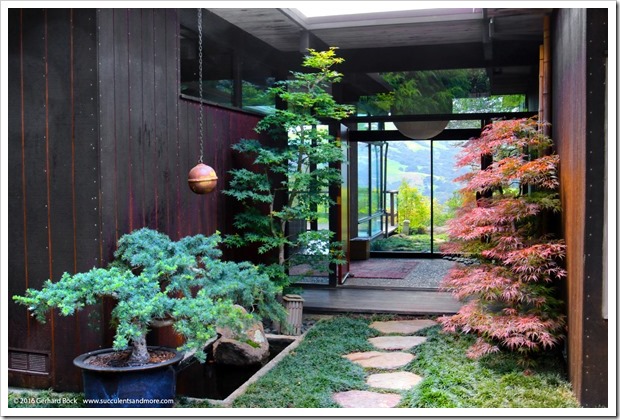 The floor-to-ceiling expanses of glass offer jaw-dropping views. The house seems to float above the valley below. 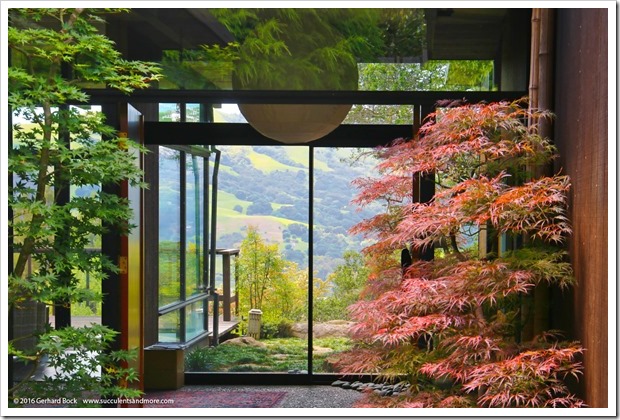 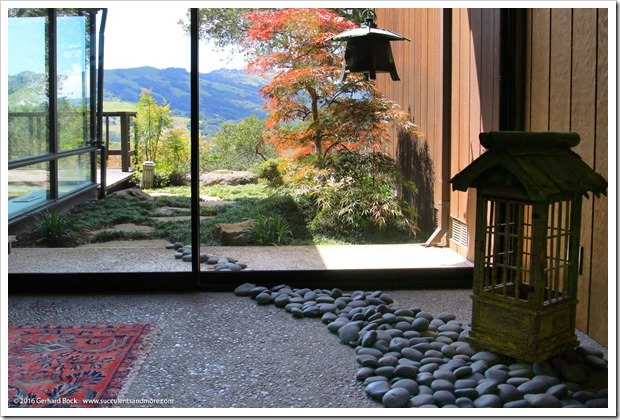 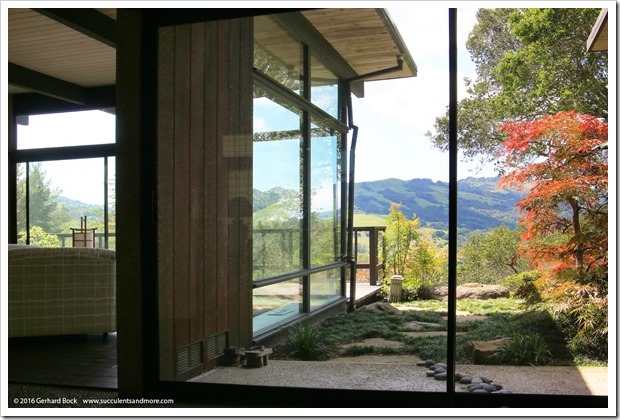 The next set of photos was taken on a wooden deck on the other side of the house, i.e. looking at the house instead of toward the hills. 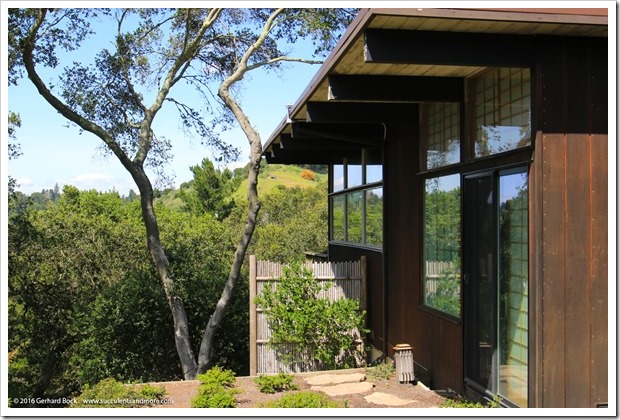 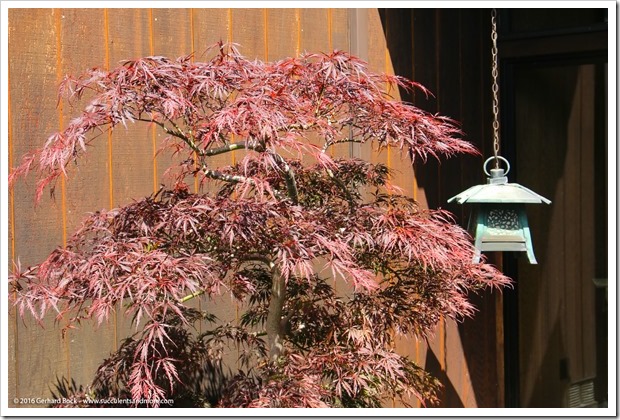 Looking through the glass slider and the front door toward the Japanese garden on the other side of the house: 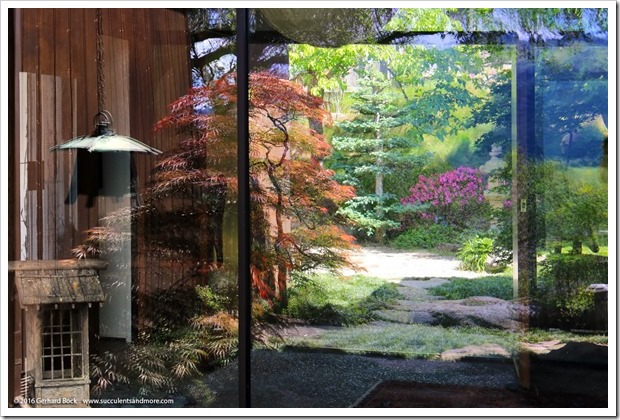 And looking through the trees toward the hills: 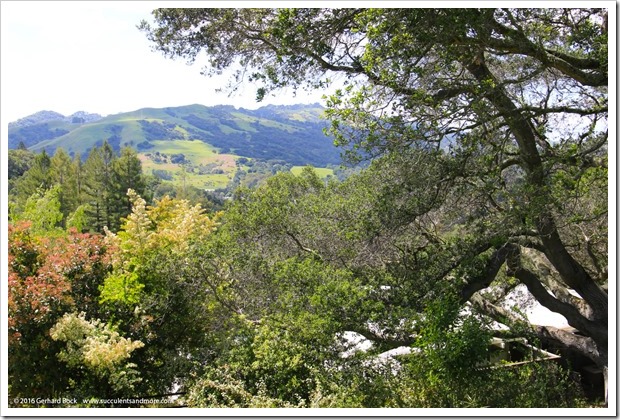 Wherever I went, I found interesting vignettes: 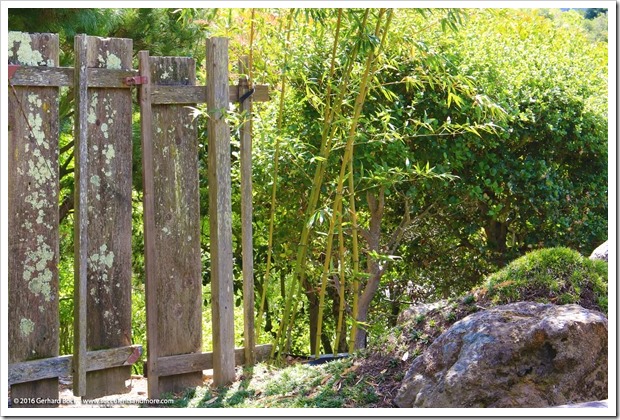 The final two photos were taken from the road looking down at the house. The Bowyers call this deck the “Moon Watching Stage.” What a great place to relax and enjoy the endless views! 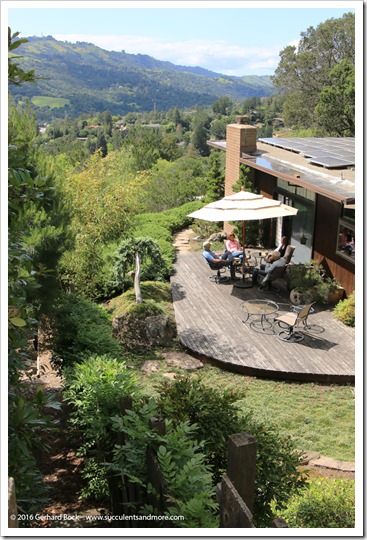 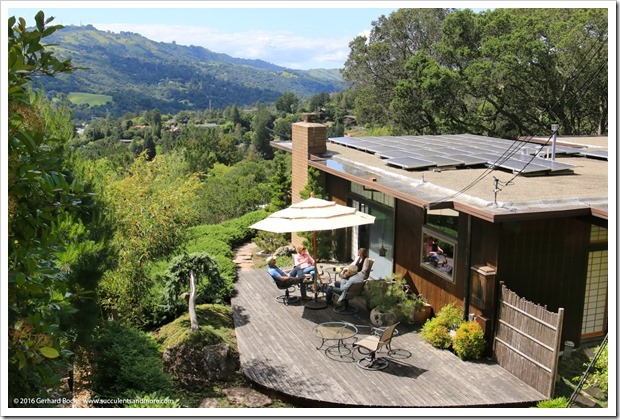 This garden, more than most, exemplifies the principle of borrowed scenery. The beautiful backdrop against which this property is set—the valley below, the hills in the distance—becomes a visual extension of the garden, elevating it to a whole new level.