This summer has been busier than usual because of that pesky thing called work—you know, the time-consuming activity that gets in the way of fun but pays the bills. While I’ve had less time for gardening (hence fewer posts), summer tends to be a lazy season in the garden anyway. It’s a time to sit back and enjoy the fruits of your earlier work. In my garden that includes admiring the flowers of cacti and other succulents.

The first one is a popular Brazilian cactus, Parodia magnifica. Mine is still solitary, probably because it’s confined to a pot, but in the ground it forms a rather extensive colony over time. The flowers are a pale yellow, with translucent petals resembling chiffon. The second one is a barrel cactus I bought on our February 2011 trip to Southern California from Mariscal Cactus & Succulents in Desert Hot Springs. It was sold to me as a fish hook cactus (Ferocactus wislizeni) but when Greg Starr stayed with us last spring, he questioned that ID and suggested it was Ferocactus herrerae, a closely related species from the coastal plains of Sonora and Sinaloa, Mexico.

After we replaced our front lawn with two succulent mounds earlier this year, I finally put this poor thing in the ground. In less than five months, it not only started to twist at the top (the most prominent feature of Ferocactus herrerae), it also started to flower. The flowers confirm that it’s definitely Ferocactus herrerae. 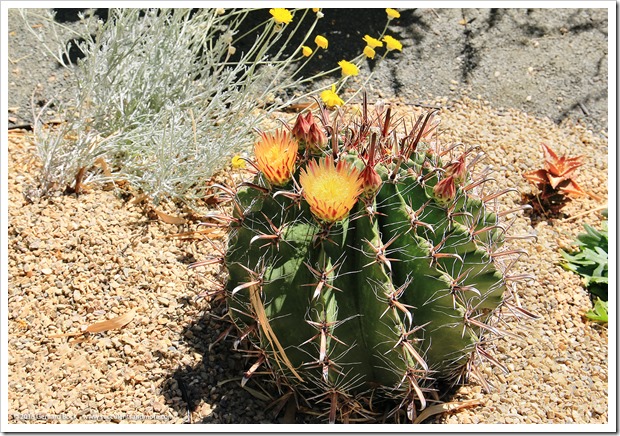 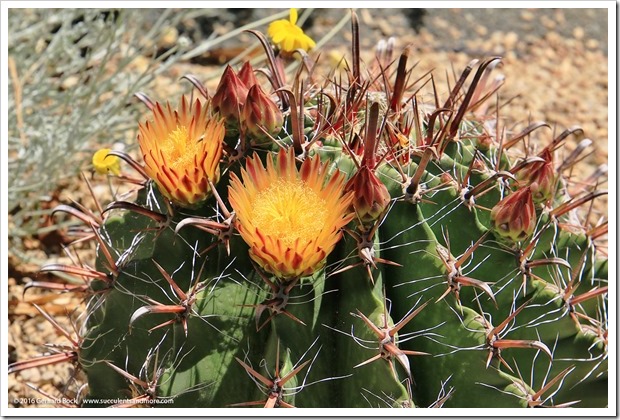 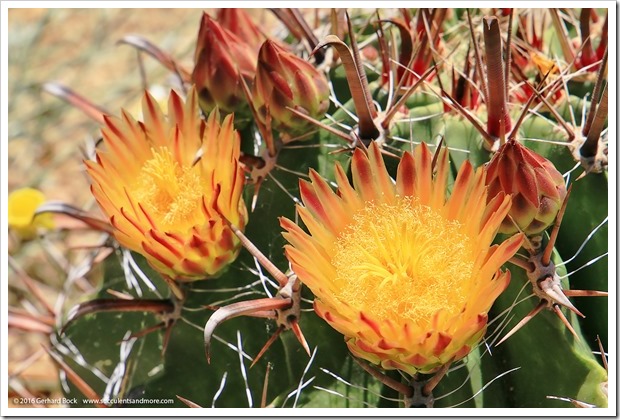 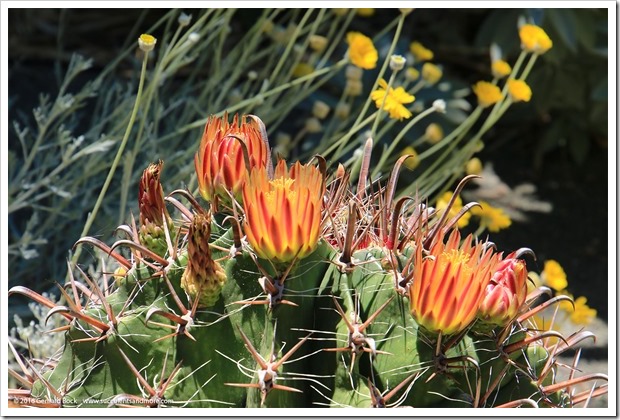 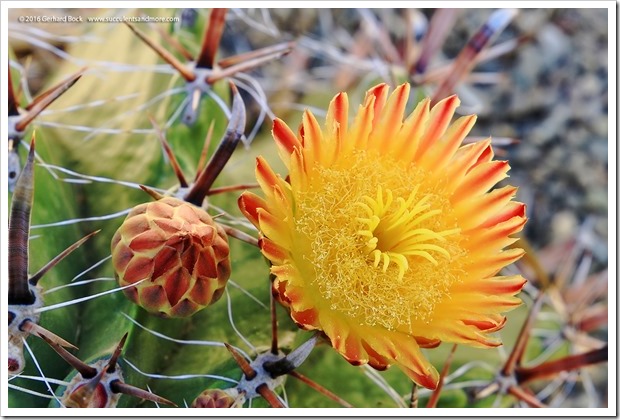 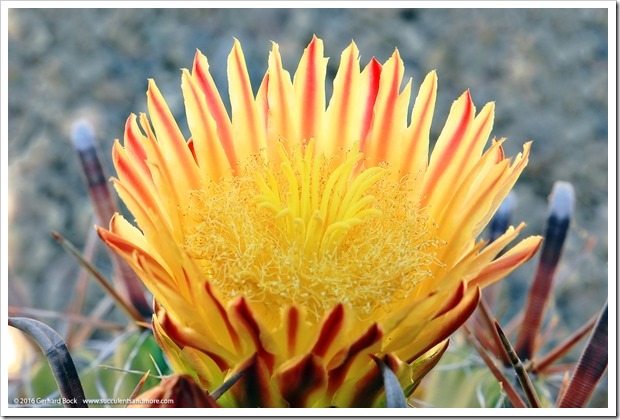 At the May 2016 Show and Sale of the Sacramento Cactus and Succulent Society, I bought a 5-gallon size blue barrel cactus (Ferocactus glaucescens), which I planted in the smaller succulent mound in the front yard. It promptly flowered but for some reason I didn’t take photos. To my surprise, quite a few of the flowers were pollinated because fruit is now setting. The color is almost pure white—different from the red or yellow fruit on other barrel cactus. 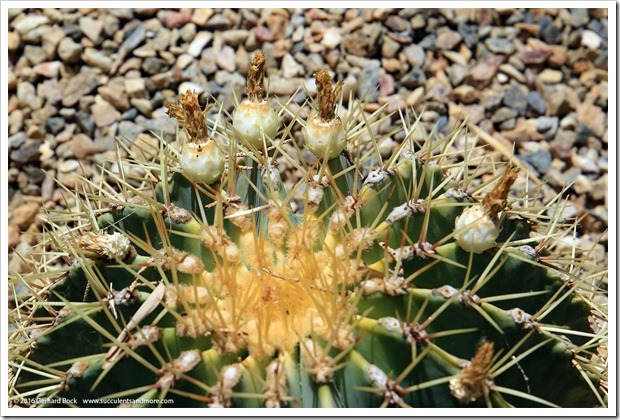 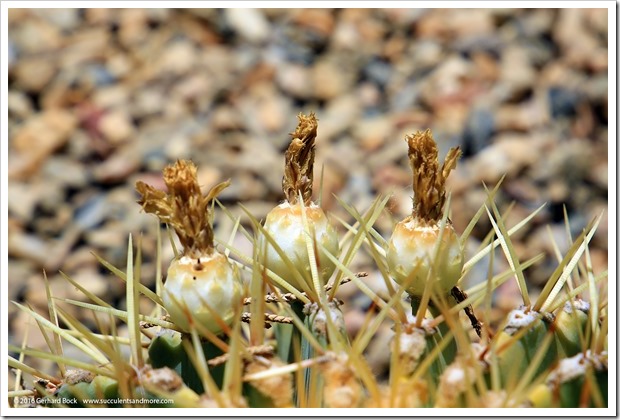 The third flowering succulent in my garden that I want to show you is not a cactus but a stapeliad from southern Africa. Its botanical name is Huernia zebrina, and its common name is particularly well chosen: life-saver plant. It does, indeed, look like a life saver or life preserver.

My first specimen died of a mealy bug infestation. I found this one at Lowe’s, of all places, in a one-gallon pot for $5.98. It’s now in a shallow bowl that sits in the full sun on top of the front yard fence. The coloration of the stems has gone from green to a mottled light purple, but the plant is clearly happy, as evidenced by the half dozen flowers it has produced in the last four weeks. 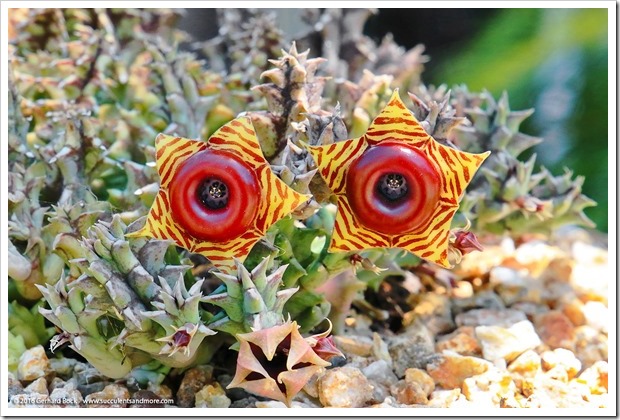 In the photo above, at the bottom, you can see a spent flower. New flowers look very similar; they unfold very much like an origami flower. 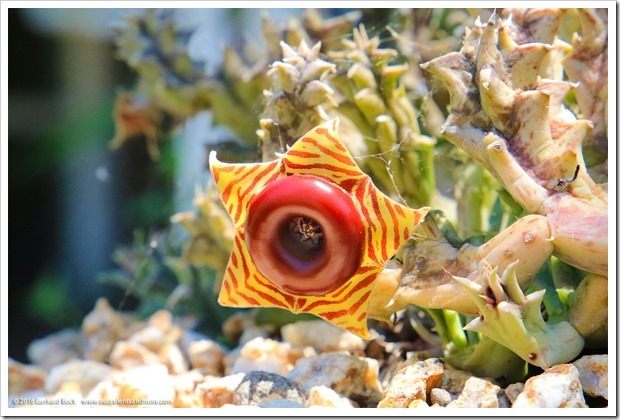 There’s something so strange and seductive about these flowers, I could look at them all day. A friend who was over thought the donut part was a piece of plastic that somehow got stuck to the flower. No, the ring not plastic. It’s an integral part of the flower, called an annullus. The faint but foul scent emanating from the center is irresistible to flies which are tricked into believing the plant is rotting meat. The flies lay their eggs, then flit to another Huernia zebrina flower, taking pollen with them. 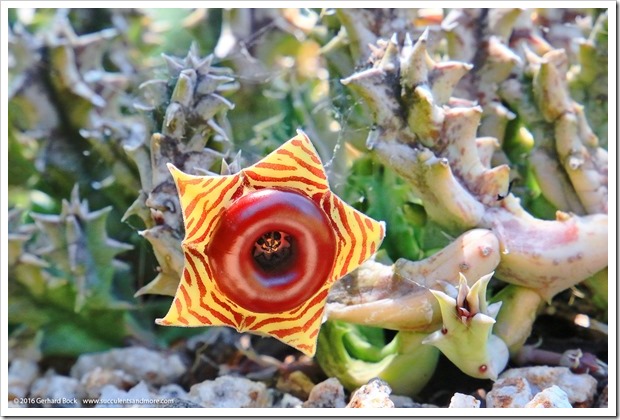 If you can keep the mealy bugs at bay (less of a problem in a sunny spot), Huernia zebria is very easy to grow in a nearly frost-free climate like ours. On a cold night (28°F or below), I throw frost cloth over it, otherwise I don’t worry. From spring through fall, I water Huernia zebrina once a week until water runs out from the bottom. In the winter, it gets whatever Mother Nature gives it.