Last summer we spent a couple of days in Victoria, the capital of the Canadian province of British Columbia. This included Canada Day, Canada’s equivalent of our Fourth of July. We saw many beautiful sights on our Pacific Northwest trip, but Victoria was the highlight for all of us. We swore we’d come back soon, but we had no idea that it would happen so quickly.

The driving force behind our quickie trip to Victoria last weekend was daughter #1. She’d fallen in love with Victoria on a high school trip three years ago, even before our visit last summer, and applied to the University of Victoria (UVic) this spring. After she was accepted, we thought it would be a good idea to do a campus tour before making a final decision on attendance. And that’s how daughter #1 (henceforth D1), my wife and I ended up in Victoria on Saturday morning.

To our delight, UVic was all D1 had expected, and more. I’ll have two separate posts about UVic since I took so many photos. The campus is beautiful at any time of year but especially so right now. Spring is at its peak and many trees and shrubs are flowering. I almost suffered sensory overload at the university’s Finnerty Gardens where thousands of rhododendrons in all colors were in full bloom.

Today’s posts contains photos I took on Saturday driving and walking all over town. Get ready for an explosion of tulips! 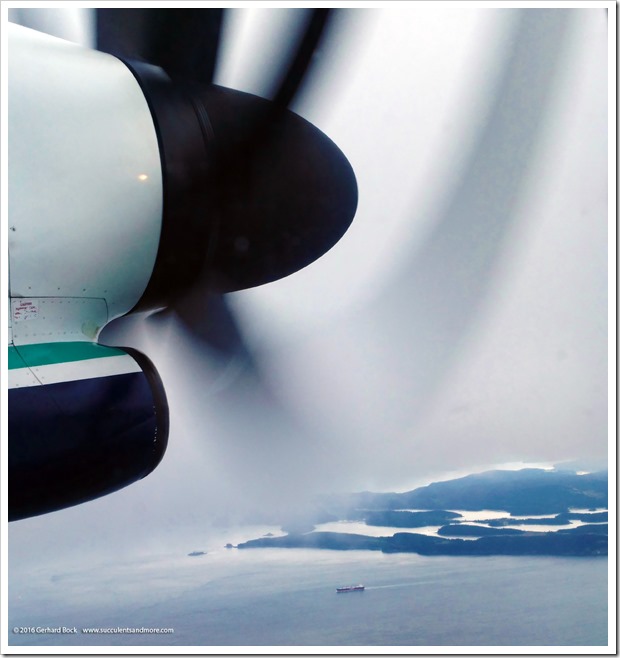 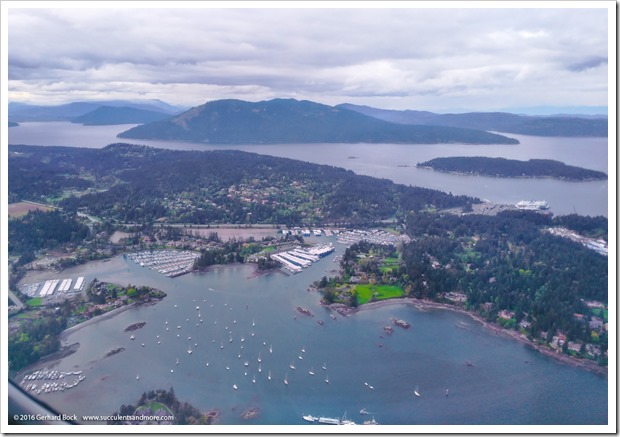 Another view from the plane just south of Victoria International Airport

I’m still not all that familiar with the geography of British Columbia so a map helps illustrate just where Victoria is. As you can see, it’s very close to Washington State and hence the U.S. In fact, as the crow flies Victoria is only 22 miles from Port Angeles, Washington across the Strait of Juan de Fuca; 75 miles from Seattle, Washington; and 60 miles from Vancouver, the largest city in British Columbia. The flight from Seattle takes just 25 minutes (air time). 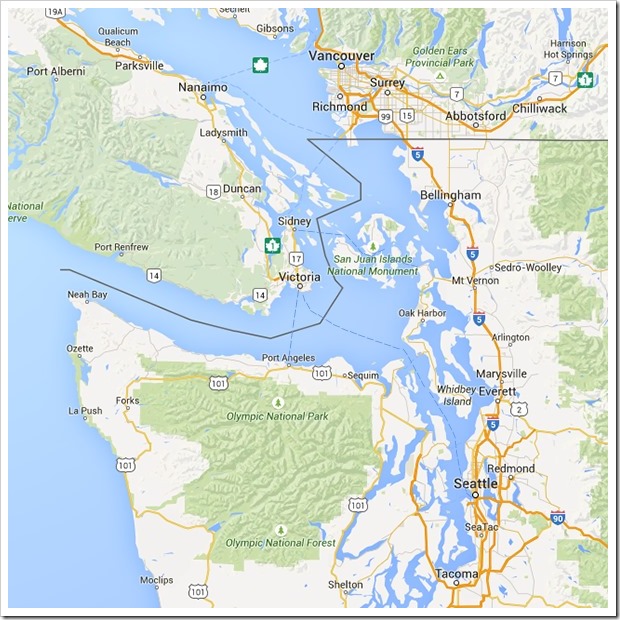 Victoria is located on the southern tip of Vancouver Island, with a length of 290 miles, a width of 50 miles and 2,100 miles of shoreline the largest island in the Pacific Ocean east of New Zealand. Confusingly, the city of Vancouver itself is on the mainland, not on Vancouver Island. 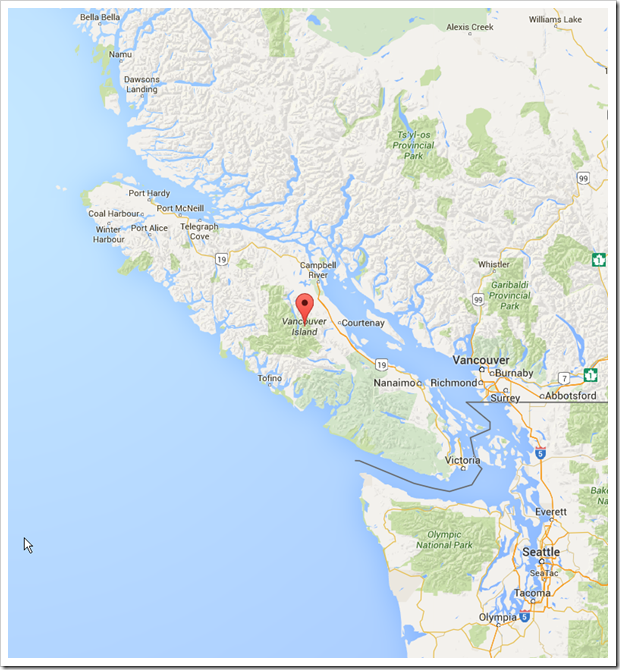 Established in 1843, Victoria is one of oldest cities in the Pacific Northwest and one of its top tourist destinations. It has a Mediterranean climate with mild, rainy winters (average high of 46°F) and cool, dry summers (average high of 68°F). Since Victoria is in the rain shadow of the Olympic Mountains across the Strait of Juan de Fuca, it gets relatively little rain compared to other places on Vancouver Island. The average precipitation for the Victoria is only 28 inches vs. 57 inches for Vancouver and a staggering 128 inches for Tofino on the west coast of Vancouver Island. Still, that is enough rainfall to support gardens lusher than anything you'll ever see in California. And because of the mild winters, plants thrive in Victoria that would struggle in Portland and Seattle.

I won’t go into much more detail here, but if you’re interested in the history of Victoria, there is a lot of information online. This Wikipedia article is a good start.

Let’s start our tour near the University of Victoria. After we were done with our campus tour we drove down to Cadboro Bay, the closest beach. By car it’s only a few minutes; on foot a 10-minute walk. The parking area at Cadboro-Gyro Park was full so we didn’t linger, but this is the view down Sinclair Road towards the water. Not shabby at all. 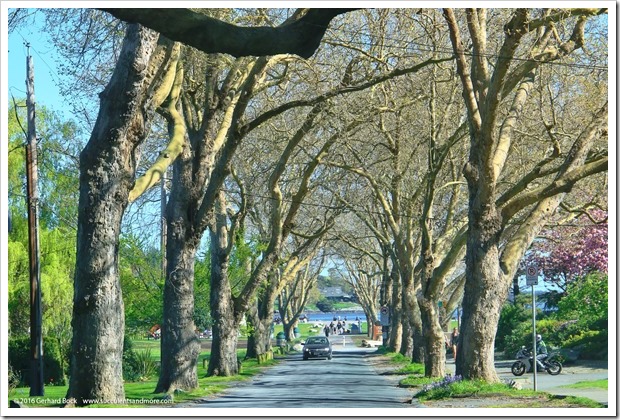 As is the case in any seaside community, the closer you get to the water, the fancier the houses are. Victoria is no different. While the houses are nice eye candy, I’m much more interested in the landscaping. This was one of my favorites (plus I was able to stop and take a photo): 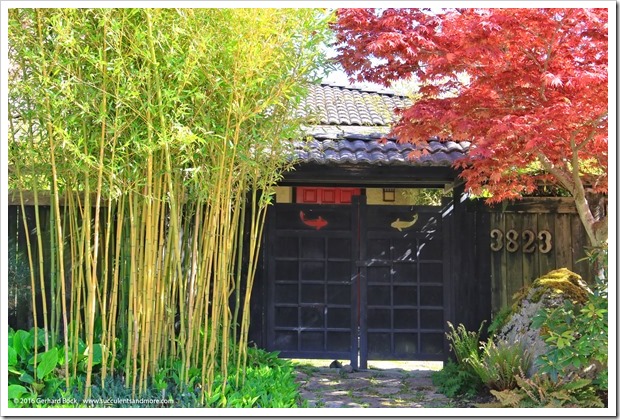 A little further on, as we were cruising along Beach Drive in the community of Oak Bay, I saw this sight: 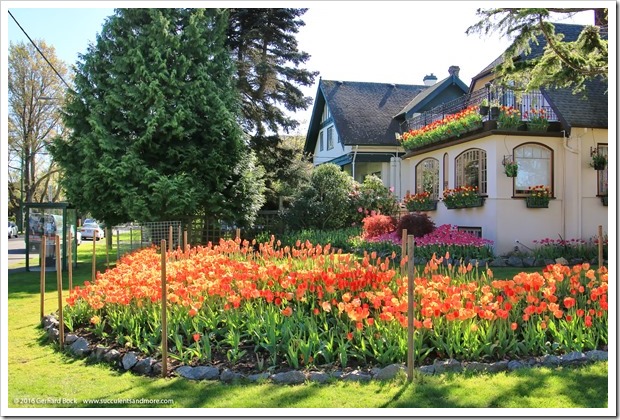 I immediately pulled over because I had to take a closer look. 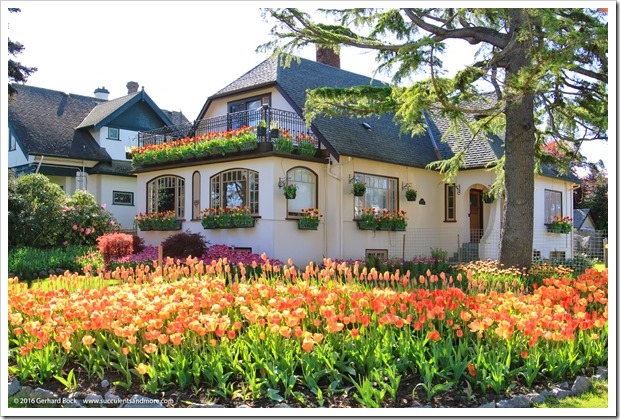 I have never seen so many tulips at a private residence. I would have loved to talk to the homeowner to find out more. How many tulips are there? Do the tulips stay in the ground? What do they plant after the tulips are done blooming? Etc. etc. 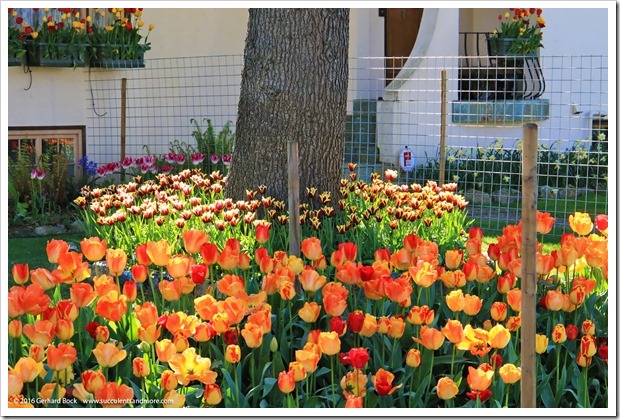 I’m usually not that wild about tulips but on a large scale the effect is mesmerizing. 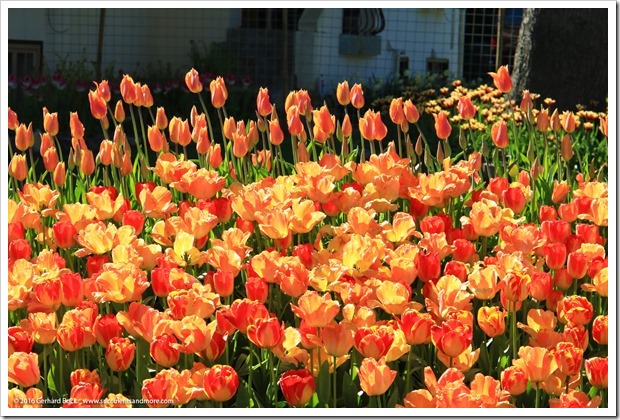 Everything was perfection, down to the window boxes. 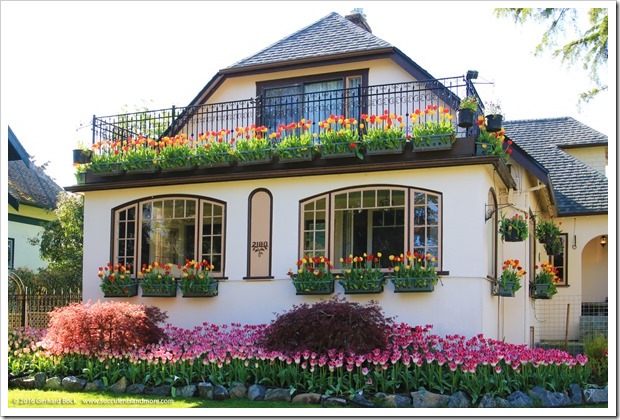 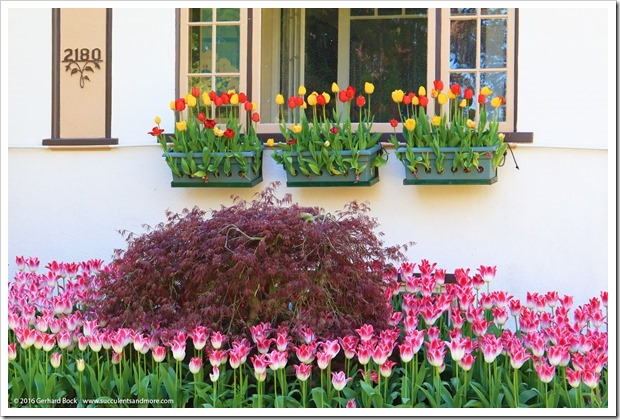 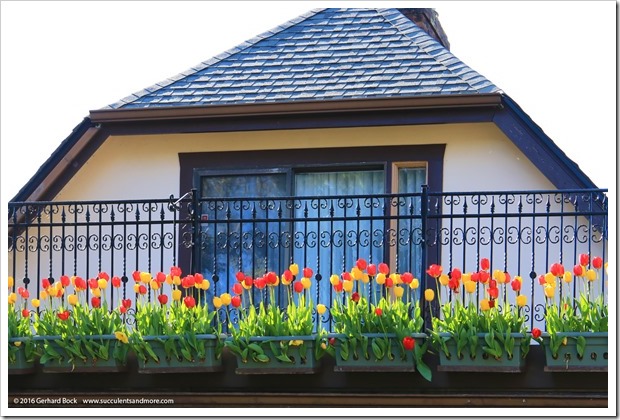 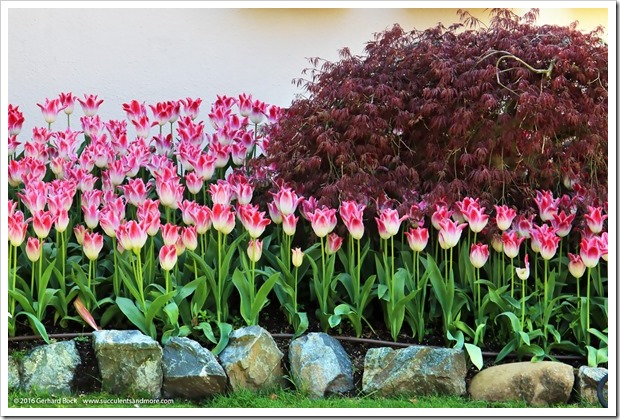 What an auspicious beginning to our weekend trip!

Beach Drive offers beautiful views of the Strait of Juan de Fuca, the body of water that separates Vancouver Island from the Olympic Peninsula in Washington State to the south. In the next photo, you can see the Olympic Mountains in the distance. At this point, Washington State is only 23 miles away although by ferry (Victoria to Port Angeles) it takes 1 hour 35 minutes to get there. 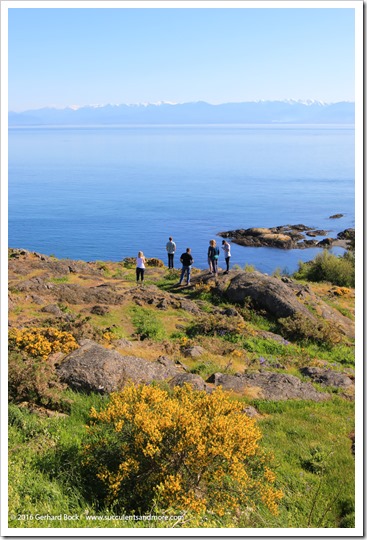 Scotch broom (Cytisus scoparius) is pretty and fragrant when in bloom but it’s a massive problem, choking out native vegetation. 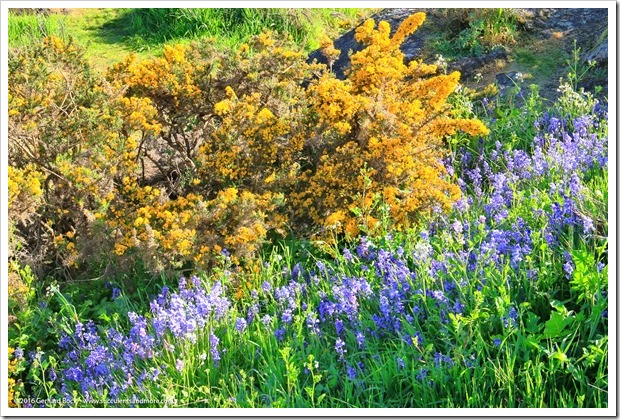 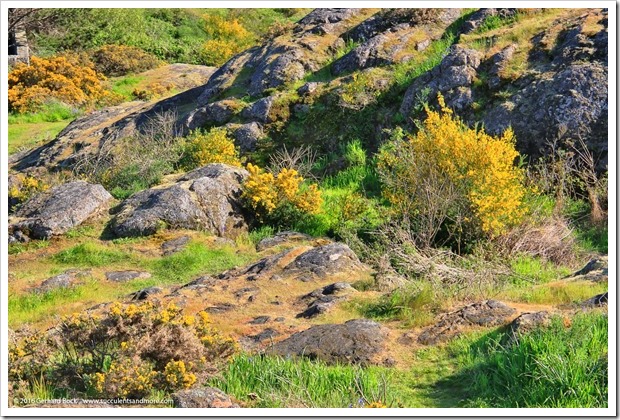 The houses you see along the waterfront range from traditional to ultramodern to quirky: 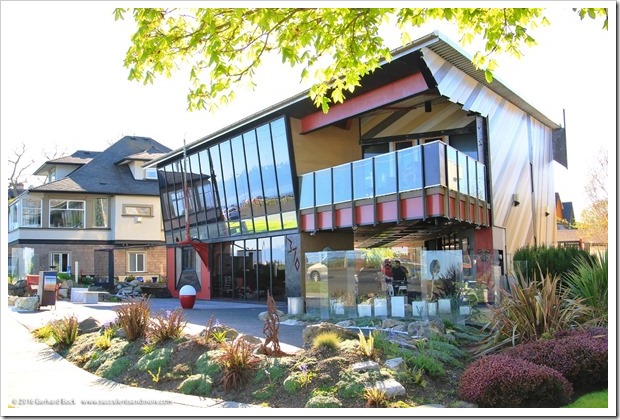 I’m not sure if I love it or not, but I couldn’t help but take a few pictures. 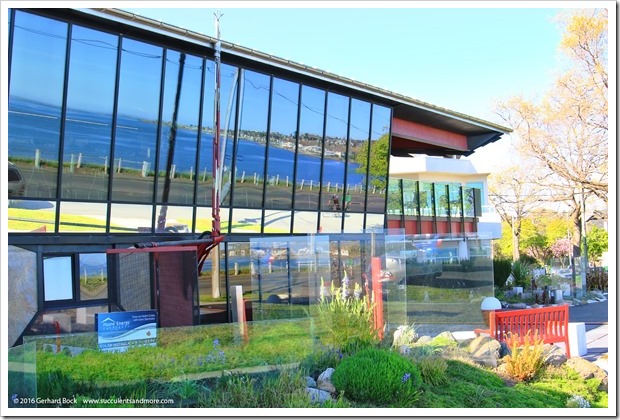 Next door we’re back to traditional, with low-key landscaping that is very appropriate for this wind-swept spot: 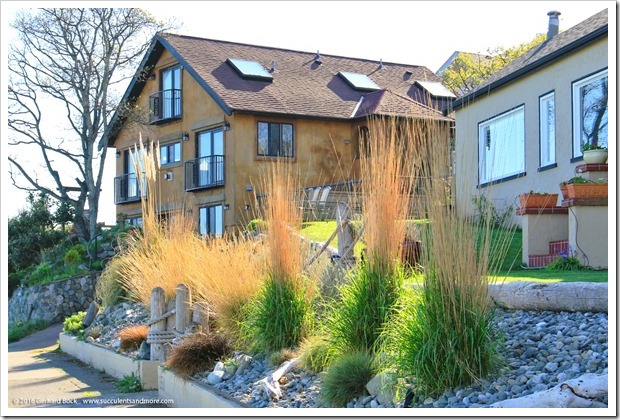 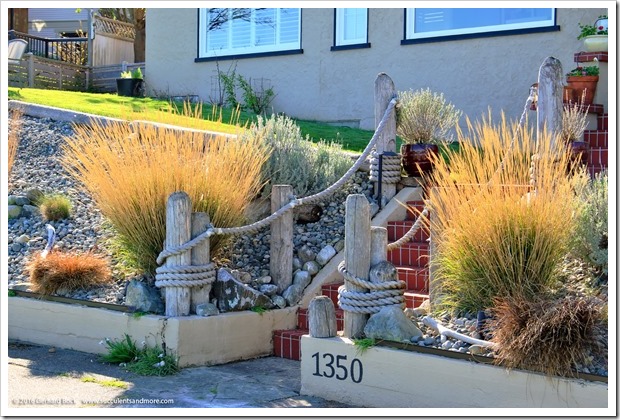 After checking into our hotel, taking a nap and eating dinner, we walked downtown along the Inner Harbour. Here I spotted yet another dogwood tree in full bloom. It turns out that the Pacific dogwood (Cornus nuttallii) is the official flower of British Columbia. 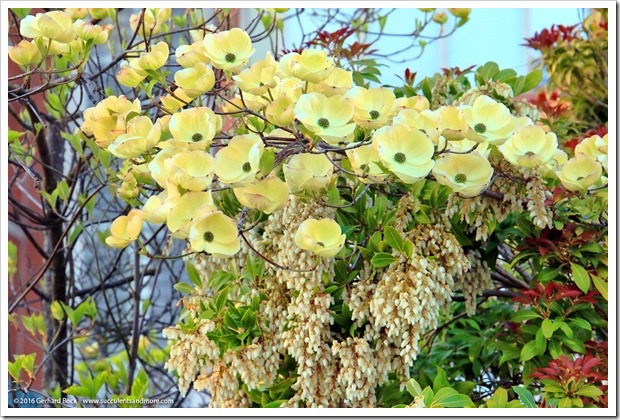 As hard as I tried, I didn’t spot very many succulents. Most of what I saw were small sempervivums. Here is one of the few larger succulents I saw, a yucca of some sort. The Japanese maple behind it, ablaze in the evening light, provides a striking backdrop. 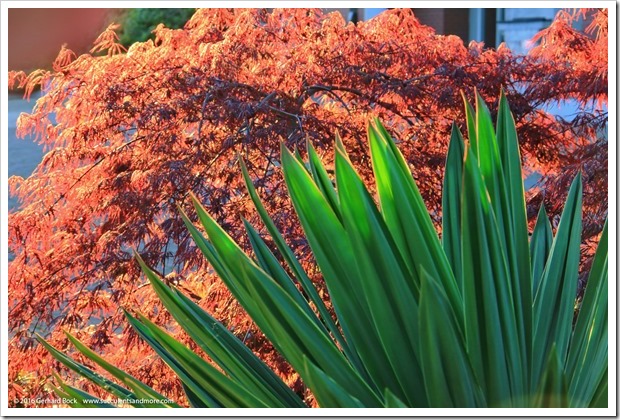 In the heart of the city, the landscaping is dominated by bulbs and annuals. If you can’t make peace with tulips, primulas, pansies and others of their ilk, you’re not going to like it here. 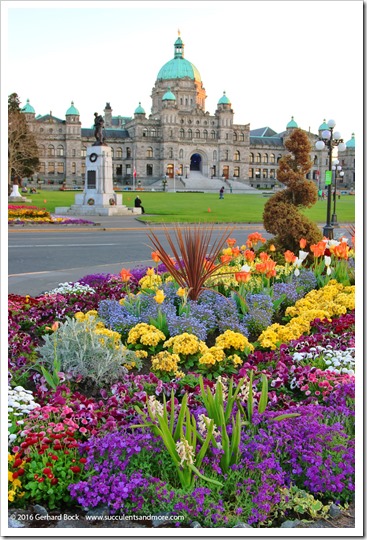 Well, that’s not quite true. You can always ignore the flowers and enjoy everything else. 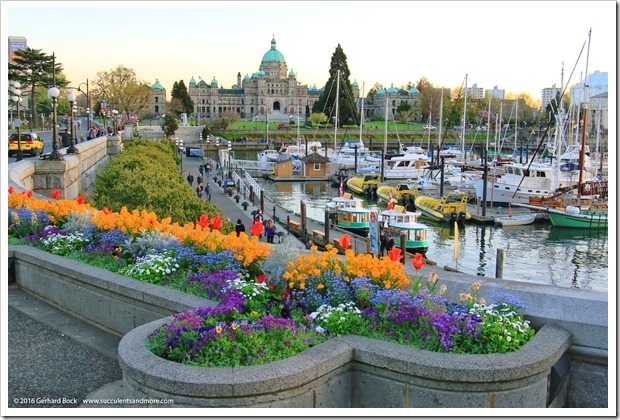 There sure is plenty to see… 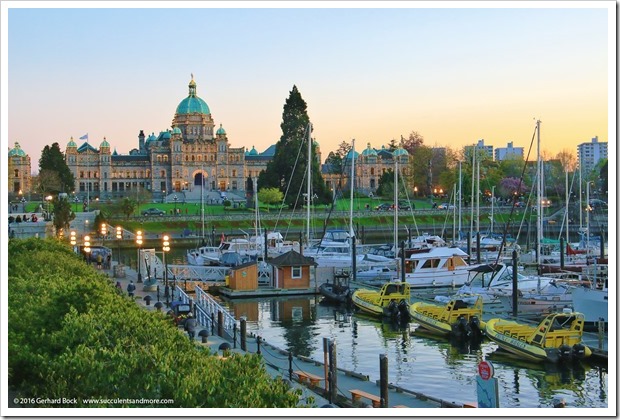 The Parliament Buildings are particularly beautiful when lit in the evening. 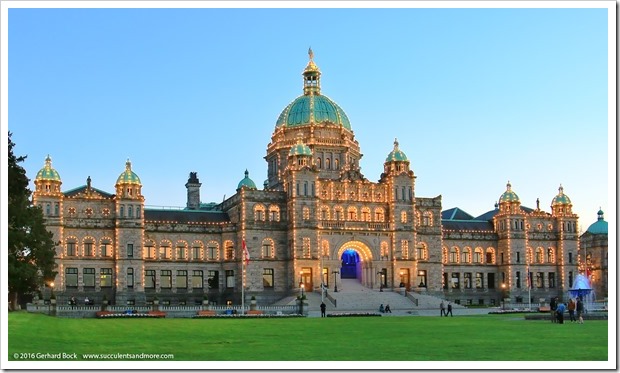 Check back tomorrow for part 2 of my Victoria, BC city tour.