Time to take a break from aloe spotting and our front yard lawn conversion and go back to Arizona. I still have quite a few things to show you from my December 2015 desert trip.

The interstate is great when you’re in a hurry, but otherwise I prefer country highways. There’s almost always a place to pull over when you see something worth photographing. Case in point: this hillside covered with saguaros near the town of Kearny, pop. 1950.

Twenty miles north of Kearny is the town of Superior, not much bigger than Kearny but a bit livelier owing to the fact that it’s an easy 1-hour drive from the Phoenix metro area. 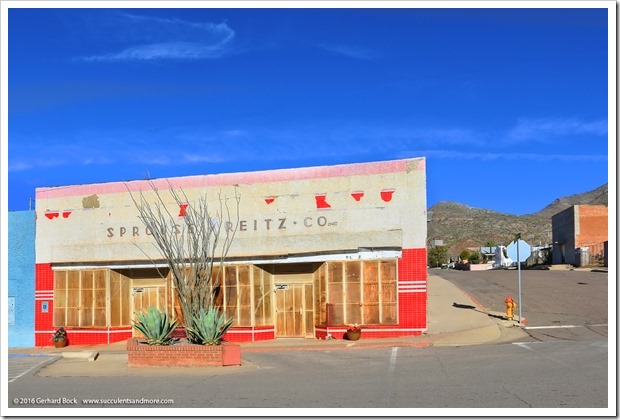 Abandoned Sprouse-Reitz store in downtown Superior, AZ. The chain went out of business in 1994, so this store has been empty for a long time. And yet the agaves and ocotillo are happy. I bet they don’t get much water at all.

The Boyce Thompson Arboretum (BTA) is located just west of town. Founded in 1925, it’s Arizona’s oldest botanical garden and at 323 acres also it’s largest. Click here to read more about the history of this fascinating place. 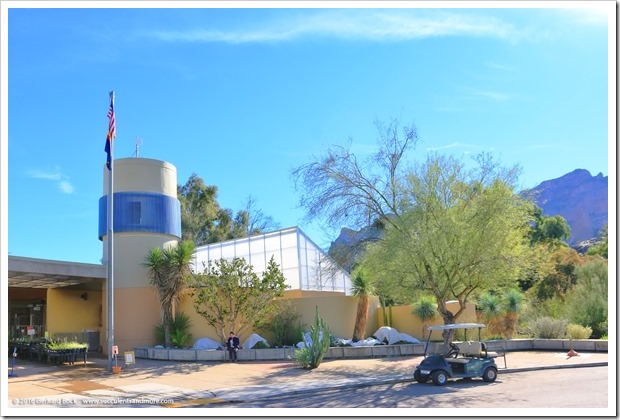 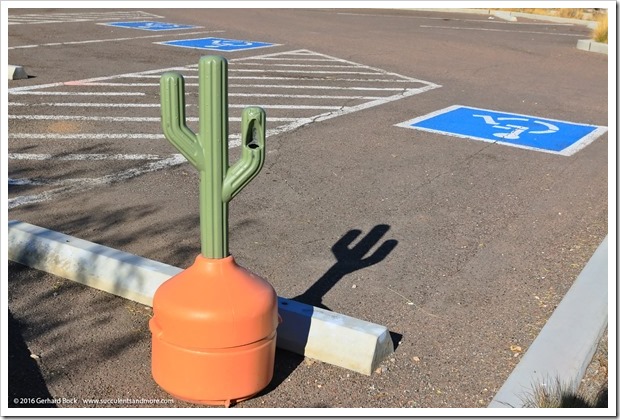 Arizona’s version of a traffic cone?

I had first visited the BTA in December 2013. In fact, it was the biggest surprise of my December 2013 Arizona trip, and I had been wanting to go back ever since. The location at the foot of impossibly scenic Picketpost Mountain is straight out of an old Western movie. And the plants are just as iconic.

Here is a handy map courtesy of (and copyrighted by) Arizona State Parks: 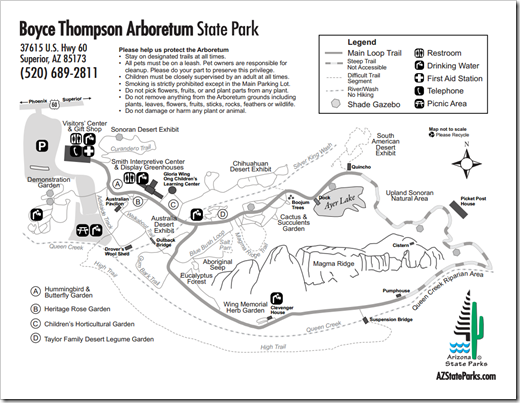 The gift shop at the entrance sells a nice variety of plants ranging from succulents to perennials, vines, shrubs and even trees. Unfortunately, many of the succulents were covered with frost cloth. 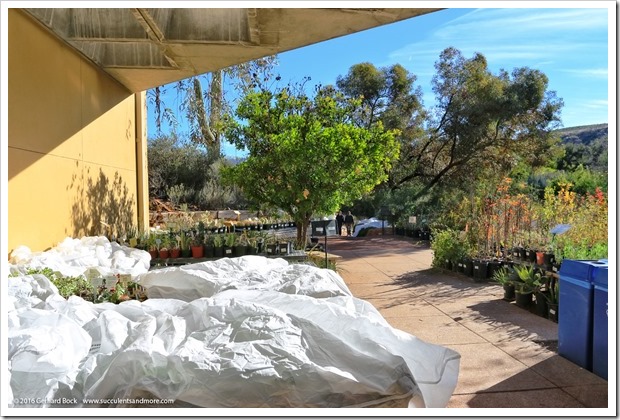 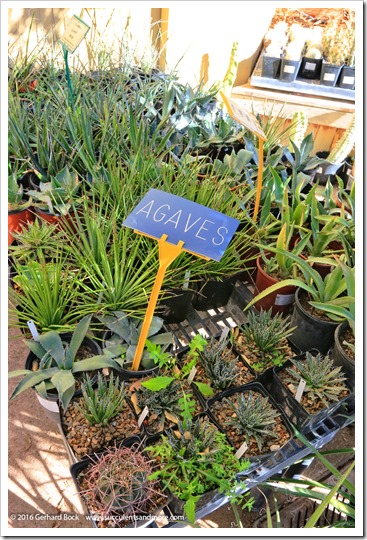 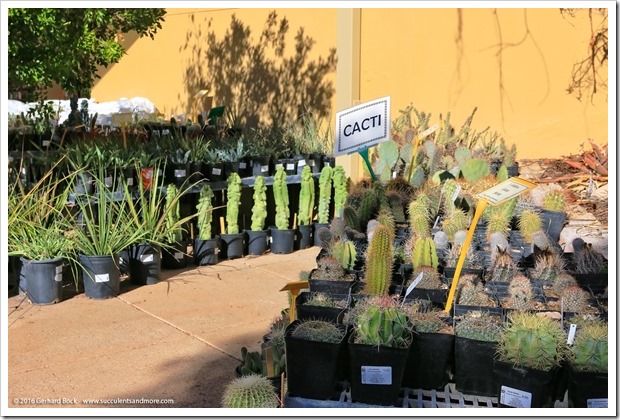 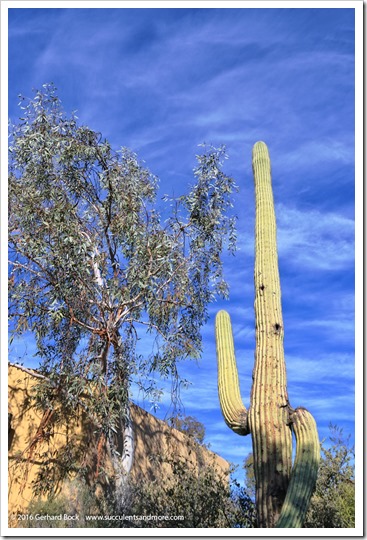 Saguaros are a very common sight, and yet I still stop and admire them

The South African beds at the start of the main loop trail, just behind the Visitor Center, were also covered with frost cloth. Temperatures had been in the high twenties in Tucson the two nights before, and I suspect conditions were similar in Superior. 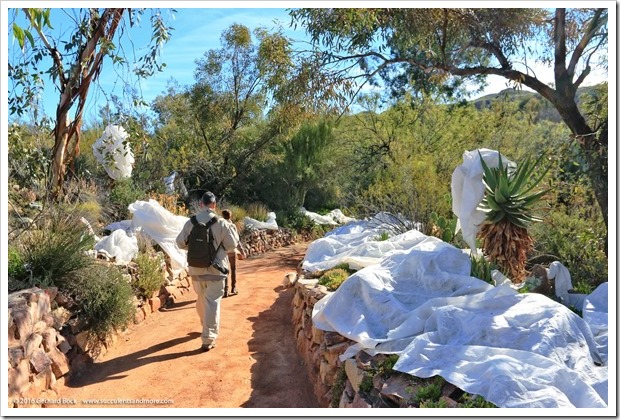 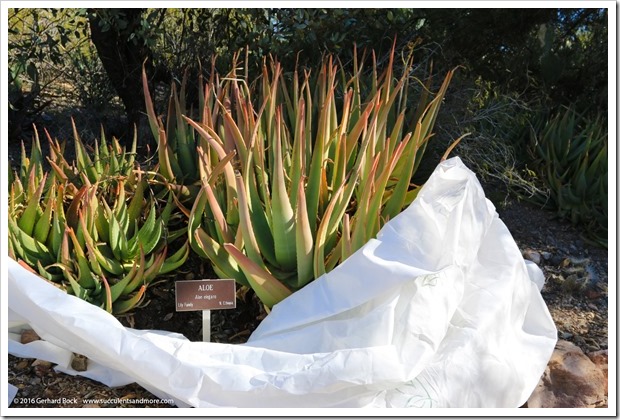 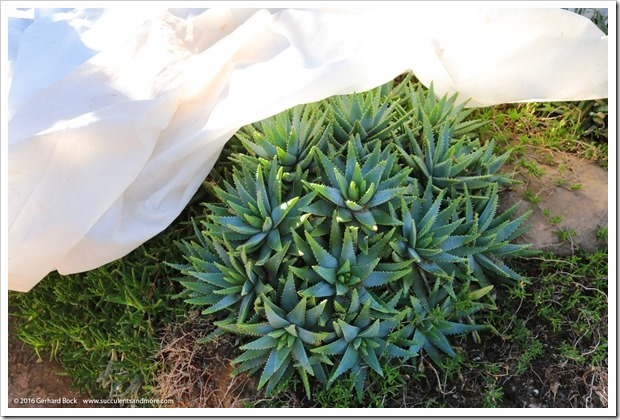 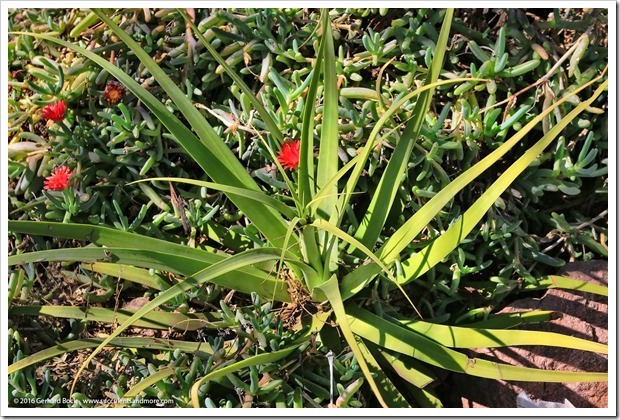 The first area I explored in more detail was the Desert Garden. It is part of the Demonstration Garden whose goal is to provide design and planting ideas for residential landscaping. If I lived in Arizona and my own garden looked anywhere close to this, I’d be one happy camper. 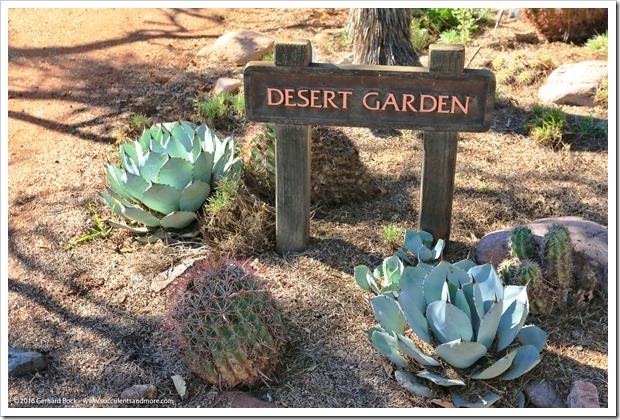 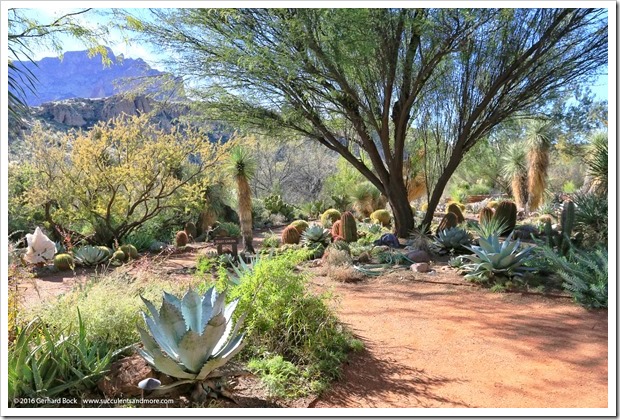 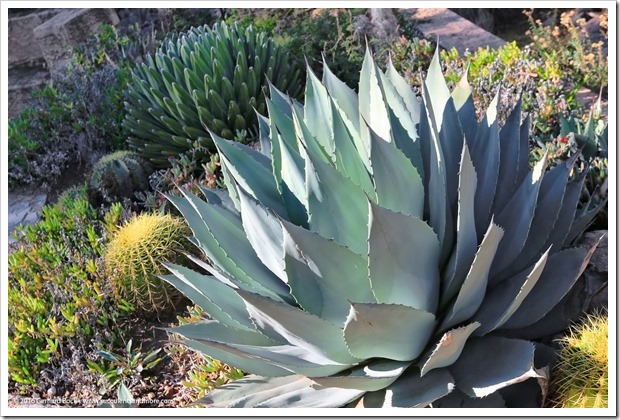 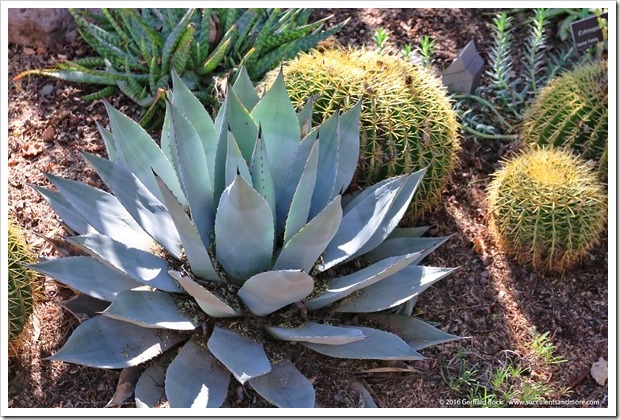 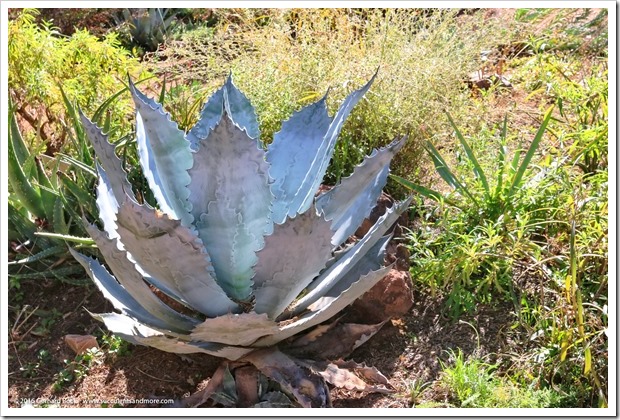 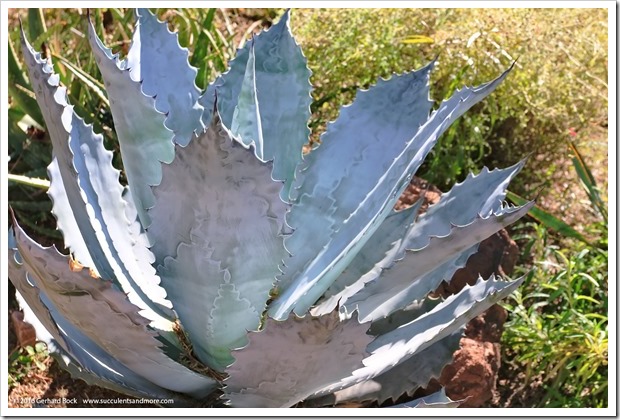 Agave colorata. one of the nicest specimen I’ve ever seen 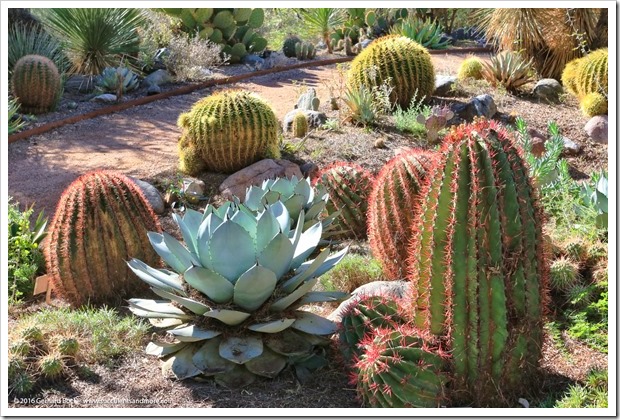 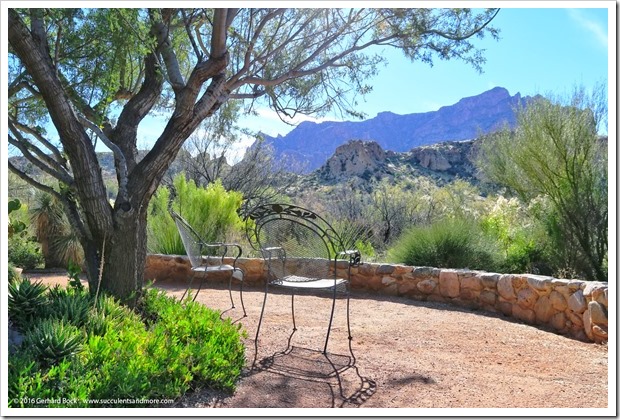 What I call the OMG view 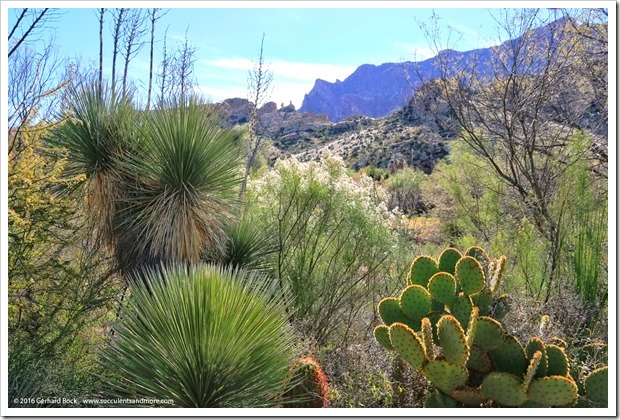 The desert equivalent of “borrowed scenery” 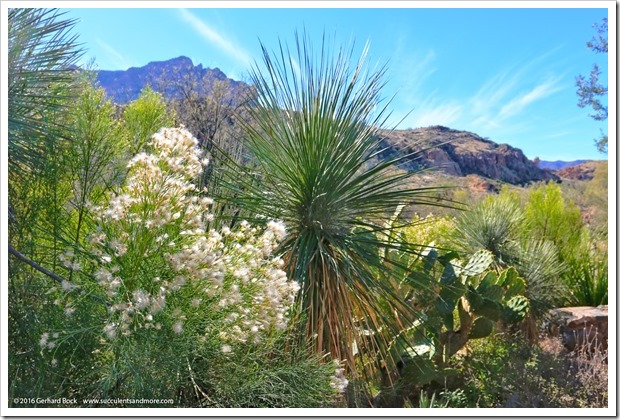 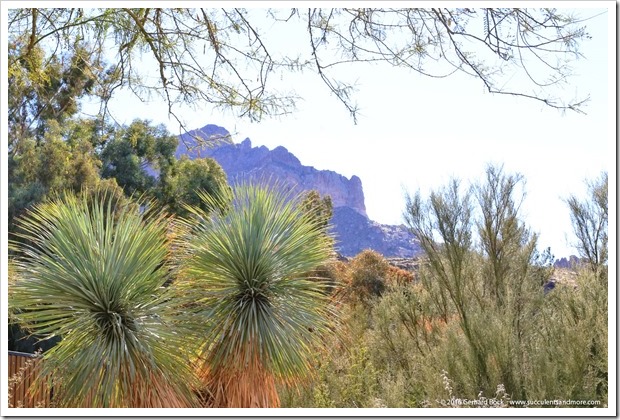 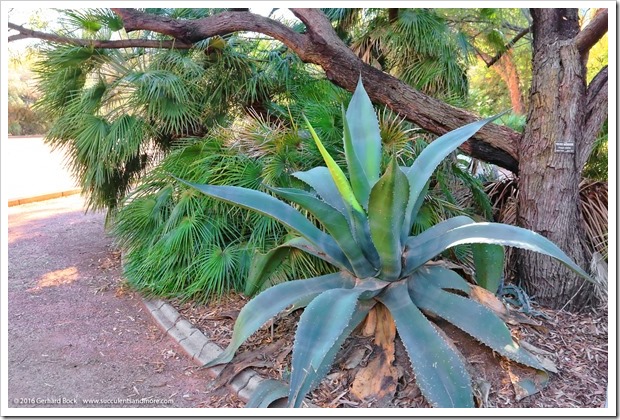 Leaving the Demonstration Garden behind, I rejoined the main loop trail. Texas persimmon (Diospyros texana). The berries it produces are edible but I was particularly fascinated by its striking trunk. 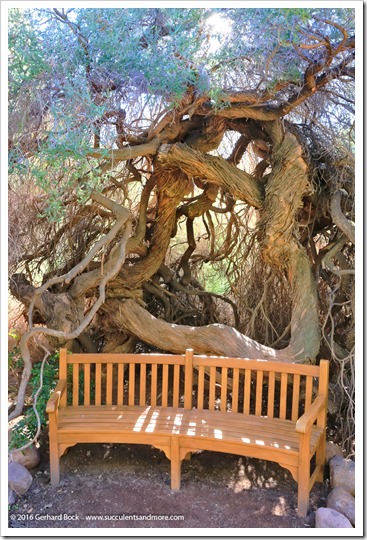 This could be straight out of a gothic movie set!

My next stop was at the Cactus & Succulent Garden, for me the main attraction at the Boyce Thompson Arboretum. That will be the main focus of part 2 of this post. Please check back on Tuesday.