Fellow Davis gardener Sue Fitz is no stranger to this blog. I’ve featured her expansive backyard a few years ago and I’ve written about her volunteer work at Woodland High School. Now it’s time to take a look at her recent front yard makeover.

A year ago the Fitz’s front yard looked like this: 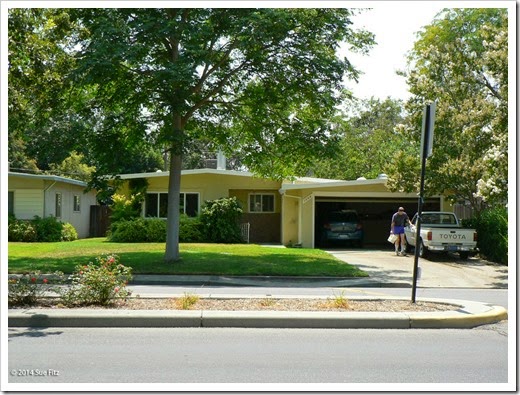 With a lawn sloping down to the sidewalk and foundation shrubs against the house, it was the kind of old-school front yard all of us are used to seeing.

But no more. This is what the Fitz front yard looks like now: 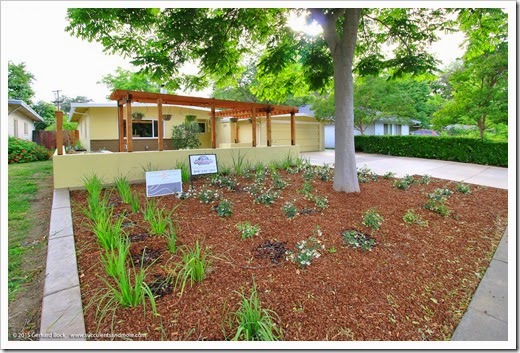 The lawn has been replaced with two distinctive areas—one public, one private—separated by hardscape. 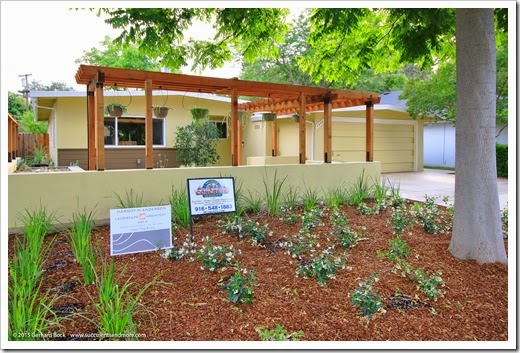 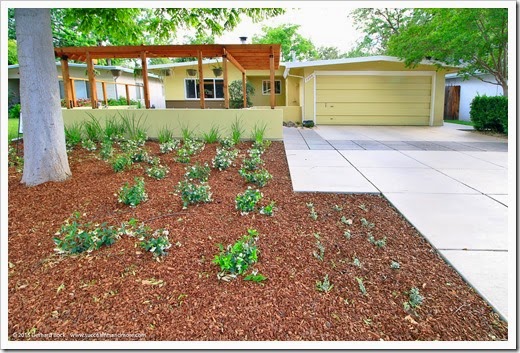 Initially Sue had toyed with the idea of planting cacti and other succulents here—a miniature Huntington Garden—but the leaves from ash trees to the north of their house blow into their yard in November and December, and their own Koelreuteria elegans drops seed pods and leaves in January. The thought of removing debris from dozens of spiky plants for three months out of the year was just too much. 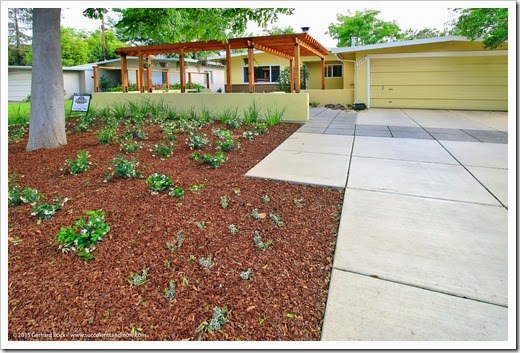 The old driveway was replaced with colored concrete that seamlessly ties in with the hardscape of the private courtyard in front of the house.

The most distinctive feature is the redwood pergola that visually defines the space and gives it height. 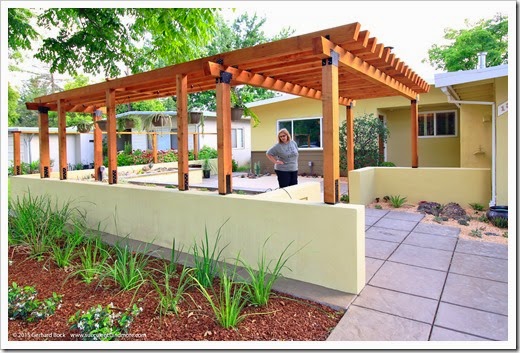 It also gives Sue a place to hang her trailing cacti and succulents. (A drip irrigation line runs up the back of the pergola and along the top to each container.) 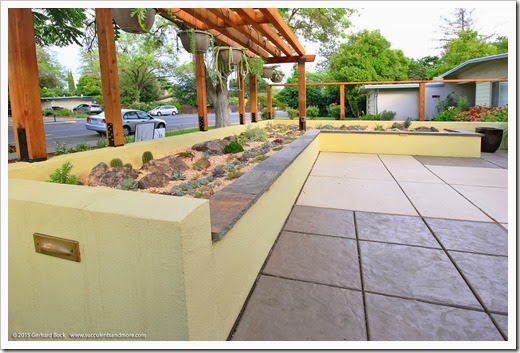 While the pergola visually dominates the courtyard, the standout feature for me is the L-shaped raised bed. Impeccable constructed of poured concrete and beautifully finished to match the stucco of the house, the inner wall is capped with slabs of slate that provide a comfortable place to sit. 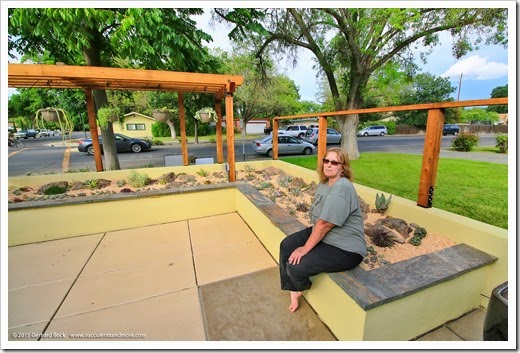 A low L-shaped wall (lower left in the next photo) that matches the height of the raised bed gives a sense of privacy to the entry area. A swinging gate to be installed soon will further separate the courtyard from the driveway. Sue says that complete strangers have walked right up to the house to check out the project. While she enjoys talking to people about what they’ve been doing, she doesn’t want the courtyard to become a public gathering place. I couldn’t agree more. 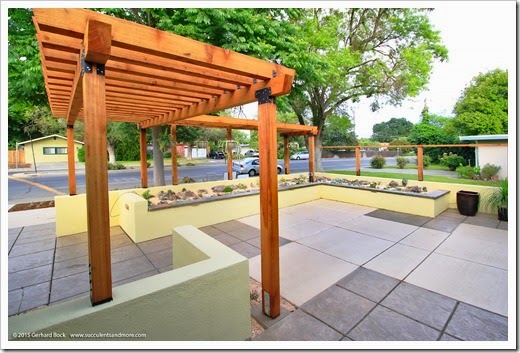 Here’s a panorama showing the courtyard:

The plantings against the house were removed entirely expect for the specimen-quality contorted filbert (Corylus avellana ‘Contorta’) you see below. It now anchors this space with its twisted branches and dark green foliage. 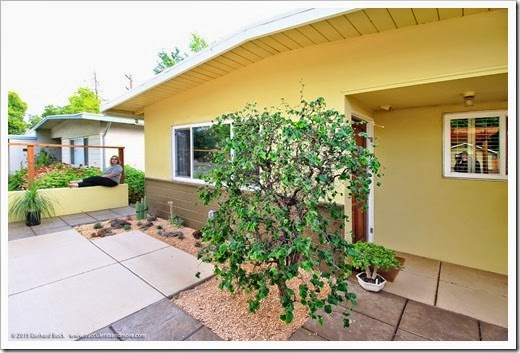 The bed in front of the living room is now home to a variety of succulents. Like in the raised beds, they’re planted in a deep layer of decomposed granite, which offers sharp drainage yet retains enough water so irrigation is only necessary every 7-10 days. Drip irrigation lines are buried in the new beds. 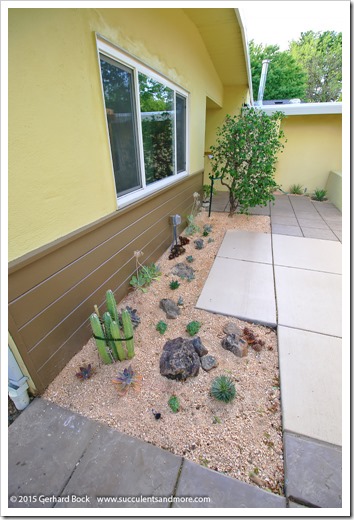 Sue’s vision for the raised bed was inspired by a visit to the Sherman Library and Gardens in Orange County where she saw this undersea-themed succulent tapestry.

Since the plantings are so recent, it takes a bit of imagination to envision what Sue’s succulent tapestry might look like in a year or two, but I think it will be a show stopper. 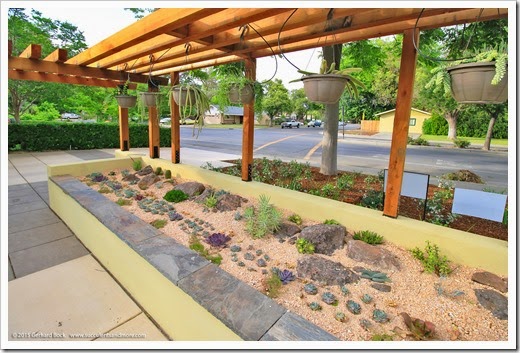 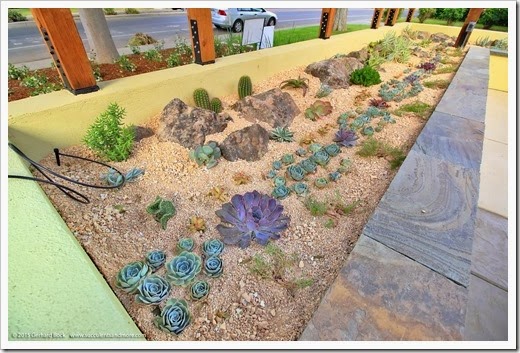 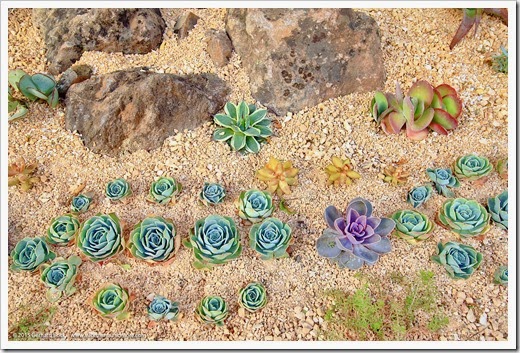 I hope that other homeowners, both locally and elsewhere, will be inspired to transform their own lawn-centric front yard into something much more exciting. The potential is there, no matter what your property looks like now.