It’s not unusual for us to have foggy nights and mornings, but this year the fog has been extreme. Right now the sun is out, but it’s been a rare sight in the past few weeks.

I must admit, though, that I love what the fog does: It makes even familiar sights look mysterious, even unsettling, and it muffles all sound so the world is shrouded in a peculiar stillness. 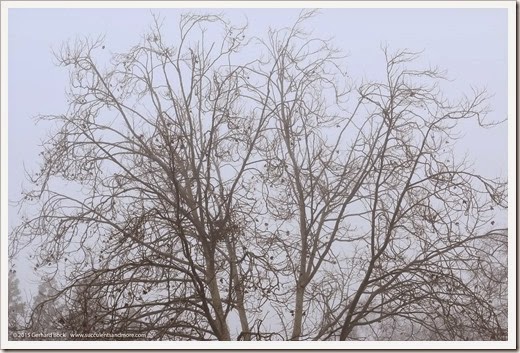 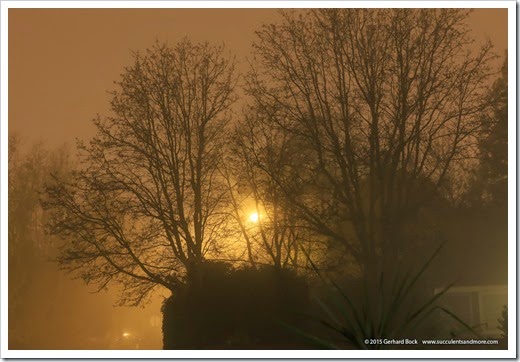 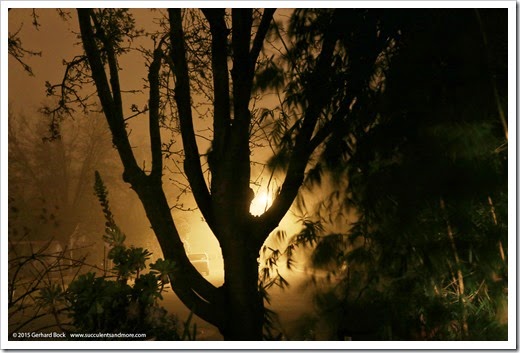 Our own Bradford pear tree and Asian lemon bamboo 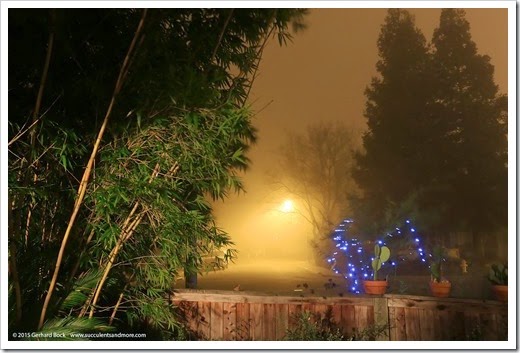 Asian lemon bamboo and redwood trees across the street 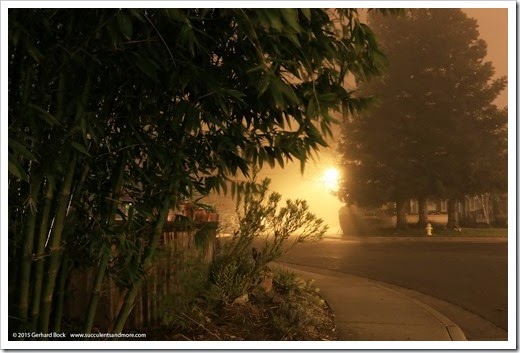 Bambusa oldhamii and redwood trees across the street 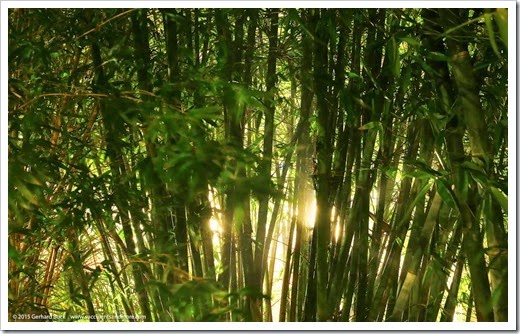 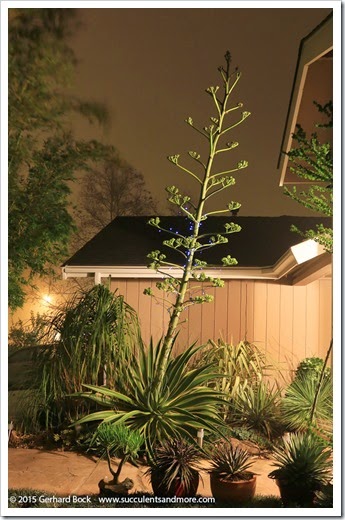 Straight of out a film noir 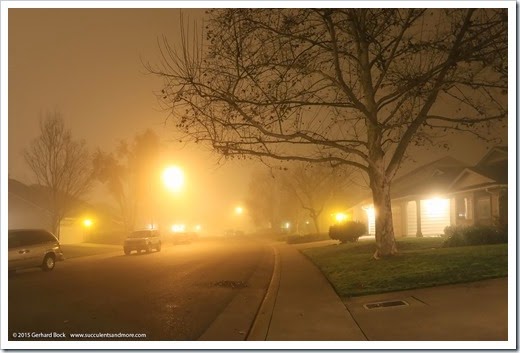 Yesterday daughter #1 and I drove to Berkeley, and the fog extended past Vallejo… 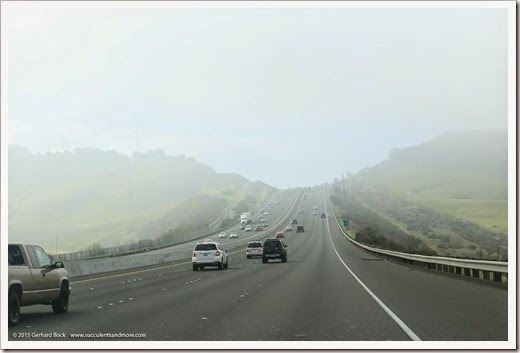 …to the Carquinez Bridge. Usually the situation is reversed: It’s sunny east of Vallejo (our side) and you hit a wall of fog right as you descend past the Hunter Hill Rest Area on Interstate 80. It’s been a weird winter. 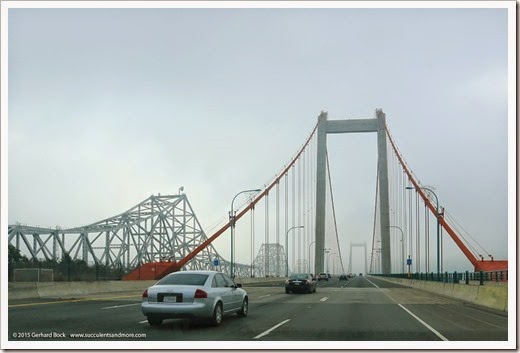 The Daphne odora ‘Maeijima’ I bought my wife for Valentine’s Day and subsequently planted against the backyard fence has thrived in its new home. It’s covered with flower buds, which should open very soon if the sun stays out long enough. I love how pronounced the creamy leaf edge has become. I wonder if it’s because it gets a fair amount of morning sun, especially in the summer when the sun is higher in the sky? 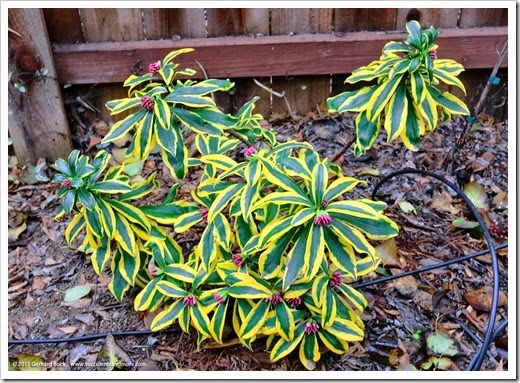 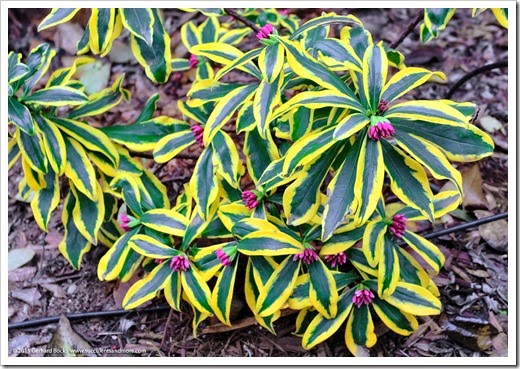 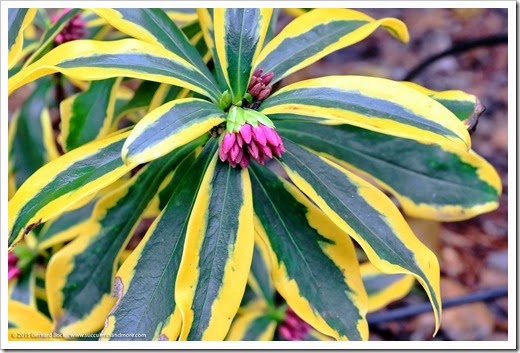 Years ago I planted what I thought was a clumping bamboo named Fargesia robusta in the backyard. Over time it became clear that the label had been wrong. Most likely it was Fargesia dracocephala ‘Rufa’, a very popular and much more compact clumper.

‘Rufa’ ‘was fine as long as it was protected by the Pittosporum tobira hedge on the other side of the fence, which was a good 10 ft. tall. However, we removed that hedge in March 2013 to create the front yard desert garden bed. After that, ‘Rufa’ suffered from the additional sun exposure and the fact that I had drastically reduced the amount of irrigation.

The time had come for it to go. 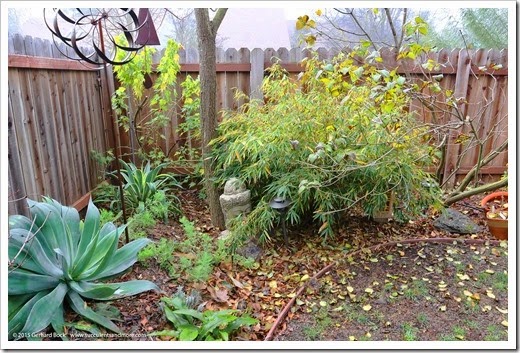 In its place is now a bird’s nest banksia (Banksia baxterii), a shrub from Western Australia that has both unusual leaves and unusual flowers (see images here). My only fear is that it might get too big for this space, but judicious pruning should be sufficient to keep it in check. 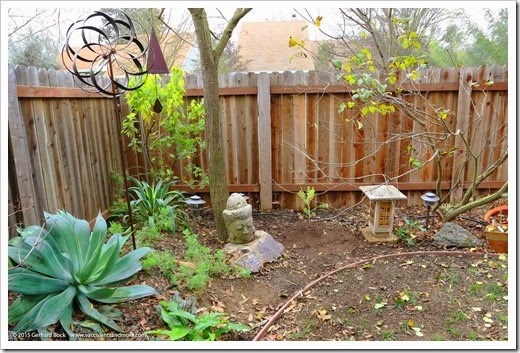 The Guanyin head and the Japanese granite lantern look a bit out of place now, but if you can have fusion cooking, you can surely have a fusion planting/yard art theme! 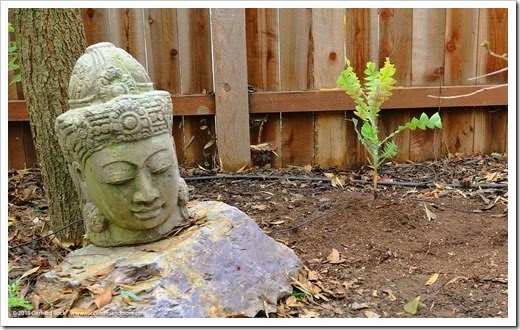 Another recent bamboo project, this time in the front yard, was of the maintenance variety. I spent a few of hours removing dozens of new culms from this Bambusa multiplex ‘Alphonse Karr’.

Here is the before image: 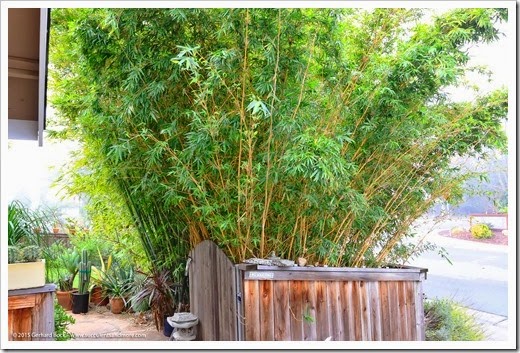 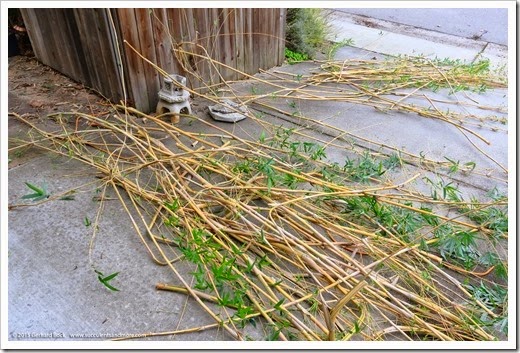 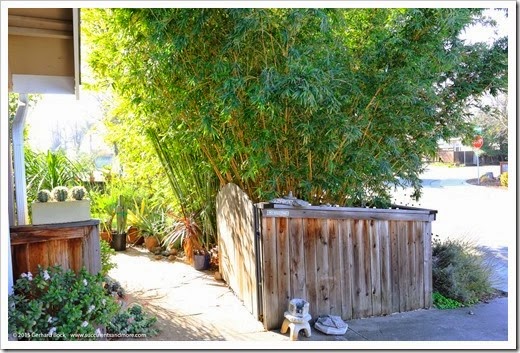 “After” may not look so different at first glance, but believe me, I did a lot of work in there. The clump is now much less congested and looks much better.