So, how often does it snow in Tucson?

I asked a bunch of people today, and their answers ranged from once a year to once every three years.

As you may remember from yesterday’s post, it had started to rain in the afternoon. The rain never stopped, and when I looked out the window at 11pm just before going to bed, it was turning to snow.

This morning, while there was no snow on the ground here in downtown Tucson, there was some on the cars in the parking lot of my hotel. I left at 8 a.m. and headed west towards Gates Pass (3,172 ft.), which crosses the Tucson Mountains before dropping down to the flats where both the Arizona-Sonora Desert Museum and the Western Unit of Saguaro National Park are located.

I knew I was going to see some incredible sights in the Tucson Mountains as I was getting closer: 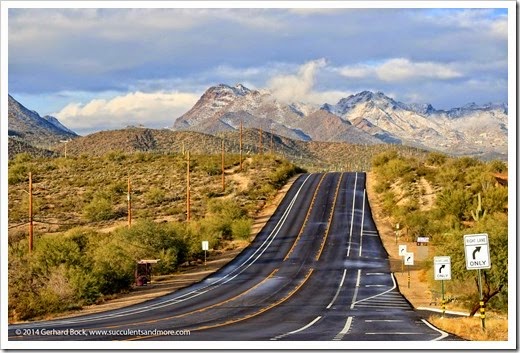 And I was right: 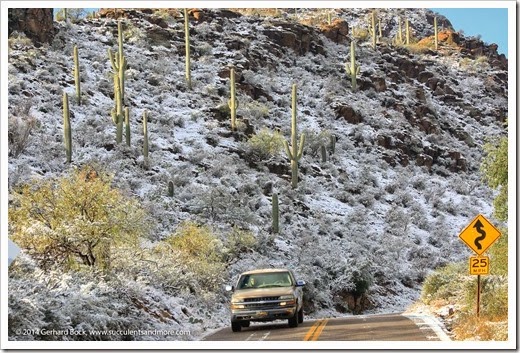 Never in my wildest dreams would I have imagined that I’d be seeing snow in the desert. This was winter wonderland taken to a whole new level. I had never seen saguaros, chollas or palo verdes covered with snow before!

“Magical” is a much over-used word. It should be reserved for this: 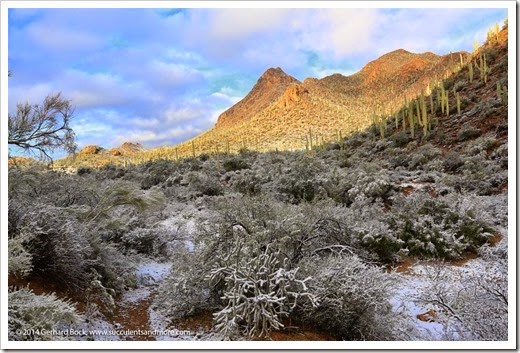 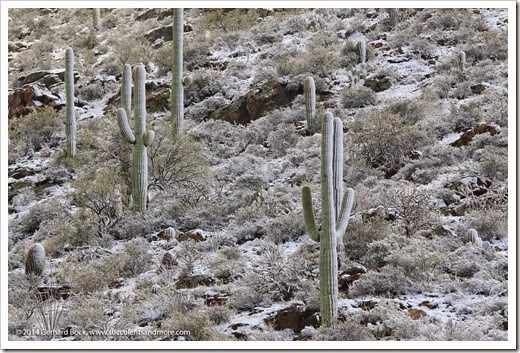 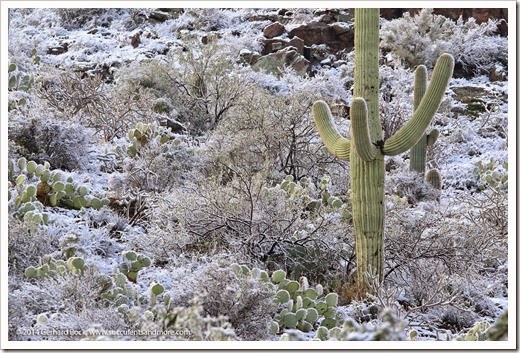 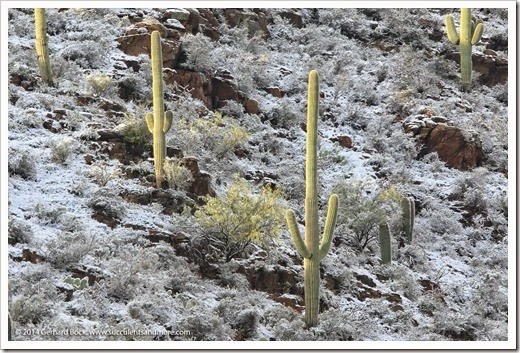 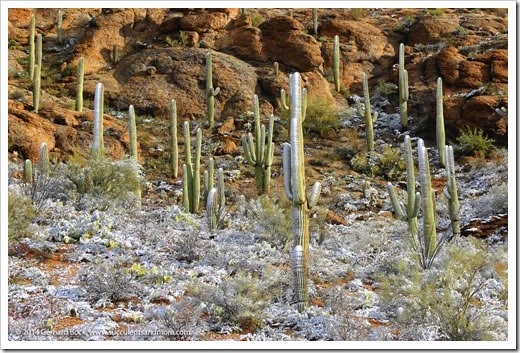 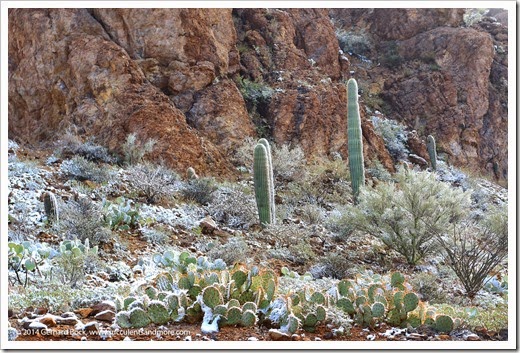 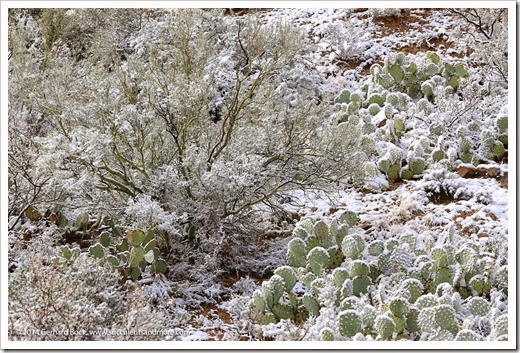 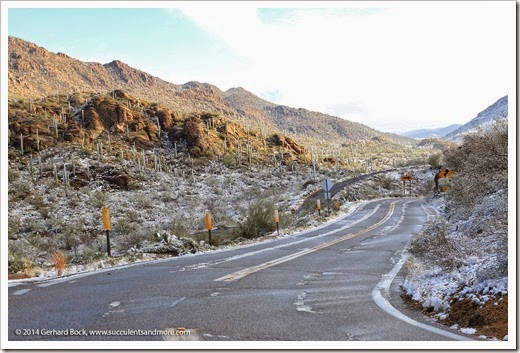 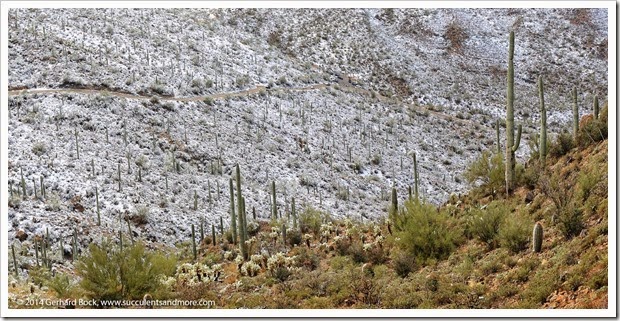 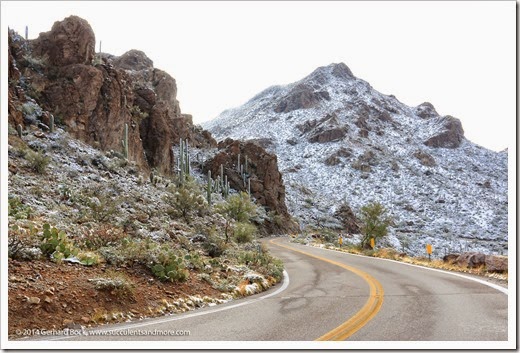 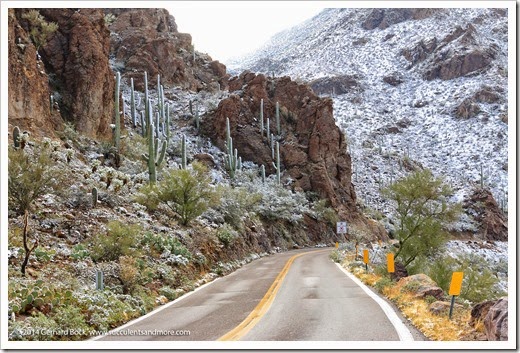 Gates Pass Road dropping down west of the pass

I arrived at the Arizona-Sonora Desert Museum at 10 a.m.

While the snow was already melting, there was still plenty left on many plants. 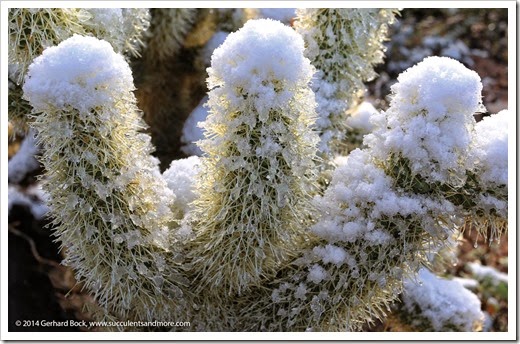 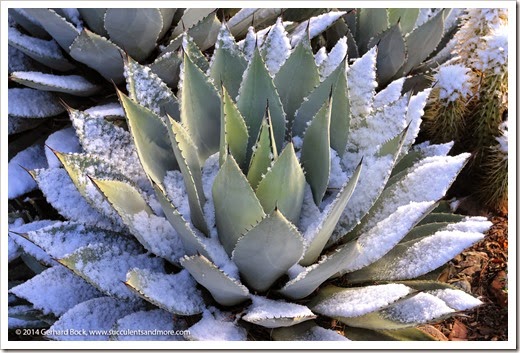 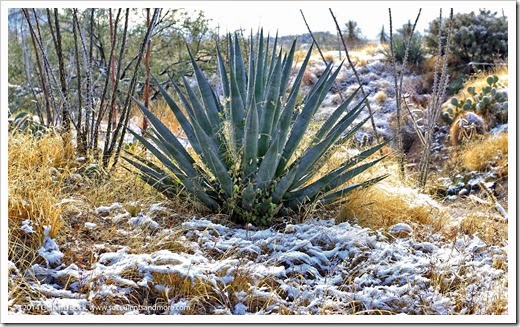 Agave chrysantha—or is it Agave palmeri? 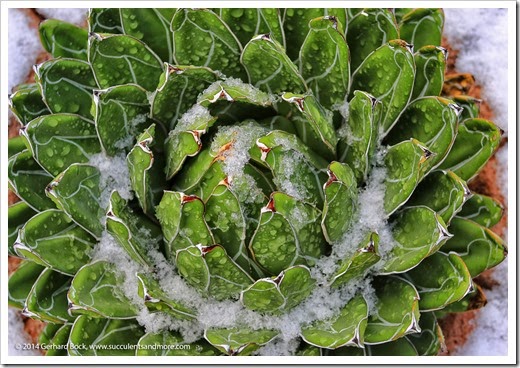 I took so many photos of agaves in the snow, I’ll have a separate post on the topic.

The thing that intrigued me the most was the Museum’s creative ways of protecting frost-sensitive cacti:

I saw everything from Styrofoam cups and plastic nursery pots to bird seed and dog food bags. 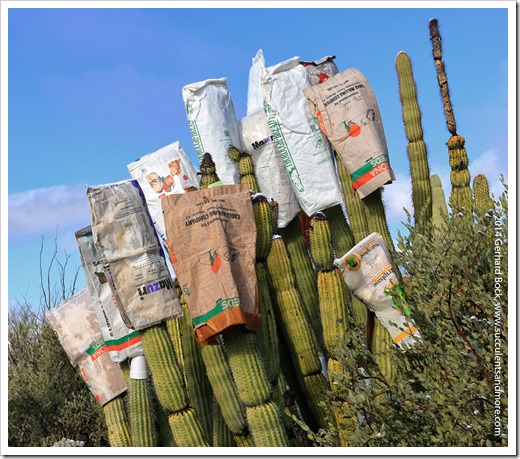 With cactus, the most parts to protect are the tips, i.e. the growing points. That’s why it isn’t necessary to cover the entire cactus—which would be difficult on large plants anyway. Even covering the tips isn’t trivial on a 10 ft. organ pipe!

In the Cactus Garden, more than half of the plants were covered. Not a good time to explore the large variety of cacti that grow there! 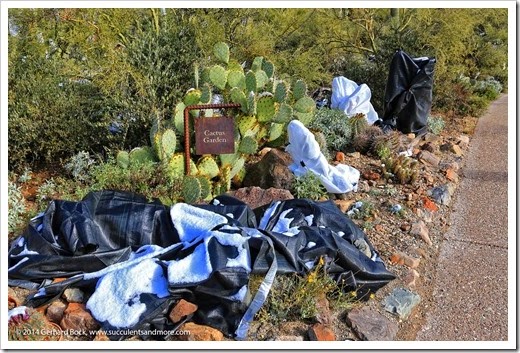 One benefit of the cold weather: It really brings out the intense purple coloration in prickly pears, like in this Opuntia violaceae. For some reason, mine never get this purple! 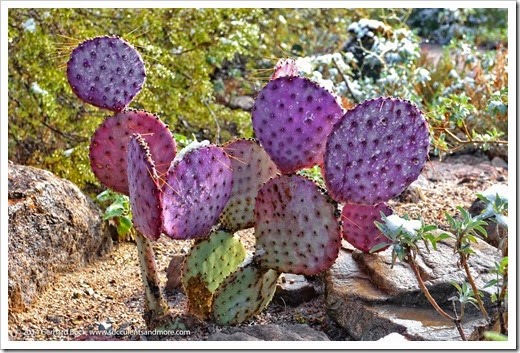 As temperatures were rising, the snow was melting at a rapid clip. The patio in front of the Mountain House Gift Shop looked like there had been a heavy downpour. 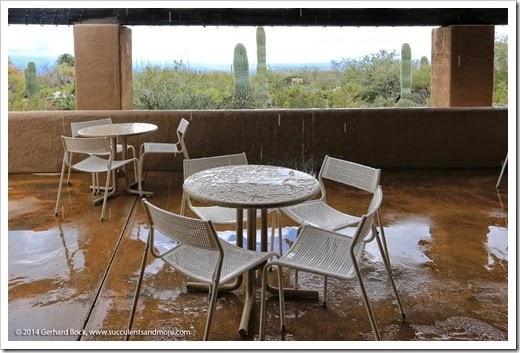 By mid-afternoon the snow was all but gone, but dramatic clouds were lingering in the east: 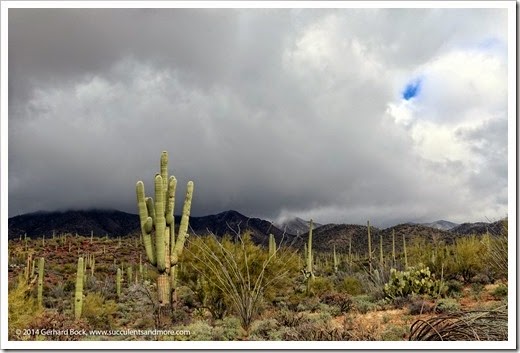 Today truly was a memorable day. And I already have enough photo material for our 2015 Christmas card!