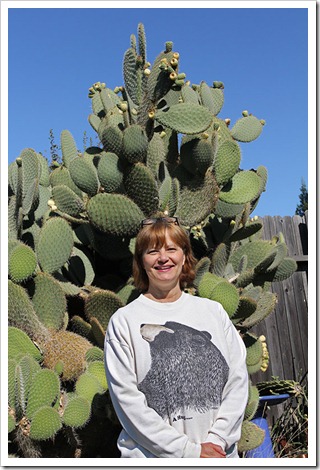 The other day I finally had the opportunity to visit Candy “Sweetstuff,” a fellow succulent aficionado in the Sacramento area. I had come across her blog, Sweetstuff’s Sassy Succulents, earlier in the year and had been following it religiously. We tried to meet up at Succulent Gardens’ Extravaganza in early October but somehow missed each other. On Monday I finally made the 45-minute drive to her house in Roseville, east of Sacramento.

As I was driving down her street, I had a hard time spotting street numbers on some of the houses but there was no missing Candy’s house: succulents on either side of the house and along the walkway up to the front door!

While at our house we have succulents interspersed with lots of other types of plants, Candy’s front and backyard are all succulents. I jokingly told her that she could open her own backyard succulent nursery! I have no idea how many different genera and species Candy has, and I’m not sure even she knows. But there are many.

Candy and I were so busy talking “shop” that I had to remind myself occasionally to take photos. But I did take some, so come along on a visual tour of “Sweetstuff’s” succulent wonderland.

Leaving behind the backyard, let’s now move around the house to the front.

In the winter, Candy moves many of the potted plants you see in the photos above into the garage to protect them from rain and freezing temperatures. Containers that are too large to move get covered with frost blankets if needed.

Time flew by very quickly and before I knew it, it was time to go. But before I headed out, Candy loaded me up with a bunch of cuttings—succulents are the ultimate pass-along plants because they offset so freely and root very easily from cuttings. As I was pulling away from the curb, I had a big smile on my face and felt like Christmas had come early this year. Thank you, Candy, for your kindness and generosity!

Here are my cuttings: