In our backyard, there is a beautiful small tree that is visible from the dining room window. People invariably ask what it is, and when we tell them it’s a chaste tree (Vitex agnus-castus), they get a blank look on their face—either because they have never heard of this tree before, or they can’t quite figure out what chastity has to do with it.

I had no idea either so I did some research. I love what I found on Wikipedia:

In ancient times it was believed to be an anaphrodisiac, hence the name chaste tree. Pliny, in his Historia Naturalis, reports the use of stems and leaves of this plant by women as bedding "to cool the heat of lust" during the time of the Thesmophoria, when Athenian women left their husband's beds to remain ritually chaste. […] Chaucer, in "The Flower and the Leaf," refers to it as an attribute of the chaste Diana, and in the 16th century the English herbalist William Turner reports the same anaphrodisiac properties of the seed, both fried and not fried. More recently, this plant has been called monk's pepper in the thought that it was used as anti-libido medicine by monks to aid their attempts to remain chaste. There are disputed accounts regarding its actual action on libido, with some claims that it is anaphrodisiac and others that it is aphrodisiac. Because of the complex mechanism of action it can be probably both, depending on concentration of the extract and physiologic variables (see below).

A few years ago somebody posted a note on our local Freecycle site looking for chaste-tree berries, and she did come by and collect some from our tree. I now wonder whose libido she tried to suppress? 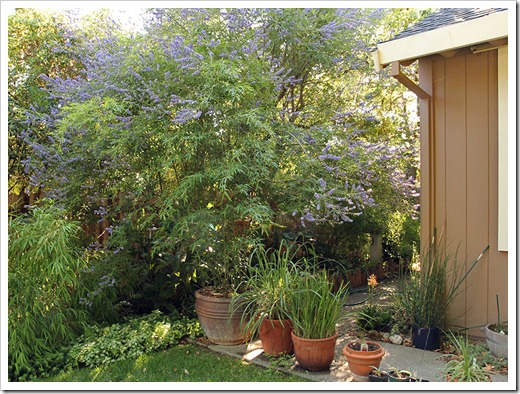 Chaste tree in bloom in our backyard

All that aside, we love our chaste tree. We bought it as a tiny plant in a four-inch pot, and in the 10 years it’s been in the ground it has grown into compact 15 ft. tree that provides just the right amount of shade for our Asian-themed woodland garden.

Native to the Mediterranean and hardy to zone 7, the chaste tree does superbly well in our climate and deserves to be grown much more widely. It is at its most beautiful in July when it is covered with flower spikes that bear a superficial resemblance to butterfly bush (Buddleia). Some chaste tree varieties have flowers that are violet, others are almost white, but my favorite is the kind we have with vibrant purplish blue flowers.

During the day, the tree is abuzz with all kinds of bees, including very large black bumblebees. I love ducking under the branches, now weighed down by the blossoms, and being surrounded by a symphony of bee sounds. 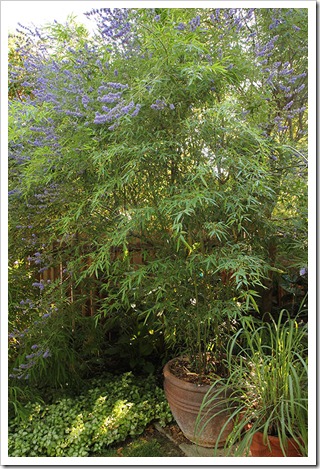 Black bamboo (Phyllostachys nigra) in front of our chaste tree 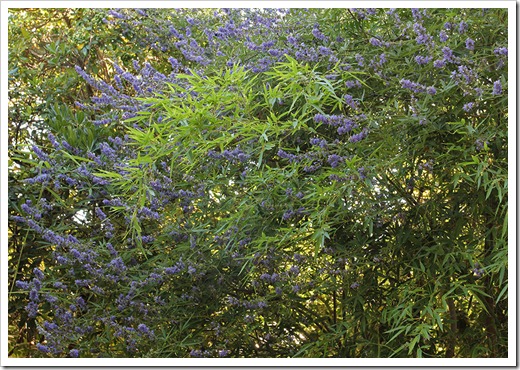 The chaste tree is beautiful even when there are no flowers. Its leaves are delicate and elegant, and they give off a faint aroma that I would describe it as a cross between sage and eucalyptus.

Speaking of leaves: They have fooled people, both in times past and now. Early settlers in the West Indies confused the chaste tree tree with the castor oil plant (Ricinus communis). And a guest of ours who shall not be named once was equally confused when she thought that our chaste tree was a giant cannabis plant! Looking at the leaves alone, none of these guesses are that far-fetched (see photos below). 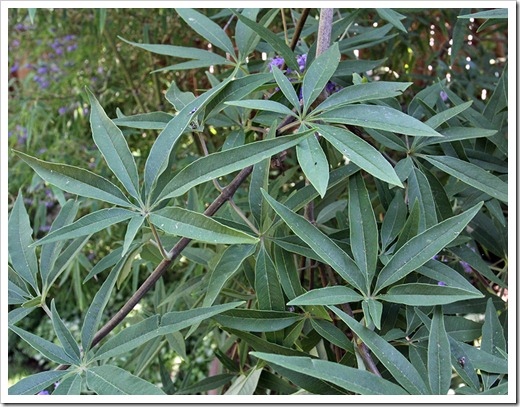 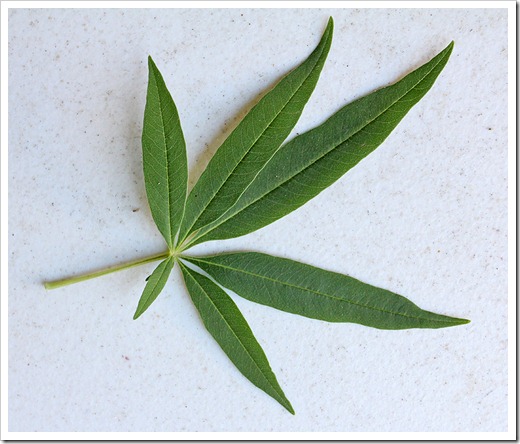 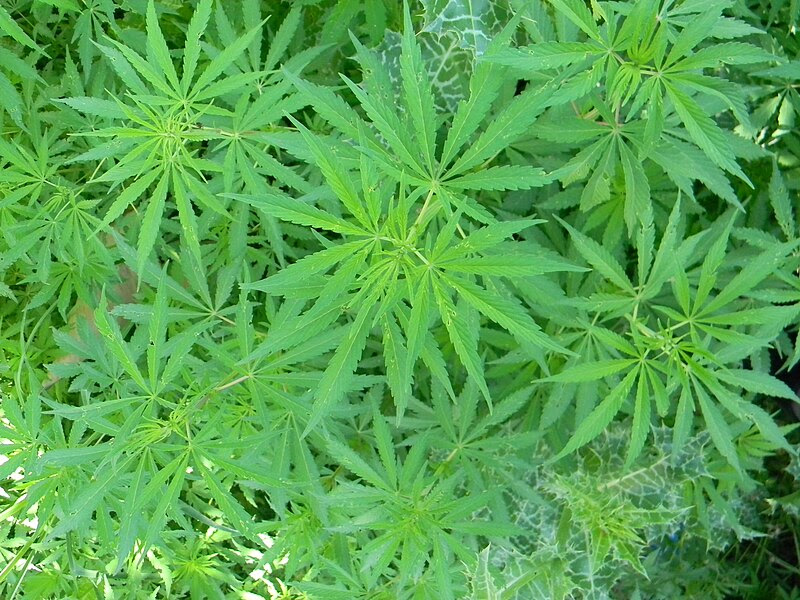 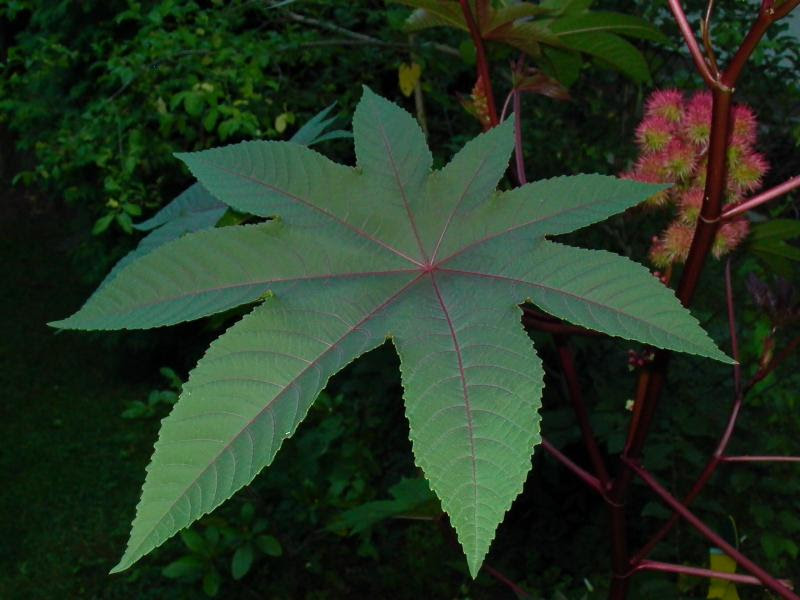 If left to its own devices, the chaste tree tends to develop multiple trunks, each with many branches, eventually resulting in a large round shrub. However, it can easily be shaped into a proper tree and takes very well to pruning. Ours has two trunks growing in a V, and we keep the interior open and airy.

If you live in an an area with relatively mild winters (zone 7 and above) and are in need of a small tree to act as a focal point, look no further! 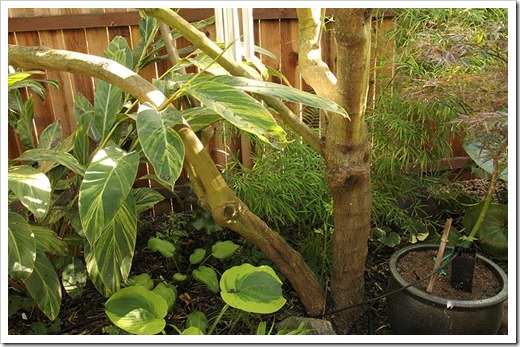 V-shaped trunk of our chaste tree. The bamboo behind it is Drepanostachyum sengteeanum. 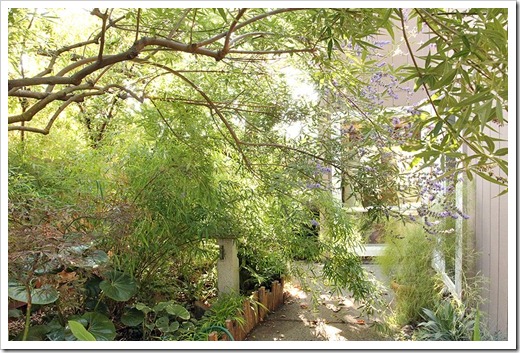 Looking towards the dining room window. The lower branches will need to be pruned this year, as does the chocolate bamboo (Borinda fungosa) growing next to the chaste tree—some culms are so heavy with leaves that they all but hide the granite lantern.