The biggest spectacle in the Sacramento area summer calendar is the California State Fair. It’s always at the hottest time of the year, so sweating is as much part of it as the livestock and agricultural exhibits, the bad-for-you food, and the raucous and tacky midway.

We went on Friday because the Cal Expo fairgrounds, home of the California State Fair, opens early at 10am. This allowed us to do the outside exhibits before the sun got too hot. We started with the farm animals—horses, pigs, sheep, cows, etc.—and it’s easy losing track of time as you watch sheep being shorn, llamas paraded around the ring like dogs at a dog show, pigs snoozing in the heat, and similar vignettes of livestock bliss. However, when a miniature horse started to nibble on my younger daughter’s shirt and got a piece of skin in the process, it was time to saunter on.

As usual, one of the highpoints for me proved to be the Farm, a living exhibit chock full of farm crops and vegetables. Because spring this year was longer and cooler than usual, things aren’t as far along as they normally would be at the end of July. I didn’t see any ripe tomatoes or corn, and the patches of pumpkin and squash were still mostly flowers. Still, I couldn’t help but admire—and envy—the lush and dense plantings. I have no idea idea how heavily they are fertilized, but they must get pampered an awful lot.

Considering that rice is an important commercial crop in California, I was happy to see a miniature rice field complete with a levy. The larger section was still green, while the smaller section (on the left in the photo below) had already started to set seeds.

Another larger demonstration field was dedicated to milo, or grain sorghum. In the U.S., milo is mostly grown as livestock feed and to make syrup, while in Asia and Africa it’s a dietary staple for humans. In fact, milo is the third most important food crop worldwide, according to an interpretive sign.

Floral displays were found everywhere, and I noticed that some of them included vegetables and cereal grasses, like corn in the following photo. I thought that was a nice touch for a fair that has such a long agricultural tradition (the first California State Fair was held in 1854 to share knowledge among farmers and ranchers).

As in previous years, the grass-covered truck and tractor were back. Unfortunately, they didn’t look as nice as they might have when the Fair opened a couple of weeks ago. I don’t know how often they get watered, but it looks like it isn’t quite often enough. Still, it’s fun seeing an entire vehicle covered in grass like giant Chia Pet.

Water conservation and water-wise gardening were major topics this year. This is an issue that is dear to my heart, and I was happy to see displays of drought-tolerant perennials such as black-eyed susan, Russian sage, lamb’s ear, lantana, and the like. Even more exciting was seeing monarch butterflies visiting the flowers. People may walk by a bed of beautiful flowers without a second glance, but butterflies never fail to get them to stop and take a second look.

In addition to American natives, drought-tolerant plants from Australia and South Africa—countries with climates similar to ours—were on display in the Save Our Water demonstration garden. Kangaroo paws were everywhere. Landscape designers have clearly discovered their structural elegance.

As we were walking around the fairgrounds, my bamboo radar was in full gear, but there wasn’t much as bamboo in evidence as I had hoped. My first sighting was in the ghastly Big Bugs exhibit—giant robotic insects inside a dimly light tent that only young kids could get excited about. At the exit there were two pots of black bamboo (Phyllostachys nigra) that I’m sure were waiting for the Fair to end so they could see daylight again.

The most prominent bamboo I saw was a fairly mature clump of Bambusa oldhamii at the edge of the Farm. It was underplanted with various kinds of tropicals, such as elephant ears and coleus. The result was a rather lush oasis. I can’t wait for our own Bambusa oldhamii to get to this size! 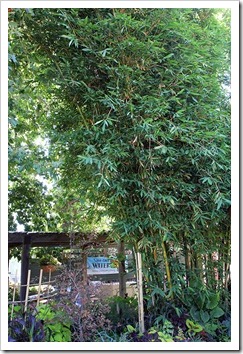 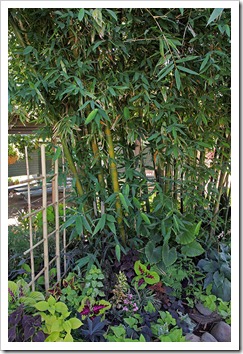 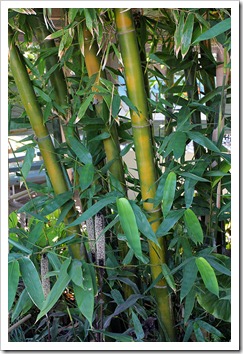 The other bamboos I spotted were in the Kangaroo Joey’s Big Adventure exhibit. While my family was looking at the animals (young kangaroos, hedgehogs, porcupines, pythons, etc.), I was checking out the plantings.

After being outside in the heat for a few hours, we finally took refuge inside the air-conditioned halls. While they often verge on the tacky, I enjoy looking at the county exhibits where each county gets to design their own space. Our county, Yolo, had this year’s winning booth. Out of patriotic pride, here’s a photo of it (although my personal favorite was Placer County, but don’t tell anyone).

As the kids were looking at bunnies, chickens and the like, I dashed into the fine arts pavilion next door. I love seeing the creativity displayed by mostly unknown artists, and this year had some strong pieces as well, including a giant metal shade structure (Whale of a Good Time by Terrence Martin from West Sacramento).

After the equivalent of six Red Bull’s worth of fine arts, I felt creatively inspired and snapped this photo as we were heading towards the exit. Maybe I will enter it in next year’s Fair!

This year the California State Fair runs from July 14-31. If you want to go, you’d better hurry since Saturday and Sunday are the last couple of days.