Since this a gardening blog, I normally don’t talk about man-made structures other than what is typically found on a residential property. However, this one is so special that I decided to dedicate a blog post to it.

The Sundial Bridge in Redding, CA, two and a half hours north of Sacramento, is a futuristic-looking pedestrian bridge across the Sacramento River. It connects the north and south campus of Turtle Bay Exploration Park and provides access to the 16-mile Sacramento River Trail.

The Sundial Bridge was designed by Santiago Calatrava, one of the leading architects and bridge designers in the world. Its cantilever spar cable-stayed design was pioneered by Calatrava and first seen in his Alamillo Bridge in Seville, Spain (completed in 1992). Calatrava has created several other bridges with the same visual signature, most recently in Jerusalem, Israel and Dublin, Ireland. Calatrava is also the designer of the World Trade Center Transportation Hub currently under construction in New York City.

The deck of the Sundial Bridge is surfaced with translucent green glass tiles that are lighted from below at night, turning the bridge into giant aquamarine sculpture.

The 217-ft. support tower forms the gnomon of a sundial—the part that casts the shadow. The sundial is accurate only on June 21, summer solstice. The tip of the shadow moves about one foot per minute, fast enough for the movement to be seen with the naked eye.

The Sundial Bridge is now an iconic landmark for the city of Redding but initially is was very controversial. The Calatrava design was championed by a small group of civic leaders, but the populace at large was against the sleek modern design and wanted a more “folksy” covered bridge. However, since a large part of the funding came from the private McConnell Foundation, the Calatrava proposal was given the green light. Construction took longer and cost more than anticipated due to difficult engineering challenges but the bridge was finally completed in 2004—three years behind schedule, and at a final cost of $23 million. 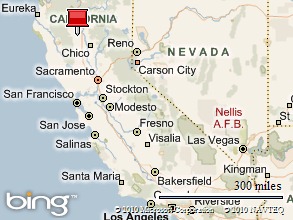 Regardless of the criticism still expressed by its opponents, the Sundial Bridge has achieved something Redding sorely needed: It has turned this blue-collar city of 80,000 into a tourist destination. People who would pass through on Interstate 5 without stopping now do stop. Others come specifically to see the bridge and in the process discover that Redding is much more than what they expected.
architecture landmarks