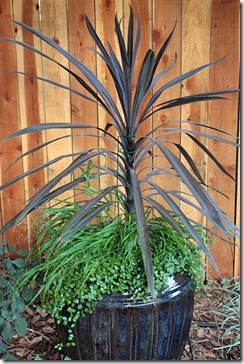 A few days ago I freshened up a large glazed pot that has been under the bay trees in our back yard for the last three years. In its original incarnation (see photo on the right), it contained a purple cordyline (Cordyline australis 'Purple Sensation'), a Japanese forest grass (Hakonechloa macra) and a creeping wire vine (Muehlenbeckia axillaris).

The cordyline snapped in half during a windstorm because its stem was thin and weak. I replanted it in a different pot where it’s been doing well. The Japanese forest grass got moved to the “Japanese” garden outside the dining room because it looked too crowded in the pot. What stayed was the wire vine.

The next feature plant was a young Australian tree fern (Cyathea cooperi). The vision I had in my head was grand but the tree fern just didn’t do much at all. For every new frond it produced, it lost an old one so it never got any bigger. I suspect it had to do with our low humidity and high temperatures in the summer—very different from the climate where they grow natively. So a few weeks ago, I yanked out the tree fern. What stayed was the wire vine. 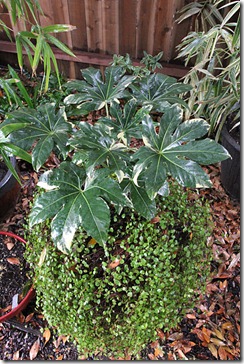 The wire vine, over the last couple of years, has grown tremendously. What I originally planted were two 4” containers, one on either side of the pot. Now the pot is all but invisible beneath the cascading tangle of leaves and intertwining stems. I love the effect; it’s like a miniature version of an overgrown old garden.

The moribund tree fern has now been succeeded by a variegated Japanese aralia (Fatsia japonica ‘Variegata’). When I was at Capital Nursery in Sacramento on Saturday, I initially picked out another cordyline but when I saw this aralia, I had to have it. Its large leathery leaves are a perfect foil for the dainty-looking but tough leaves of the wire vine. I’m very pleased with this new combination and I hope it will last longer than any of my previous experiments.

I’ve read reports online where people complain of how invasive creeping wire vine is when planted as a groundcover. They say that the stems root wherever they touch the ground. Since mine is in pots, I’ve not had any problems. Considering that the ground under the bay trees is a near-solid mat of fibrous roots, and bone-dry to boot, I’m not worried that it will take over.

We also have wire vine planted in a pot next to the granite lantern in our Japanese-inspired garden bed outside the dining room. The “thriller” plant here is a sword fern (Nephrolepis exaltata), and its growth habit and texture form a beautiful complement to the wire vine.

Can you tell that I just love this intricate-looking plant that is tough as nails?