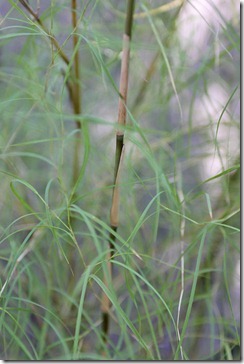 Looking at the photos in this post, it’s easy to see why so many people think this is a type of bamboo. Its lacy foliage is strikingly similar to Mexican weeping bamboo (Otatea acuminata subsp. aztecorum). Its shoots look like bamboo shoots, and its culms (stems) have culm sheaths—the papery leaves that form a protective casing around new shoots and eventually fall off.

But bamboo muhly (Muhlenbergia dumosa) is not a bamboo, in spite of its common name, its look and its growth habit. It is a clumping warm-season grass native to southern Arizona and northwestern Mexico where it grows on dry rocky slopes up to an elevation of 4,000 ft.

Bamboo muhly grows to a height of 4-6 ft. and is equally suitable for in-ground planting and container culture. Befitting its natural habitat, it prefers well-draining soil but it seems to do OK in heavier soils as well as long as it doesn’t get water-logged for long periods of time. While drought-tolerant, it is not a true xeric plant; it does need occasional irrigation in the summer to growth and look its best. It’s rated for USDA plant hardiness zones 8-10, i.e. areas where winter lows are above 10°F.

I love how the leaves of bamboo muhly form a filigree curtain that provides visual interest yet doesn’t block the view. I can see it being used to great effect in xeriscaping as well as Mediterranean gardens. It would also fit perfectly into a very minimalist design or even a Japanese garden.

We have two of these lovely grasses: One is in a terracotta pot next to the small succulent bed outside our dining room. I pruned it way back last year because it was getting a bit unruly—a treatment it didn’t seem to mind at all. Now the culms are beginning to lean almost protectively over the aloes and agaves next to it.

Our other bamboo muhly is in the ground next to a lime tree at the edge of our driveway. It is much larger than the potted one in the back yard—both plants were the same size when I bought them a couple of years ago—but the base is still a tight clump. I planted it in front of a cable TV utility box and it does a good job of hiding the unsightly contraption without preventing access should it ever become necessary.

I was at Capital Nursery in Sacramento over the weekend, and I was happy to see that they carry bamboo muhly now; previously it was almost impossible finding it locally. A quick web search produced quite a few online sources as well.

Note: If you’re interested in ornamental grasses, you have to take a closer look at the other members of the Muhlenbergia family, especially Muhlenbergia capillaris (Gulf muhly). In addition to fine-textured, needle-thin leaves, Gulf muhly produces outstanding flower panicles that from a distance look like a cloud of pink or white, depending on the cultivar.