In September, I had the opportunity to visit Rancho Soledad Nursery in North San Diego County. Founded by legendary plantsman Jerry Hunter in 1954, Rancho Soledad has been a pioneering force in the California nursery industry for over half a century. Rancho Soledad was one of the first nurseries in the world to establish its own in-house tissue culture lab to produce landscape-worthy plants on a large scale. Popular agave hybrids like 'Blue Glow' and 'Blue Flame' are just two of their many introductions.

Rancho Soledad Nursery is located outside the small town of Rancho Santa Fe, about 10 miles inland from the coast. The sprawling nursery is at the end of Aliso Canyon Road in a rural area increasingly dominated by multi-million-dollar houses on large lots. For a cool $20 million you can buy this 16½ acre ranch three miles away! I bet San Diego County looked very different when Jerry Hunter bought the property in 1960.

I got a personal tour of the nursery grounds by my friend Ryan Penn who now works in propagation and sales at Rancho Soledad. I first met him when he was the horticulturist at the Ruth Bancroft Garden; he later moved to a wholesale succulent nursery in Vista, California, where I caught up with him in November 2018.

Ryan drove me around on an electric cart and showed me parts of the nursery few customers get to see. The map on the Rancho Soledad website makes the nursery seem quite compact. In reality, the grounds occupy 25 acres!

Since Rancho Soledad is primarily a wholesale nursery, most plants aren't labeled; they don't receive labels until they're pulled for an order. I was constantly asking Ryan for IDs as we were driving and walking around, but then I'm big on knowing what everything is. Even so, some photos in the post don't have a plant ID. I guess some things are meant to be a mystery.

My tour started at the Wholesale Office where boxed specimens of succulents, palm trees, cycads, and tropicals get visitors drooling. In fact, I parked right in front of this pair of Agave ovatifolia 'Orca':

Rancho Soledad is still the only commercial source of Agave ovatifolia 'Orca' that I know. They have lots of them for sale, but even smaller sizes are many hundreds of dollars.
In the next photo, you can barely see the Wholesale Office. There are plants everywhere! 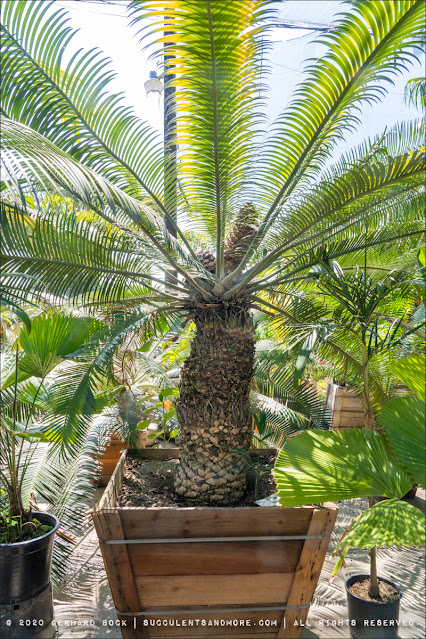 Random sights from our behind-the-scenes walk: 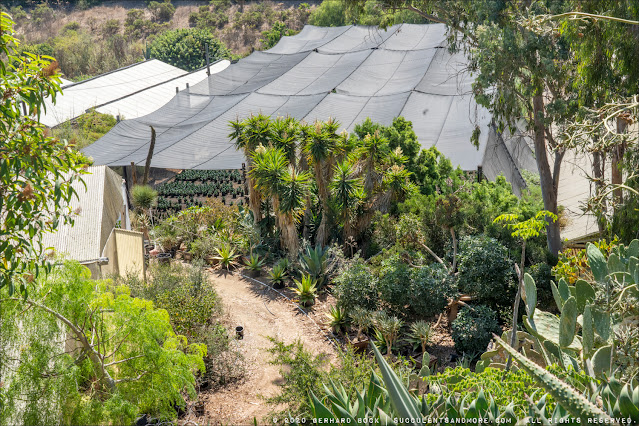 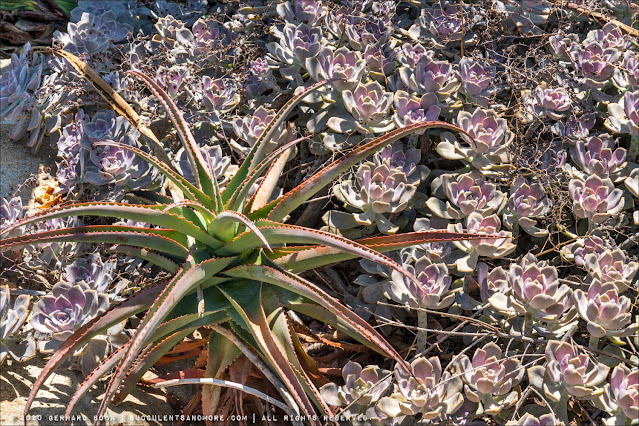 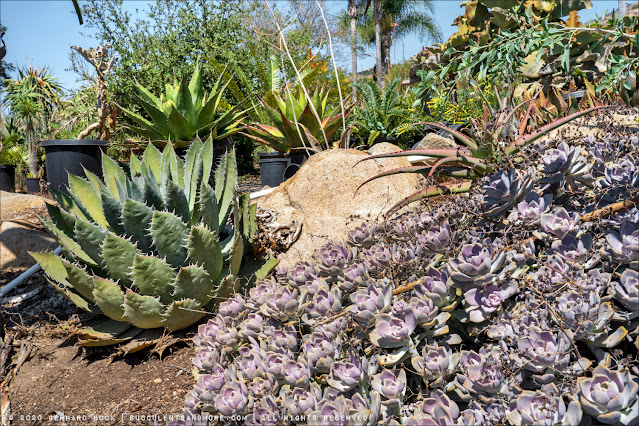 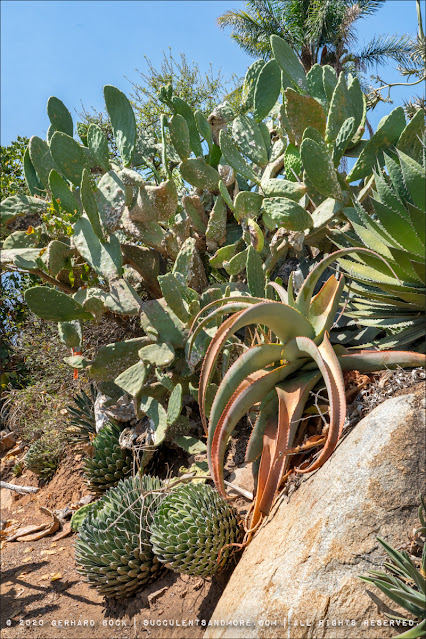 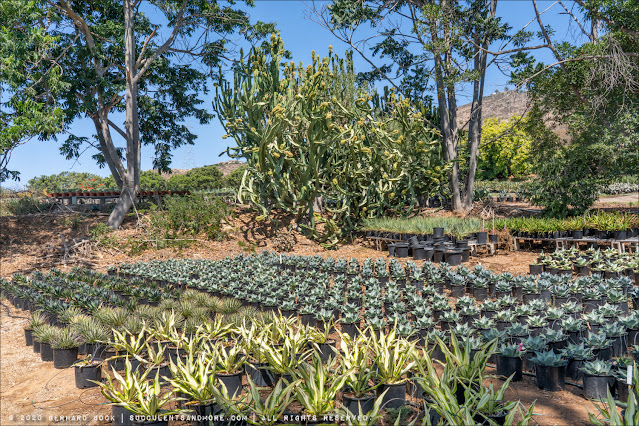 One of my favorite areas at Rancho Soledad is The Hill. At first glance, it may seem like a jumble of spiky plants. Well, it is that, but the plants are choice, and many of them are rare. I believe this area was started by Kelly Griffin during his tenure as curator of xerophytic plants and later continued by Jeremy Spath. Now Ryan has picked up the torch. 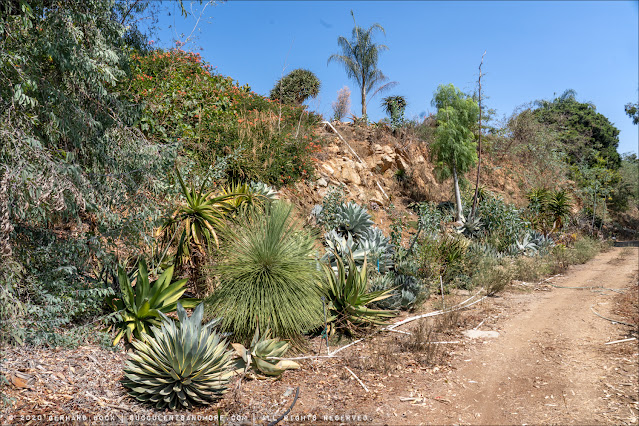 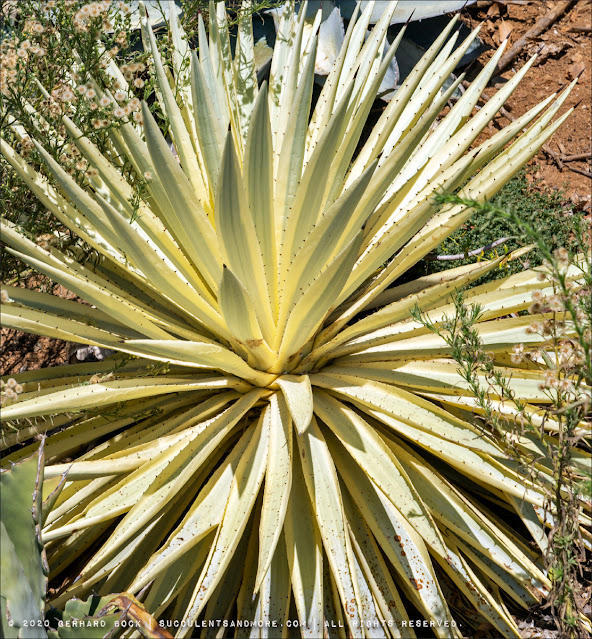 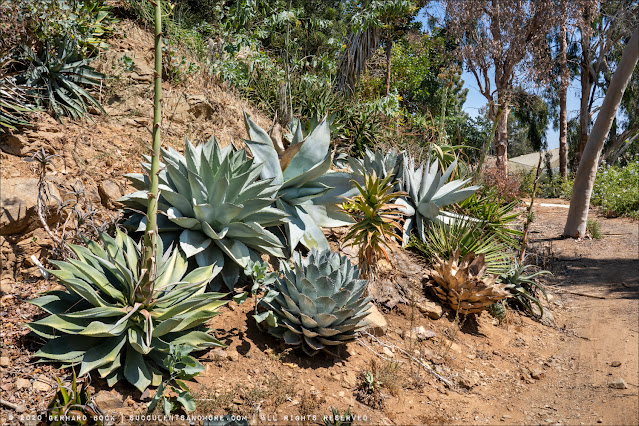 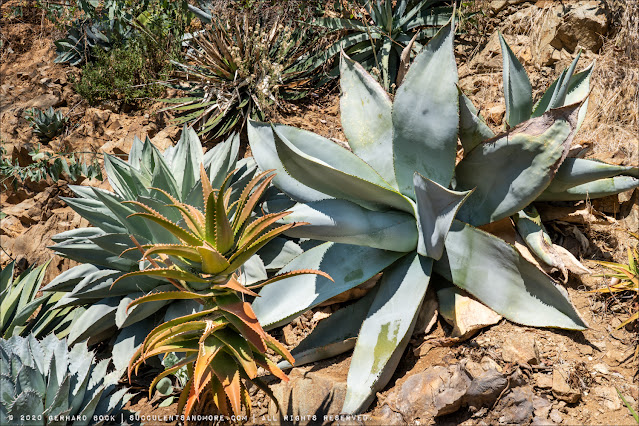 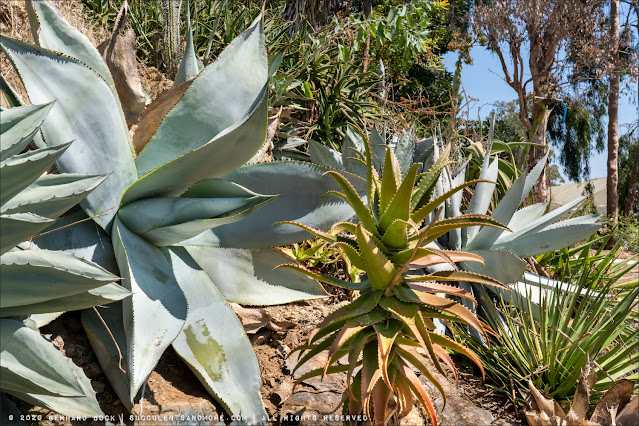 Miscellaneous photos taken while poking around in various greenhouses:

Just a few more outside before it was time to leave:

In the small display garden adjacent to the Public Sales Office:

While Rancho Soledad is primarily a wholesale nursery, retail customers are welcome. There's a lot to explore, even if you don't have a personal guide like I did. Location info and hours are on their website.
© Gerhard Bock, 2020. All rights reserved. No part of the materials available through www.succulentsandmore.com may be copied, photocopied, reproduced, translated or reduced to any electronic medium or machine-readable form, in whole or in part, without prior written consent of Gerhard Bock. Any other reproduction in any form without the permission of Gerhard Bock is prohibited. All materials contained on this site are protected by United States and international copyright law and may not be reproduced, distributed, transmitted, displayed, published or broadcast without the prior written permission of Gerhard Bock. If you are reading this post on a website other than www.succulentsandmore.com, please be advised that that site is using my content without my permission. Any unauthorized use will be reported.
agaves aloes cycads nurseries San Diego Southern California
Location: 18539 Aliso Canyon Rd, Rancho Santa Fe, CA 92091, USA