In our climate, fall is a great time for planting. Since our winters are mild, the soil never freezes and roots can continue to grow over the winter, albeit slowly.

Because of COVID-19, we've had far fewer in-person plant sales this fall, but I still managed to accumulate a stash of plants begging to be put in the ground. Here's a photographic record of what I've done in recent weeks.

The aloe on the right in the photo above and below is a new acquisition from Rancho Soledad Nursery. It's a hybrid between Aloe ferox and Aloe capitata. The flowers aren't open yet but I think the color will be a creamy yellow. The plant itself already has the beginnings of a trunk (inherited from the Aloe ferox parent).
⬐ The spot where I planted the Aloe ferox × capitata used to be home to an Aloe aculeata, which had all but disappeared behind the leaves of the Russellia equisetiformis in front of it. I dug up the Aloe aculeata and moved it 10 ft. to the right:
It's now between Aloe excelsa and Aloe marlothii, and behind Yucca 'Bright Star':
⬐ Three newly planted mangaves: ×Mangave 'Life on Mars' (top left), ×Mangave 'Black Magic' (below it), ×Mangave 'Sponge Paint' (bottom center). I also planted a Delosperma 'Granita Orange' between 'Black Magic' and 'Sponge Paint'. The agave at top center is Agave zebra, the aloe in the lower right Aloe conifera. 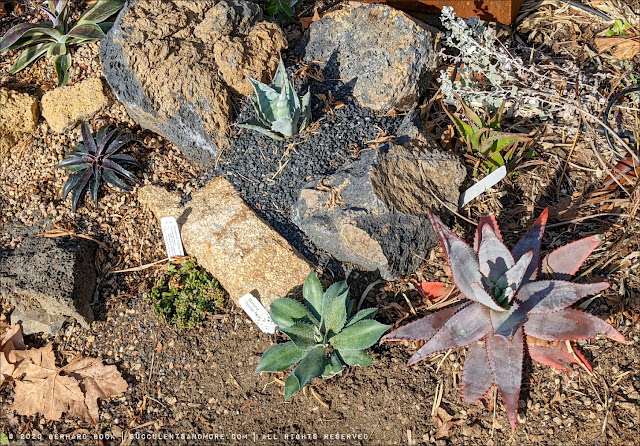 ⬐ This spot also has three new mangaves: ×Mangave 'Aztec King' (#1), ×Mangave 'Pineapple Punch' (#2), and ×Mangave 'Night Owl' (#3). The aloe is the recently transplanted Aloe marlothii × globuligemma.
⬐ A few changes at the base of the ponytail palms (Beaucarnea recurvata): Aloe 'AJR' (front) is now in the ground; it had been in a pot but had rooted through the drain hole. The aloe behind it is Aloe beetsilensis. To the right of the aloes, I planted a Sinocrassula yunnanensis that had been in too much shade; in full sun it will turn almost black. The other two are hardy mesembs: Cheiridopsis albirosea and Stomatium mustellinum (a night-blooming ice plant). 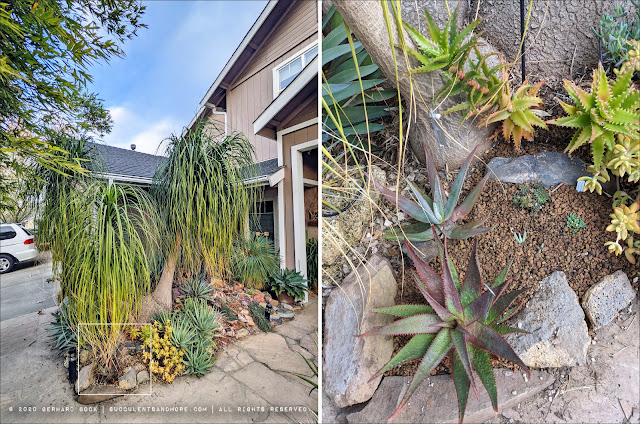 ⬐ Our garden is so small that every plant has to prove itself, i.e. please me enough so I want to keep it around. Unfortunately, the clock had run out on the Hechtia texensis in the photo below. It's just too straggly to deserve such a visible spot.
Hechtia texensis is now in a pot until I decide what to do with it, and its old spot is occupied by a new agave I brought home from Rancho Soledad Nursery, a hybrid between Agave potatorum and Agave gypsophila.
⬐ This red pot in the backyard had been home to Cordyline 'Electric Flash' for a couple of year. It had done well until this fall when it went downhill fast. I couldn't figure out why, considering I was watering it regularly. However, as soon as I began to remove it from the pot, I knew: Roots from the California bay tree (Umbellularia californica) next to it had found its way into the pot—even though the pot sits on a concrete paver!  The bay tree roots, a dense fibrous mat, had diverted most of the water away from the cordyline, causing it to the die of thirst. (To say that California bay trees have inquisitive roots would be an understatement.) 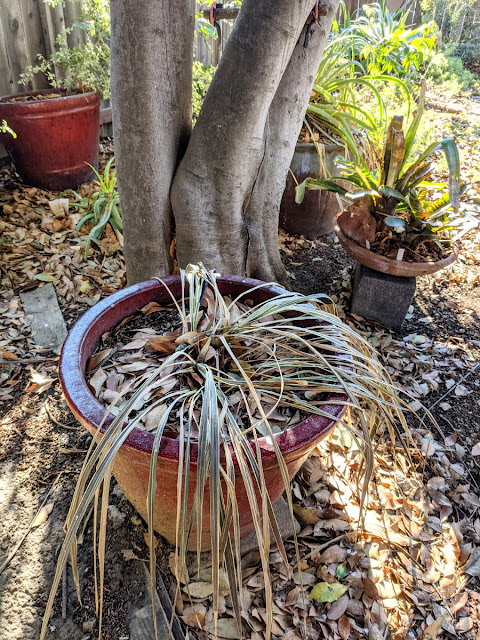 I elevated the pot a bit so now there's an air gap between it and the paver. And I replaced the cordyline with a ×Mangave 'Navajo Princess'. In contrast to mangaves with darker leaves, it doesn't need strong sunlight for best color.
I still have some more plants that really should go in the ground. Maybe the weekend after Christmas!
© Gerhard Bock, 2020. All rights reserved. No part of the materials available through www.succulentsandmore.com may be copied, photocopied, reproduced, translated or reduced to any electronic medium or machine-readable form, in whole or in part, without prior written consent of Gerhard Bock. Any other reproduction in any form without the permission of Gerhard Bock is prohibited. All materials contained on this site are protected by United States and international copyright law and may not be reproduced, distributed, transmitted, displayed, published or broadcast without the prior written permission of Gerhard Bock. If you are reading this post on a website other than www.succulentsandmore.com, please be advised that that site is using my content without my permission. Any unauthorized use will be reported.
agave aloe fall planting mangave new plants our garden
Location: Davis, Kalifornien, USA