- November 01, 2019
Gardens are anything but static. Plants grow, and grow—and then grow some more. Sometimes they end up outgrowing their spot, requiring us to make choices whether we like it or not. Here's a case in point, the bed near our front door: 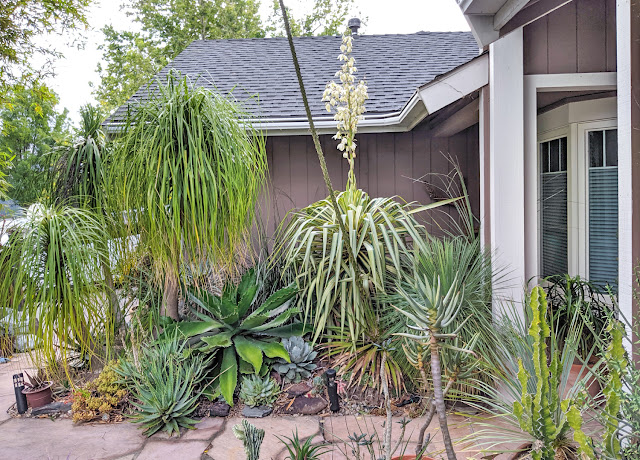 I wasn't exactly unhappy with how things looked, but the Agave schidigera in the front had flowered and was dying; the Yucca recurvifolia 'Margaritaville' in the back had bloomed for the first time and was likely going to sprout multiple heads, meaning it would get even bigger; and the Agave cupreata in the lower left was just a bit too ungainly for where it was. Beyond the Agave cupreata was a hybrid Hesperaloe (Hesperaloe parviflora × campanulata) from the UC Berkeley Botanical Garden; it had flowered only once in 9 years, taking up valuable real estate without giving us much payback. 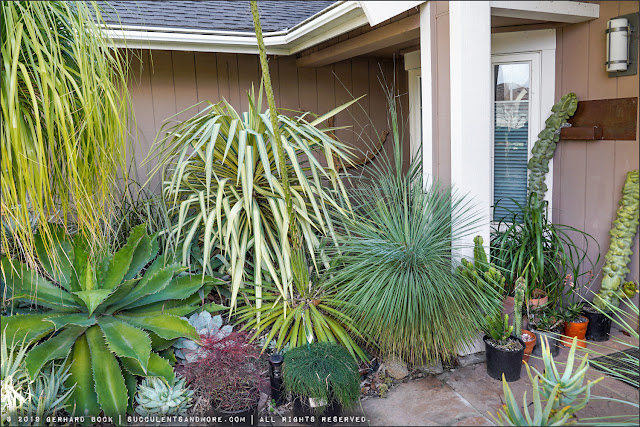 As summer merged into fall, it became clear that this bed needed an overhaul. Since it's right next to the front door, we see it all the time. As a result, what might be a minor niggle elsewhere became a persistent thorn in my side. And who wants to live with that when you don't have to?

Taking out the unwanted plants went much faster than I'd expected, thanks in no small part to my trusted Root Slayer. (If I were ever banished to a remote island and could only bring one tool, it would be a Root Slayer.) Here's the “after” photo: 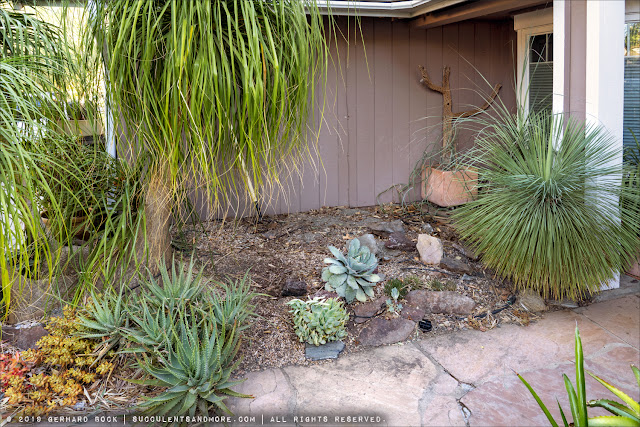 The three ponytail palms (Beaucarnea recurvata) are staying, as are the blue Agave guadalajarana 'Leon' and some of the smaller aloes along the front. 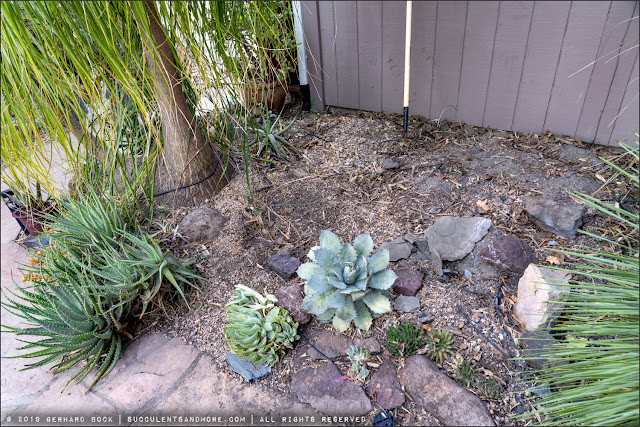 The potted Yucca linearifolia has stayed, too, it just got moved further away from the path. 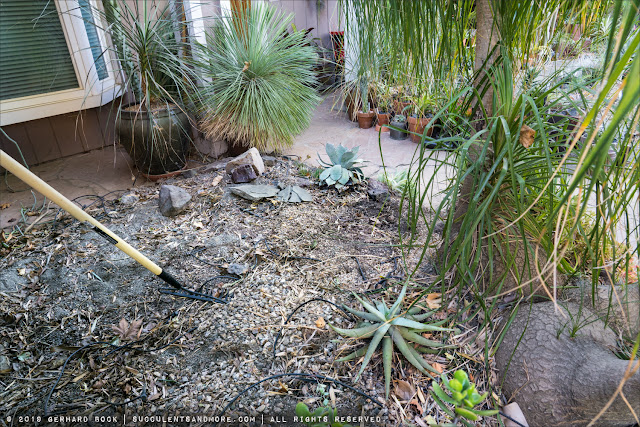 One major goal was to raise up the bed and add rocks. All it took was 1 cubic yard of top soil and 1,200 pounds of rock: 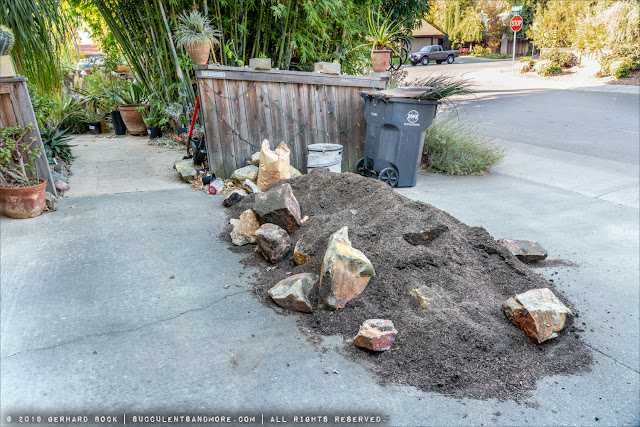 Quite a few rocks were hidden under the soil, 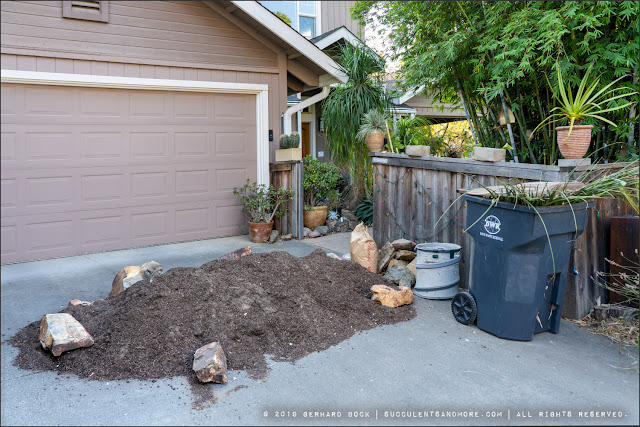 After a few hours of concerted soil and rock hauling, the bed looked much improved, even prior to planting: 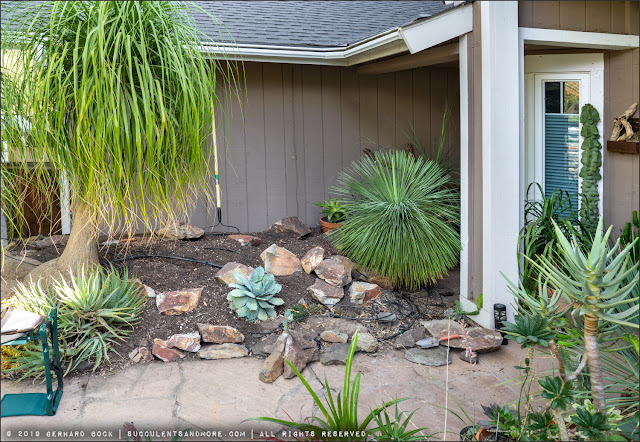 The next photo gives you a better idea of how much height we added. Even factoring in the inevitable compaction, the bed will remain at least a foot higher than it was before. 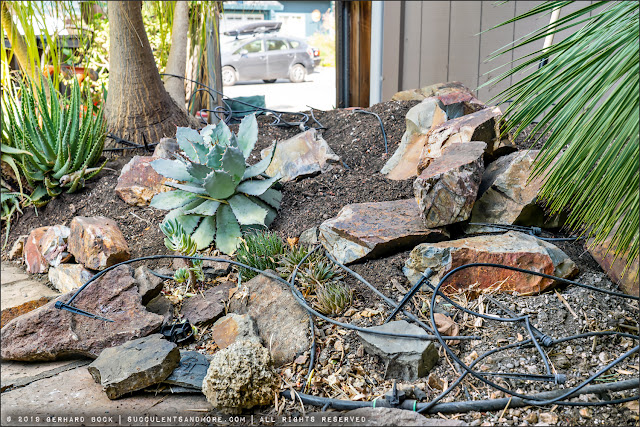 The Agave 'Red Margin' and the dudleyas you see at the bottom of the next photo had been there all along, but the plants behind the ponytail palms are new. 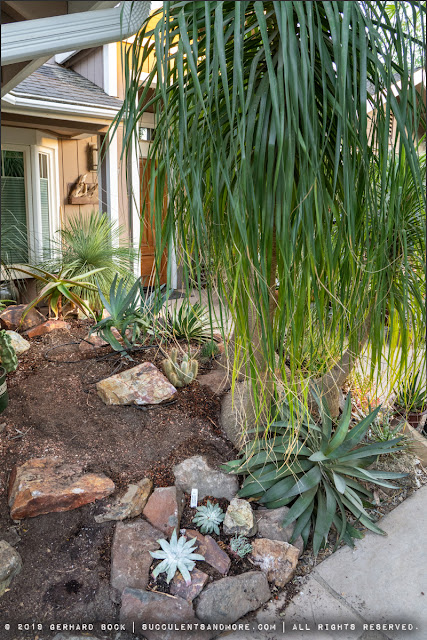 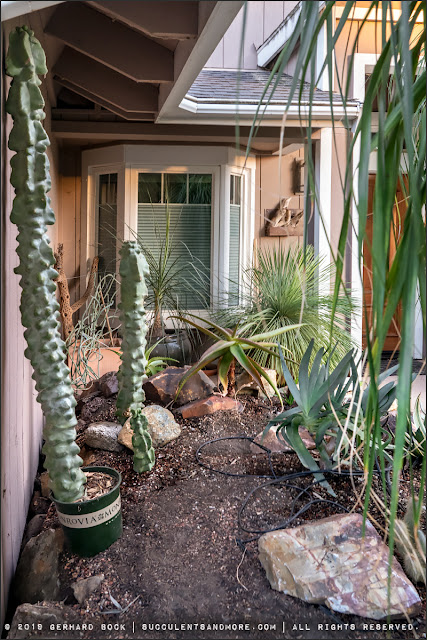 Next photo: In the 11 o'clock position is an Aloe vaombe I bought several years ago with the express intention of putting it in this spot. At the 2 o'clock position is a fan aloe (Kumara plicatilis) that had been languishing in a pot, and to the right of it an Agave 'Snow Glow'. And finally, at the 4 o'clock position, a Cleistocactus brookeae I brought home from the CSSA Show and Sale at the Huntington this summer. 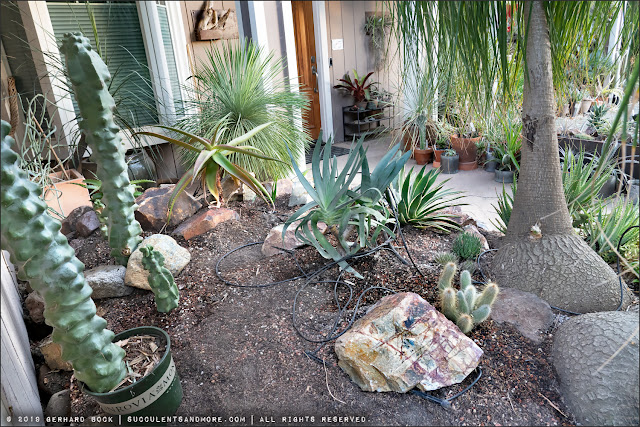 Here's a view from the front: 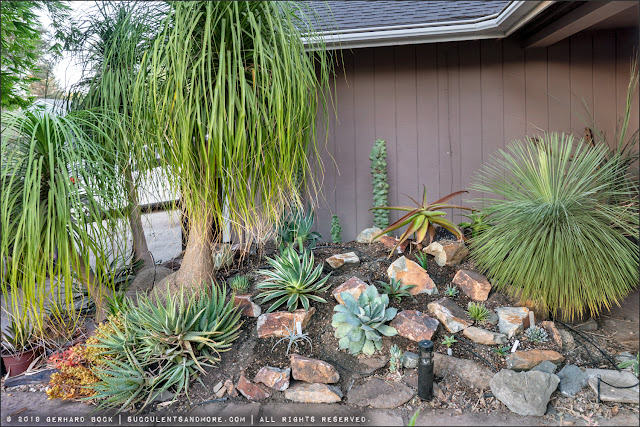 As you can see, I've added a bunch of plants towards front. Some will stay on the small side, others will fill in over the time. A little more work needs to be done in the back, but I'm not in a hurry now that the foundation has been laid.

New plants added to this bed:

I'll post plenty of updates as the plants mature.

On to the next project!


© Gerhard Bock, 2019. All rights reserved. No part of the materials available through www.succulentsandmore.com may be copied, photocopied, reproduced, translated or reduced to any electronic medium or machine-readable form, in whole or in part, without prior written consent of Gerhard Bock. Any other reproduction in any form without the permission of Gerhard Bock is prohibited. All materials contained on this site are protected by United States and international copyright law and may not be reproduced, distributed, transmitted, displayed, published or broadcast without the prior written permission of Gerhard Bock. If you are reading this post on a website other than www.succulentsandmore.com, please be advised that that site is using my content without my permission. Any unauthorized use will be reported.
current projects front yard makeover our garden renovation