- October 27, 2019
I joined the Bromeliad Society of San Francisco (BSSF) this summer, and the first garden I visited with them was that of Bay Area landscape designer David Feix. He's a big fan of bromeliads, succulents and tropical-looking plants, and his Berkeley garden reflects that.

As luck would have it, my second outing with the BSSF had a David Feix connection as well. The San Francisco Peninsula garden of BSSF members Marilyn and Peder was designed by David, and he's still very much involved in its maintenance.

According to David, the property is about ¾ acre (~30,000 square feet). The garden was started in 2015 immediately after Marilyn and Peder bought their new home. The only things remaining from the previous garden are the pool and the pool house as well as a few mature windmill palms (Trachycarpus fortunei) and giant birds of paradise (Strelitzia nicolai).

Originally, the garden was surrounded on two sides by a 30-foot Leyland cypress hedge. Not only did the cypresses make the space feel confined, they were also a major fire hazard, being so close to the house. The conifers were removed two years after Marilyn and Peder bought the property, and the resulting gaps were filled in with new shrubs and perennials.

Marilyn has been a member of both the Bromeliad Society of San Francisco and the San Francisco Succulent and Cactus Society for many years. She had a massive collection in their previous place, and many of the hardier plants made the move. In fact, the greenhouse, which you will see later, was the first project to be completed on the new property.


In case you're wondering why there are so few people in these photos: I did arrive early specifically so I could take people-free pictures. In addition, there was such a wonderful spread of food and drink laid out in the kitchen that it took people a while to tear themselves away and venture out into the garden. 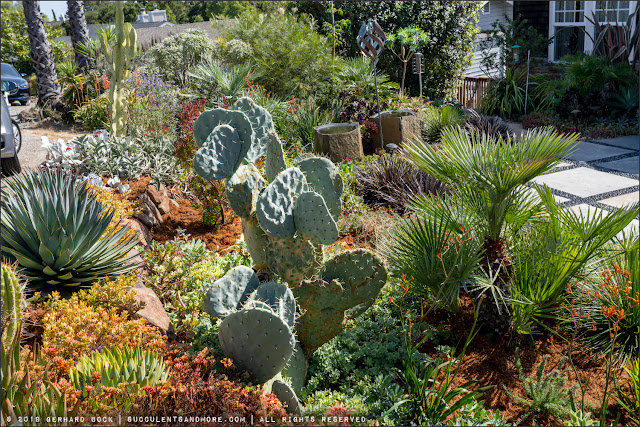 Side yard on the south side of the property, leading to the pool house (and the pool off to the right): 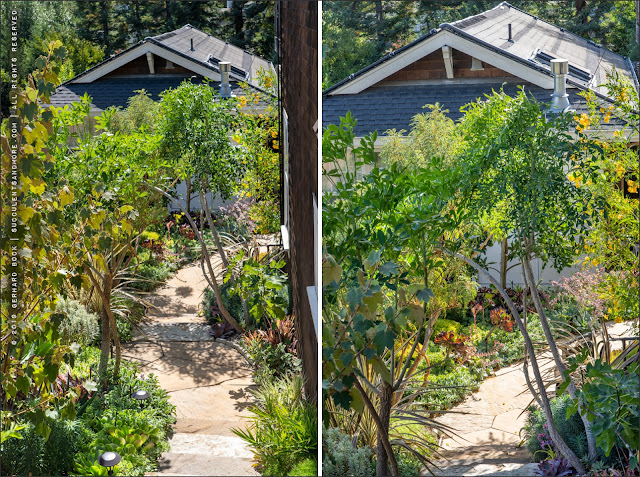 Now we're at the pool level of the garden: 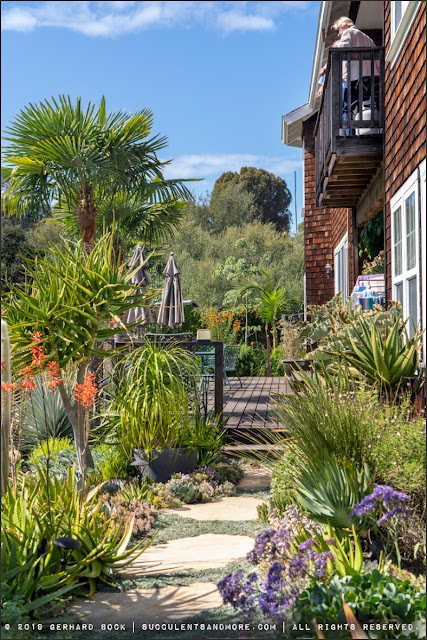 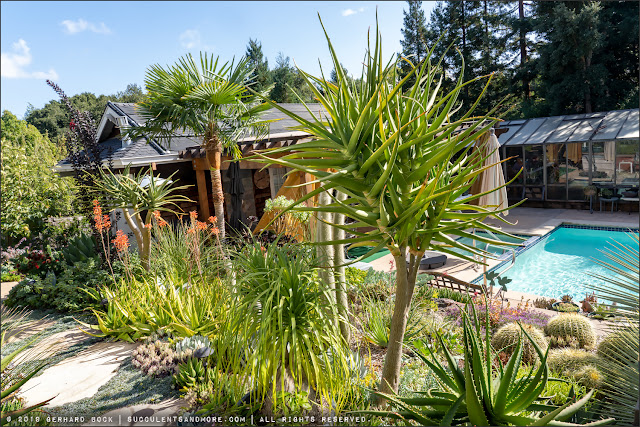 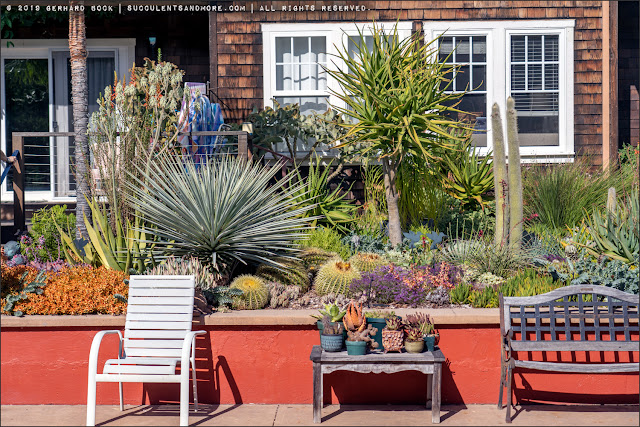 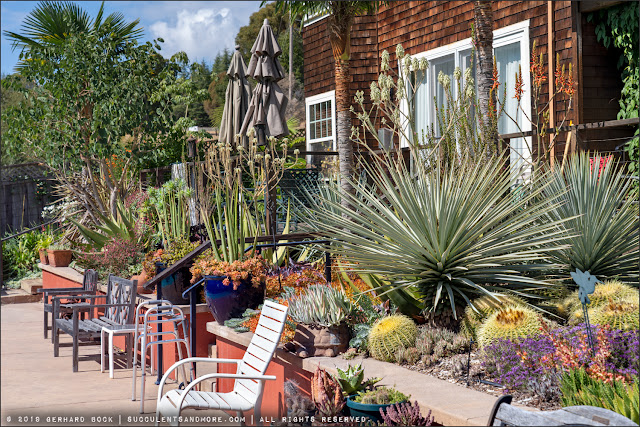 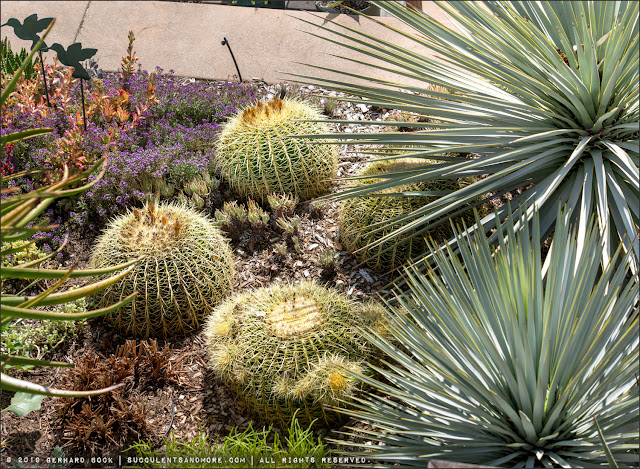 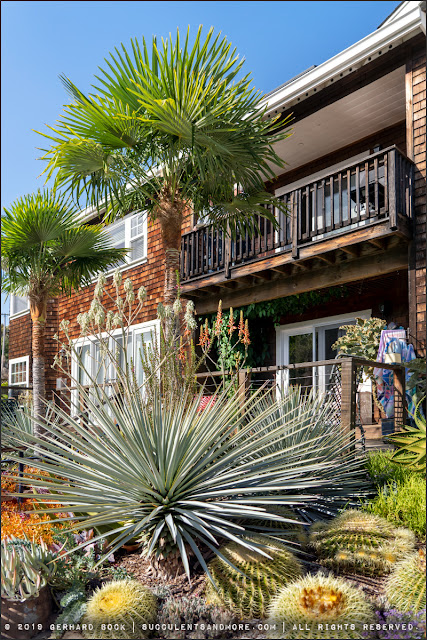 The next set of photos was taken from the balcony (see above) on the main level of the house, i.e. one level up from the pool: 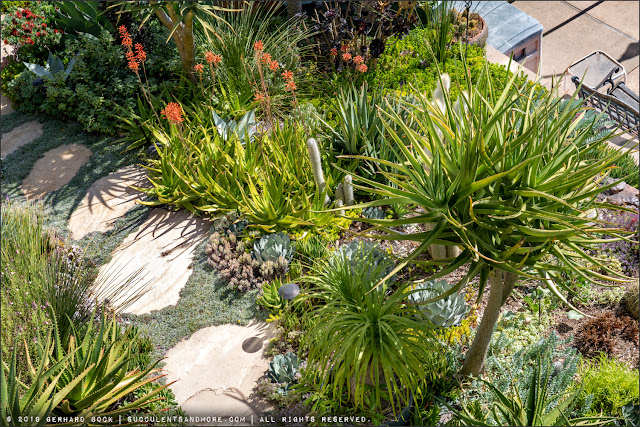 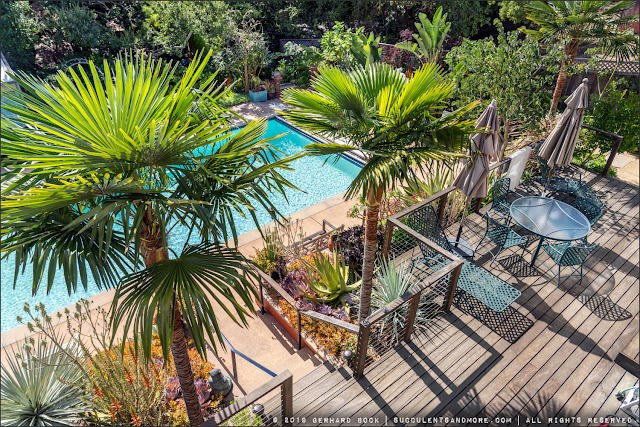 Back outside, continuing our exploration on the far side of the pool: 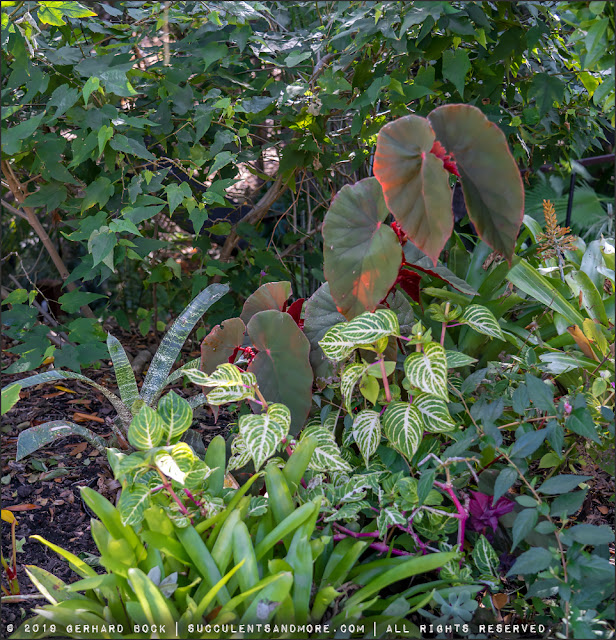 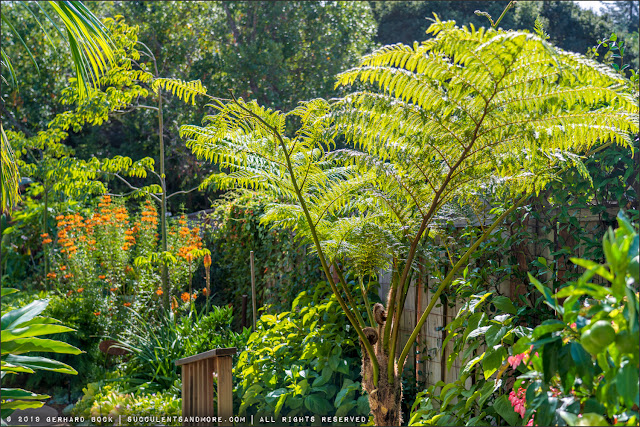 Back at the street level above the house:

I suspect being a landscape designer always involves a certain degree of tightrope walking, and sometimes you fall no matter how hard you try to stay balanced. But when your own vision for a space aligns seamlessly with the wishes of your clients, the result can be pure magic.

That kind of magic is on full display here.

I was able to spend some one-on-one time with David as he showed me around, and it was apparent that he has a deep personal connection with the garden and with Marilyn and Peder.  Being plant lovers and collectors, they are sophisticated clients. But by trusting David's experience and artistic eye, they have given him the freedom to create something so cohesive and harmonious that it's hard to imagine the space could possibly look any different.

© Gerhard Bock, 2019. All rights reserved. No part of the materials available through www.succulentsandmore.com may be copied, photocopied, reproduced, translated or reduced to any electronic medium or machine-readable form, in whole or in part, without prior written consent of Gerhard Bock. Any other reproduction in any form without the permission of Gerhard Bock is prohibited. All materials contained on this site are protected by United States and international copyright law and may not be reproduced, distributed, transmitted, displayed, published or broadcast without the prior written permission of Gerhard Bock. If you are reading this post on a website other than www.succulentsandmore.com, please be advised that that site is using my content without my permission. Any unauthorized use will be reported.
aloes Bay Area bromeliads David Feix exotic garden design landscape design landscaping private garden residential landscaping succulent tapestry succulents tropicalesque
Location: San Francisco Peninsula, California, USA