Some projects to liven up the dog days of summer

- July 24, 2019
With the exception of a few days above 100°F, we've had an unexpectedly pleasant summer. That has allowed me to get more done than I otherwise would have. No big projects—they'll have to wait until fall—but a few little ones with surprisingly big impact.

Nature abhors a vacuum, the saying goes, and that definitely applies to empty planters. The Corten container in the photo below had been sitting there for weeks, taking the place of a bloomed-out Verbascum bombyciferum 'Arctic Summer': 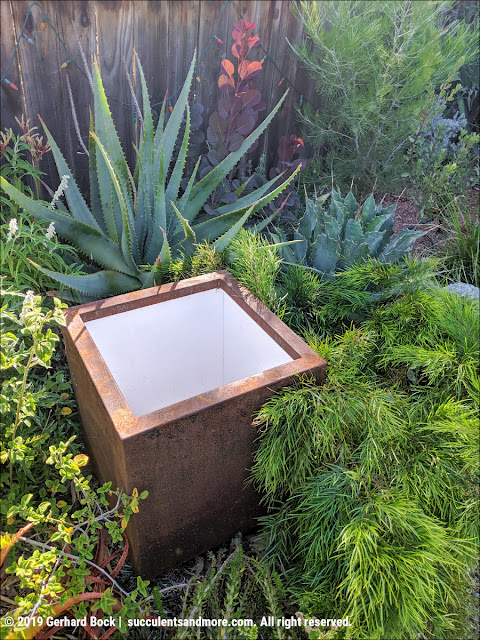 While the gaping maw of the Styrofoam-lined interior wasn't the most attractive sight, I wasn't in a big hurry either because I simply didn't know what to put there. Well, actually I did know: I wanted to put an Agave 'Mr Ripple' in there (I have a nice blue clone from Ron Parker). However, since the container is only 2 ft. from the public sidewalk, there was no way I could plant a massive agave so close to where people pass by.

My next thought was to plant a variegated version of 'Mr Ripple' from Hans Hansen/Walters Gardens called 'Ripple Effect' since it's supposed to be more compact, but my own 'Ripple Effect' is still in a 1-gallon pot and hence too small. Then I toyed with various other agaves and aloes, but eventually I settled on a Hans Hansen mangave called 'Mayan Queen' (a hybrid of Agave pablocarrilloi, Agave macroacantha and an unnamed manfreda ). It was bursting out of a 1-gallon can and needed a larger home anyway. I think it looks pretty dashing already and will only get better as it bulks up:

In a comment to my post “Public sidewalk obstructers beware!,” a reader suggested I use tomato cages to corral our firecracker plants (Russelia equisetiformis), which have a habit of flopping onto the sidewalk. Browsing on Amazon I came across something I thought might work even better, a “grow-through support.” It's basically a rectangular grid with four legs that get pushed into the ground. I'm trying it out on one of the russelias. The legs aren't very sturdy, but maybe it'll work out. 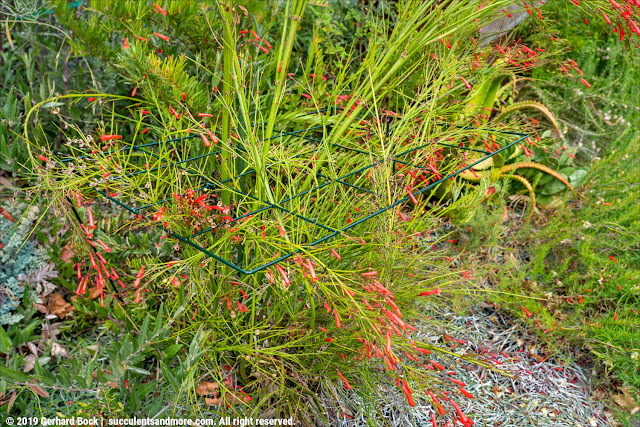 Nothing new in the next photo, but since I walk by this spot all the time and really like how it's come together, I thought I'd show it to you: 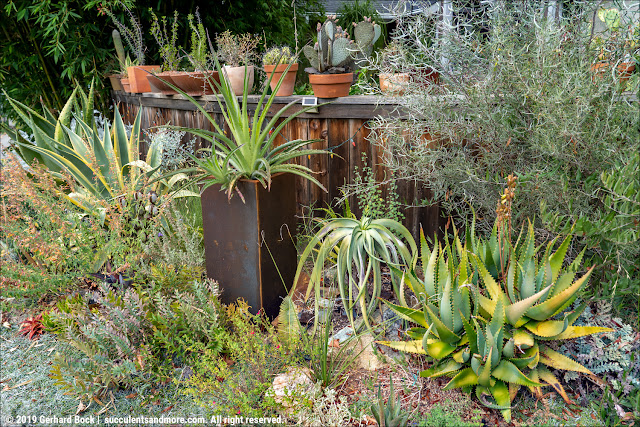 Inside the front yard fence, there are two Corten planters with Hans Hansen mangaves. One has done brilliantly since day 1, ×Mangave 'Mission to Mars':

The other, ×Mangave 'Silver Fox' (below), has struggled. Maybe “struggled” is the wrong word; it simply hasn't grown as fast as 'Mission to Mars'. In that hybrid (Agave shawii, Agave × pseudoferox, and a couple of manfredas), the manfreda genes are much stronger, contributing to its fast growth. 'Silver Fox' (Agave . pablocarrilloi, Agave macroacantha, and a nameless manfreda), on the other hand, seems to be taking more after its agave parents in terms of speed. As a result, it simply looked lost in its steel home—almost as sad as the poor shriveled echeverias:

Deciding there was no reason to stick with the status quo, I took out the ×Mangave 'Silver Fox' and echeverias and replaced them with a young Aloe pseudorubroviolacea and cuttings of a sedum whose label vanished a long time ago. They will fill the container quickly and become a much needed “presence” in this spot: 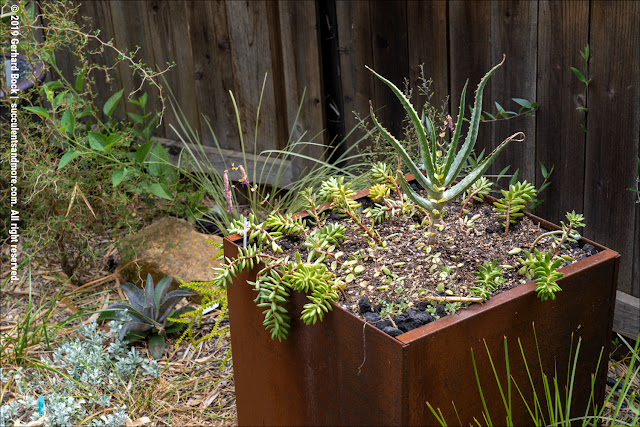 For perspective, here is Piece of Eden's Aloe pseudorubroviolacea in Southern California (the purplish-pink aloe on the right): 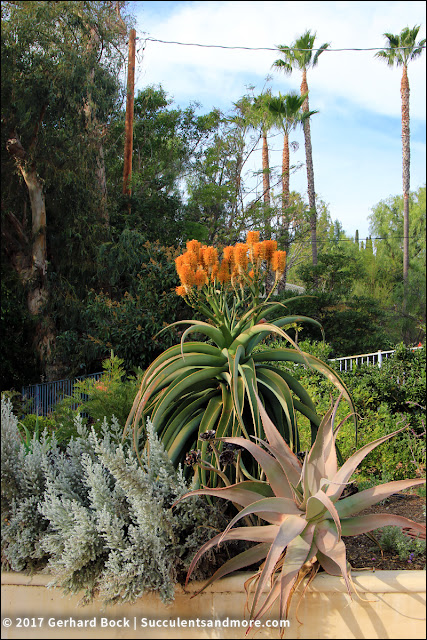 The bed along the far side of the driveway, between our property and our neighbor's, has had a few gaps since spring when I removed a few agaves that had rotted from excess rain, as well as an overgrown Aloe cryptopoda: 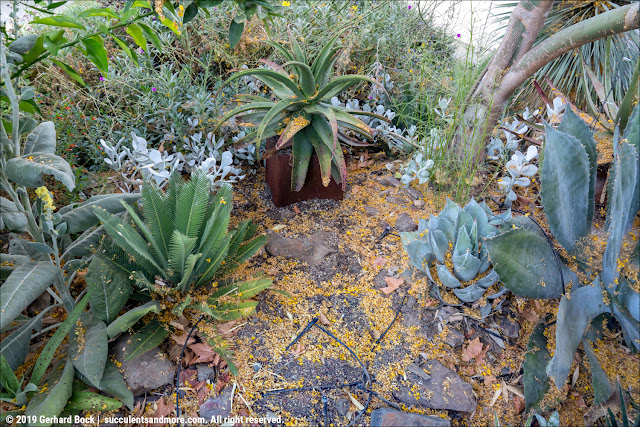 The only change I'd made earlier in the summer was to put the Aloe 'Mawii Gem' I'd brought home from San Diego last fall in a chimney flue liner painted with metal paint. On the weekend I added three agaves so now this spot looks less dreary:

Moving to the backyard, the flower spike on our Agave mitis 'Nova' was leaning so precariously that I decided to remove both it and the agave itself (it was slowly dying anyway): 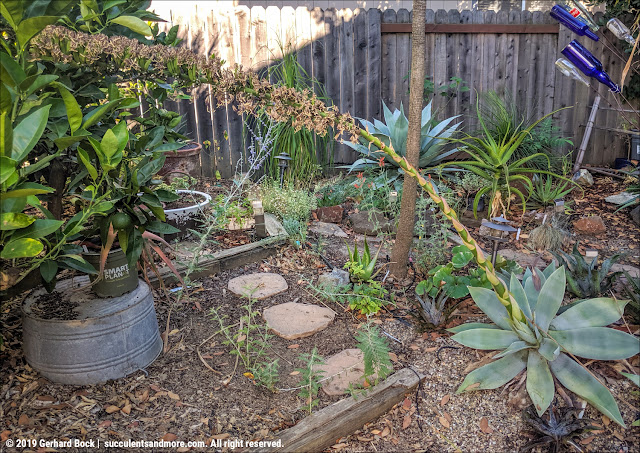 This is an area perennially “in progress” and it will see more changes in the future. But it already looks a bit better now that I've added more mangaves:


×Mangave 'Silver Fox' is the transplant from the Corten container in the front yard; Agave mitis 'Nova' is the sole offspring of the bloomed-out mother plant I removed:


I'm not quite ready to formally unveil the bottle tree (still waiting to find 8 more blue bottles) but here's a sneak peek (or two): 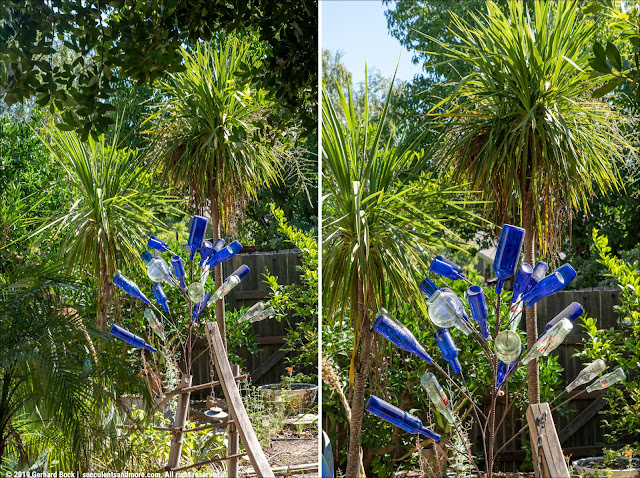 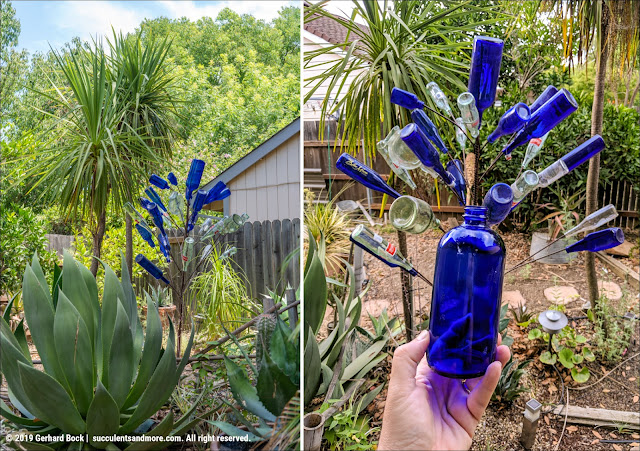 The blue bottle on the right is the most recent addition, a gift from our friend Judy. Daughter #1, who's been in Europe all summer, is bringing back a blue bottle from my sister-in-law. Patience, my dear Gerhard, patience!


© Gerhard Bock, 2019. All rights reserved. No part of the materials available through www.succulentsandmore.com may be copied, photocopied, reproduced, translated or reduced to any electronic medium or machine-readable form, in whole or in part, without prior written consent of Gerhard Bock. All materials contained on this site are protected by United States and international copyright law and may not be reproduced, distributed, transmitted, displayed, published or broadcast without the prior written permission of Gerhard Bock.

If you are reading this post on a website other than www.succulentsandmore.com, please be advised that that site is using my content without my permission. Please report such unlawful use to me at gerhard[AT]succulentsandmore[DOT]com. Thank you!
bottle tree containers CORTEN my garden projects
Location: Davis, CA, USA