- July 06, 2019
My previous post from the Huntington Botanical Gardens in Southern California bypassed the world-famous Desert Garden. In contrast, this post is about nothing else.

I've talked about the history of the Desert Garden in an earlier post, but here's a recap:

Established by businessman Henry Huntington in the early 1900s on what was originally a 600-acre ranch, the Huntington comprises a world-class library, art collections and 120 acres of gardens. Arguably the most famous is the 10-acre Desert Garden. It was started in 1907 when garden superintendent William Hertrich convinced Henry Huntington to plant cacti in an area where little else would grow. Huntington initially agreed to let Hertrich experiment on ½ acre. Hertrich went ahead at full steam, filling the ½ acre lot with 300 cactus. In 1908, Hertrich hauled three carloads of saguaros from Arizona, followed in 1912 by two carloads of cacti and other succulents from Mexico. Huntington was finally convinced and gave Hertrich another 4½ acres. In 1925, the Desert Garden grow by another five acres, and in 1981, long after Hertrich’s death, the final 5 acres were added. In 1985, the Desert Garden Conservatory opened to the public; it’s home to 3,000 succulents that either need some sort of protection or are simply too rare to leave outside.


Today, the Desert Garden has sixty planting beds filled with more than 2,000 species of succulents and desert plants from both the Old and the New World. While impressive-sounding, these stats are fairly meaningless until you see the garden’s splendor in person. We’re not just talking a lot of plants, we’re talking old plants, masses of them. It’s easy to see why the Desert Garden is considered one of the world’s premier collection of succulents.
On that note, let's go! 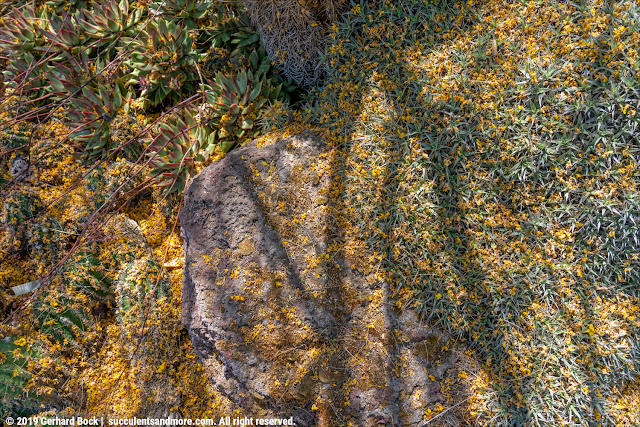 One more Huntington post to come: photos from the Cactus and Succulent Society of America's big show.