- May 30, 2019
In my recent rain in May post I showed you a number of hechtias in my garden. That, in turn, reminded me that I still hadn't written about my visit with Mr. Hechtia, Andy Siekkinen, at Rancho Santa Ana Botanic Garden last December—an oversight I'm remedying herewith.

Andy is currently doing PhD research at Claremont Graduate University's Department of Botany, which is housed at Rancho Santa Ana Botanic Garden. Andy's scientific focus is on the genus Hechtia; using next-generation DNA sequencing, he's examining the relationships between the various Hechtia species in order to reorganize the taxonomy of the genus from the ground up. His recent Master's thesis, Systematics of Hechtia (Hechtioideae): Insights in phylogenetics and plastome evolution in a non-model organism with Next Generation Sequencing, was the first major step in that direction.

While I have a rudimentary understanding of phylogenetics (the study of evolutionary relationships among organisms) and taxonomy (the science of classification), the finer points go right above my head. And that's OK with me. I'm no scientist, and my interest is fairly mundane: I simply want to know how plants are related. I like things to be structured and organized—a real challenge considering nature often prefers chaos and confusion over order. That's why I'm glad that there are bright minds like Andy who dig deep into the specifics and allow me to benefit from their research.


Andy had told me that he's able to use greenhouse space at Rancho Santa Ana Botanic Garden although the bulk of his collection is at his house in San Diego. In light of that, I expected to see a few dozen plants at most. Was I in for a surprise!
There were hundreds upon hundreds of bromeliads: epiphytic and terrestrial, species and hybrids. I'm not sure I'd ever seen so many bromeliads in one place before. Andy was very patient and answered my litany of questions: "What's this one?", "And that one?", "And the red one?", "And the silver one?", etc.

As much as I'd like to think that I was able to remember all the plant IDs from my visit, that's not the case. But being the nice guy that he is, Andy came to my rescue and filled in the blanks after the fact.

Having said that, I promise you'll be able to enjoy the photos below even without knowing a thing about phylogenetics and taxonomy! 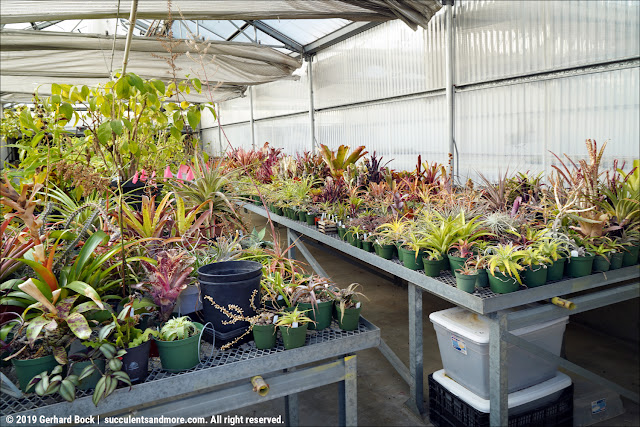 A quick refresher: The bromeliad family, Bromeliaceae, is found mainly in the subtropical and tropical regions of the Americas. They have adapted to life in environments as disparate as rainforests and deserts. Some are epiphytic (i.e. growing on other plants, usually trees), others are terrestrial (i.e. growing in the ground). Some have rosettes much like agaves, others have water-holding tanks formed by tightly overlapping leaves, and yet others resemble mosses or grasses. The range of shapes, sizes, colors and textures is enormous. 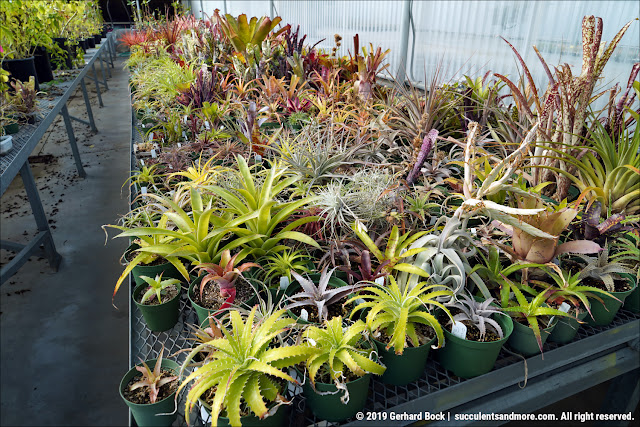 Hechtias are terrestrial bromeliads native to Mexico and Central America, with at least one (Hechtia texensis) also found in Texas. In terms of overall appearance, they're very similar to dyckias, which are endemic to arid regions of Brazil and central South America. In cultivation, if you treat them like agaves and cacti, you should be good. 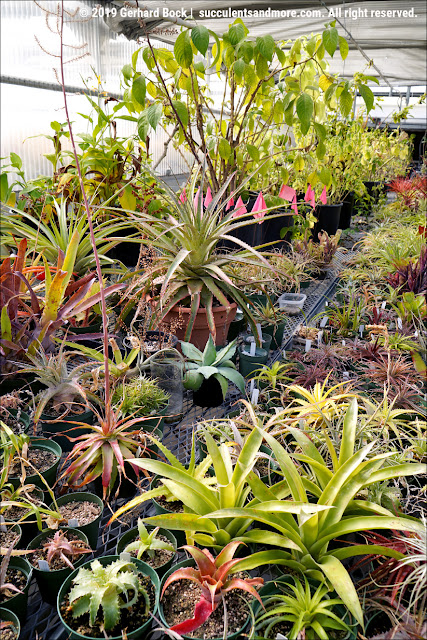 Other terrestrial bromeliads include the genera Puya, Deuterocohnia, Ananas (of which the common pineapple is a member), Bromelia, and Orthophytum, to name just a few. The Florida Council of Bromeliad Societies (FCBS) has a great bromeliad photo database covering genera from A (Acanthostachys) to Z (Zizkaea). 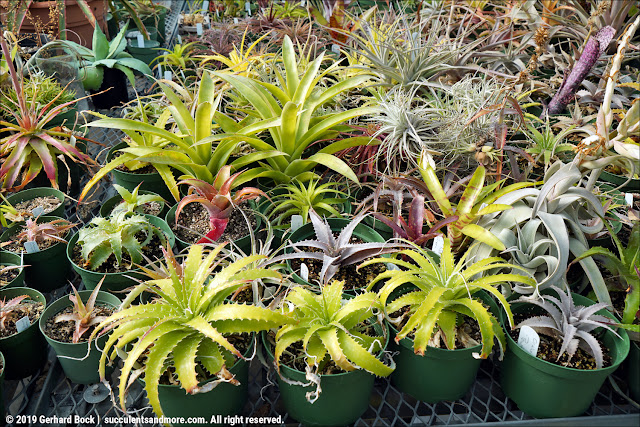 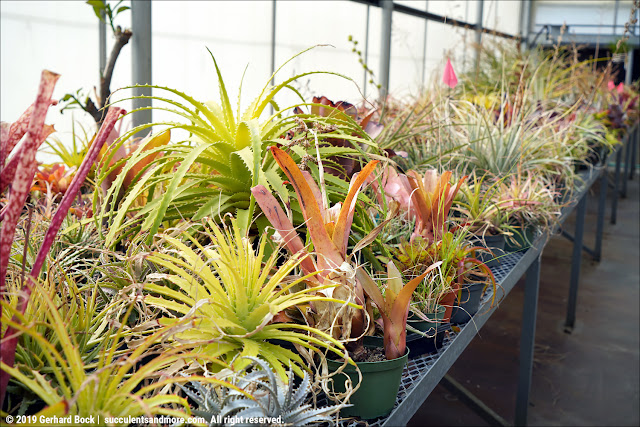 With the exception of tillandsias (aka air plants), which have become a staple in nurseries and garden centers, bromeliads are hard to find in regular nurseries. You might see a few terrestrial broms like dyckias in the succulent aisle, and a few epiphytes like aechmeas and guzmanias in the houseplant section. But if you want anything beyond that, you'll need to go the mail order route¹.

This also applies to hechtias. I continue to be baffled by the lack of hechtias in cultivation. People who like dyckias (and there are quite a few of them) should naturally be attracted to hechtias as well. One possible explanation is that hechtias are more difficult to propagate. Unlike many other bromeliads, hechtias are either male or female; you only get seeds if you have both a male and a female plant in flower at the same time (and of course a pollinator, even if it's you transferring pollen with a small brush). The mail order sources listed below are also your best bet for hechtias.

Andy Siekkinen is working on propagating more bromeliads for sale, including rare hechtias. Right now, he has several Ursulaea tuitensis specimens ready to go. (Scroll up a bit to see a photo of Ursulaea tuitensis; it's the last of the orange-red plants.) If you're interested, please contact Andy.

¹Here are three reputable mail order sources for bromeliads that I've personally used and been happy with:

If you are reading this post on a website other than www.succulentsandmore.com, please be advised that that site is using my content without my permission. Please report such unlawful use to me at gerhard[AT]succulentsandmore[DOT]com. Thank you!
Andy Siekkinen bromeliads dyckcohnia dyckia hechtia hybrid intergeneric hybrid terrestrial bromeliads
Location: Rancho Santa Ana Botanic Garden, 1500 N College Ave, Claremont, CA 91711, USA