Visiting Jo O'Connell, plant maven from down under

- March 15, 2019
As you may remember, I went on a quick road trip to Southern California right after Thanksgiving. One of the stops I was most looking forward to was Australian Native Plants nursery in Casitas Springs just outside of Ventura.

Few people in the U.S. know more about plants from down under than Australia-born horticulturist Jo O'Connell. She started the nursery in the early 1990s with her American husband Byron Cox and, through passion, dedication and perseverance, has developed it into a leading resource for plant material from the southern hemisphere. Much of the plants Jo and Byron offer are propagated by themselves, either from their own stock or from seeds imported from Australia. Literally, they are often the only source for a particular plant in the entire U.S. As you can see here, their plant list is truly impressive.

Jo O'Connell's personal story reads like a movie script—if Hollywood made movies about plant people, that is.
Jo was born and raised in Australia and received a Bachelor of Science degree in horticulture from the University of Western Sydney. She worked in the cut flower industry in the Blue Mountains of New South Wales and spent several years on revegetation projects in areas disturbed by mining in outback Queensland.

In 1992, real estate developer John Taft brought Jo to Southern California to establish an Australian garden on his 265-acre property outside of Ojai (less than 10 miles from where Jo lives now). During her stint at Taft Gardens, Jo met Byron, they fell in love, and they got married. After the two-year Taft project was over, Jo and Byron decided to start a nursery on the property in Casitas Springs that Byron already owned. In 2013, they bought the property next door—a junkyard with a crumbling 1920's house. This gave them additional space for the nursery (a total of three acres) as well as additional income after restoring the old house and turning it into a vacation rental.

Then disaster struck. On December 4, 2017, the Thomas Fire destroyed Jo and Byron's house but, miraculously, left the rental untouched. In the photo below you can see how close the two houses were: the rental (where Jo and Byron are living now) is behind the fence on the right, the main house was in the center of the photo where the puddles are now. Sometimes there's no rhyme or reason to how a fire spreads and how it behaves. 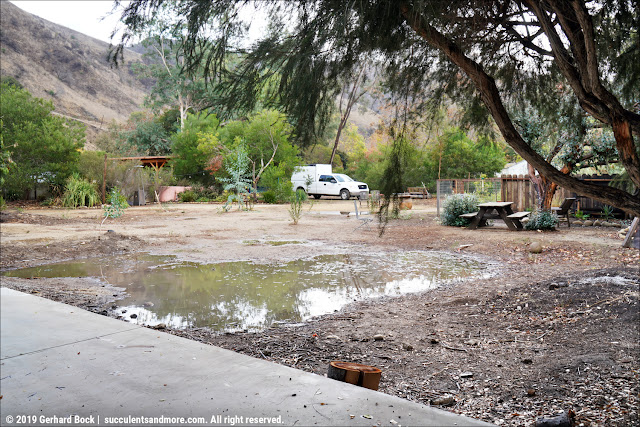 In addition to their home, Jo and Byron also lost their office which housed their collection of plant books and their extensive seed bank. Fortunately, most of their nursery plants were left untouched, which allowed them to quickly resume operation after the fire had been contained. When I visited, just about a year after the Thomas Fire, much of the burned vegetation had already started to grow back. The most prominent reminder was the bare ground where their house had been, but since my visit, construction has begun on the new house.

With optimism, determination and a can-do spirit clearly baked into their DNA, Jo and Byron are soldiering on, continuing to give us Australian and South African plants we wouldn't have in our gardens without them.

I had to pull over and take a photo when I saw this sign in Casitas Springs: 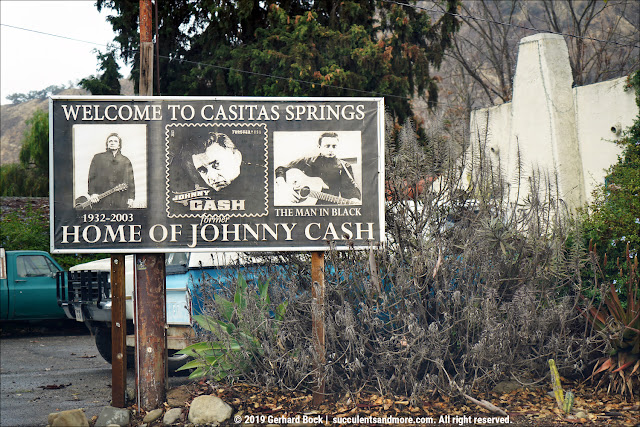 I had no idea that Johnny Cash had a connection to Casitas Springs. It turns out he and his family moved here in 1961 during one of the worst times of his life (as Wikipedia says, "the pills, the booze, the binges, the arrests"). Throw in constant touring and womanizing, and you can see why his wife filed for divorce in 1966. In 1968, Johnny Cash married June Carter and moved to Tennessee. His wife also remarried and moved to Ventura. The house at 8736 Nye Road is still there; I have no idea who owns it now.

But back to the real reason why I was in Casitas Springs. This small sign on North Ventura Avenue was the only indication that I had arrived at my destination: 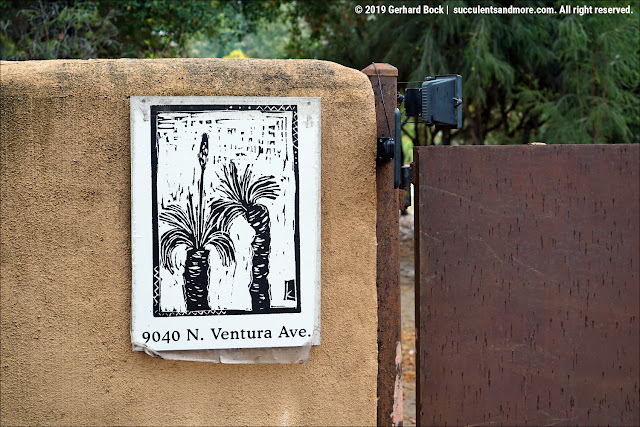 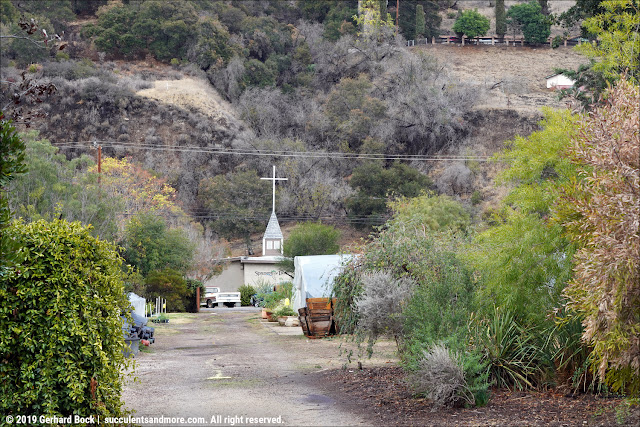 In the photo below, the church would be on the left, just outside the frame.

Yes, we're in the right place: 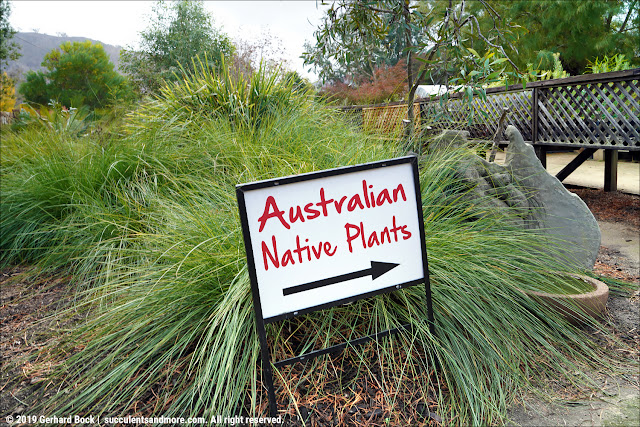 Australian Native Plants is a small specialty nursery with no regular opening hours. If you want to visit, contact Jo ahead of time to see when she's in. In exchange, you'll get her full attention as she leads you through the nursery and shares her encyclopedic knowledge of Australian plants and how to grow them in California. 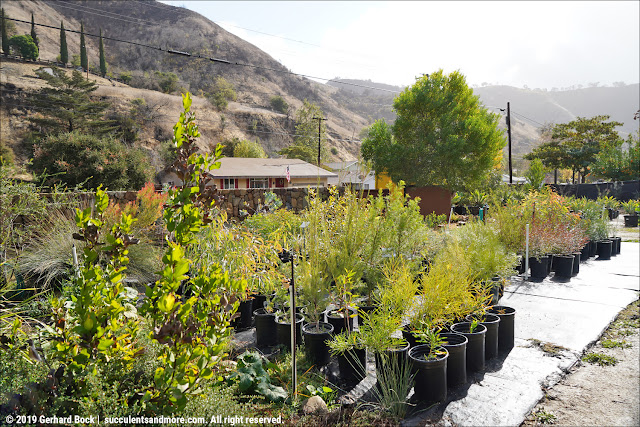 I was happy to find out that the climate of Casitas Springs is quite similar to ours, maybe even a bit colder in the winter, so anything they are able to grow there should do fine here in Davis. 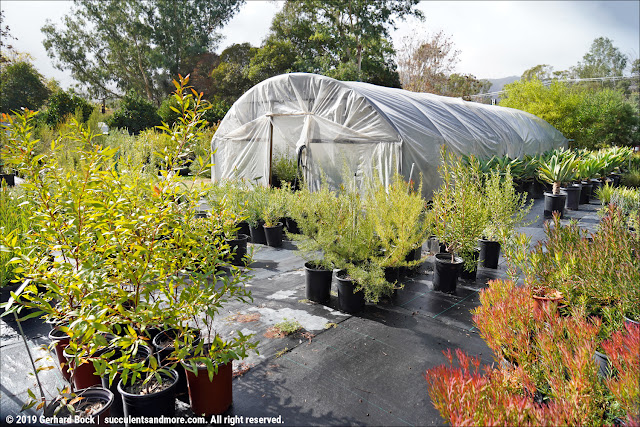 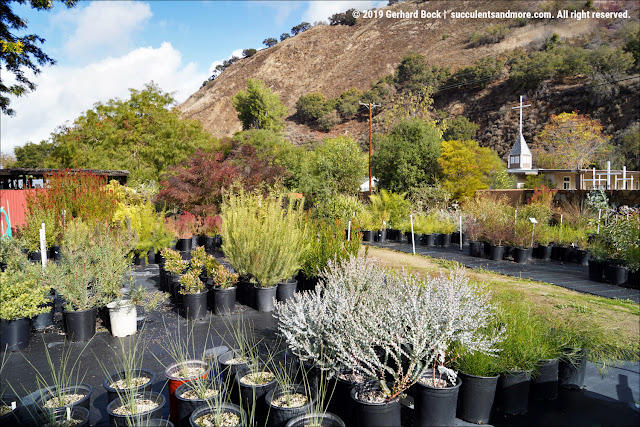 The plants are neatly organized but unless you are an expert, you really do need Jo's help because in the growing areas very little is labeled. 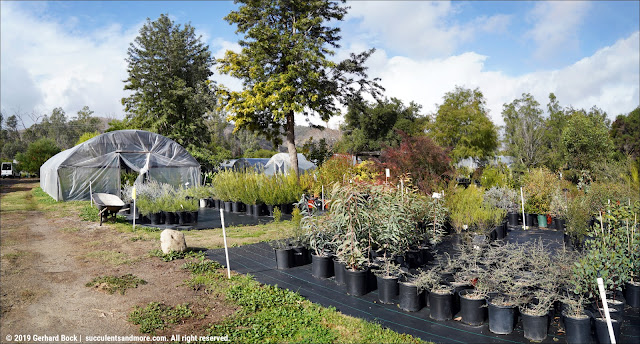 The Agave attenuata you see below were an unexpected surprise. It turned out that they belong to a friend, a landscaper, who is overwintering them at the nursery. 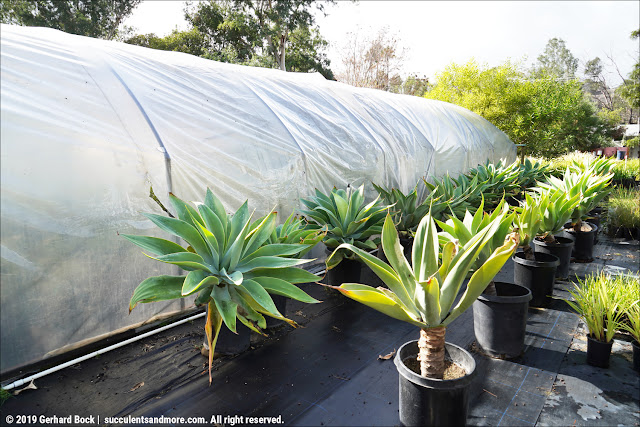 In addition to the outside areas, there are several hoop houses for plants that need a bit more protection. 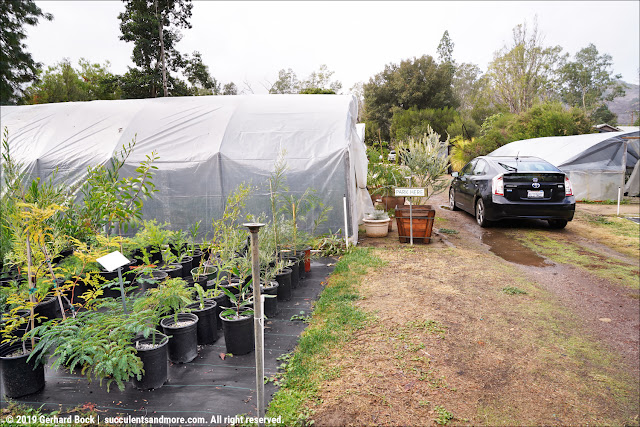 They're certainly all snug and cozy! 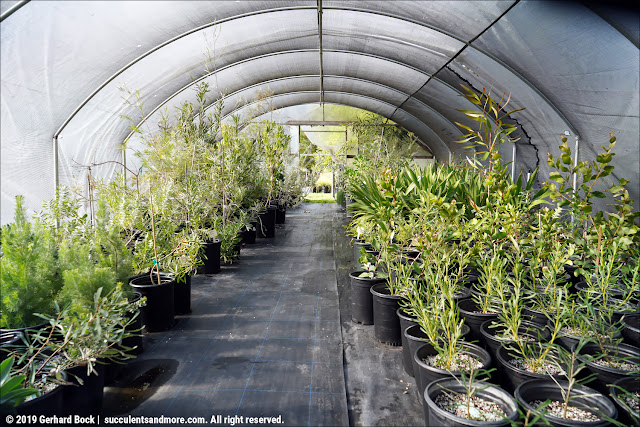 Jo is also carrying a line of simple, yet beautiful and very reasonably priced pottery. If I remember correctly, they're made in Egypt. 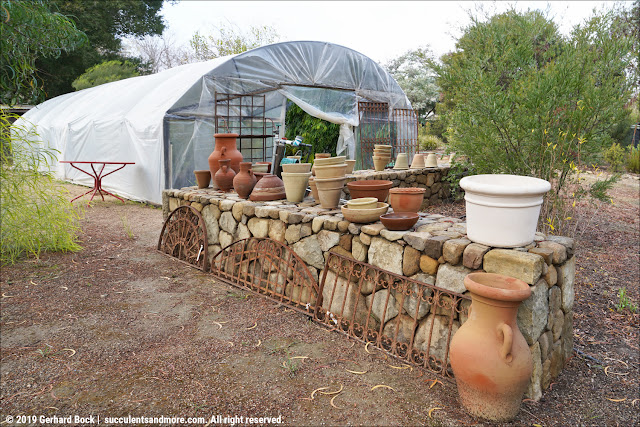 I brought home a few of the dun-colored pots. 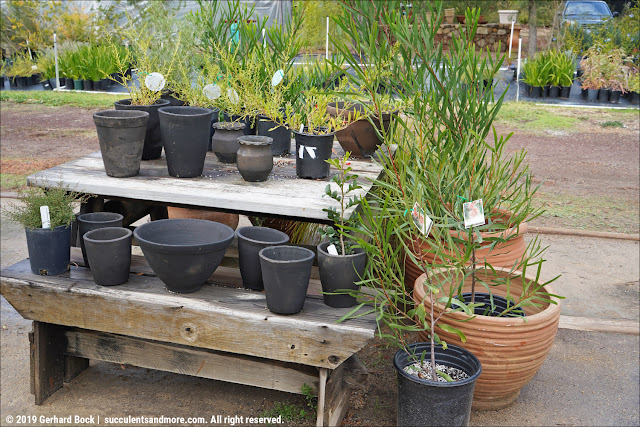 Now we're in the heart of the nursery—the retail area, if you will. The plants here are labeled and are ready to go. 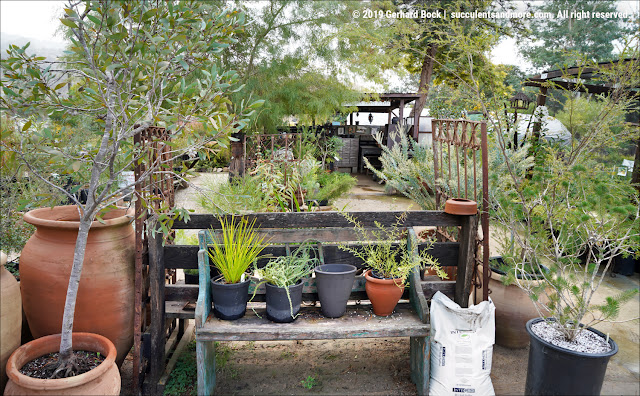 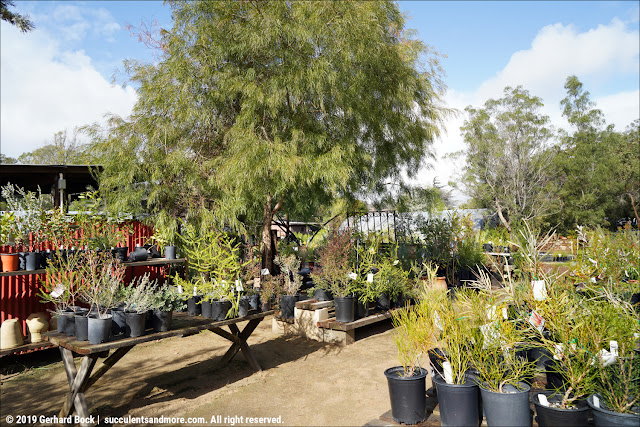 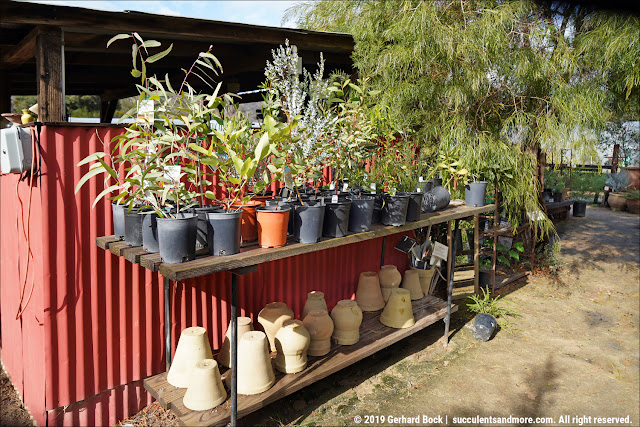 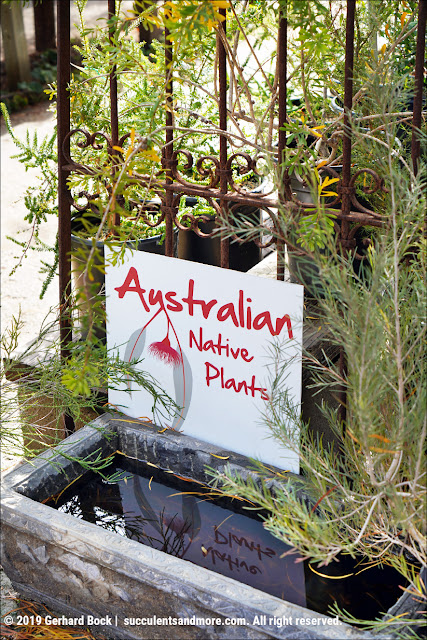 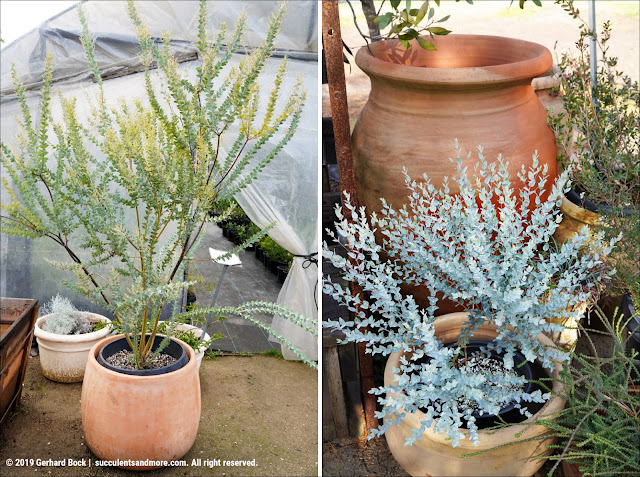 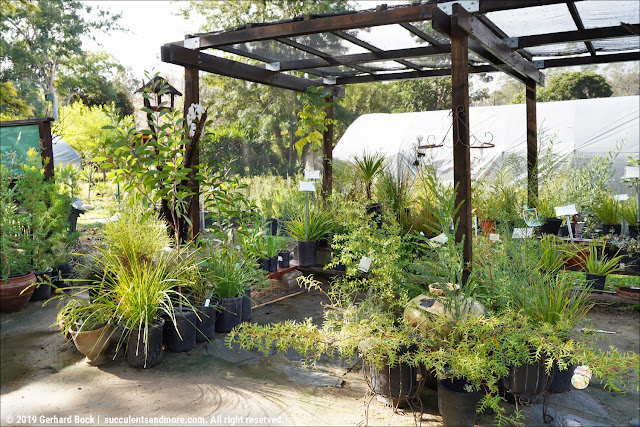 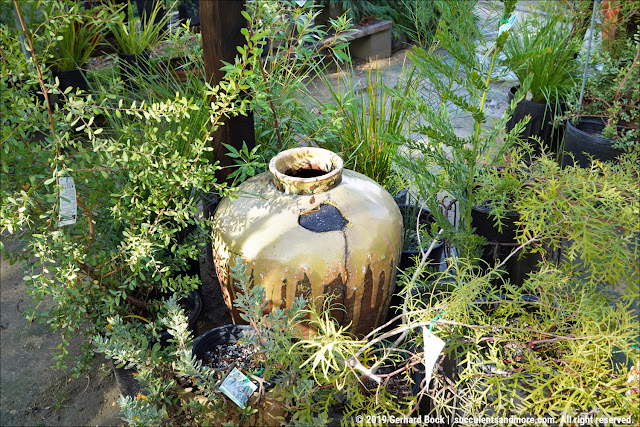 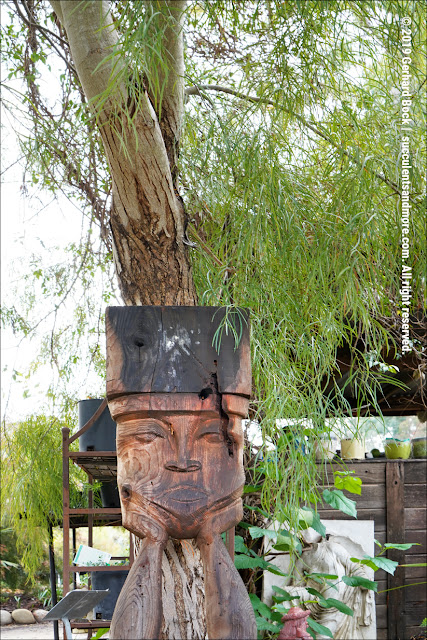 This is where your purchases are written up and tallied: 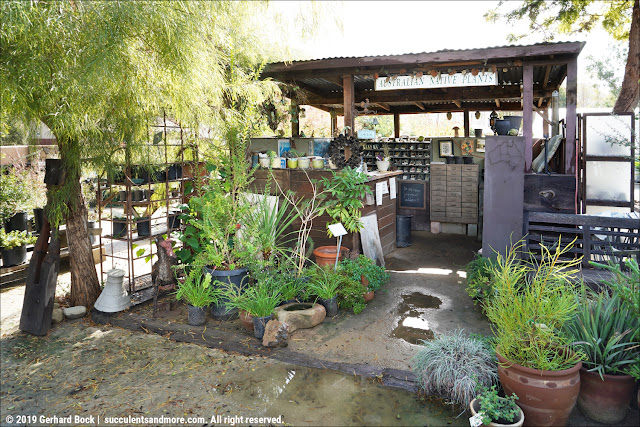 I loved the neatly organized plant labels. Jo said she orders them from Australia. 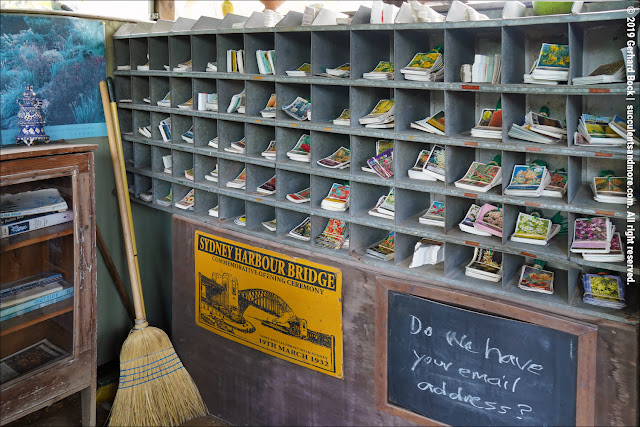 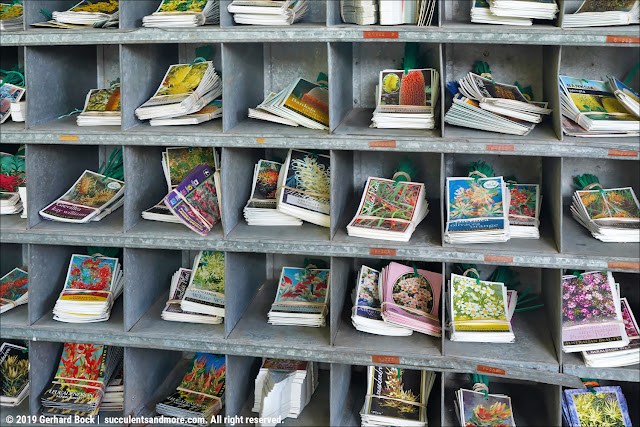 Nursery dog Wallaby was quite wary at first, proving that she's taking her job seriously, but she did warm up a bit and even let me pet her by the end. 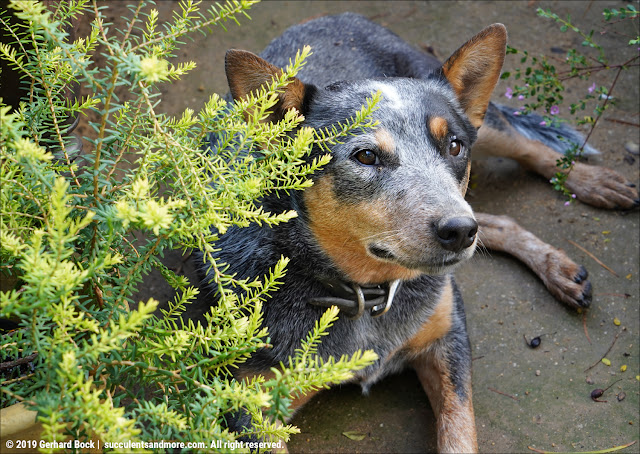 When Wallaby was a pup, she was hit by a car and almost died. Fortunately, she pulled through and seems perfectly healthy and happy now.

Here's the trunk of my Prius at the end of my visit: 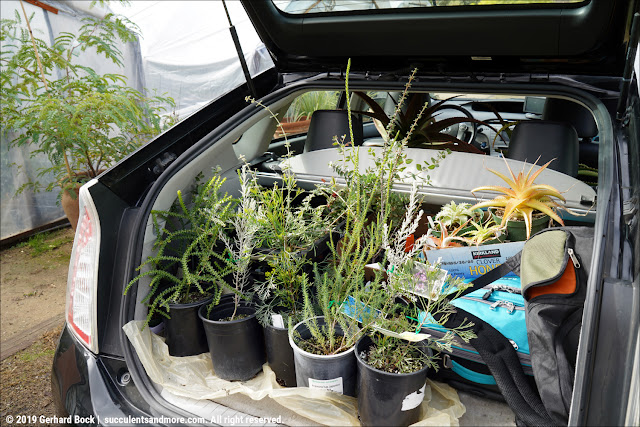 Some plants were for friends (including my Australian mate Troy McGregor whom Jo knows well). These are mine:
I spent a couple of hours at the nursery and could easily have stayed longer. I can't imagine ever running out of things to talk about with Jo. She's has a wealth of knowledge and decades of experience growing and tending to plants. In addition, she's one of those people who seem to instantly connect with others, making you feel like you've known her forever.

I can't wait to visit her again!

If you are reading this post on a website other than www.succulentsandmore.com, please be advised that that site is using my content without my permission. Please report such unlawful use to me at gerhard[AT]succulentsandmore[DOT]com. Thank you!
Australian Native Plants Australian plants dogs Jo O'Connell nurseries Southern California
Location: Casitas Springs, CA 93001, USA