Debris-collecting Agave macroacantha had to go

- January 26, 2019
Once upon a time, in March 2014 to be precise, I planted a beautiful Agave macroacantha outside the front yard fence, next to the 'Black Lace' elderberry and one of three Aloe 'Moonglow'.

When I say beautiful, this is what I mean:

Agave macroacantha offsets prolifically, eventually forming a clump with many rosettes. Nothing wrong with that, except that it seems to attract fallen leaves and debris like a giant magnet. The following photos are from this morning: 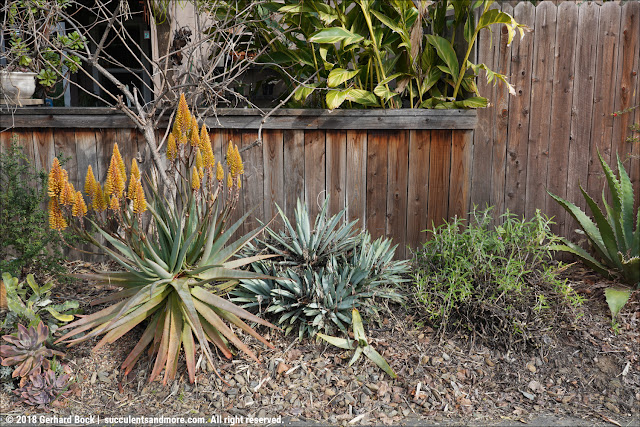 Since the leaves of Agave macroacantha are quite stiff and close together, I can't just reach in and pull out the debris. I do have tweezers long enough, but cleaning out a clump this size would take forever. Neither a shop vac nor a leaf blower nor a strong spray of water are all that effective. 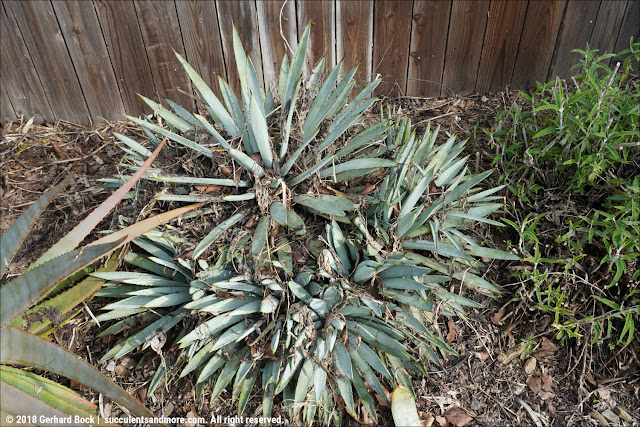 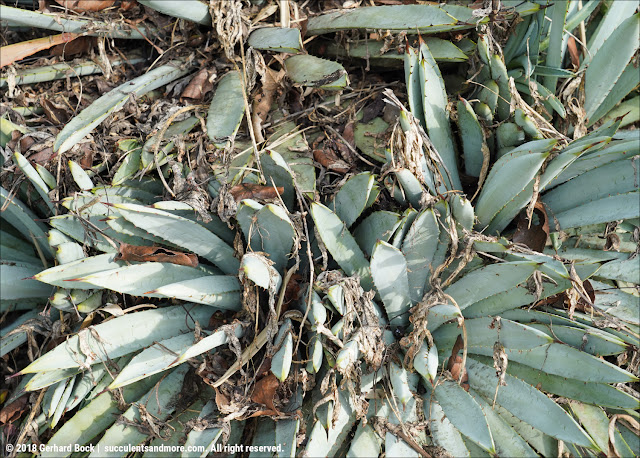 In fact, it's nasty. 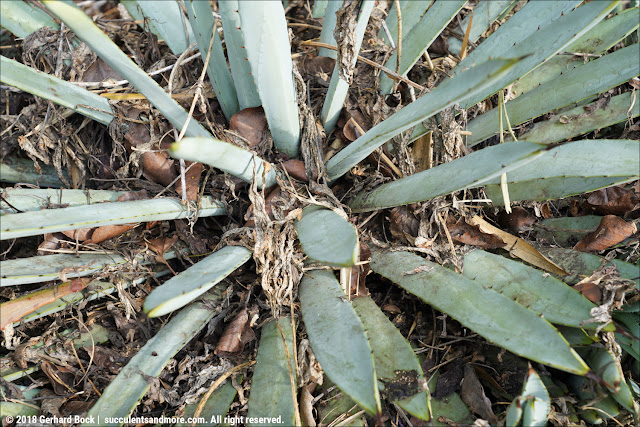 The only solution is to remove the clump and plant something that doesn't trap leaves.

And that's exactly what I finally did this morning. Since agaves have fairly shallow roots, it took less than five minutes to pop the clump out of the ground. 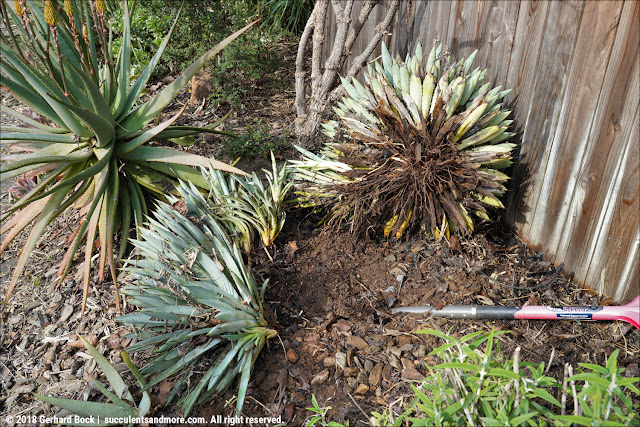 This is the bottom of the original plant you see in the second photo above: 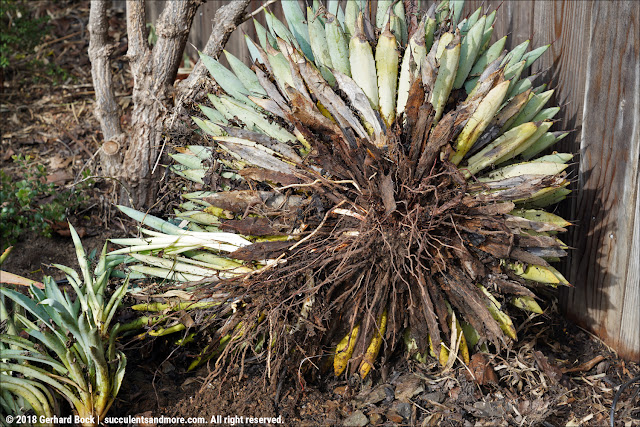 Look at all the crap in there: 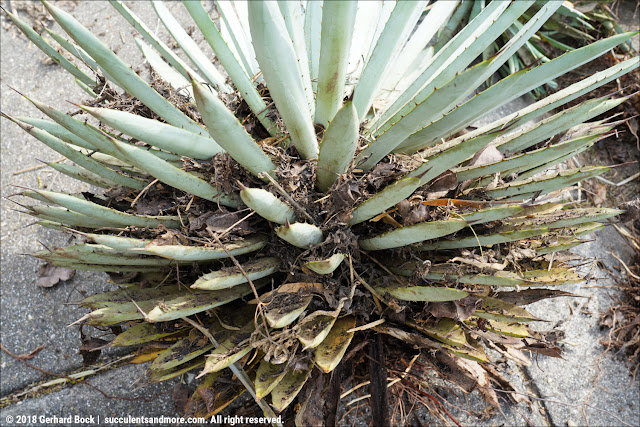 After separating the rosettes and the emerging pups, I ended up with this: 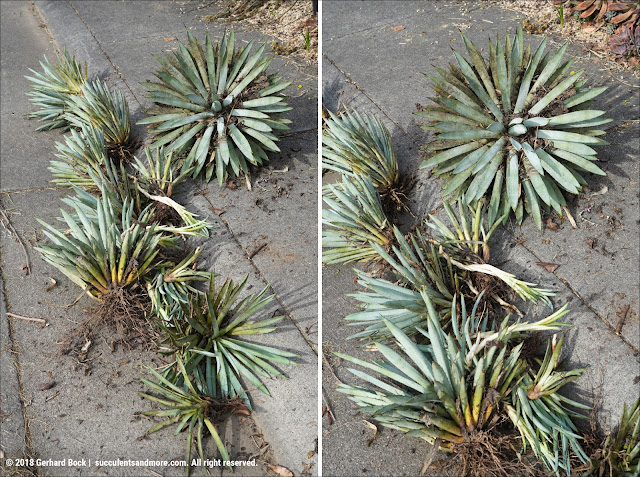 I'll take a bunch of offsets to the January meeting of the Sacramento Cactus & Succulent Society on Monday evening. The others will go on Freecycle. If you're in the Sacramento area and would like to have one, please leave a comment below. 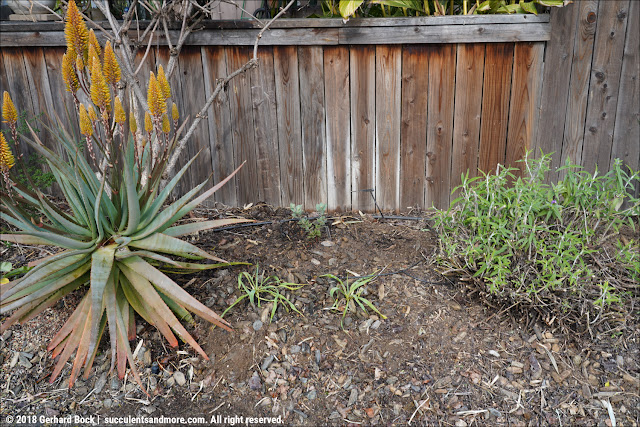 What did I plant?

Two Yucca cernua, aka Texas nodding yucca, a rare and endangered species from east Texas that wasn't formally described until 2003. And further back an Arctostaphylos auriculata, aka Mount Diablo manzanita. 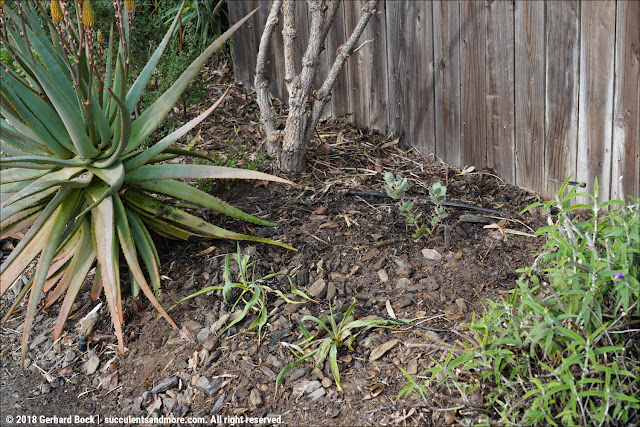 Arctostaphylos auriculata only grows on Mount Diablo in the East Bay, about an hour from here, so it's almost local. It's only known from about 20 occurrences and is considered endangered. It seems to be variable in size, with sources listing its mature height at anywhere from 4 to 12 ft. It's a beautiful shrub with gray-green clasped leaves, especially when in flower. A selection called 'Diablo Blush' is in the nursery trade now but it's still ridiculously hard to find. 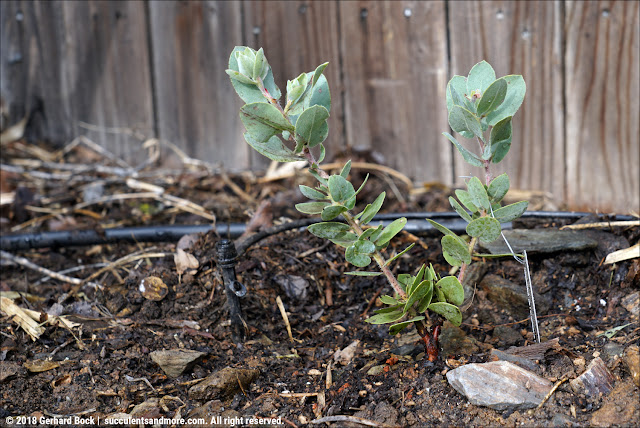 Like many manzanitas, especially pure species, Arctostaphylos auriculata doesn't tolerate much summer water. The placement of ours may seem ironic, considering it's right near a drip line, but after its first summer, I'll shut off the drip altogether.

Since there's quite a bit of bare soil right now, I'll add a low-growing groundcover as soon as I've figured out what I want. It has to be something that doesn't need much summer water.

This wasn't a big project, but since it's one I've been wanting to do for so long, I feel like I've really accomplished something today.

P.S. I have another Agave macroacantha, one of the first offsets I removed from big momma above, and it looks much better. It's planted at the base of Aloidendron 'Hercules' at a slight angle (leaning forward) so much less debris gets trapped between the leaves.


© Gerhard Bock, 2019. All rights reserved. No part of the materials available through www.succulentsandmore.com may be copied, photocopied, reproduced, translated or reduced to any electronic medium or machine-readable form, in whole or in part, without prior written consent of Gerhard Bock.  All materials contained on this site are protected by  United States and international copyright law and may not be reproduced, distributed, transmitted, displayed, published or broadcast without the prior written permission of Gerhard Bock.

If you are reading this post on a website other than www.succulentsandmore.com, please be advised that that site is using my content without my permission. Please report such unlawful use to me at gerhard[AT]succulentsandmore[DOT]com. Thank you!
agave arctostaphylos front yard
Location: Davis, CA, USA