Aloes getting ready to flower in our garden

- January 21, 2019
We had a couple of nights a degree or two below freezing in December, but it's been warmer than usual since then. Not that I'm complaining; I'd happily never experience frost again, at least not where I live. If this weather keeps up, it won't be long now before the aloes in the front yard will be in full bloom.

This Aloe wickensii (lumped by some in with Aloe cryptopoda) has a head start on the others. It has never looked this good before:

The flowers contrast beautifully against the greens and blues of the other succulents: 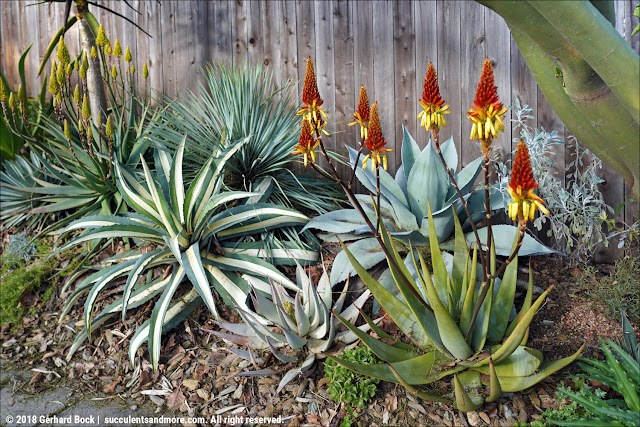 It's easy to like the bicolored flowers of Aloe wickensii. 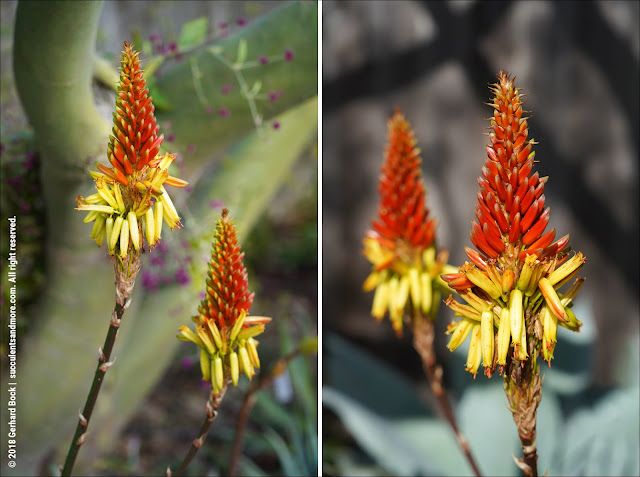 Moving on, Aloe 'Erik the Red' (to the right of the 'Sonoran Desert' palo verde in the photo below) is still a few weeks away from blooming; it's always the last one. Aloe 'Moonglow' clump #1 on the right is getting close; with more inflorescences than ever, it'll be a stunner. Between the two are Aloe vanbalenii, planted about a year ago, and a hybrid between Aloe marlothii (the Kwa Zulu form that used to be called Aloe spectabilis) and Aloe vaombe. I just planted it in November and it'll be many years before it's big enough to flower. 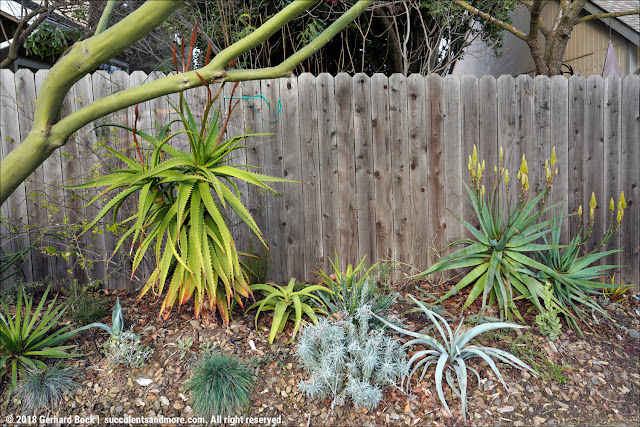 As you can see in the next photo, Aloe glauca is still going strong. It's been at it since before Christmas. Aloe capitata var. quartziticola to the left of it is taking its sweet time. 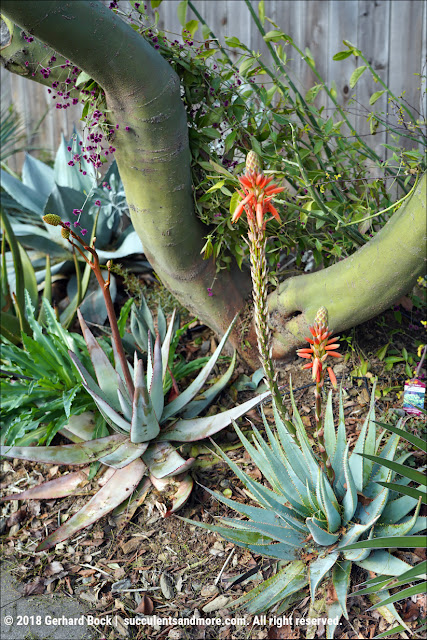 Aloe 'Moonglow' clump #2 next to Aloidendron 'Hercules' has more flower stalks that I care to count: 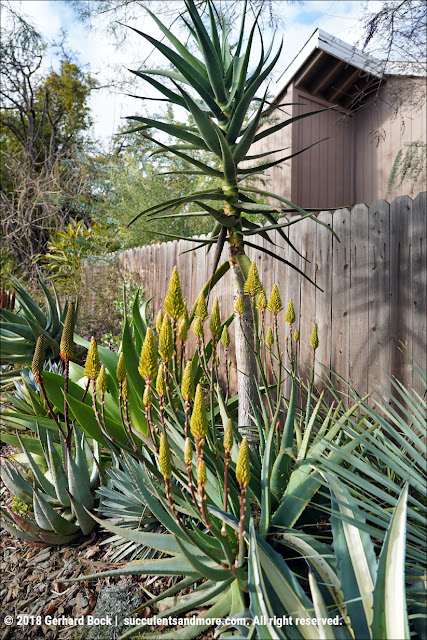 'Moonglow' will be great in another week or so. 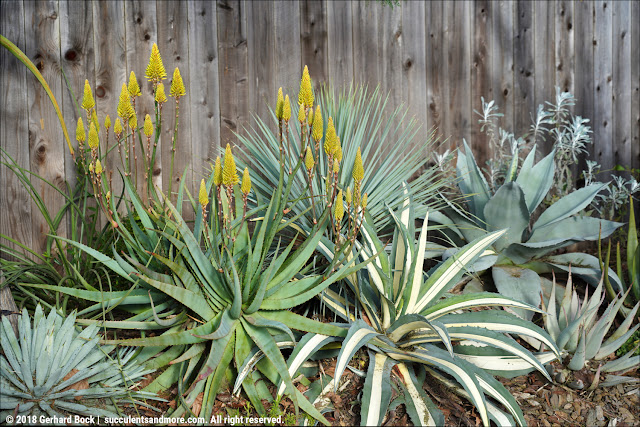 Aloe petricola, in the next photo to the left of 'Hercules', was the first to flower... 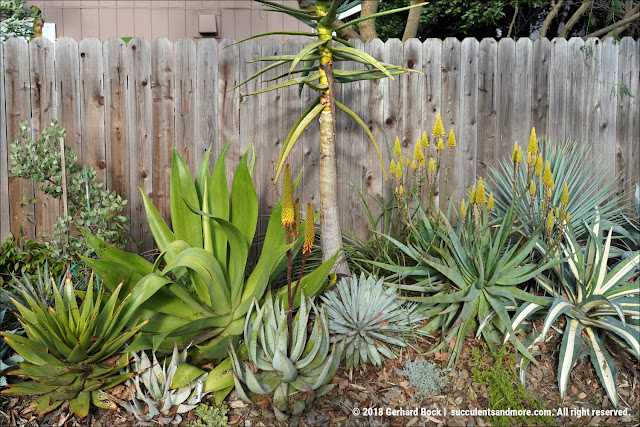 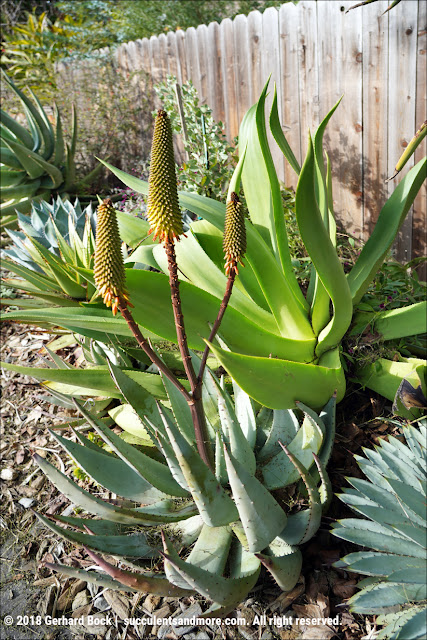 Aloe ferox is so heavy, it's leaning forward. As it develops more of a stem, I'll have to tether it so it doesn't fall on its face. It doesn't get irrigated directly but I'm sure its roots have traveled far and way to get water. 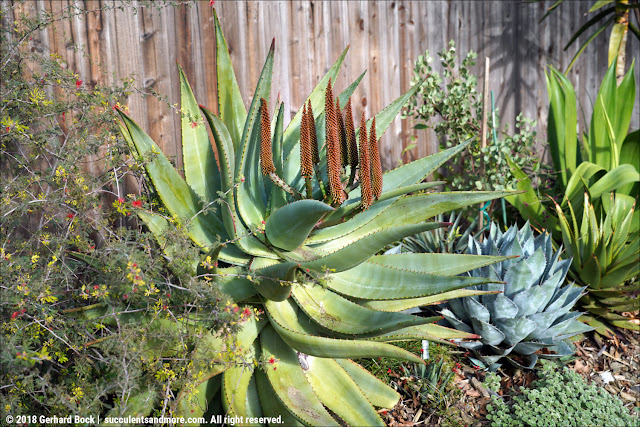 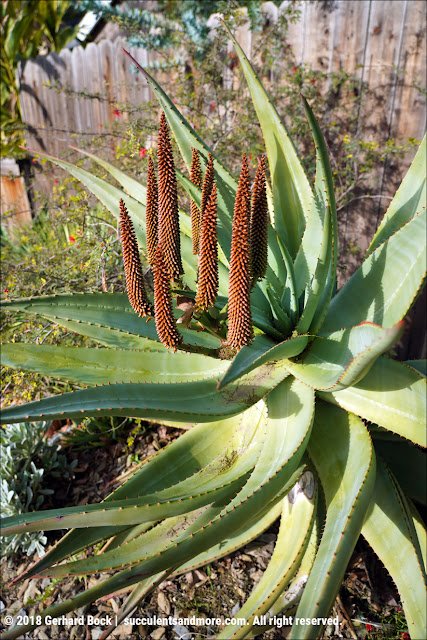 Aloe 'Moonglow' clump #3 looks like it has a couple of dozen flower stalks. It really is getting better and better and better. What's even more amazing: All of my 'Moonglow' came from a 5 gallon pot I split with a friend. In essence, I ended up with what was in half of a 5 gallon nursery container (the origin of clump #1); clumps #2 and 3 are offsets from the original clump. 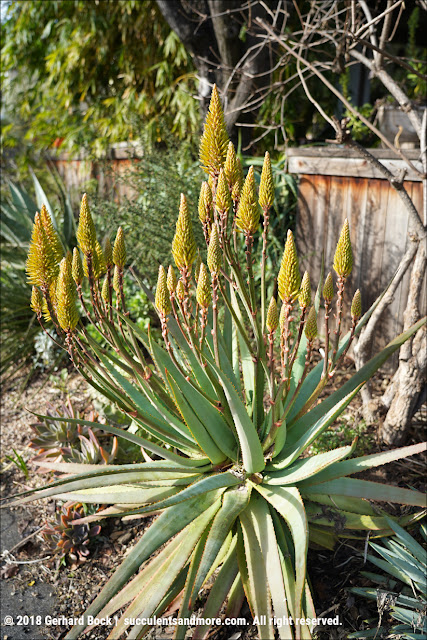 Aloe excelsa (next photo) flowered for the first time last year. This year's inflorescence is still small so there's no way to tell how substantial it will be. 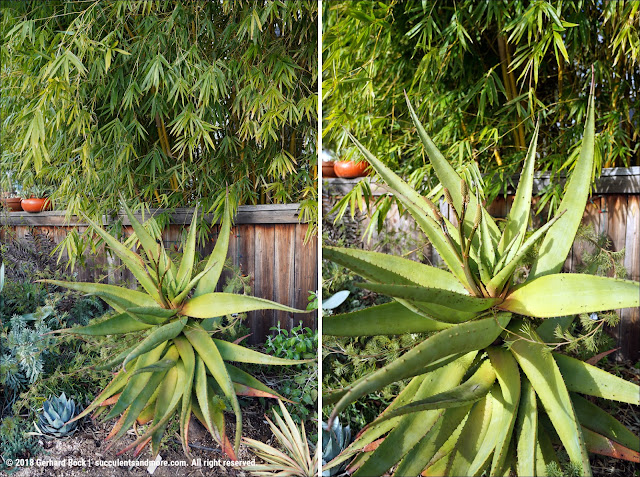 The last two aloes I want to show you are first-time bloomers this year.  First up is Aloe 'Tangerine'. Its parentage is a bit of a mystery according to the Huntington. It was found growing in a clump of Aloe ×principis, a natural hybrid of A. arborescens and A. ferox, and could be a color variant of it. 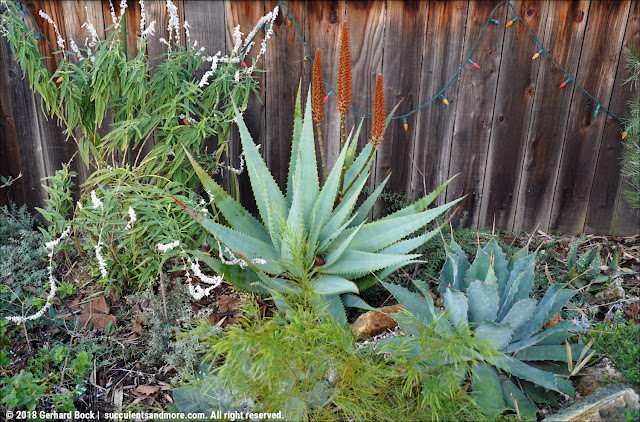 The last aloe is the Aloe marlothii in the photo below. It's the one I'm most excited about because I've been waiting for years for it to bloom. I bought it in a 3-gallon pot in September 2014, so I'd estimate its age to be about 7 years. I'll post more photos as the flowers develop. 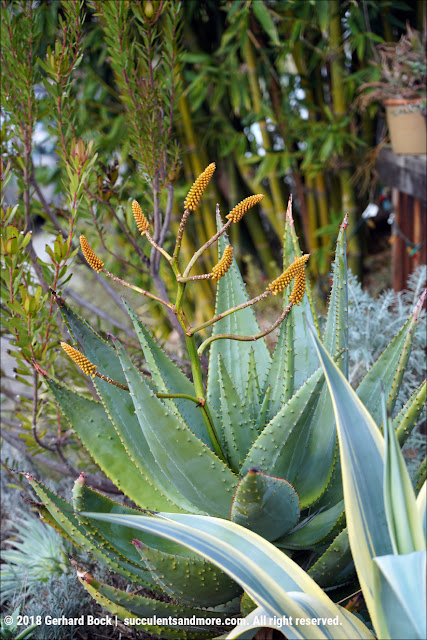 There are a couple of other aloes inside the front yard fence I'm keeping an eye on, including Aloe vaombe (I think I'm beginning to see the very beginning of a flower stalk) and the Aloe 'Mawii Gem' (Aloe mawii × globuligemma) I brought home from San Diego in November.

© Gerhard Bock, 2019. All rights reserved. No part of the materials available through www.succulentsandmore.com may be copied, photocopied, reproduced, translated or reduced to any electronic medium or machine-readable form, in whole or in part, without prior written consent of Gerhard Bock. Any other reproduction in any form without the permission of Gerhard Bock is prohibited. All materials contained on this site are protected by  United States and international copyright law and may not be reproduced, distributed, transmitted, displayed, published or broadcast without the prior written permission of Gerhard Bock. If you are reading this post on a website other than www.succulentsandmore.com, please be advised that that site is using my content without my permission. Any unauthorized use will be reported.