- December 03, 2018
Day 5 began with breakfast at Esau's Café in Carpinteria ("World Famous since 1939"), just a couple of blocks from the beach. Joining me were my friend Deana and her husband Robert; Deana has lived in the Santa Barbara area for 30+ years and knows everything there is to know.

Imagine gardening in a virtually frost-free climate where 85°F is considered a hot day! The lack of water, however, is a worry that's never far from residents' minds. That's one reason why Deana is such a fan of succulents. Most of them thrive in the mild coastal climate. The only exception are cacti native to extremely hot desert environments; Santa Barbara simply doesn't get caliente enough for them.

After breakfast, I had the opportunity to check out the progress in Deana's garden. As you can see, the front yard is dominated by a massive Agave americana, one of the nicest forms I've seen: 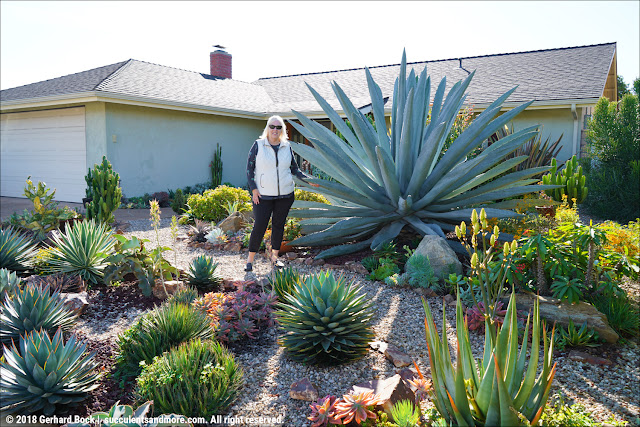 Like all Agave americana, it does offset, but Deana is diligent about removing the pups. She wants a solitary specimen, not an impenetrable tangle.

Virtually every plant was grown to perfection. Here are just a few examples. I'll have more photos in a dedicated post. 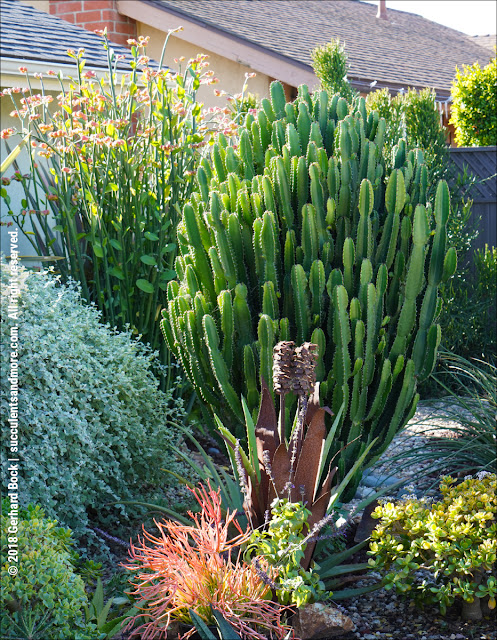 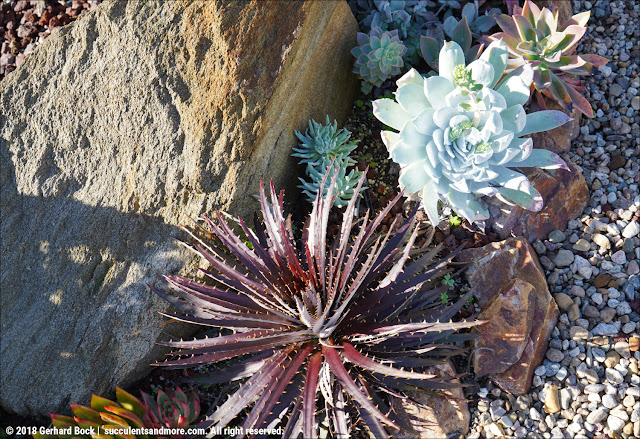 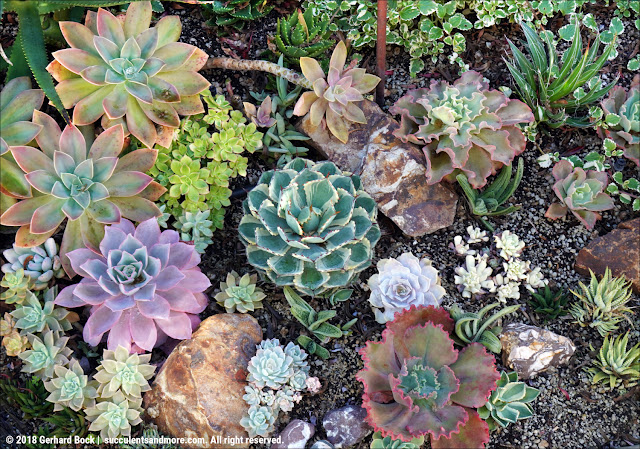 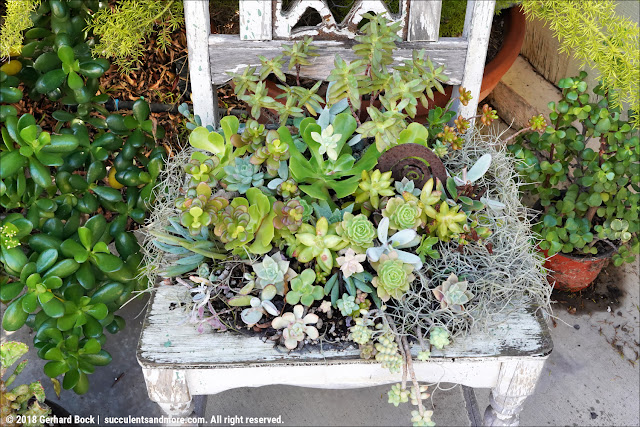 In the backyard, Deana has her very own she shed: 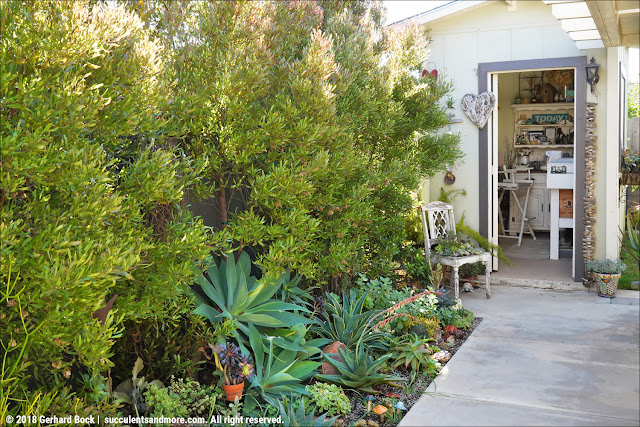 She shed, he shed: I think everybody deserves a shed like that!

Succulents in all kinds of pots, quirky and otherwise, are lined up on racks and tables. Here's just one example: 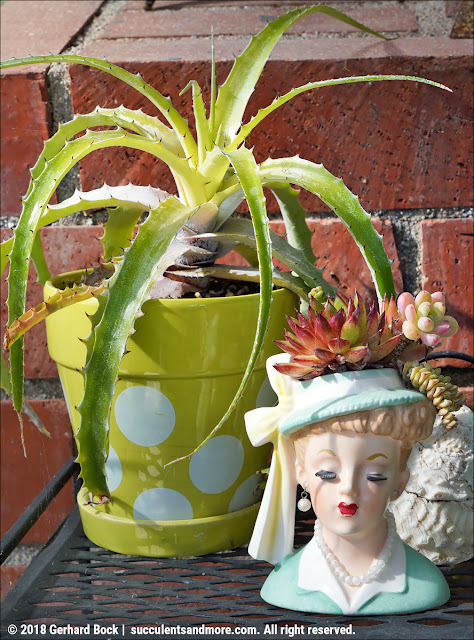 Deana would have sent me home with a trunk full of succulent offspring but I only had room for a cactoid euphorbia and a particularly cool begonia (Begonia × ricinifolia 'Immense').

After I had toured her garden, Deana took me to Seaside Gardens, a local nursery with an impressive demonstration garden. We took the long route and stopped at Deana's favorite viewpoint along the way:


Seaside Gardens is a full-service nursery with a large selection of plants that thrive in the Central Coast climate. I was happy to see a special display of Australian plants from Jo O'Connell's Australian Native Plants nursery (see day 4). It's small growers like Jo who still make nurseries exciting places of discovery. 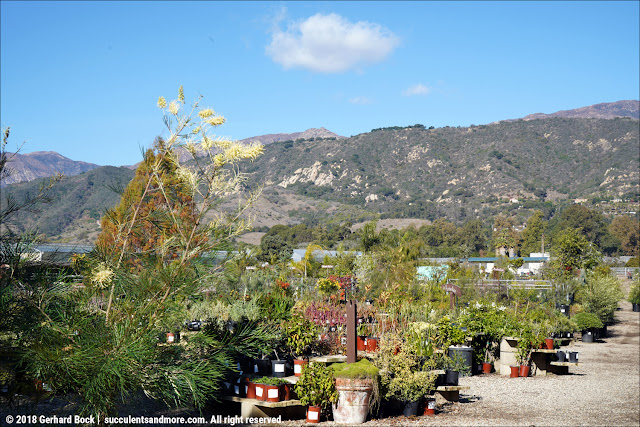 What sets Seaside Garden apart is their demonstration garden, a "3+ acre botanical wonderland:"

I'm sure each vignette shines at a particular time of year, the South African and Succulent areas look great year round. After 10+ years in the ground, many plants have grown into spectacular specimens:


One final image from Seaside Gardens especially for my bamboo friend Alan in St Louis: 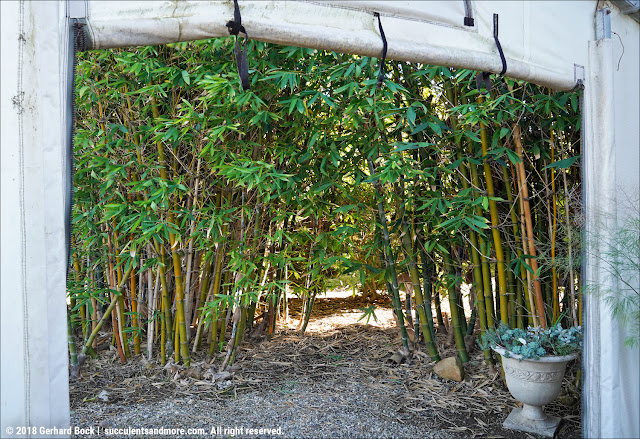 By the time we left Seaside Gardens, it was past 1:00 pm—a fact that triggered a mild panic on my part. I had several other Santa Barbara destinations on my list but I realized that I had been too aggressive in my planning and wouldn't be able to visit them all now, especially considering I still had to drive to San Luis Obispo (two hours on the route I wanted to take) and it gets dark so early at this time of year.

Rhetorical question to the universe: Why must time fly when you're having fun? Why can't it go by more slowly so you can enjoy yourself longer?

My third and final major stop of the day was the Santa Barbara Botanic Garden (SBBG). In all my visits to Santa Barbara, I'd never made it there before. This is a large garden—78 acres—dedicated entirely to plants native to California; more than 1,000 taxa are represented. In addition, there's the Blaksley Library with 15,000+ titles and the SBBG Herbarium with 150,000+ preserved specimens. I'm sure it takes more than a full day to do the SBBG justice, and all I had was an hour and a half.

Instead of running all over the place like a madman, I decided to limit myself to the areas close to the entrance/nursery. This included the small Desert Section: 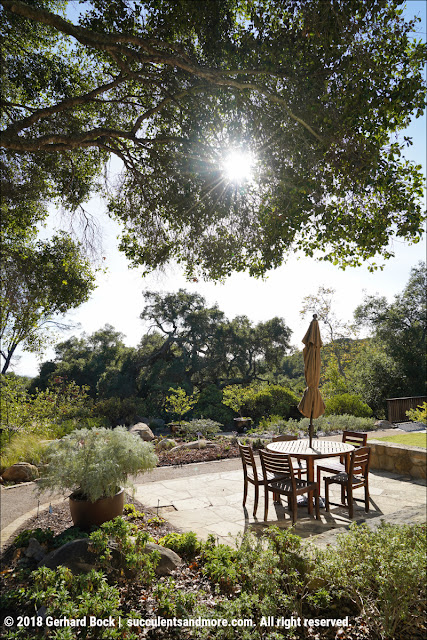 I spent most of my time in the Manzanita Section. It contains 60 of the 90 Arctostaphylos taxa that occur in California. I've recently become quite enamored with manzanitas, and it was great making personal acquaintance with many species and cultivars I only knew from the Internet.

It was reluctant to leave, but I still had a 2-hour drive ahead of me. Potential consolation: Daughter #2 just applied to UC Santa Barbara, as well as a handful of other universities in Central and Southern California, so there is a chance I might get to spend more time in Santa Barbara in the years to come.

© Gerhard Bock, 2018. No part of the materials available through www.succulentsandmore.com may be copied, photocopied, reproduced, translated or reduced to any electronic medium or machine-readable form, in whole or in part, without prior written consent of Gerhard Bock. Any other reproduction in any form without the permission of Gerhard Bock is prohibited. All materials contained on this site are protected by  United States and international copyright law and may not be reproduced, distributed, transmitted, displayed, published or broadcast without the prior written permission of Gerhard Bock. If you are reading this post on a website other than www.succulentsandmore.com, please be advised that that site is using my content without my permission. Any unauthorized use will be reported.
arctostaphylos nurseries private garden public gardens Southern California travel