Meanwhile, at home, in our own garden...

- December 09, 2018
After being gone for almost two weeks (first for Thanksgiving, then on my trip to Southern California), it seemed like I hadn't spent any time in the garden in quite a while.

We don't usually get much fall color, but the Chinese pistache in the backyard is putting on a good show this year: 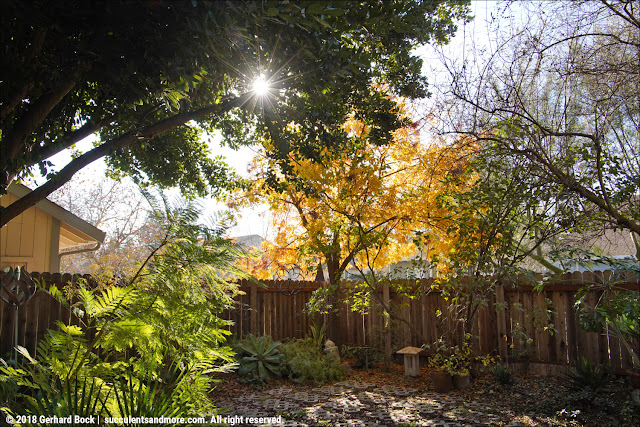 I still wish we had actually gotten the male tree we'd ordered (female Chinese pistache are much messier and don't have as much color in the fall), but it's 20 years too late to complain.
This fan aloe (Kumara plicatilis) rocks. It doesn't get much sun (it's under the chaste tree) but it continues to grow well—well enough until I find a sunnier spot for it. 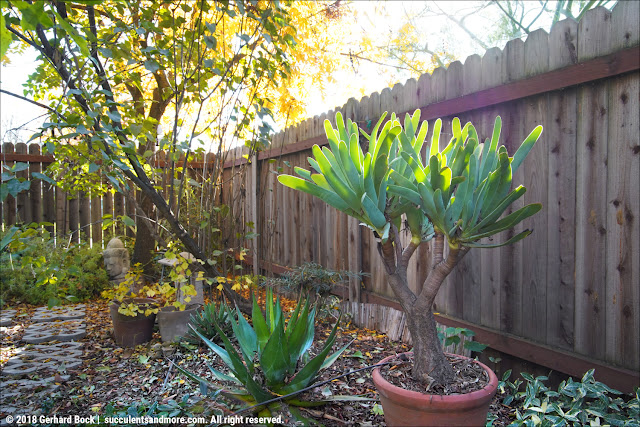 The time for sitting outside is over for a while. Time to clean the Adirondack chairs and put them away until March or April: 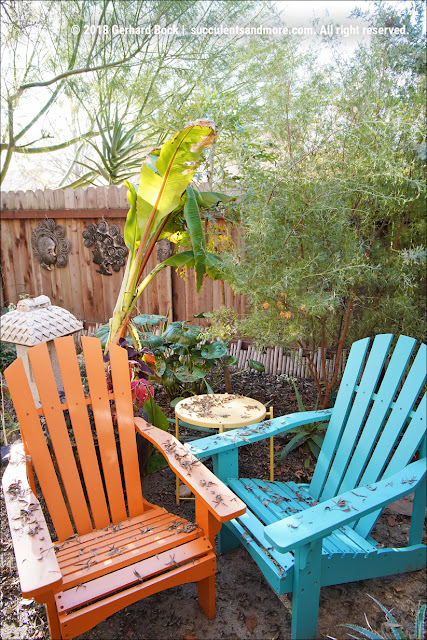 Looking at the Accuweather calendar for November and December, I see we had a low of 29°F on November 17 (although we're generally a few degrees warmer here than the weather station Accuweather gets its readings from). Cold enough to "freeze" the leaves on the manihot tree (Manihot grahamii) in the front yard: 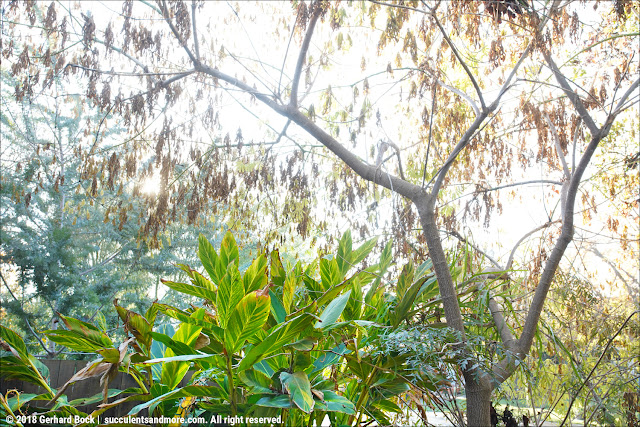 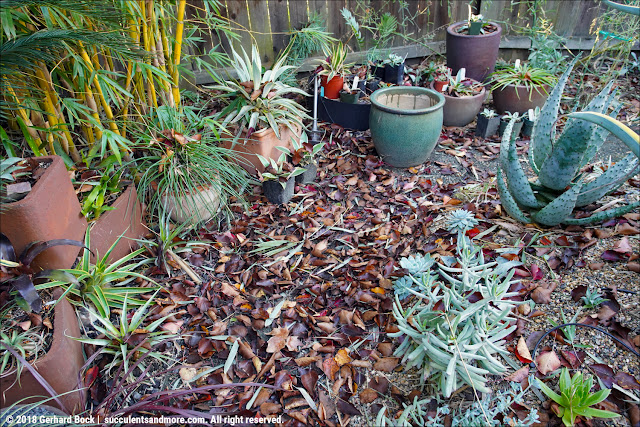 Not just from the accursed city-owned Bradford pear tree (above), but also from our bamboos: 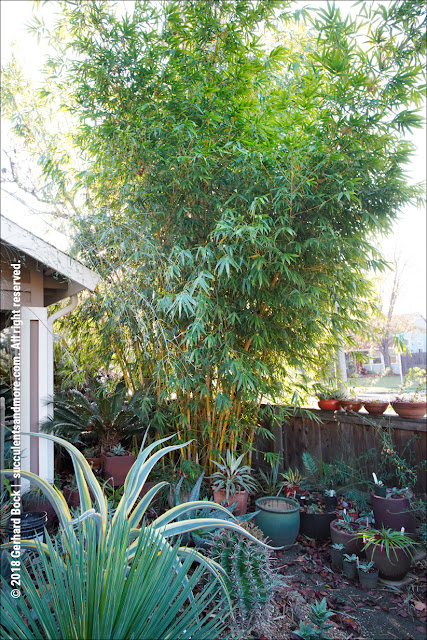 Looking beyond the leaves (for some reason I'm too focused on the d*** leaves), I see bright spots, especially flower stalks emerging on quite a few aloes:


On the sidewalk, more Bradford pear leaves (and squishy fruit): 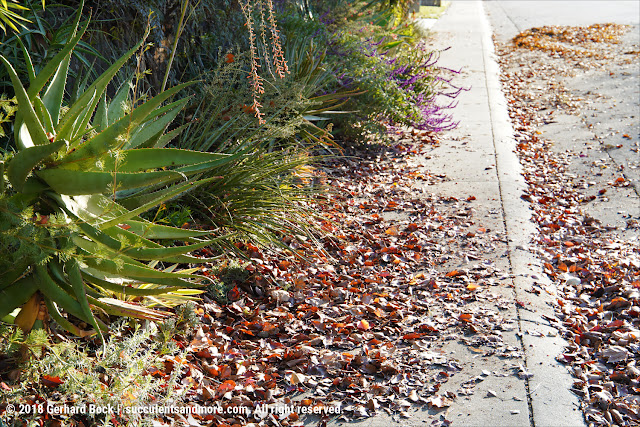 The reigning king of everbloomers (or is that queen?) is this Baja fairy duster (Calliandra californica). I don't think there's a single day of the year when it doesn't have flowers on it: 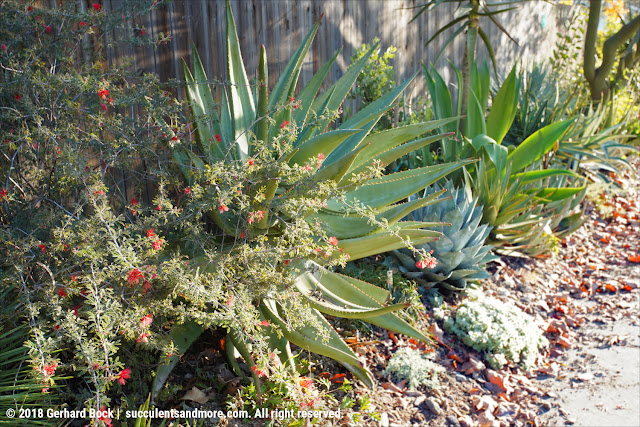 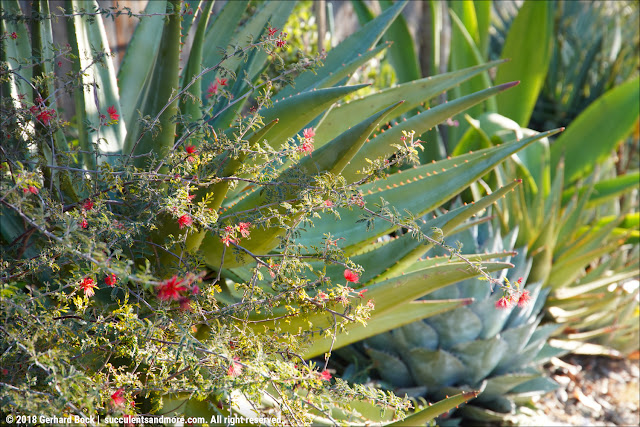 The Aloe ferox behind the Baja fairy duster is pushing a flower stalk as well:


Some of its neighbors are a bit further along already, including Aloe petricola...

Veltheimia capensis is not an aloe (it's a bulb) but it's from South Africa, too, like so many aloes: 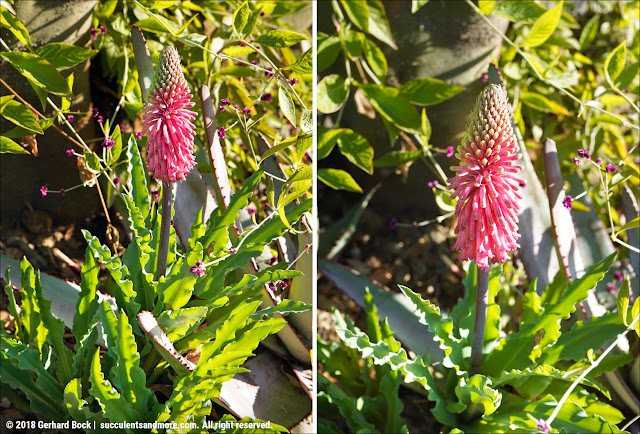 One of my favorite flowerers, Aloe 'Erik the Red', now close to 6 feet tall: 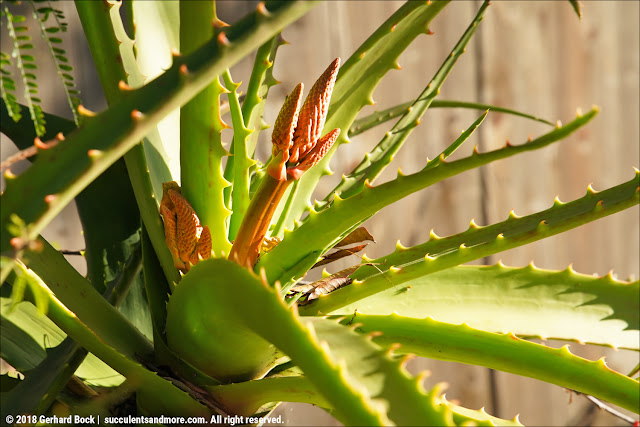 Aloidendron 'Hercules' is not flowering but it commands attention anyway (as does the apple-green Agave mitis in front of it): 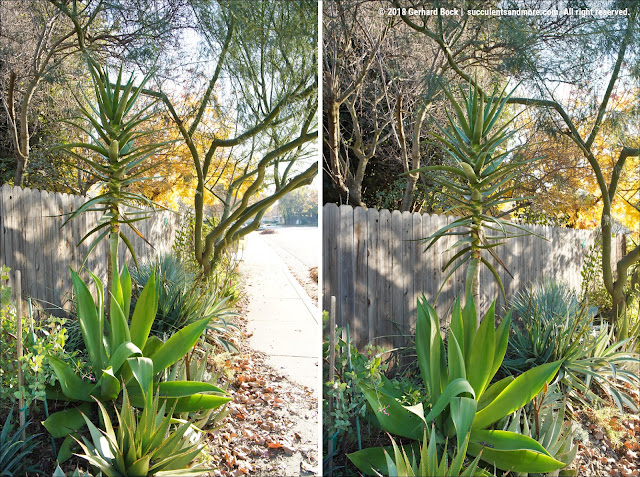 Another player in the "will it, won't it" game:


Aloe 'Moonglow' (one of three clumps we now have) getting ready for prime time:


I'm particularly excited about two aloes that have never flowered before:


And finally our earliest-flowering aloe, Aloe cryptopoda in the driveway bed. It pretty much done now, but you can still see how tell the inflorescences are—over 6 feet:

When I started this post, I was too focused on the leaf litter that is literally everywhere, but now I'm feeling a bit better. Beyond the work that needs to be done, there's quite a bit of beauty to admire!

© Gerhard Bock, 2018. No part of the materials available through www.succulentsandmore.com may be copied, photocopied, reproduced, translated or reduced to any electronic medium or machine-readable form, in whole or in part, without prior written consent of Gerhard Bock. Any other reproduction in any form without the permission of Gerhard Bock is prohibited. All materials contained on this site are protected by  United States and international copyright law and may not be reproduced, distributed, transmitted, displayed, published or broadcast without the prior written permission of Gerhard Bock. If you are reading this post on a website other than www.succulentsandmore.com, please be advised that that site is using my content without my permission. Any unauthorized use will be reported.
aloe aloe flowers cleanup fall fall color leaves
Location: Davis, CA, USA