Bromeliads with blooms and barbs, and other oddities in my garden

- March 17, 2018
Cacti, agaves, yuccas and their kinfolk may have been around the longest in our garden, but they're not the only spiky residents. More recently, they've been joined by members of a different family: bromeliads. These aren't succulents, but they're just as alluring.

While some bromeliads have armaments as fierce as those of cacti or agaves, others are very user-friendly—especially tillandsias, the much-beloved air plants that have conquered by the world by storm in recent years. My first tillandsia experience about 10 years ago didn't have a happy ending, but I learned a valuable lesson: air plants can't live off air alone; they do need water. My current crop of tillandsias, acquired in January, lives outside in metal wall planters, and I mist them once a week (or rather, I try to). Whatever I'm doing must agree with them, because to my shock and surprise, one of them is actually flowering!


This may not be a big deal to people who have more experience with tillandsias than I do, but I still think it's a minor miracle.

I'm not at a stage yet where I can ID tillandsia species, but according to my records, this is Tillandsia ionantha. I read somewhere that it's the most common air plant in cultivation. Maybe the fact that it's so easy to take care of has something to do with it.

Here's a photo of one of the three metal wall planters I have. They resemble the City Planters by Potted, but they're knock-offs I bought on eBay at a 10th of the cost. I'll have a more detailed post on these planters (and the plants in them) soon. 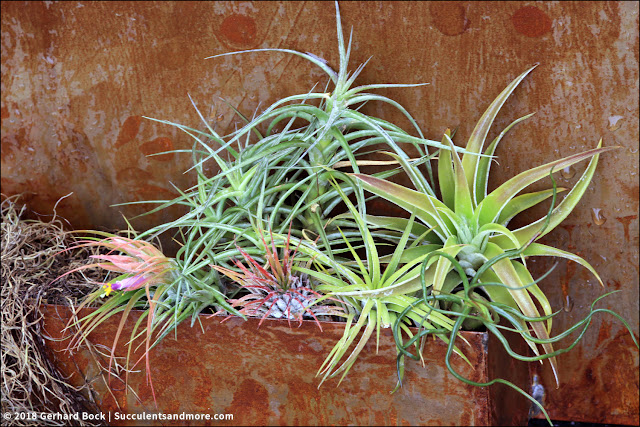 Most tillandsias are epiphytic bromeliads, meaning they spend their lives attached to other plants (usually trees). Their roots are merely anchors that prevent the plants from falling off. Water and nutrients are absorbed through the leaves.

Other bromeliads are terrestrial, i.e. they grow in the ground like "traditional" plants. Some of them—like dyckias, hechtias, puyas and deuterocohnias—come from arid regions and can be treated like succulents in cultivation. That's probably the reason they're often collected by people who are into spiky succulents like agaves or cacti. It's certainly true in my case: I love the textured leaves, the barbed teeth (often formidable), and the coloration.

Here are some of the terrestrial bromeliads in the front yard. All of them are hardy in our climate and spend the entire year outside.

The next plant I want to show you is neither a bromeliad nor a succulent. And it isn't armed in any way. In fact, it's as non-threatening as they come. But it has a beauty all its own.

Its name is Bukiniczia cabulica, the only species in this genus. It's native to Pakistan and Afghanistan (hence the species name cabulica, after Kabul, the capital of Afghanistan). A biennial, it forms a basal rosette in the first year and flowers in the second (or third). The only source I know of is Annie's Annuals—what would lovers of oddities do without Annie's!

I have two Bukiniczia cabulica growing close to each other. The one above is in full sun; it's larger but it looks like it won't flower this year. The one below is in partial shade; it's smaller, and it's sending up an inflorescence. The mother plant will die after flowering, and but the seeds supposedly germinate quite readily. We shall see.

Speaking of plants that die after flowering, here's another one: