Baby steps in the garden

- September 24, 2017
Our garden will never be "finished." It took me a while to realize this. I used to think, "as soon as we're done with this project, the garden will finally be done." But nothing is ever static in a garden. Plants continue to grow and need to be managed.

Sometimes "managing" involves the most drastic of measures: complete removal. That's what I did in the front yard, in the bed inside the fence. It used to be home to things like salvias, globe mallows and similar perennials (2010 2011 2013 2016). They look great in late spring. But by the end of summer they're rangy and ratty. And in the winter many of them go dormant. I finally had enough and took virtually all of them out in the spring. I only left the Meyer lemon, the 'Golden Tulip' leucadendron to the right of it, and the 'Jester' leucadendron and white sage to the left.

This is what the area looked like on Saturday,September 23, 2017:

The weekend of September 5-7 I was in Portland hanging out with Loree of Danger Garden, Mark and Gaz of the UK's Alternative Eden and other plant friends. On Saturday we went to the Hardy Plant Society of Oregon's PlantFest where 9 or 10 nurseries were selling plants. Afterwards we hit up a few more nurseries. After all, that's what plant geeks do. And Portland has no shortage of awesome nurseries. I drove home on Monday with a trunk full of plants: 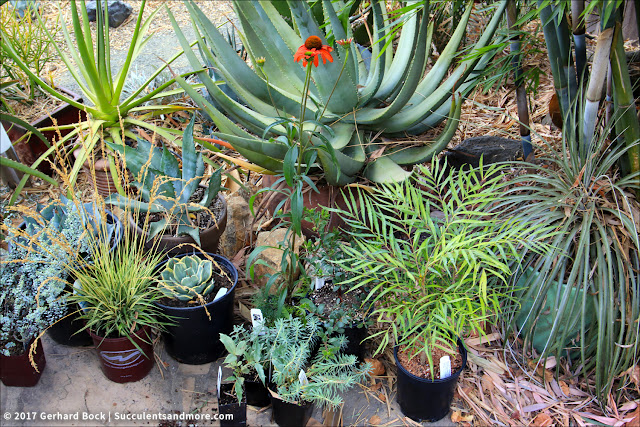 Earlier in the month I had ordered two 20x20x20 inch Corten planters. They would be the focal point of this bed. My wife and I put them together yesterday and I'm very excited. They're still plain gray steel but they will rust soon enough. 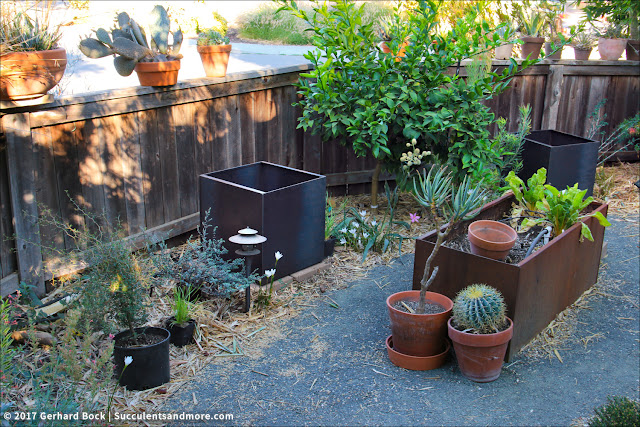 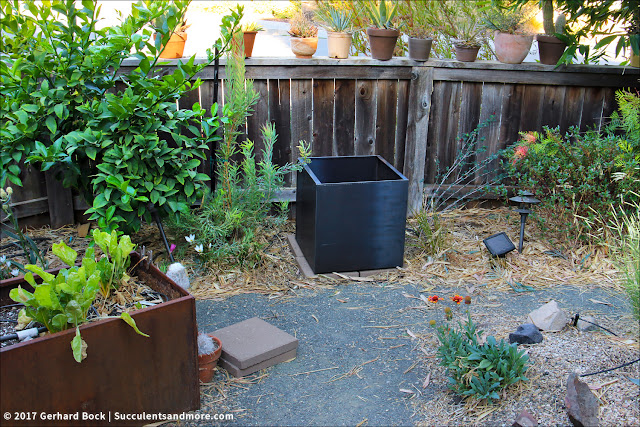 Some of my plants from Portland (plus a Lomandra 'Lime Tuff' from the recent Ruth Bancroft Garden sale) went in the ground next to the left planter: 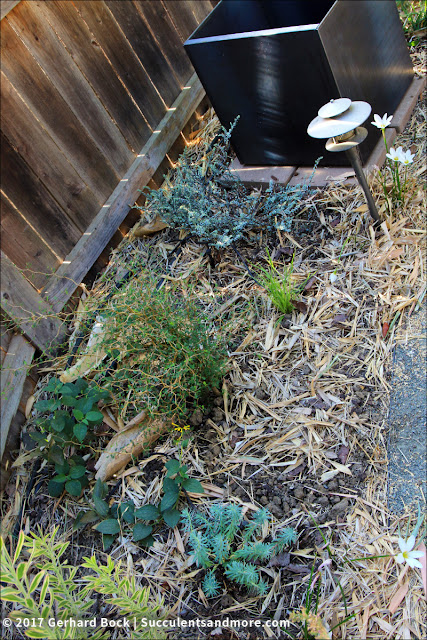 There isn't much room next to the right planter, but I'm looking for something tall and narrow to go behind it. Suggestions anyone? 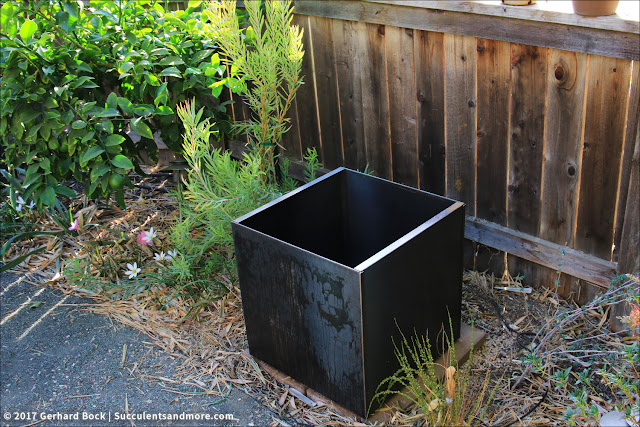 Here's a view of the right planter as seen from the front porch: 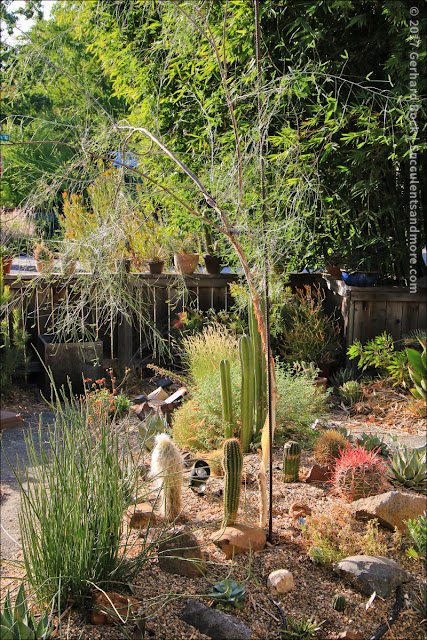 Two mahonias from Portland (Mahonia eurybracteata 'Soft Caress' and Mahonia confusa 'Cistus Silver') went in the back yard. In the photo below you can see 'Soft Caress' on the left behind the Agave victoria-reginae: 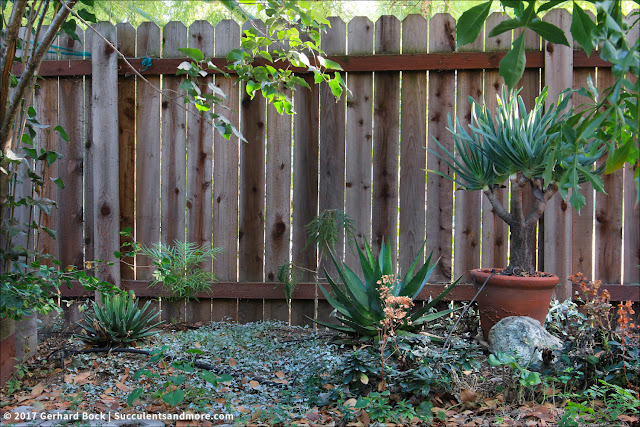 In the same bed, further to the right, I planted a Grevillea 'Wakiti Sunrise' from Markham Nature Park & Arboretum in Concord, CA. This is a low-growing grevillea that only gets to 2 ft. in height. I think it complements its neighbors very well: Grevillea 'Flora Mason' on the left and Acacia baileyana 'Purpurea' on the right. 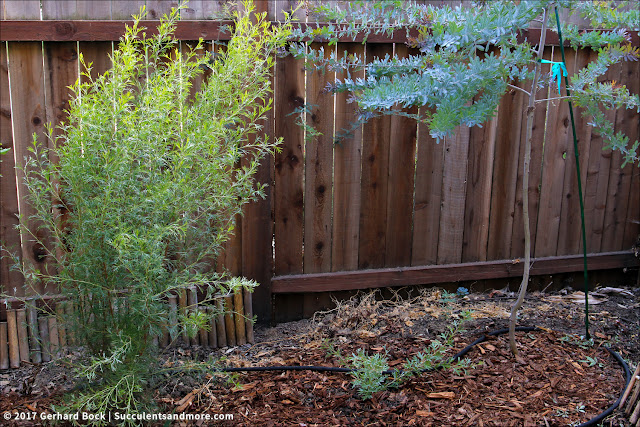 There's much more to be done, but the first steps—the baby steps—are the hardest and the most important.

Now to answer the question that I'm sure must be burning in your minds: What will I put in the Corten planters in the front yard? I'm afraid the answer is a wishy-washy "I don't know." Initially I thought of medium-sized agaves like Agave parrasana and Agave 'Snow Glow'. Right now, though, I'm leaning towards mangaves, hybrids between agaves and manfredas. Loree sent me pups of several new varieties in the spring (including this beauty) and they have thrived in pots. I'll post an update as soon as I have made up my mind.

Plants I brought home from Portland (as reminder to myself):