In recent years we’ve focused almost exclusively on the front yard, from tearing out an old pittosporum hedge to replacing the front lawn. In the process, the backyard has gotten short shrift.

Last weekend I completed what I hope was the first of many backyard projects to be tackled this fall: redoing the planting strip on the north side of house. 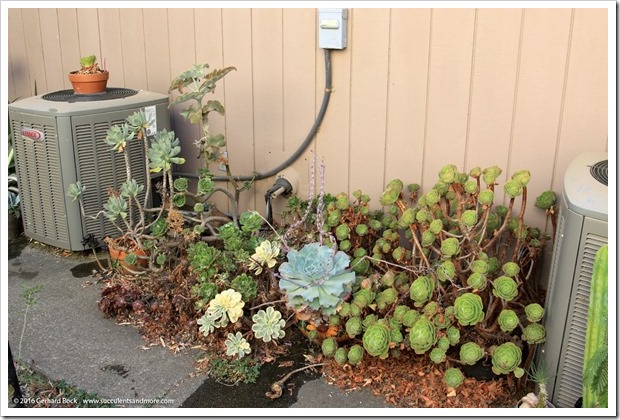 Not only was this bed completely overgrown, most of the aeoniums were infested with mealybugs. I had initially considered trying to save as many of the aeoniums as I could, but in the end I decided to toss them all and go a different route.

Let’s back up five years to May 2011. This is what this area looked like then:

In this post I described replacing the calla lilies, which only looked good from fall through spring, with a variety of aeoniums and other succulents. Two months later, in December 2012, I raved about how well the aeoniums were doing.

Unfortunately, the aeoniums didn’t work out either. Like the calla lilies before, they looked decent for six months out of the year, then went dormant in the summer and became ratty. In addition, they proved to be irresistible to mealybugs: 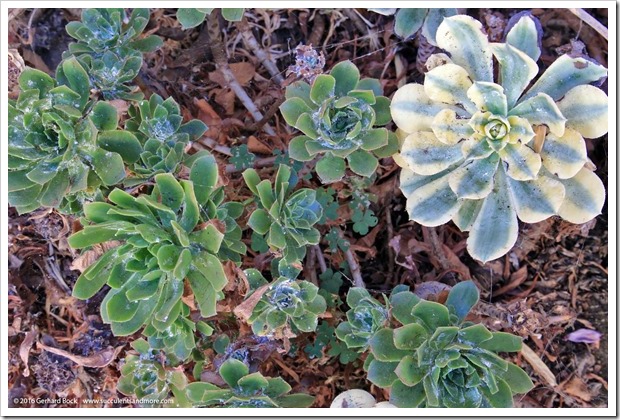 I finally had enough.

The left half of this bed fared better. The small clump of aeoniums on the right (behind the potted agave) did have some mealybugs but it wasn’t as bad as the plants on the far side of the air conditioner. The tall Aeonium ‘Cyclops’ on the left never went fully dormant and was able to fight off the mealybugs much better. 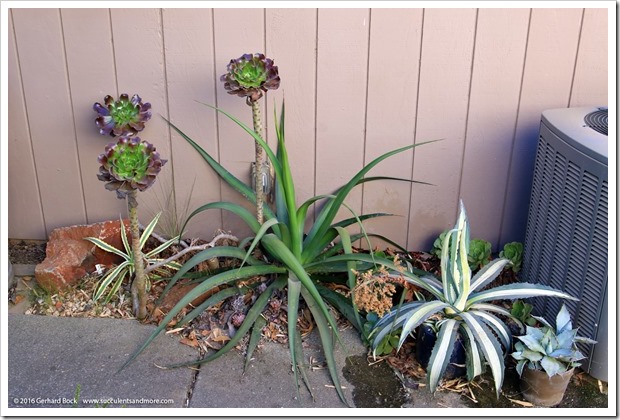 Now let’s look at the “after” pictures, right side first: 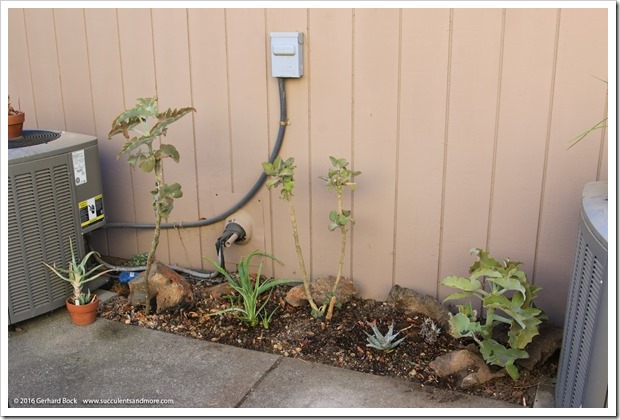 I tore out all the aeoniums, which left only one plant: the Kalanchoe beharensis on the left. It wasn’t fazed in the least by the mealybugs so I planted a second Kalanchoe beharensis in the middle (a cultivar called ‘Fang’ which had been languishing in a pot for years) and a third on the right (a new purchase from The Home Depot, which is carrying both the regular beharensis and ‘Fang’ in 2-gallon pots right now). 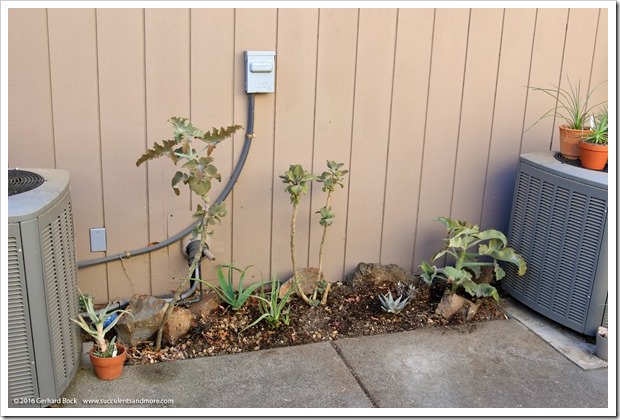 In between I added several aloes and a variegated Agave bracteosa: 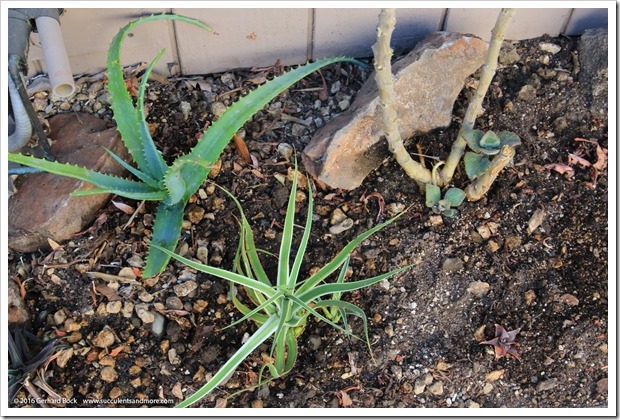 Aloe megalacantha (your plant, Hoover Boo), Agave bracteosa ‘Monterrey Frost’ and a tiny Aloe ‘Christmas Carol’ I had sitting around in a pot 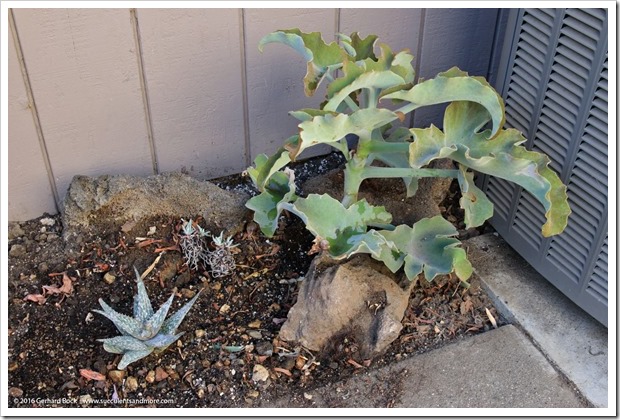 Aloe zubb × squarrosa (a Brian Kemble hybrid), small NOID dudleya that I’m sure won’t live for long (I kill dudleyas with great regularity) and the Kalanchoe beharensis from The Home Depot

The only change I made to the left-hand side of this bed is adding another ‘Cyclops’ I had in a pot (on the right, behind the potted agave). 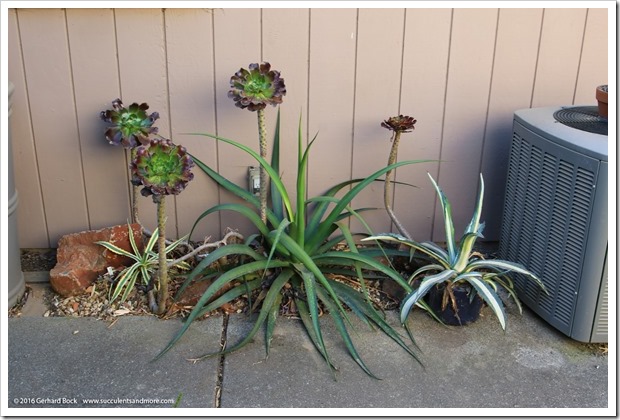 That Agave ‘Mateo’ sure has grown! 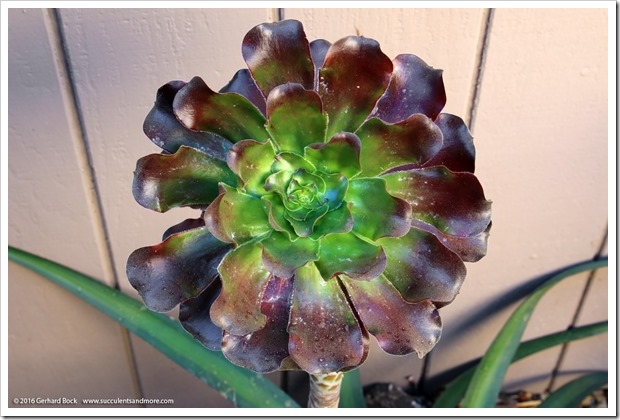 While I generally don’t use pesticides, I decided to err on the side of caution for this project and added a generous sprinkling of systemic pesticide (Bonide Systemic Granules) around each newly planted succulent.

Even though this wasn’t a big project, it gave me a much-needed jolt of energy—and enough incentive to tackle other spots in the backyard that need a major injection of TLC. If the weather forecast holds true and we actually get our first rain of the season starting Thursday night, the time for planting might finally be here.