Let’s be honest: Does anybody actually enjoy yard cleanup? I don’t hate it, the way I hate going to the dentist, but I don’t find much thrill in it either. But it has to be done now and then to keep things reasonably orderly.

Writing about yard cleanup is similar. It’s not the most enjoyable topic in the world, but when one keeps a visual diary of one’s gardening activities—like I do—it’s a necessary thing to keep track of progress in the yard.

Since the weather has been nothing short of stunning lately and I have decided for myself that winter is over—possibly never to return, much like our rain—I decided to get cracking on cleaning up the front yard this past Sunday. My wife and two daughters helped, and we got quite a bit done in a short amount of time.

My main focus was on cutting back the grasses and perennials inside and outside the front yard fence. Here are a few “before” photos: 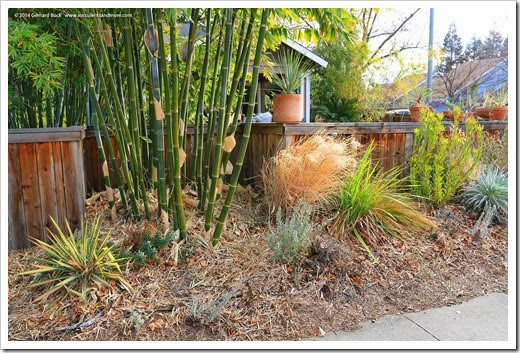 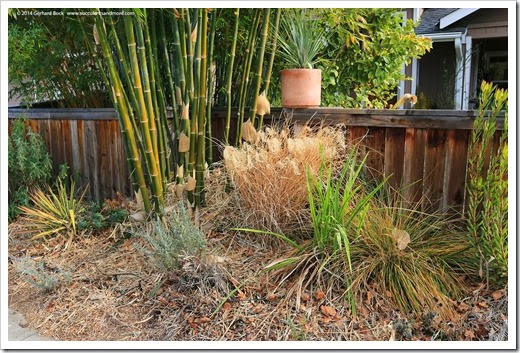 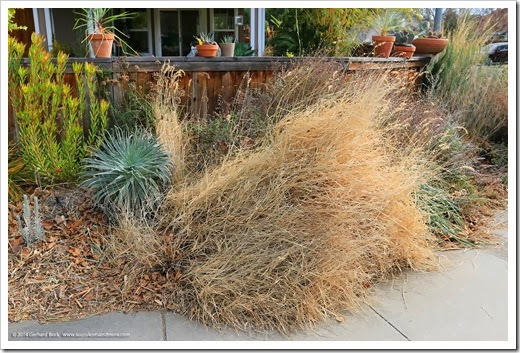 And here is what the front yard bed looks like now: 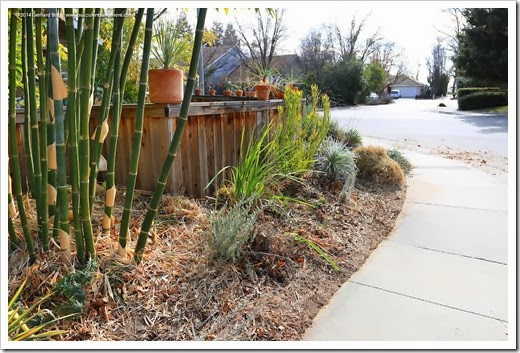 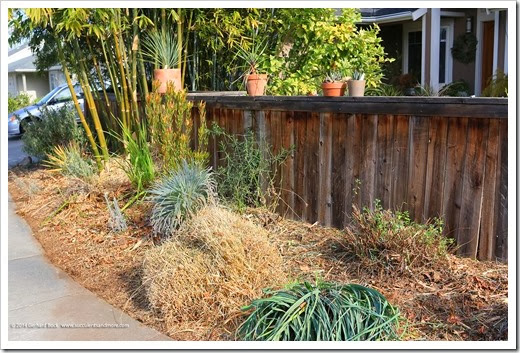 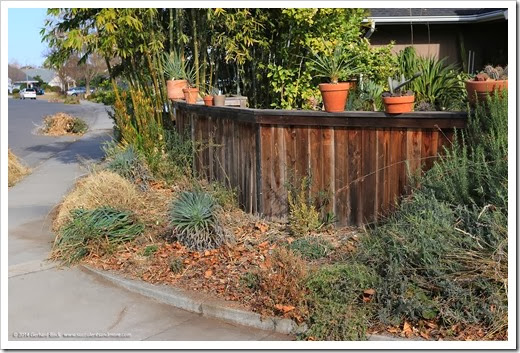 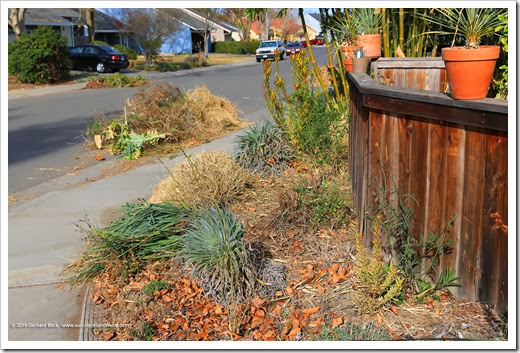 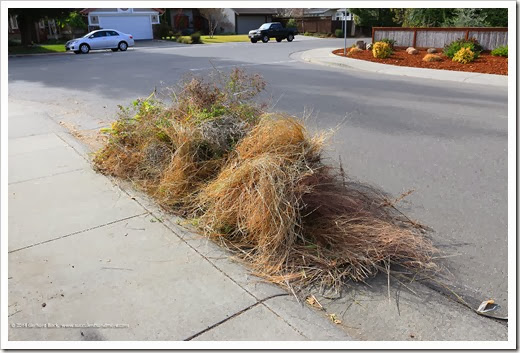 Thank god (or the City of Davis) for curbside yard waste pickup!

Cutting back the grasses near my two almost-adult towers of jewels (Echium wildpretii) exposed the frost damage from the artic blast that swept through the West Coast in early December. There are a lot more dead leaves than I had thought. Still, the plants are very much alive, and I expect both of them to flower this spring. 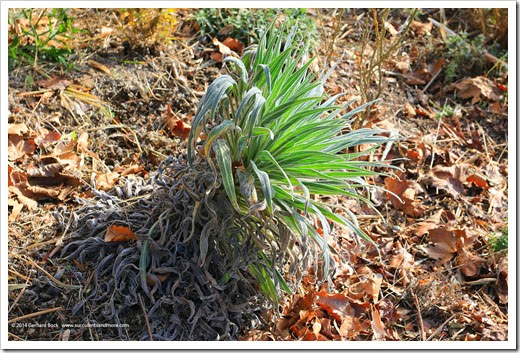 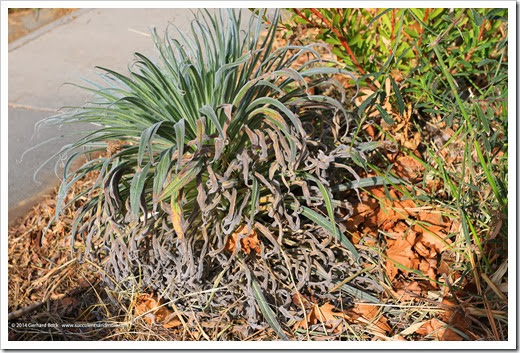 When we created the front yard in 2006, virtually everything we planted fell in two categories: (1) drought-tolerant Mediterranean and prairie perennials such as lavenders, salvias, rudbeckias, echinaceas, and (2) ornamental grasses. Many of the perennials have died since then (they were fairly short-lived species to begin with) and the larger ornamental grasses (especially the Miscanthus sinensis) have been removed. In other words, a lot of the original plant material has been replaced, but what is there now is still true to original design spirit.

Last fall I started to overhaul one section that had been dominated by an emerald bamboo (Bambusa textilis ‘Mutabilis’). As you can see in the next couple of photos, it doesn’t look like much now, but the foundation has been laid. 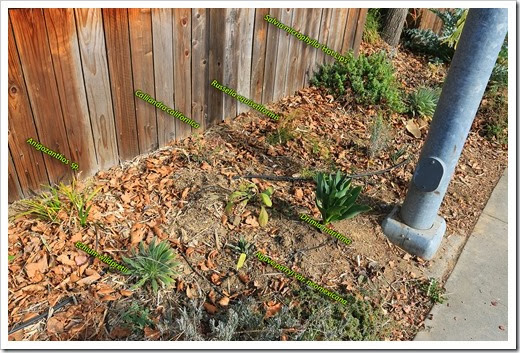 The shrubs and perennials I’ve planted will grow fairly quickly, and this spring I will add a half dozen agaves planted on mounds and surrounded by rocks for additional interest. This part of the front yard bakes in the sun for most of the day, so I’ll use medium-sized agave species that thrive in full sun, such as Agave colorata, Agave zebra and Agave deserti. With any luck, things will look quite different in a year’s time. 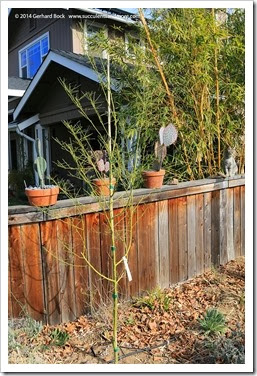 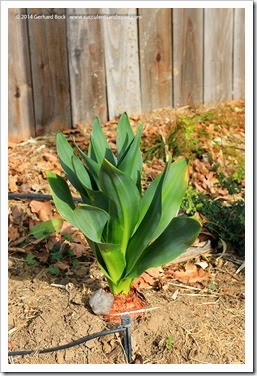 LEFT: One of the two ‘Desert Museum’ palo verdes (Parkinsonia ‘Desert Museum’) in the front yard. The other is in the newly renovated driveway succulent bed.  RIGHT: The sea squill bulb I found at Home Depot in September has produced a nice set of leaves. 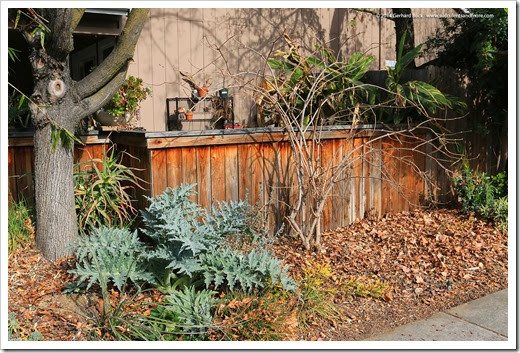 Most people think of globe artichoke (Cynara cardunculus var. scolymus) as a vegetable. To me it’s an ornamental with supreme architectural qualities. The area to the right of this artichoke will be home to one or two more agaves planted on a mound.