This past weekend has been the most productive for me in many months. I not only created a new succulent bed in the backyard, I also did some repotting and I tackled a large and sprawling Mexican bush sage (Salvia leucantha) along the street that goes by the side of our house. My wife and I had been talking about removing this particular specimen for a number of years but every time it started to bloom—like right now!—our resolve dwindled. No doubt, it’s a stunningly beautiful plant and even though it’s quite common around here, people still stop to admire it. 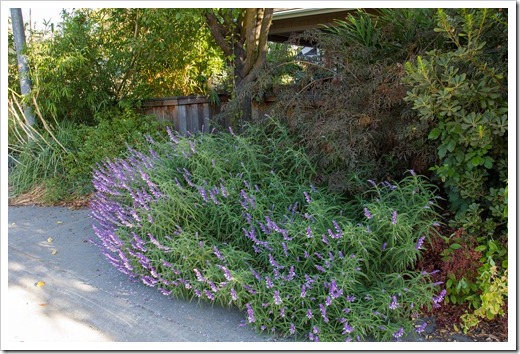 However, as you can see in the next photo, this clump had gotten so large that it was completely covering the sidewalk, forcing pedestrians to step into the street to walk around it 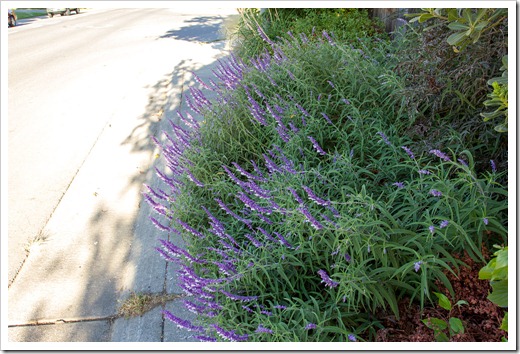 The good citizens of the People’s Republic of Davis don’t hesitate to call the city for just about any code violation. We’ve received citations for lesser offenses so I had to do something about this plant. One solution would have been to cut it back from the sidewalk, but considering how vigorous Salvia leucantha is, it would only have been a temporary measure. After much soul searching, we opted to go for a permanent solution and remove it altogether. 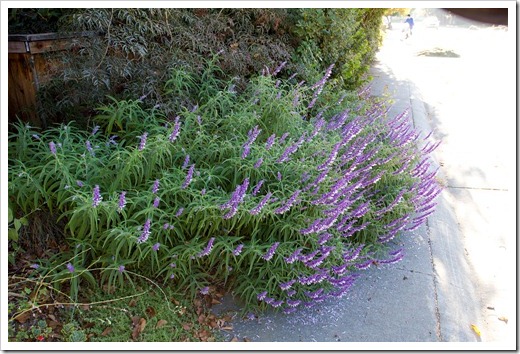 That’s what I did this morning.

I was hoping to remove the root ball in one piece so I could find a new home for the plant but the crown was so brittle, it broke into many smaller pieces as I was digging it up. I saw no alternative but to put everything into the curb for yard waste pickup on Monday morning. 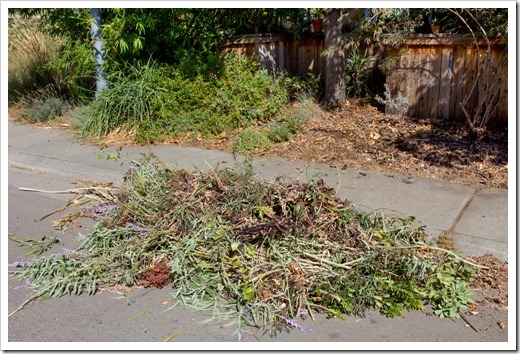 Seeing this 4 x 6 ft. area so bare was a strange sight. But I didn’t think too much about the beautiful shrub I’d just removed and proceeded to plant the compact cenizo (Leucophyllum frutescens ‘Compacta’) I’d bought at Yucca Do a few months ago. Leucophyllum frutescens ‘Compacta’ is a smaller version (4 x 4 ft.) of this Texas native, also known as cenizo, Texas ranger, Texas rain sage or barometer bush because it is said to flower immediately after rain. (I think “barometer bush” is a silly name—I don’t need a plant to tell me that it just rained. Plus, ours is starting to bloom now even though it hasn’t rained since early May.) 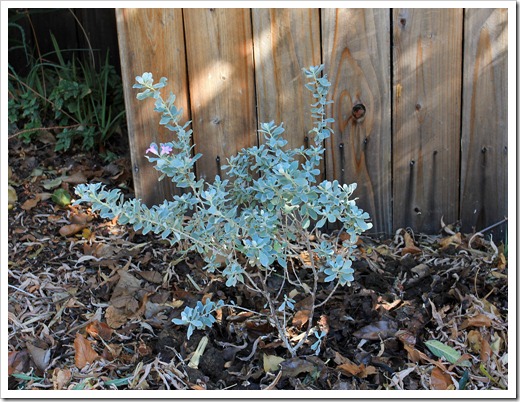 I fell in love with the full-size version of cenizo when I saw it at the UC Davis Arboretum years ago. From everything I’ve read, Leucophyllum frutescens is tough as nails and very undemanding as long as the soil is reasonably well draining. I dumped a bucket of coarse sand onto the planting area and worked it into the soil (which was quite friable already from the many leaves that have decomposed there over the years). It’s ironic that in our area we have to jump through hoops to create what is essentially “poor” soil! 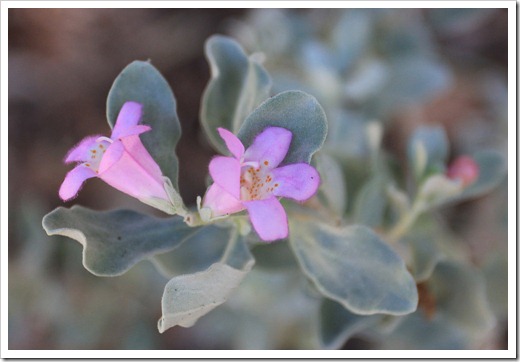 In front of the cenizo, I planted a Grevillea ‘Austraflora Fanfare’ (Grevillea gaudichaudii × longifolia). This prostrate Australian shrub with attractive sawtooth leaves stays under a foot in height but can spread to 15 ft. across, making it ideal as a groundcover (I intend to shape it as needed). It produces red toothbrush-shaped flowers from spring to late fall. Actually the specimen I plant is just now starting to bloom; I should have updated photos soon. 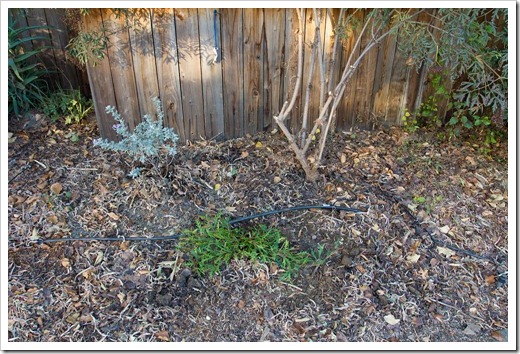 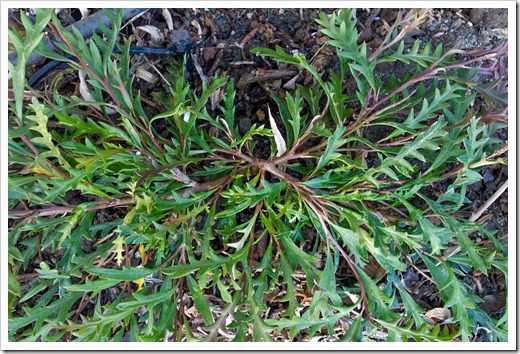 Coming back to Salvia leucantha—yes, I still feel bad about removing it—has anybody been able to successfully grow the compact version sold under the cultivar name ‘Santa Barbara’? I’ve tried two two now and they simply won’t thrive. They linger for a season or a year and eventually croak. In contrast, the full-size Salvia leucantha is very easy to grow here. I’d love to have a smaller version of Mexican bush sage in our garden but I may have to wait until somebody develops a more viable dwarf.