Last Saturday, October 1st, I attended Succulents Garden’s Extravaganza in Castroville, CA. This two-day open house by what has to be the largest succulent nursery in Northern California was chock-full of talks and demonstrations. According Succulent Garden’s Facebook page, 600 people had signed up, but from the number of cars and people I saw on Saturday, the number of guests might have been even higher. 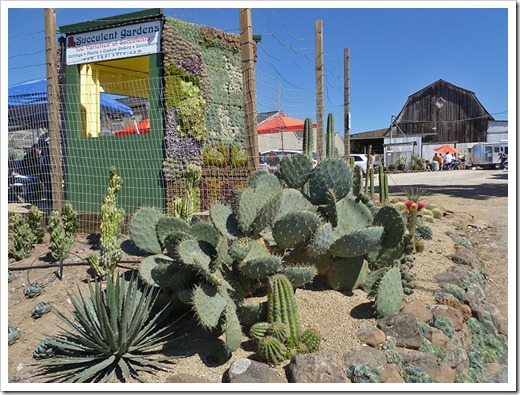 Opuntias, echinopsis, and barrel cacti at the entrance to Succulent Gardens

I wish I’d had time to be there on both days because the schedule of events truly was special (see here if interested). Luckily, I made it in time on Saturday morning to hear Debra Lee Baldwin, author of Designing with Succulents and Succulent Container Gardens, speak about the use of succulents in residential landscaping.

Debra is not only a leading garden writer, she’s also a gifted photographer (many of the photos for her two books were taken by her). Her slide show was beautiful and inspirational; unfortunately the projector didn’t work correctly and none of the reds in her photos were reproduced.

One important point Debra made in her talk is particularly relevant to California since our climate is so dry and wildfires are common every summer: Thanks to leaves filled with moisture, succulents are arguably the best type of vegetation you can grow to protect your house from wildfires. Debra has an interesting article about this topic on her website.

After Debra’s talk I began to explore the nursery and soon I was happily lost among thousands upon thousands of plants. I meant to attend another talk at 1pm but looking at so many different succulents (the nursery grows more than 700 species) was so much fun that I decided to skip the talk in favor of taking photos.

I ended up with so many good photos that I decided to split this post into two parts. Today I’ll focus on cacti, agaves and aloes, and tomorrow I’ll talk about echeverias and aeoniums, two groups of plants particularly well represented at Succulent Gardens.

Ready to take a walk through the nursery? Let’s start at the logical spot: the entrance.

One side of the entrance is landscaped with cacti. While this is a beautiful spot, the impression is a bit misleading: The nursery doesn’t seem to grow a lot of cacti. This was a bit of a disappointment to me, considering my recent infatuation with these prickly beasts. I saw a few golden barrel cacti, mammillarias and torch cacti for sale in the arts and crafts area, but just one type of prickly pear growing in the production greenhouses. 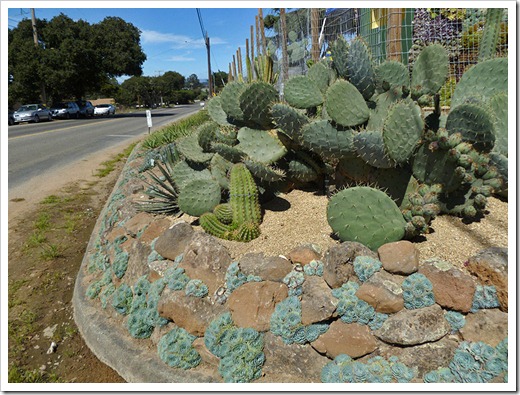 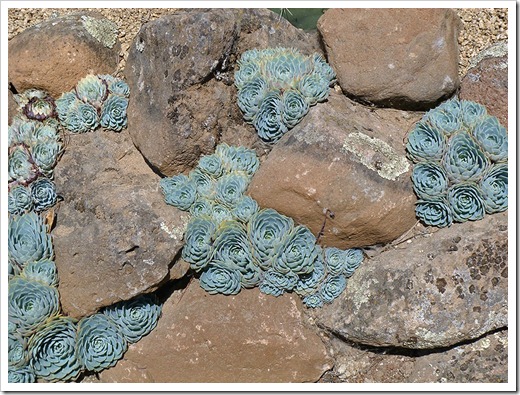 Echeveria imbricata in the planting pockets between rocks. This species offsets very quickly. 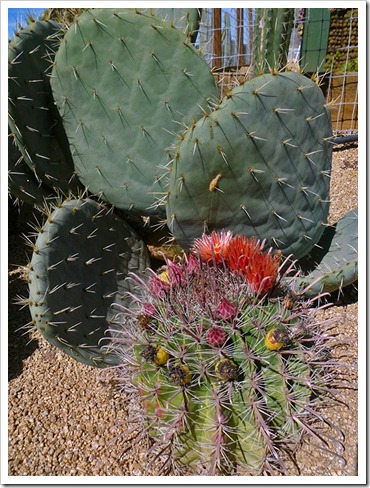 One of my favorite barrel cacti, Ferocactus peninsulae. The flowers are truly spectacular. 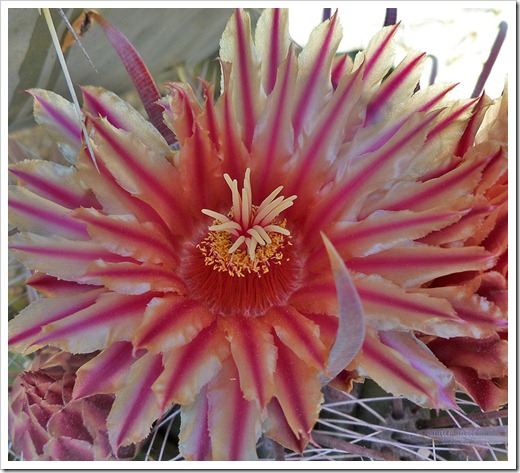 Ferocactus peninsulae flower. I was hoping to find a specimen for sale, but no luck. 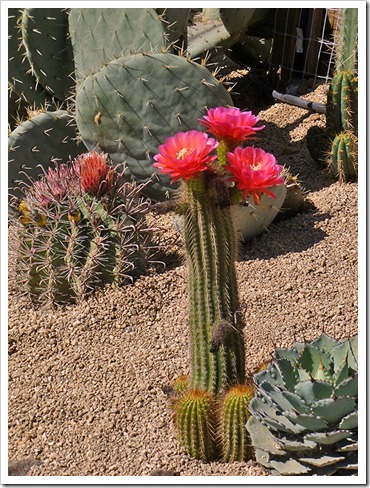 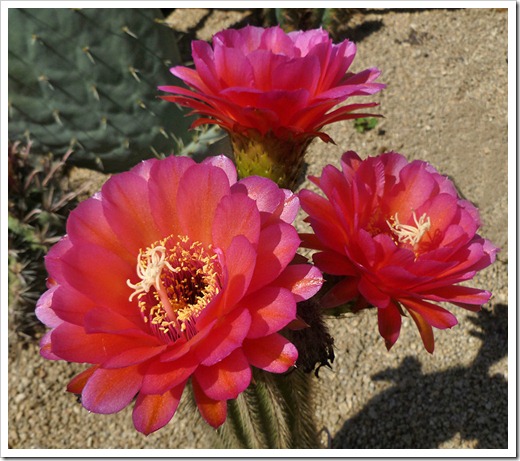 Poking around the nursery, I found this blooming prickly pear (opuntia). Unfortunately, there was no label, but the flower was jaw-droppingly beautiful. Check out the iridescent glow of the petals. If anybody can ID this species, please leave a comment at the bottom. 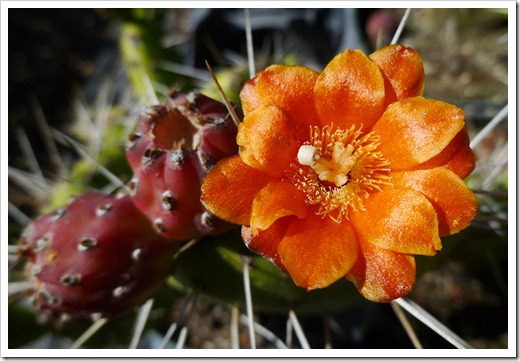 This grouping of golden barrel cacti (Echinocactus grusonii), Agave macroacantha (?) , and an unidentified aloe and columnar cactus looks great against the stucco wall on the left and the corrugated metal on the right. Lots of texture. 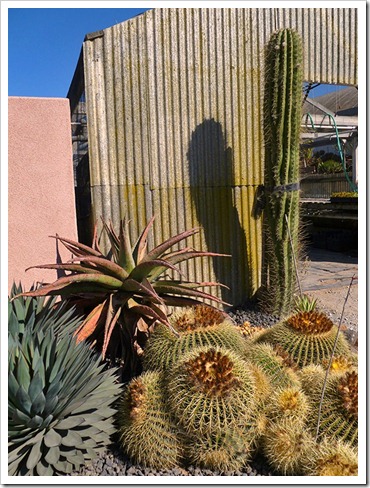 “Inspired” is the perfect word for this juxtaposition of golden barrel cactus (Echinocactus grusonii) and Aeonium arboreum ‘Zwartkop.’ While the roundness of the cactus is loosely mirrored in the rosettes of the aeoniums, the contrast between the stiff cactus spines and the soft leaves of the aeoniums is wonderful. 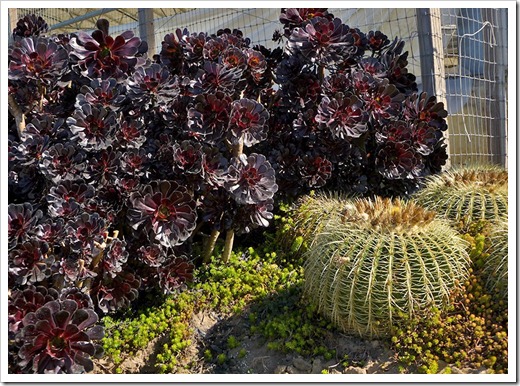 Agaves are what got me interested in succulents a number of years ago, and I’m still partial to their bold shapes and their edginess. Succulent Gardens had quite a few agaves planted out along the edges of their 3-acre property and also in various places inside the nursery. 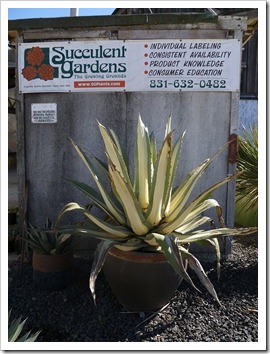 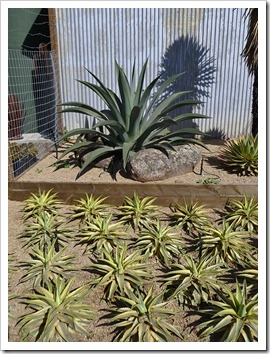 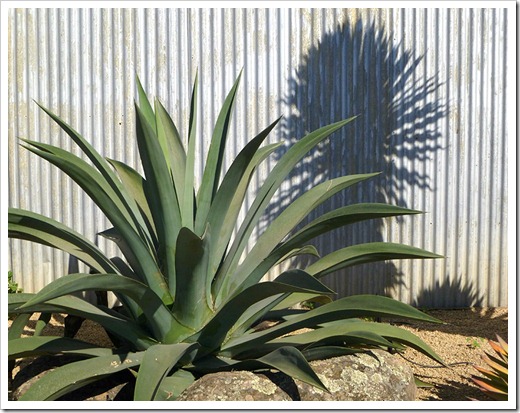 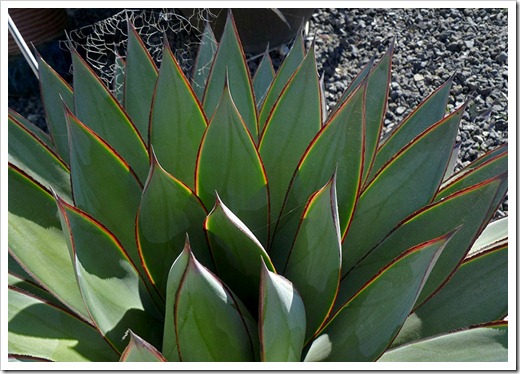 And here are some agaves growing in pots. 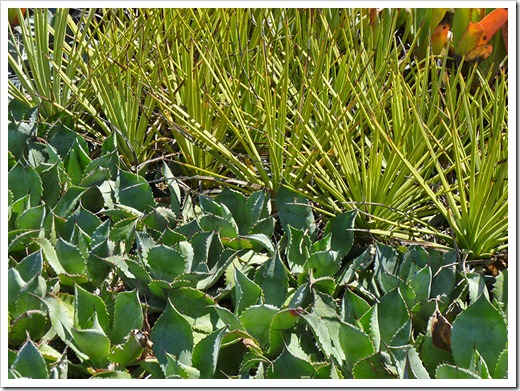 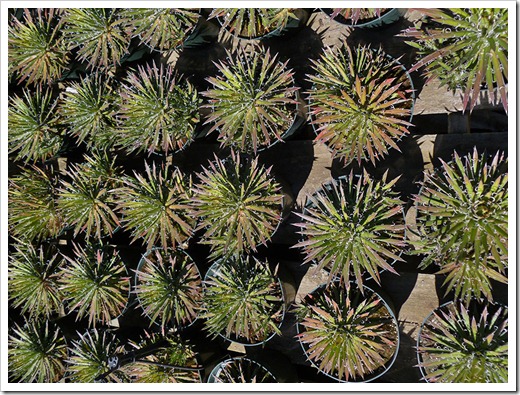 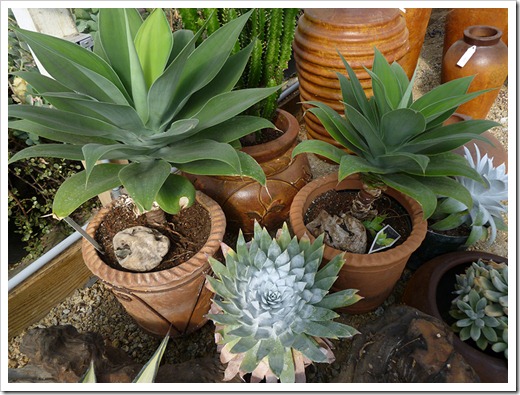 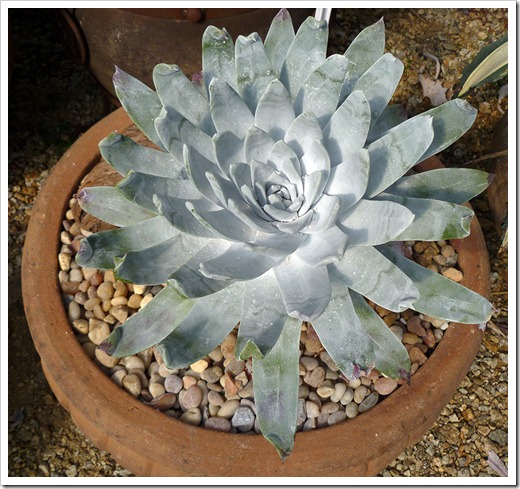 Dudleya brittonii. Its leaves are almost blindingly white. Very difficult to grow in our climate (too hot in the summer).

Moving from agaves on to aloes. I saw several larger aloes planted outside but I wasn’t able to identify them. Due to harsh lighting conditions I didn’t even bother to photograph them.

Here are two aloes I did recognize instantly. They’re so unique, there are no other species that look anything like them. They also happen to be my favorite aloes. 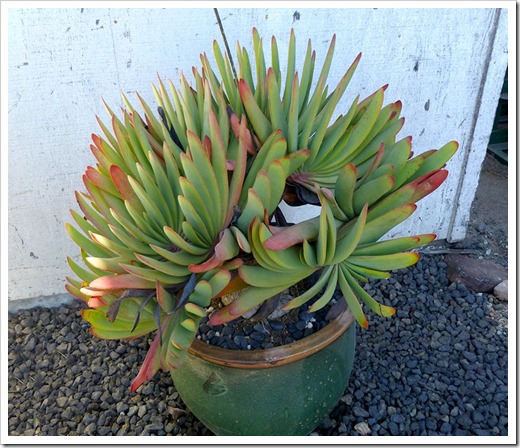 Fan aloe (Aloe plicatilis). This species is truly spectacular with its leaves that look like fleshy tongue depressors arranged in a fan shape. Aloe plicatilis used to be quite uncommon five years ago but I’m seeing it in more and more nurseries. In addition to this beautiful specimen I saw lots of 1-gallon plants that already had a nice trunk with two leaf fans. 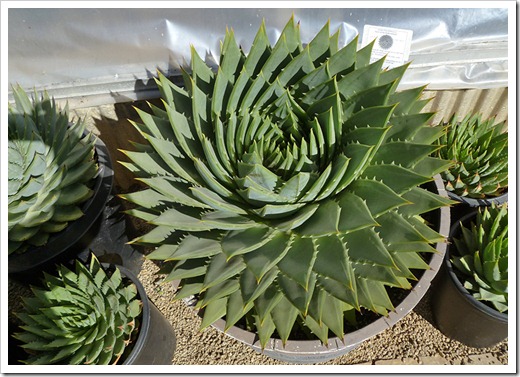 Spiral aloe (Aloe polyphylla). Arguably the most spectacular aloe of all. Thanks to tissue culture propagation much more available (and affordable) than before, but still vexingly difficult to grow in hot climates. I’m on my second specimen and I keep it in the shade when temperatures are above 90°F. Native to the Drakensberg Mountains of Lesotho, a small country in the south of Africa, Aloe polyphylla is quite hardy (5-10°F, i.e. zone 7) and likes more water than most other aloes. 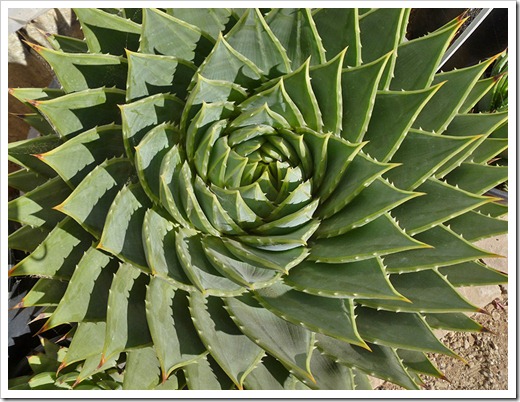 Adult plants form the characteristic spiral, either clockwise or counterclockwise.
Alan Beverly of Ecoscape is the world’s leading expert on Aloe polyphylla. I would have loved to hear his presentation on Friday. I bet it was fascinating. Luckily, there’s quite a bit of information on Aloe polyphylla on his website.

Succulent Gardens grows hundreds of other succulents, including dozens of sedums, sempervivums, crassulas, kalanchoes, etc. etc. I would have needed days to photograph them all. I didn’t want to block the aisles of the greenhouses so I didn’t even try to do any serious macro photography. However, I did take a few photos of sempervivum flowers. I’m always amazed by the outsized and intricate flowers produced by these small succulents. 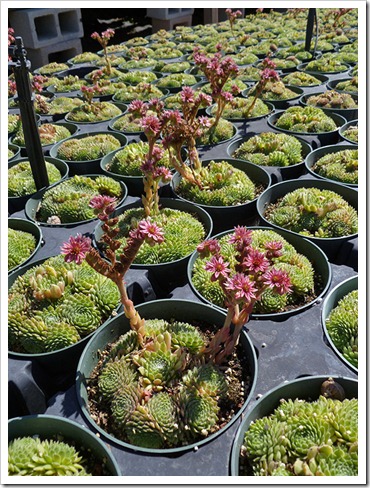 Unlabeled sempervivums in 6-inch containers, many of them in flower 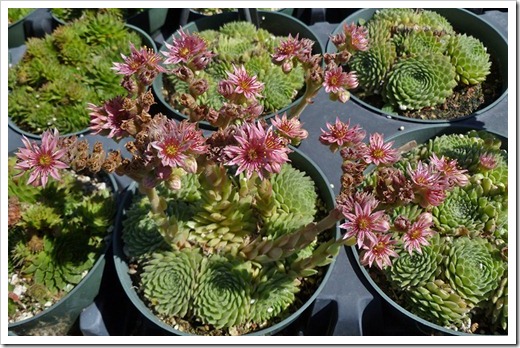 Sempervivums are monocarpic, i.e. the rosette that flowers will die. Luckily, there are lots of babies to keep the cycle going. 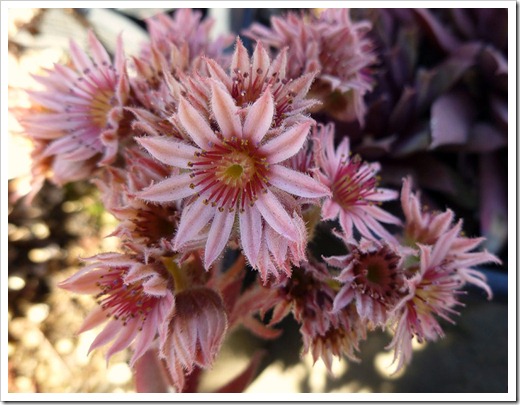 Closeup of sempervivum flower. Look at the many different colors and hues.
There’s even some blue in there!

Tomorrow I will write about the echeverias and aeoniums I saw at Succulent Gardens, and I will also reveal my purchases—you didn’t think I left without buying something, did you?