I brought home three Bunny Ears (Opuntia microdasys) from our recent trip to Southern California. Unlike most other prickly pear species, these don’t have regular spines and hence are considered more “user-friendly”. 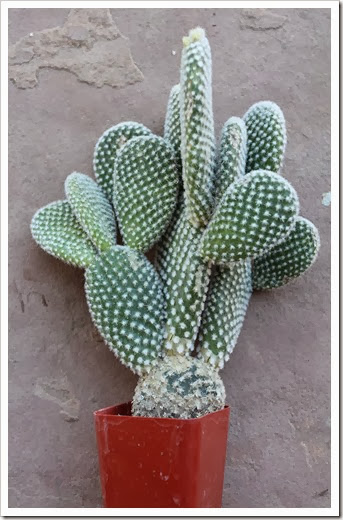 However, while they look soft and cuddly with their fuzzy polka dots, I’d advise against getting too close. What looks like soft fur are actually bundles of glochids—very small and very fine hairy spines that detach at the slightest contact. It seems that just the vibration from moving the pot dislodges them. You could easily have a few dozen stuck to your skin without having done much at all!

While glochids don’t hurt the way regular cactus spines can, they have a way of attaching themselves to clothing and of course your skin where they cause irritation that can become quite maddening after a while.

Glochids are too small and too brittle to effectively remove with tweezers. Remedies range from applying rubber cement to your skin, letting it dry, and then rubbing it off, to sticking duct tape to your skin and peeling it off. I use clear packing tape (doesn’t hurt as much as duct tape when I rip it off), and it does the trick.

You can’t be careful enough around these beauties. Whatever you do, make sure you don’t handle them when it’s windy, otherwise you might end up with glochids in your eyes. That is not fun, I can tell you from personal experience.

The three Bunny Ears I bought at Mariscal Cactus & Succulents in Desert Hot Springs had definitely outgrown their nursery containers so I decided to repot them right away.

Expert cactus growers employ several techniques for containing glochids. Some simply spray the plants down before handling them to prevent glochids from becoming airborne. Others put the entire plant in a plastic bag. That seemed to me like the most prudent approach, so that’s what I did with my two small Angora Bunny Ears (the white-spined variety). 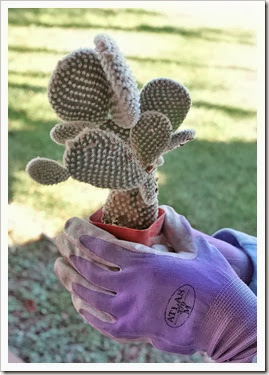 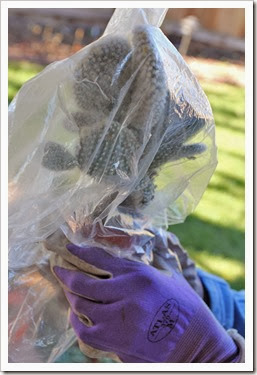 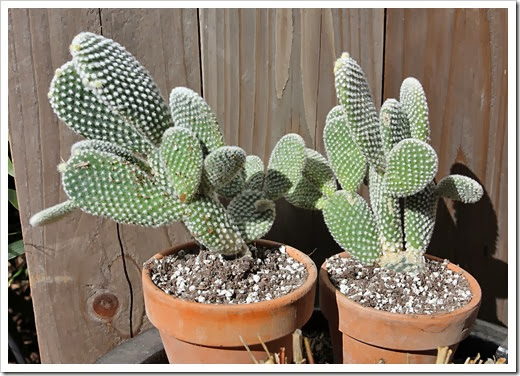 I didn’t have a large enough plastic bag handy for the yellow-spined Bunny Ears (regular Opuntia microdasys), which as you can see in the photo below is quite a bit larger and much heavier than the diminutive white-spined Bunny Ears. Being too lazy to hunt for a bag, I decided to simply reuse the paper in which the nursery had wrapped the plant. While I’m sure that was better than not covering the plant at all, countless glochids escaped and drifted everywhere—on my clothing, my gloves, my skin. That necessitated liberal use of packing tape to remove them from my skin and gloves; my clothes I simply put in the washing machine.

If I had to do it over again, I’d definitely make the extra effort of procuring a plastic bag and sealing it tightly around the base to keep in as many glochids as possible. You live and learn! 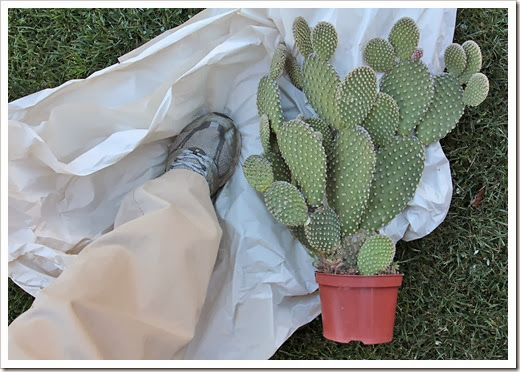 Yellow-spined version of Bunny Ears prickly pear (Opuntia microdasys) with my foot for scale. The plant is 18 inches tall. 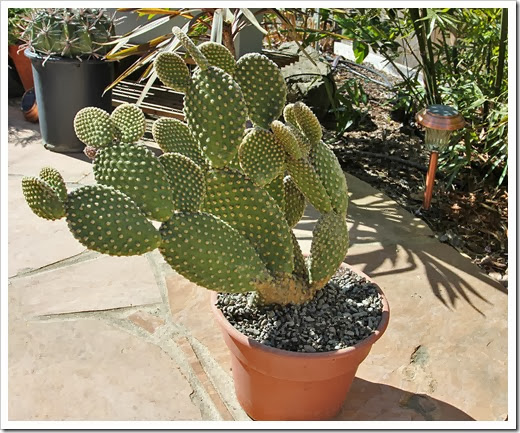 Repotted in a 10-inch pot. The plant is leaning at a rather raking angle. That’s how it grew, but I’m tempted to adjust the root ball so the plant’s position in the pot is more upright. 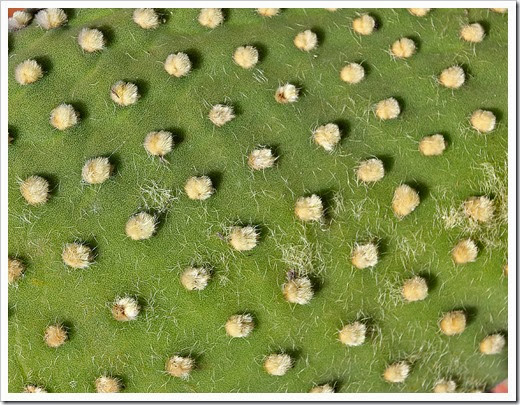 Close-up of aureoles with bundles of glochids, the very fine hairy spines that cause discomfort when stuck in your skin. In the photo above, you can also see many loose glochids that got dislodged during repotting. 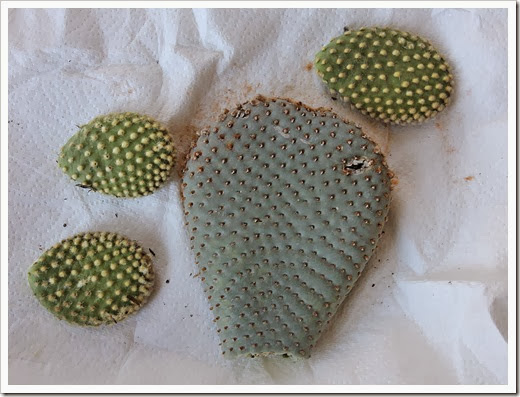 While I was repotting the yellow Bunny Ears, three pads fell off the plant. I will let them callus over for a week, then stick them in dry cactus mix. They should root quite readily. The much larger bluish pad is from a Beaver Tail prickly pear (Opuntia basilaris). Somebody (not us) had knocked it off a plant in a public place we visited, and I decided to rescue it.

In addition to the white- and yellow-spined varieties I have, there’s a variety with cinnamon-colored spines called Opuntia microdasys var. rufida. It has a particularly charming common name—Cow Blinder—presumably due to the fact its glochids can cause blindness in cattle. I have no idea if that’s true or not, but I love how descriptive the name is (just like Horse Crippler for Echinocactus texensis).

Opuntia microdasys hails from Mexico and is hardy to 20°F. As long as I keep it dry, it can stay outside in the winter in our climate.

Note: Other prickly pear species, especially the ones from the western and southwestern states, are far hardier. For example, Opuntia debreczyi—native to Wyoming, Colorado and Utah—is supposedly hardy to zone 3!