What’s happening to my tower of jewels?

No, I’m not talking about a private body part :-). The tower of jewels I’m talking about (Echium wildpretii) is a stunning plant from island of Tenerife in the Canary Islands off the coast of Africa. It grows natively at elevations just below the tree line on Mount Teide, the third largest volcano in the world and at 3,718 m (12,198 ft.) the highest point in the Atlantic Ocean. 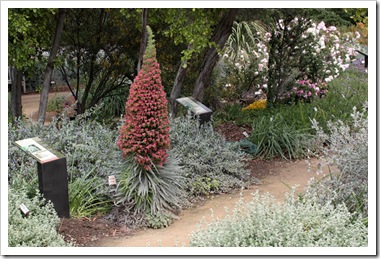 Growing conditions in the wild are sunny and dry, which makes Echium wildpretii a natural for our climate. In fact, it is a celebrity plant here in Davis, having being featured several times in our local newspaper. If you’ve ever seen one in bloom, you’ll understand why. In the second year of the life of this biennial plant, a flower stalk up to 7 ft. tall rises from the greenish gray rosette of fuzzy leaves which itself is as much as 2 ft. across. The spike is covered with many hundreds of pink to red flowers which attract bees and birds alike. After the flowers have gone to seed, the tower eventually falls over and dies. However, due to the copious amounts of seed produced, a new generation will soon come up.

These were my expectations when I planted a tower of jewels in our back yard in the summer of 2009. The plant was small—it had come from a 4-inch nursery pot—but it grew steadily. I was a bit surprised when it didn’t bloom this spring since, technically, 2010 is the plant’s second year of life. However, the leaves continued to grow, and in the summer the rosette looked like a sculptural masterpiece.

I was convinced that growth would simply continue until next spring when the bejeweled flower spike would magically emerge from the leaves.

Last week I noticed that the leaves had gone limp seemingly overnight as if the plant were dying of thirst. That certainly couldn’t be the case, considering that our tower of jewels, though drought-tolerant, did receive supplemental water and is planted in heavily amended loose soil where it had been happy for over a year. Nothing had changed, except its will to live. Maybe its internal alarm clock had gone off, signaling the end of its life. Since it’s a biennial, it’s only supposed to be alive for two years. But then, it’s also supposed to flower and produce seed to keep the cycle going. I'll probably never know caused the demise of my beloved tower of jewels, but looking at the drooping mess makes me sad.

I do have an ace up my sleeve, metaphorically speaking. I have a 2nd tower of jewels in our front yard. It was planted just about a year ago and is smaller than the moribund one in the back yard. But the leaves have had a growth spurt lately so maybe this plant will flower next spring. I’m an eternal optimist when it comes to gardening!