If it sounds too good to be true...

“Once upon a time,” isn't that how all good stories begin? So let's start this one the same way.

Once upon a time, my wife gave me a pair of agave ornaments as a gift. Made of rusting metal and spray-painted with color accents, they're a striking presence: 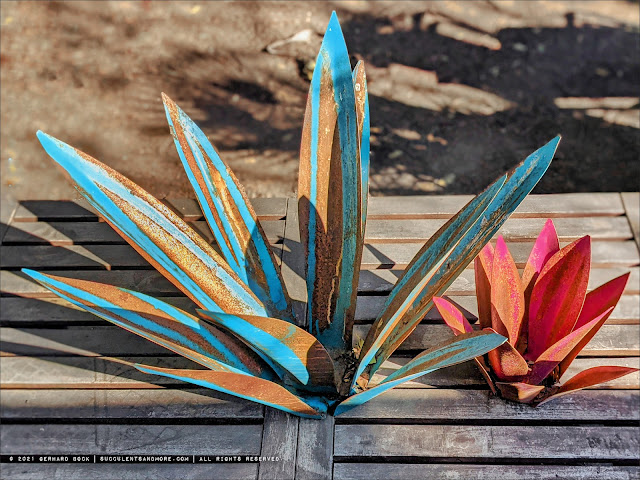 A friend of ours was very taken with them and wanted his own. My wife referred him to the Etsy store of the artist where she'd bought mine, and that was the end of it.

Actually, no. That was just the beginning, as we were to find out later on.

One day, our friend—let's call him Gull for “gullible”—came across an online ad on Facebook for metal agaves that looked very similar to mine. Very similar. But the price was a fraction of what my wife had paid. In fact, you could buy three agave sculptures for the same price, with free shipping to boot! This felt like a cosmic gift to Gull so he went ahead and placed an order. Delivery took months, but the box finally arrived.

But let's pause here for a moment because I, too, have seen these ads on Facebook now. I don't know how Facebook's algorithms decided to show them to me, but one day they started to pop up. Here is one: 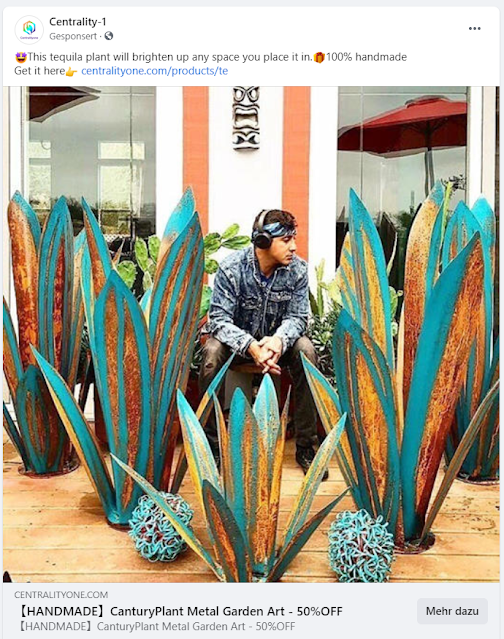 Needless to say I clicked on it to see what it was all about. After that, my Facebook feed started to fill up with more and more of them: 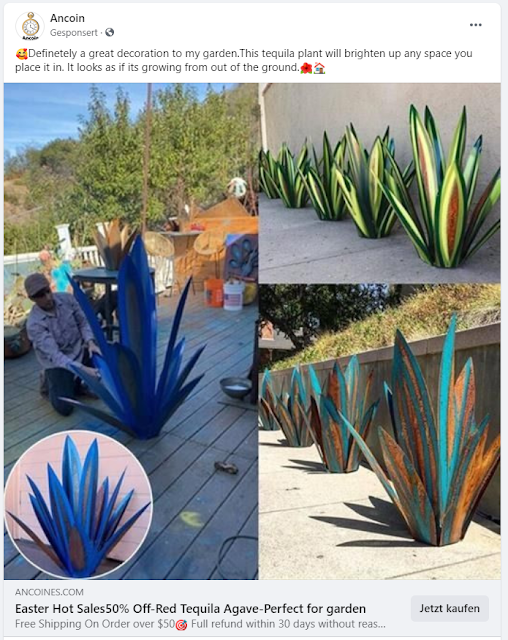 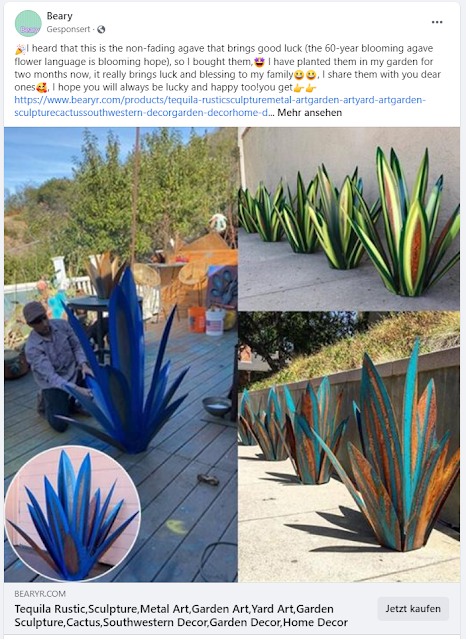 USA Owned and Operated! Fast Delivery! Satisfaction Guarantee! And authentic!
Another store, “Ancoin,” goes even further with promises of immortality and endless fun: 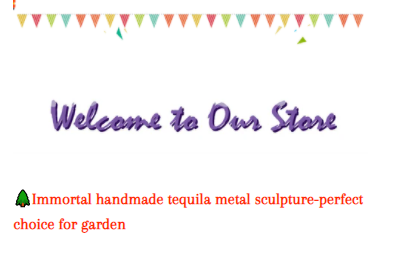 In case you had any doubt, they are made of metal: 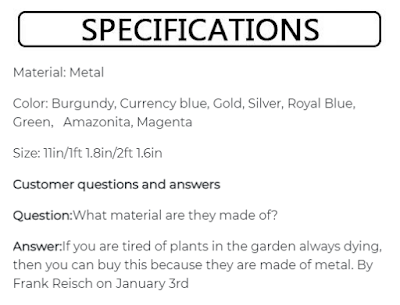 And look at the price for something so authentic! genuine! immortal! fun! metal! hand-made! Even better: the more you buy, the cheaper it gets. 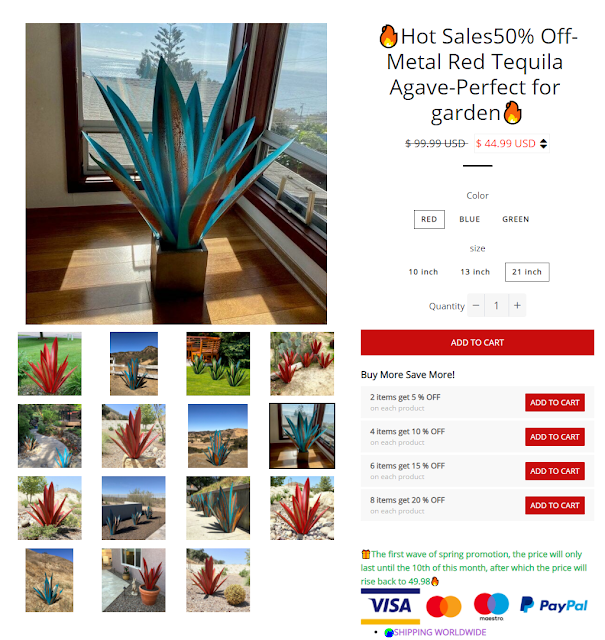 If you try to leave the store without buying, you get an even sweeter deal:

In light of all that, you'd have to be superhuman to resist. I, for one, can't blame our gullible friend Gull for getting in on the action.
OK, back to where we left off. Gull's box finally shows up, from China no less: 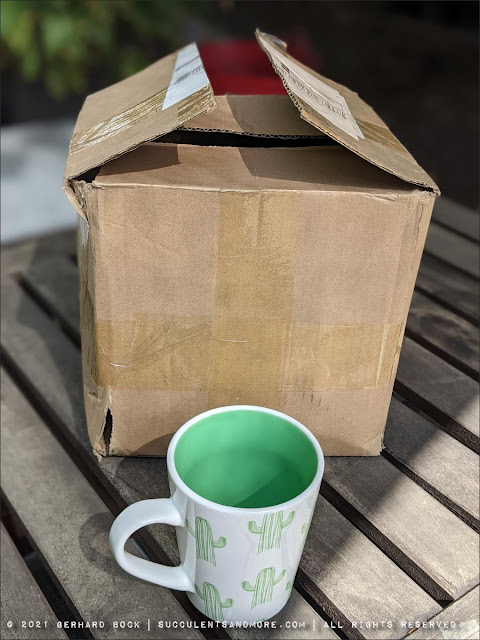 It looks a bit small, considering the agave sculpture he ordered is supposed to 21 inches tall. Maybe the leaves fold in the middle even though in the photos they look like they're all one piece?
After Gull opens the box, he's initially confused, then relieved. This isn't his agave sculpture all, but something else. But what? 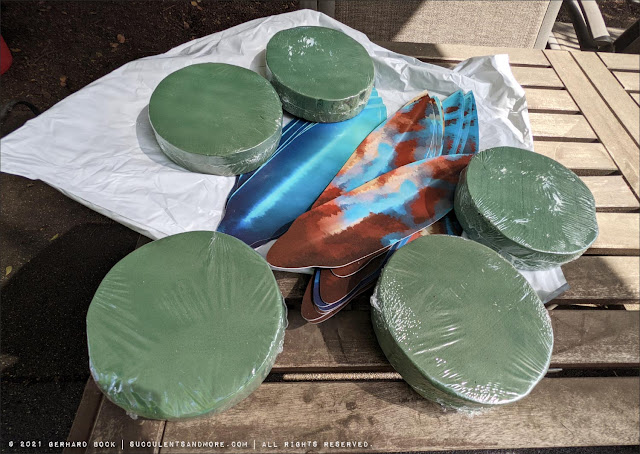 He has no recollection of ordering anything that might match this, whatever this is: 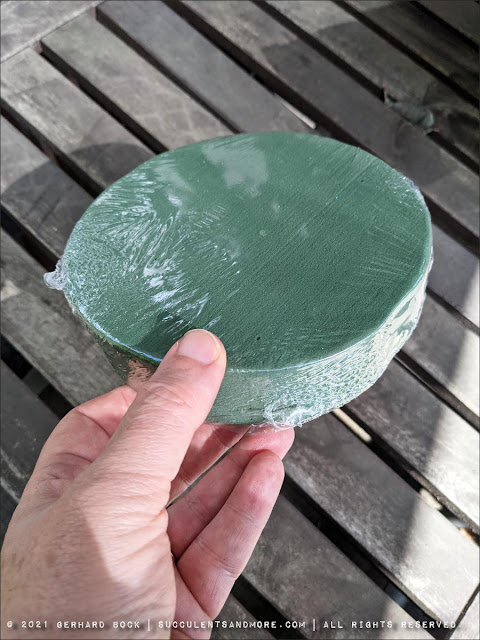 It looks like the kind of foam cushions florists use for flower arrangements.
And this? 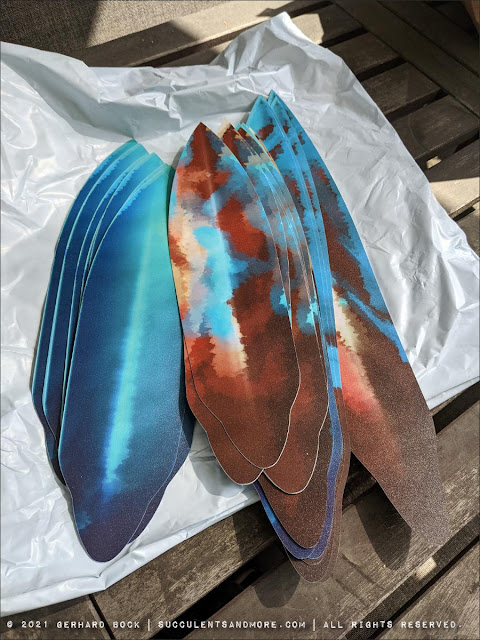 WTF?
Slowly, it's beginning to dawn on Gull. He's been scammed.
Gull brings the box and its contents over to our house, and we figure it out. The foam round is the base of the agave, and the plastic “fins,” for a lack of a better word, are the leaves. Duh! It's a do-it-yourself project! Immortal fun, one might say! 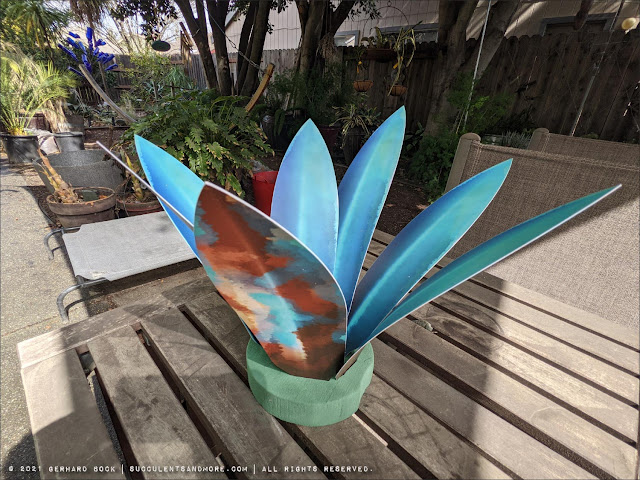 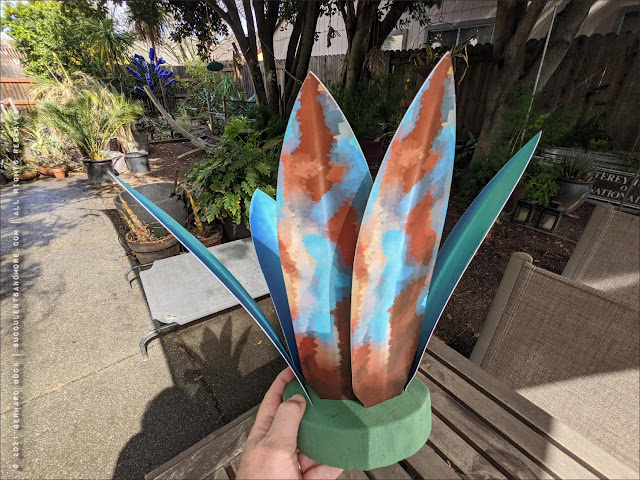 At least the scammers were generous. There's enough material for five agaves!
Here's the fake and the real thing side by side: 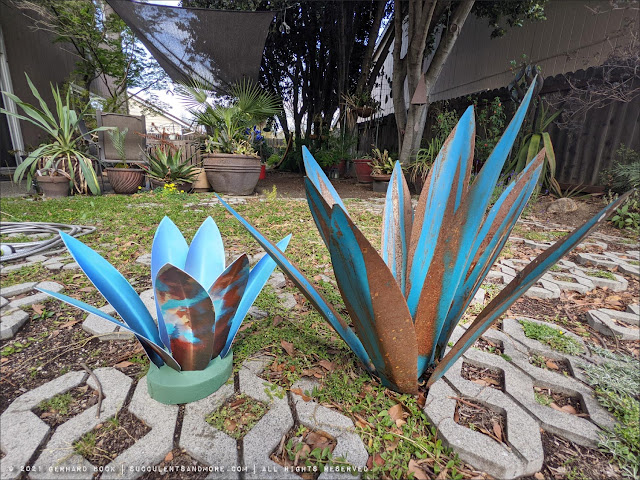 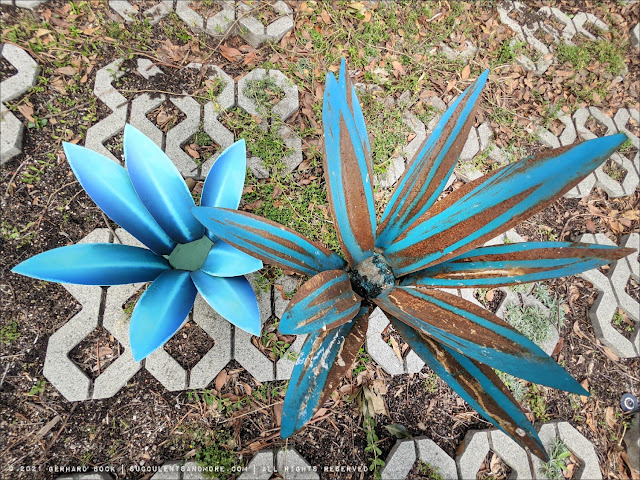 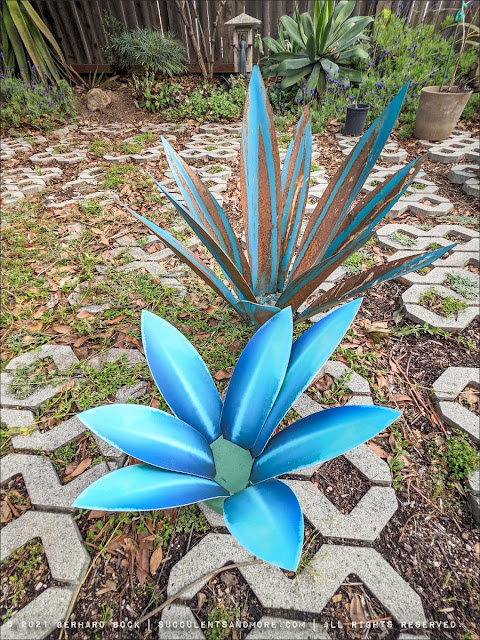 Gotta love the ingenuity behind this scam! 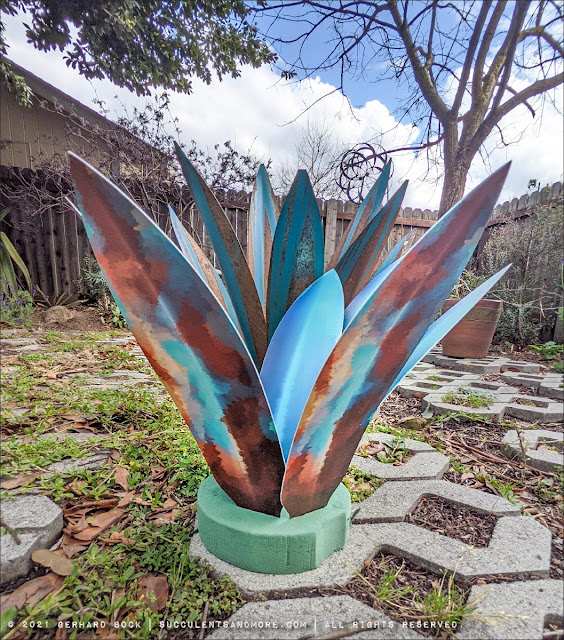 It may not have been exactly what Gull had expected, but it made for a good laugh.
For Gull, there's a happy ending. He filed a claim with PayPal, and within an hour (!) he received a full refund. PayPal must be aware of this particular scam. Who knows how many others fell for it?
But there's one more victim, arguably the biggest one: the artist who created the metal agaves and whose images and intellectual property were stolen for this scam. His name is Omar Wysong, and he sells his work through his website, Topanga Patina Art, and through this Etsy store. All pieces are handmade in his workshop in Los Angeles. Wysong does honest work at an honest price, and I feel bad he was targeted by these scammers. Based on this notice on his Facebook page, he's aware of the scam: 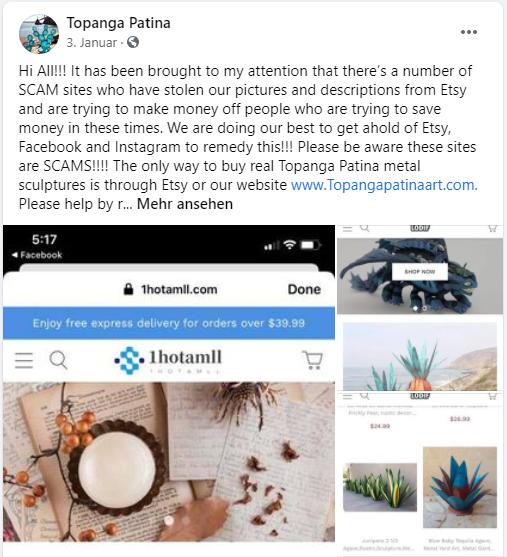 If you like metal art in the garden, take a look at Omar Wysong's Etsy store and buy from him. Don't be like Gull—if it sounds too good to be true, it is.
As for the foam-and-plastic agaves, they're pretty much useless, seeing how even slightest bit of movement makes the whole thing fall apart.