- August 08, 2020
Queen Victoria agave (Agave victoria-reginae) is arguably one of the most beautiful and therefore most popular agaves. There are many different forms:  the all-green standard form with a varying number of white markings; several selections with yellow variegation; and a few clones with white variegation. The latter are quite rare, and hence highly sought after.
One of the white-variegated forms is called ‘White Rhino’. It has off-white stripes on the outside and green in the middle. (A form called 'Mediopicta Alba' has the reverse: white in the center, green along the margins.)
I bought a ‘White Rhino’ offset a number of years ago—seven? eight?—and it's grown slowly but steadily. A speed demon it ain't, but few agaves are.
On the upside, my ‘White Rhino’ has produced a handful of pups, and I finally decided to remove them so they can start life on their own (and hopefully make their own babies eventually).
Here you can see some of the pups: 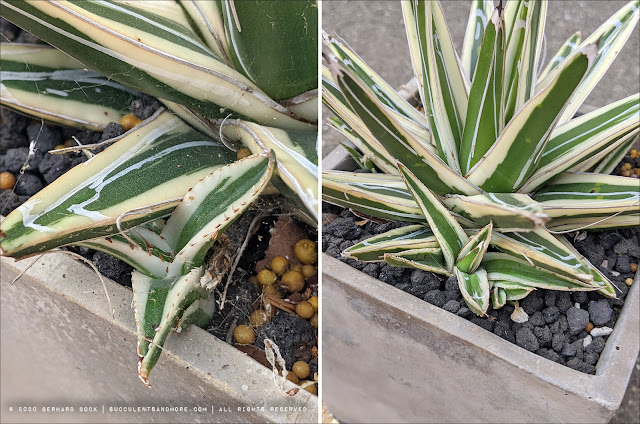 The only safe way to remove the offsets was to take the entire plant out of the pot. I had to run a bread knife along the inside of the pot to dislodge some roots that had attached themselves to the sides, but after that it was easy to pull out the root ball.

Then it was simply a matter of gently pulling away the pups. Here they are after separation: 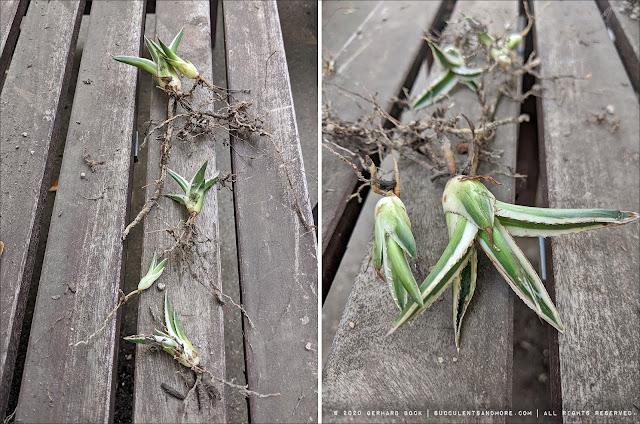 And potted up individually: 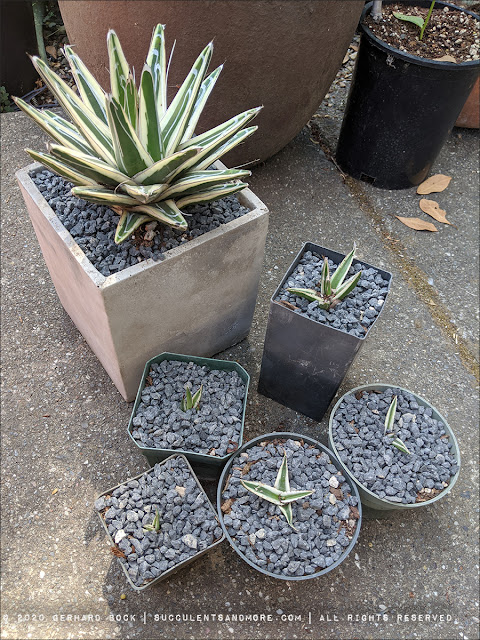 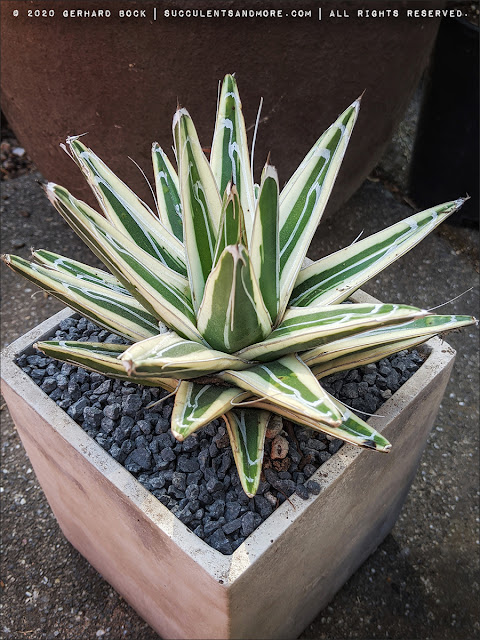 The pups will receive some extra TLC to help them get off to a good start. I will mist the small leaves several times a day for three or four days before I give the pots a light watering. The last thing I want is for the young 'uns to fall victim to rot.
© Gerhard Bock, 2020. All rights reserved. No part of the materials available through www.succulentsandmore.com may be copied, photocopied, reproduced, translated or reduced to any electronic medium or machine-readable form, in whole or in part, without prior written consent of Gerhard Bock. Any other reproduction in any form without the permission of Gerhard Bock is prohibited. All materials contained on this site are protected by United States and international copyright law and may not be reproduced, distributed, transmitted, displayed, published or broadcast without the prior written permission of Gerhard Bock. If you are reading this post on a website other than www.succulentsandmore.com, please be advised that that site is using my content without my permission. Any unauthorized use will be reported.
agave agaves offsets